As the balance mod matures after 2.5 years of development, this new update took some time to focus on bug fixing and improving user experience by correcting 29 incorrect or imprecise descriptions from the official version. It also refined the changes to True Resurrect brought by v1.25. v1.26 thus consolidates the role of the balance mod as an essential addition to AoW3 for all single and PBEM players seeking a better user experience and more balance. 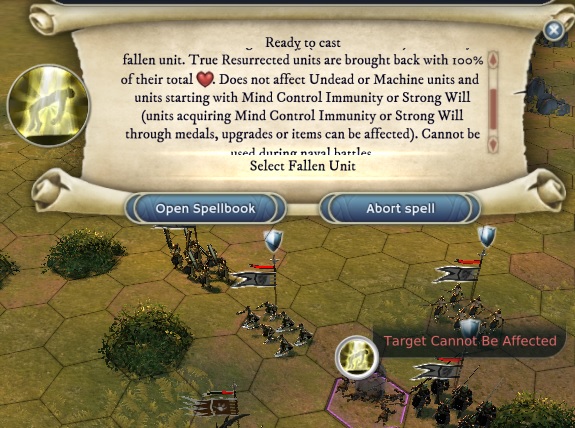 True Resurrect cannot be used on enemy units starting with Mind Control Immunity (here a Berserker) or Strong Will. It can still be used on units like Human Knight who get Strong Will through medals or other means (due to a technical limitation). Enemy units thus acquired get +25% upkeep cost.


An attempt to fix the behaviour of Twisting Roots to prevent it from affecting heroes and Leaders who gained Floating through hero upgrades and Apprentices gaining Floating through medals did not fully succeed and is delayed to later versions of the mod.

v1.26 was released about 3.5 months after v1.25 on the beta branch of the balance mod, but its release on the main branch has been pushed back by a couple of months due to delays in round 1 of the 2018 PBEM 2vs2 Tournament. The pace of releases of the mod should be maintained at about 1 update every 3.5 months.

In early 2019, v1.27 will deal with item reclassification (priority #11 or "Decrease rewards or increase risks for high-level sites" based on the poll on the opinion of the community on balance), some preliminary Floating/Flying balancing, and further boosts to Engineers.
It is hoped that v1.28 will tackle some tactical AI issues, in particular regarding the casting of useless spells in scout wars (e.g. Great Reawakening cast in 1vs1 battle where it cannot have any effect).
Work on "Further balance 'leveling and mind-control' vs 'production' (reducing XP counters for T3 and T4, boosting production classes and/or increasing upkeep further for mind-controlled units, etc.)" and "Make non-summon strategic spells more interesting" still need to be started (priorities #4 and #5 respectively).

Full changelog of v1.26 (also available on the official changelog of the balance mod)
Bug corrections
- Combat Summon Spiders from the Shrine to the Spider Queen no longer give CP through Essence Harvest

Issues/bugs of the balance mod corrected:
- The targeter of Flash Bomb is modified so that units using it won't move and target empty hexes any more
- Flash Bomb no longer drain MP of units that are already Blinded
- Healing from items (Feathered Serpent Warbonnet, Robes of the Ancient Priest, White Pouch of Potent Herbs) no longer stacks with the Healing abilities of Arch Druids and Theocrats
- War Anthem now give -100 morale and not -400 when resisted.

General
- True Resurrect cannot target the cadaver of enemy units which have Mind Control Immunity or 100% Spirit protection at Recruit (does not apply to units which acquire it through medals or buffs) and gives "Mind-controlled" to enemy units it resurrects (+25% upkeep) (Greater Resurrect, 25CP working only on allied units can still work on MCI and does not give Mind-controlled).
- Kwapa starts with Swimming (was 2 free UP), Falenas starts with Fel Horse (was 2 free UP), Nashac starts with Free Movement (was 2 free UP).
- 29 descriptions and Tome of Wonders pages are updated to correct imprecise or incorrect descriptions. Full list = change GC48a here: https://docs.google.com/spreadsheets/d/1eVOyD2rdiUb4PytVhaKT1rxNiWMquRAlnXw587VwBpg/edit#gid=0

Among the 18 descriptions updated, two Tome of Wonders entries with incorrect information were corrected (Terraforming and Void)

Always wondered why Transform Mana Node spells say you will get +10 mana and you only get +5 mana? That's because it was an incorrect description in the official version, now corrected thanks to the balance mod