I wanted to write a longer report, but this game was quite straightforward, if you dont count Hiliadan sneaking up and taking 2 of my cities and destroying a fort. But by doing so he overextended and ultimately lost his leader and throne.


To say he make a mistake is perhaps too much, as the only way to catch him was via a Warlord and DM or Monster Hunters (MH) with 40 mp, thats 13 hexes for dwarf or Goblin UG (where he paid the ultimate sacrifice).


Dreadreapr had a FANTASTIC game, i can go as long as in this settings he would beat almost any player. From turn 10 and onwards he produced MH that eventually end up with  17 def and 14 res (better than all t4 at elite), almost unkillable at elite (unless you use DM and face another Warlord with DM that outnumber you

)as I have no chance killing a WL in late game.

GG and good luck, albeit I dont agree with the losers journey (and i got that in as well!)


EDIT: And the game could have taken another turn if Gladis fight ended different vs me: 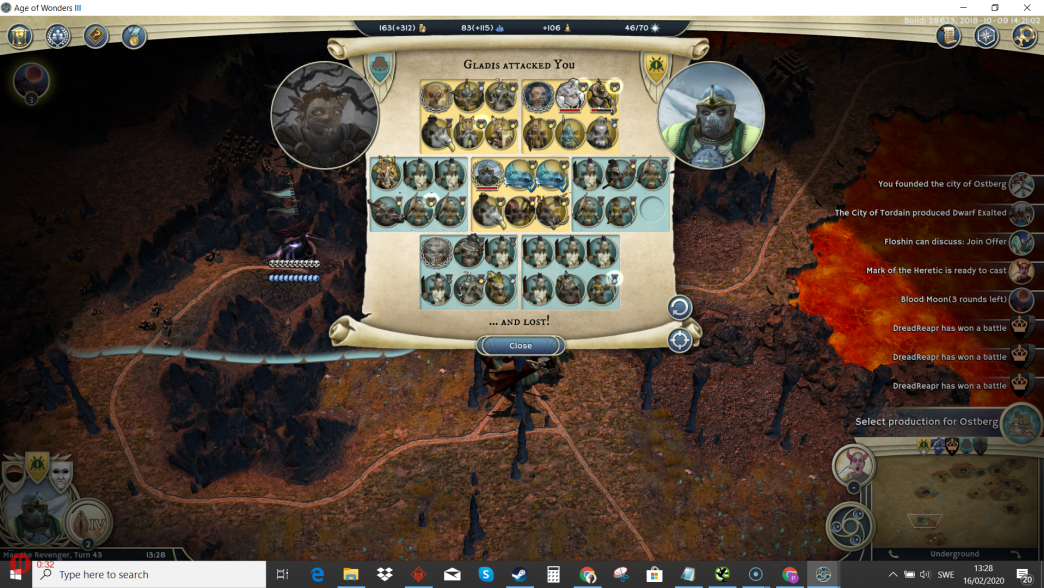 I guess the Limit is the Players listed in the game.

But itÂ´s strange you have to fill in the number of human Players - because the site should know that we 4 are human Players, there isnÂ´t an Option to fill in AI anyway??

And Mark, please add that info in the report menu at least.

What is the weird 1st column in the report set-up? Are These the number of Players, I switched to 4.

But I have no single idea what it is? Does anyone knew?

Mark, what is this?


BTW the only player not to lose his leader, as far as I know, Gladis

I havenÂ´t had any army there xD no Action at all, just surrendered.

EDIT: I see we posted a few seconds apart - GG

@Gladis, 1 turn in the next 58min or yours are last turn and you must take screenshots etc.

Would be quite amazing if you did take Dreads capital and eliminate him (in terms of the "potential outcome".) 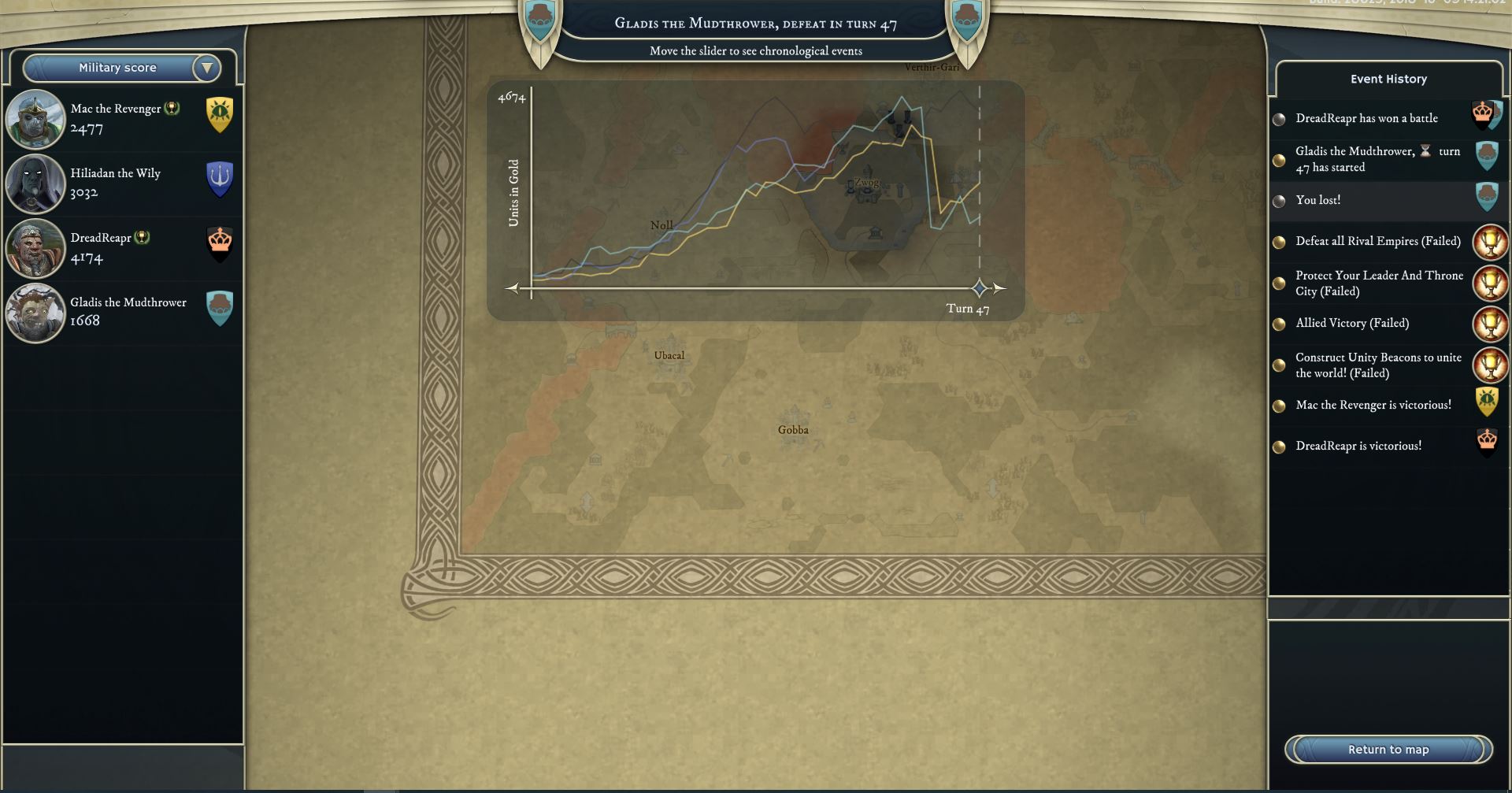 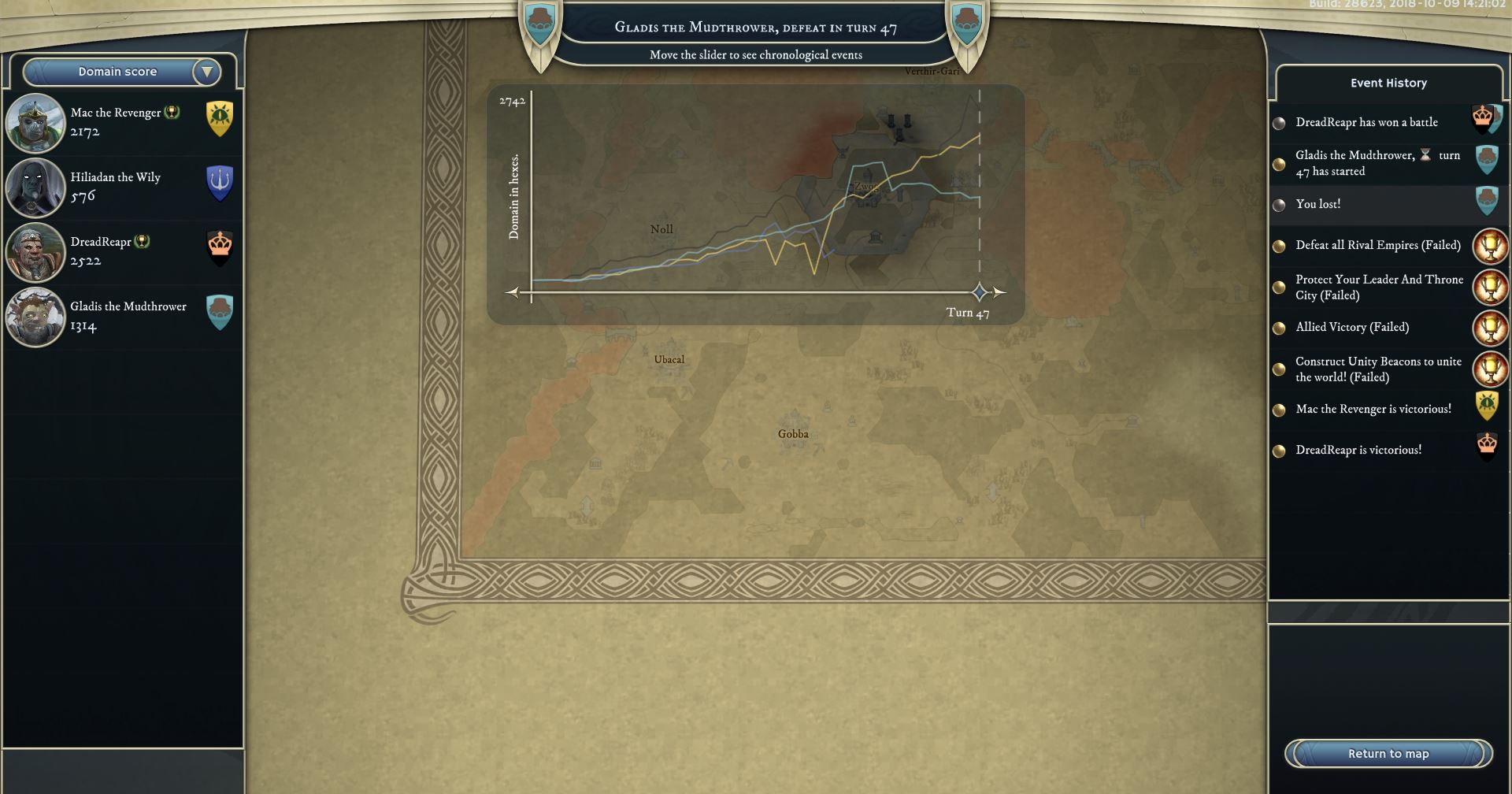 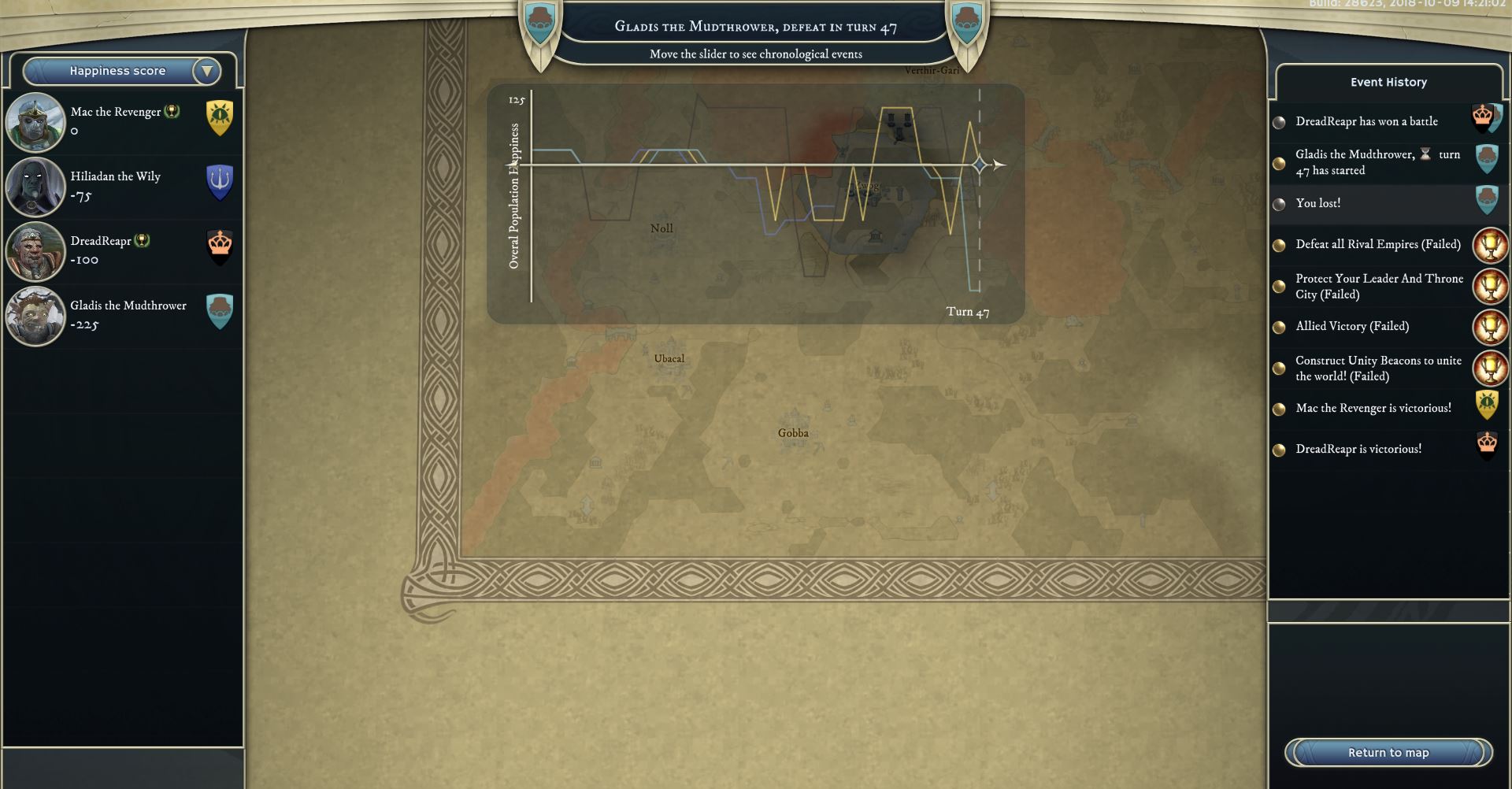 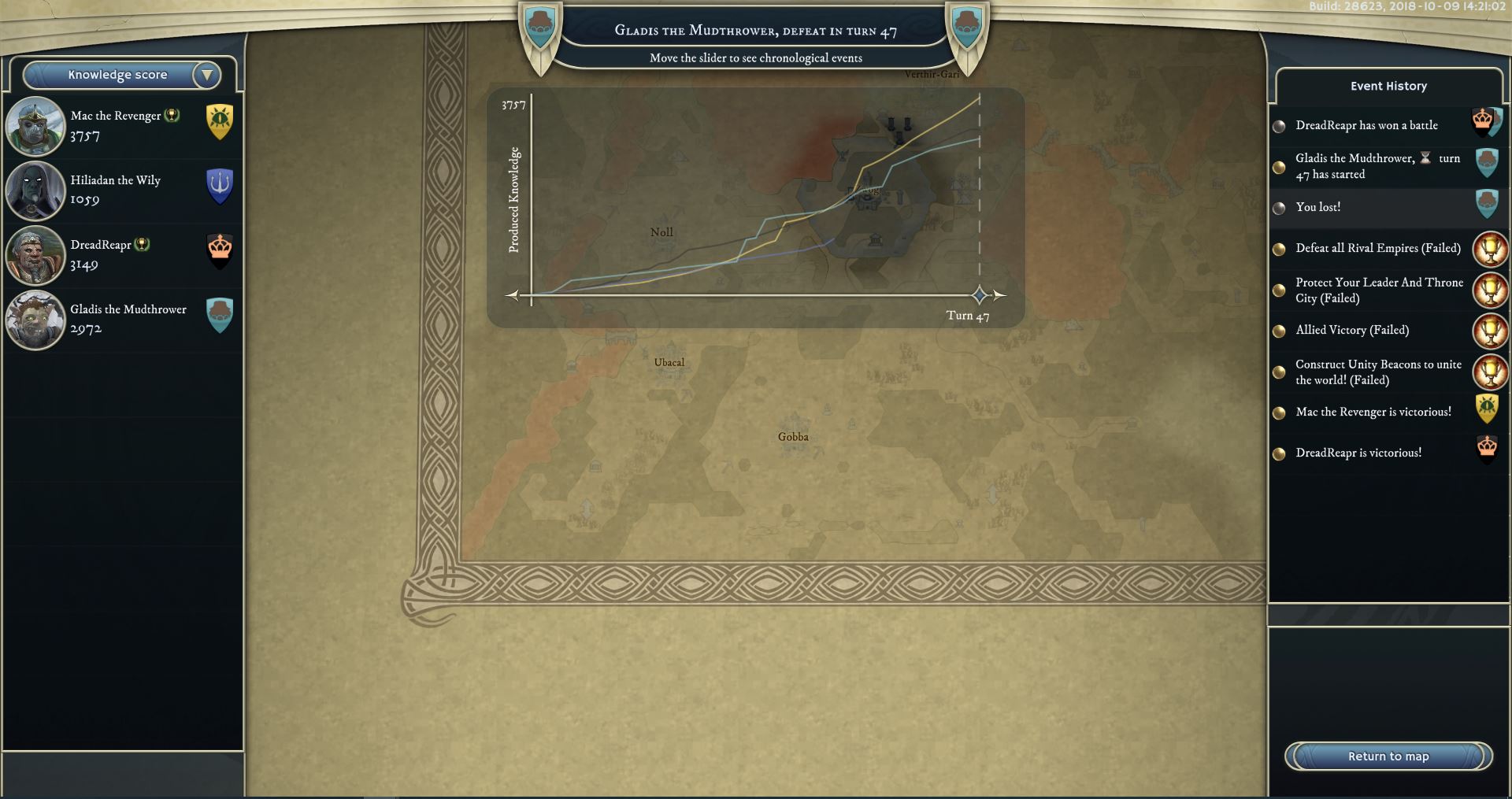 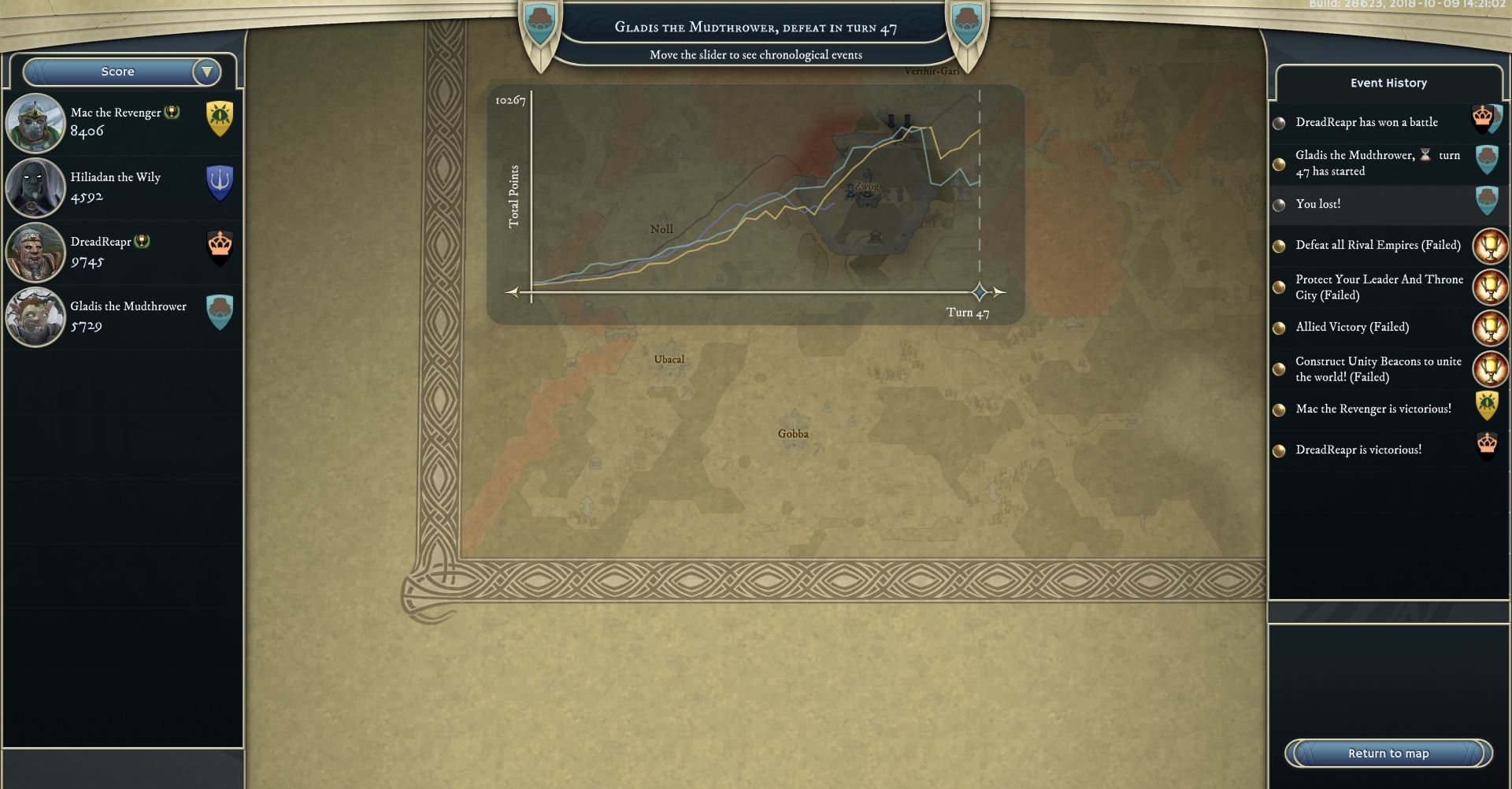 Yeah a lot of work and got ill too. But the delay isn't a problem for your team so I didn't care

Think Gladis was unavailable but didnt post anything here.

You can play on for anther week.

Despite the rules and time restriction, lets try to continue in this pace and give the game a chance to finish properly.

2 times in my turn i got a freeze, didnt touch anything and game came back.

i do not have enough net quota to upload videos for now, i have to wait 1-2 weeks to renew my internet data

Gladis recording showes the crash, so itÂ´s a warning with proof. Please record the turn and make it availible to us. You can play on.


Dreadreapr, i have to remind you that you please send the links to your recorded turns after your crash, as was instructed.

i assume that was a joke gladis ?
anyway about the judge decision: losing teams in losers brackets play against each other => play vs retromancer/mahimka:
it's clearly unfair bcz the 2 losing teams will have to lose 3 times to be kicked from the tournament while other teams only 2 times, why wouldnt Reckless mortal team get a free win in winner brackets ?
Published on Thu, 13 Feb 2020 22:39:45 +0100

The ugly Goblin isnÂ´t dead yet!

I'll release videos starting on turn 13 (forgot to record earlier) in the near future (I don't have wifi any more and might get it only in 2 months so we'll see how I upload those big files!).

How Long will the round last? I hope for enough added time, this game shouldnÂ´t be decided on Points (well, depends whether the restarts would cost the enemies enough points to loose

thank you for your patience. Dreadreapr, the logs are no sufficient proof so itÂ´s a warning without proof. ItÂ´s unfortunate since you recorded the video but the mp4 format is damaged due to the shutoff. One suggestion: use the FLK format, itÂ´s viable even when crashes. It should be somewhere in the settings of your recording.

Please record the next five turns and make them availible to us. I want to point out that you have to do exactly the same moves as before. We took into account that it is a critical phase of the game and hope you donÂ´t use any information you got before the crash.

sent now and by the way there was only 1-2 battles against hilidan solo crows, nothing more

Hm, i did send to below mentioned email and worked out fine.

Dreadreapr: Sadly, you got the wrong adress. Please send the files to dr.colossus@gmx.de.

jonny hasnt replied yet by the way

as expected, after electricity switch my laptop instantly turned off while playing my turn bcz my battery is broken. i sent log files to jhonny via email: dr.colossus@gmx.net

Thanks for quick ruling, sending link to video in PM.

Alright, itÂ´s a warning with proof for Marcus. Nevertheless, please record the next three turns and make it availible to us.

edit to change from team to all

Alright, please revert the turn to be able to play the missed turns due to server downtime.

12h left on timer, will do my turn tomorrow morning if the timer is not removed

Seems serves are up and Gladis did miss his turn because of inability to reach the game and Hiliadan likewise couldnt log in and remove turn timer.

I vote to revert the turn, if I remember correctly we have a ruling in previous games that support this.

edited to remove team only

Are you serious? Well, loosing a turn isn't such a great deal. It's like starting 2nd in a duel like Hili said. But wait, I am already in 4th place. Don't mind of skipping more turns, I'm not eager to continue anyway

Alright, you can go ahead. Jonny