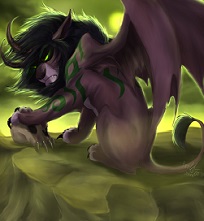 Well , im fine with it not being for any ranking points ,  somebody just explain how to change that

Agreed, should be changed to w/o ranking.

Need an admin or original reporter to fix that.

I thought we even said it is w/o ranking...

Is there a way no remove the ranking?

Even though the victory was very concise it was clear that the evolving unit (legendary units) mod was unbalanced/unfair in that a lot of T3 units didn´t evolve and each player was not guaranteed starting with such a unit.

I started with two T3´s which was ranked up a lot but did not grow into T4 units.

Mod Games shall be not ranked. Or we have an own ranking for it.

Are we seriously reporting this game, ppl?
Should we start reporting all of the modded games we've won so far, then?

I can't write a detailed summary because most of me recordings and screens are lost. Especially the ones from the early and mid game. The game was lanched with strong starting units, a lot of ressources and very heavy defenders. I've had a really good game (except losing my first hero around turn 12) and after I evolved my t3 pikeman (starting unit) and got a firstborn as reward for my first quest I was able to clear heavy sites. Key site was a dungeon I could clear quite early where I killed 4 manticores and other stuff around turn 15 I guess. I entered it with the regrowth buff and eveloved the t3 pikeman and the firstborn a few turns later to t4. With 2 t4 units I was able to clear nearly all sites without reapers and did so.

I took a straight way through the UG (from west to east), converted an eagle rider (and evolved it to t4), a human hag and some other units. I must stop converting in due to my low gold income and the loss of my throne. 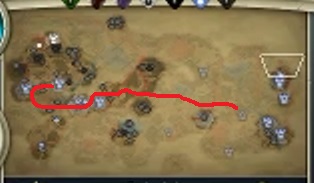 I could have done even better in this game but I left my throne undefended and somehow a warg manged to slip through our scouting network and took it. I couldn't reach my throne within 2 turns because one hex was missing. This cost me a settler one turn before it was produced, happiness and most of my gold income. There was a time where I was at -200 gold income with just one city. I was forced to clear every site on my way with my main army.

My throne was razed and I couldn't produce anything for a lot of turns. Since I gave 300 gold to Seer at the beginning of the game it was pay back time and my team mates supported me with some gold, rebuild my throne and gave it back to me. Meanwhile my main army got stronger and when I entered AIX realm around turn 21 or 22 I've had 3 elite t4 units and the dwarven t4 have had about 160-170 HP. My leader reached level 11 but we played with the mod where you need way more experience to level up your heros. If I remeber correctly the leaders of my team mates have reached level 7 at this time and the enemy heroes we scouted so far were even weaker.

AIX did a mistake trying to defend with a much weaker army in the city where the red line ends. He could have given up the city and then defend with 3 stacks an a bridge in front of his throne where I could have attacked with only one stack. He didn't and lost his leader in that fight but sadly #metoo ^^ (mine could have survived with 2 more HP) and I lost the t4 eagle rider. Anyways my army was still very strong and 2 turns later I took AIX throne while his leader was in the void.

After taking AIX throne I moved south and spotted an army from Gladis. He had much more units than me but mostly t2 units and with my 2 remaining dwarven t4 units I felt quite confident to win the fight. I won but lost some units so I decided to retreat with my remaining 5 units. Since Marcus and Seer have had time to build their economy until that point the game was decided. In turn 34 Marcus attacked from the center of the surface and won this fight... 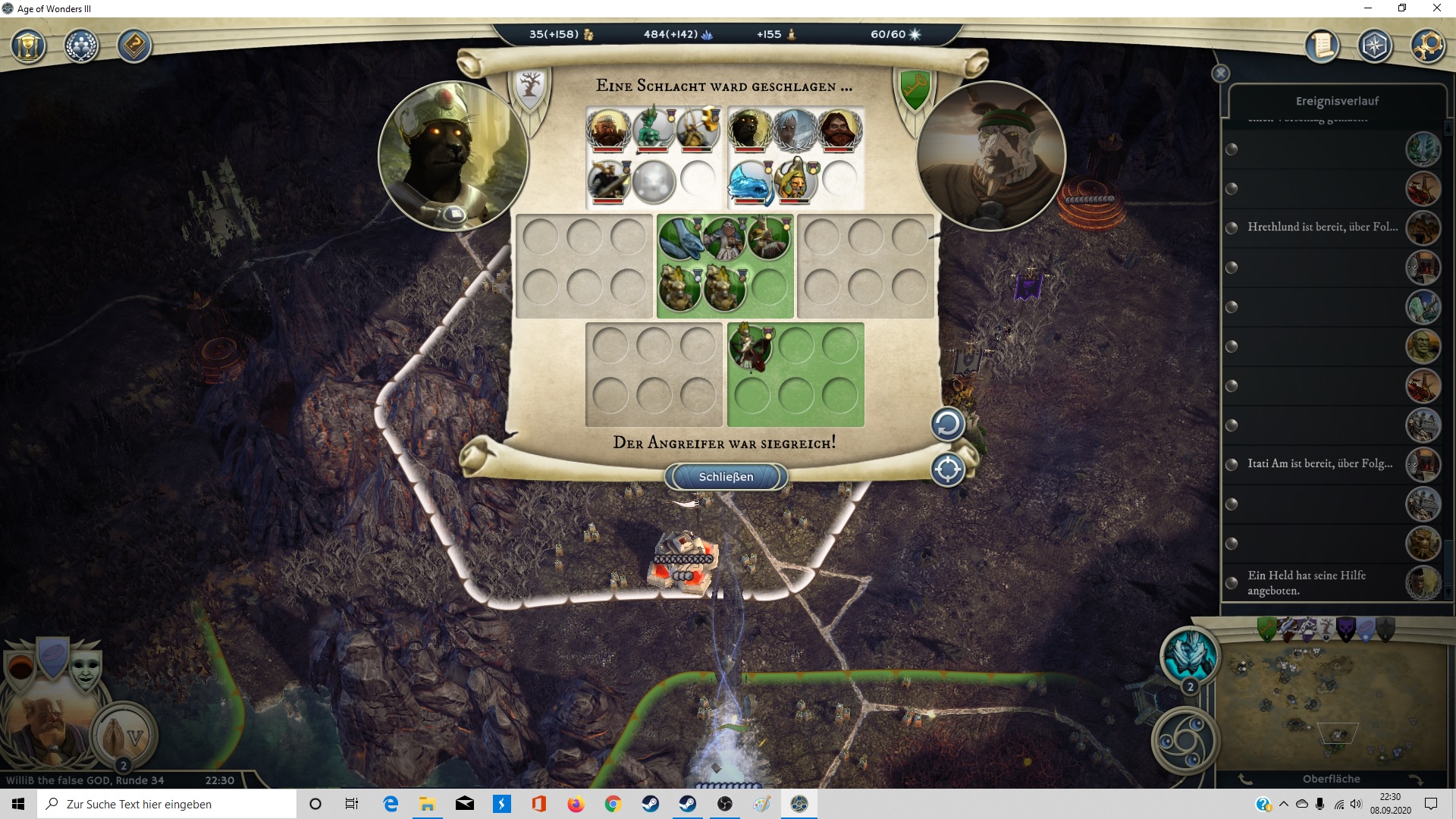 4 turns later the game was over. Thank's for the game!

Good game boys , a lot of mods to load for a game but hey we live on the experimental side for my annual halloween games ,  i will open another soon as haloween approaches again soon , this one took less than a year i am suprised so much map left unconquered......nice job lobo on the early elimination that led to their ultimate downfall ,

if any have questions regarding all the mods used , or opinions please post them here i am curious for the feedback as i start planning this years version

Yeah I feel sorry for Eskild. I came home that night in a bad mood and the game didn't help. I though he will surrender too, because the game was decided.

ATTN GLADIS , your choice to abandon this game after exit has caused me to LEAVE THE GODS OF WAR TEAM

this stupid damn website will not allow me to ressurect the DoW ( Dogs of War ) team at present but i will endeavor to recreat half of my old "Hawks"......hopefullly we can get some good clan 4v4 going sooon ?

ok i need another beer

since yesterday my notebook refused to boot. I am not sure how fast I can solve the problem or if I need a new one. Can't say if it will take a week or month until I am able to play again... :-(

I'll let you know when I am able to play again. Sorry for the inconvenience!

I am on holidays until the 13th of august and won't be able to play my turns until then. Sorry for the inconvenience.

I did the best thing in this stupid game and surrendered. It`s just ridiculous unbalanced

If not everybody startet with an evolving t3 then it's really unbalanced. I took theo not for converting because I havn't got any evangelist right now. I took it in due to the massive healing what is even more important with these super strong defenders. ;-) AD would have been an alternative of course.

No, I had a Sheriff and it doesn't evolve. My vassals didn't offer a T3 and another city offered a special T3 which likely wouldn`t have evolved.

But the quest failed because a teammate bought favour with that city one turn before I would have acomplished the quest, so...

I think it's very important whether you start or get such a racial T3 then.

And MC strategies are even better then like you proved. Because producing Racial T3 is costly as we know^^

Havn't checked that but all players started with a racial t3 unit and could evolve it, right?

Aaand I bet the Eagle Rider lost his Mind controlled unit status, too...

So this mod (or these mods) lead to big unbalances

I was just lucky and first I did not even notice that the thane evolved. The icon looked strange so I checked the unit and was really surprised it evolved. After that I checked all my units if they can evolve and the firstborn I got as reward from my first vasall could get to a t4 as well. Same thing with the eagle rider I converted with my leader.

Well, I've played my turn, so you can continue.

That said, I'm very much interested in the legendary units mechanics - mod is not descriptive, and although I had few T3 units that ranked up to champion medals (even more than once), none of them evolved. I assumed only vanilla legendary units can become legendary, but seeing dwarf thane, that is clearly not a case. So, I guess congratulations on exploring this in advance, Lobo

I think the game is far away from being over. Have seen a big army at the surface where I harrassed a bit with my hunters and of course there are some units coming to AIX's realm. Imo too early to throw away the game.

Can we end this game quickly?

Btw in one week I will be on a one week trip.

It's the Racial Heritage Mod:

Yes, I can confirm this. It's a really nice unit in manual battle but the AI don't use their real power when just attacking with their melee strike.

The unit 'Human Hag' seems to be broken.

It never uses his Ranged attack. Makes it really easy to kill.

$eer, can you ask the creator of the specific mod?

I will be away from laptop from the 27th of June until the 4th of July. Cheers.