@Hiliadan   I think, you're right only on 70%. DrLight had a good chance to catch me there on his land. Especially he had a builder there to build roads

1. My starting position was right in left upper corner at UG. You can see there 2 cities which I had to raze (including my throne) to avoid you might took them almost unprotected. If I would know that you'll going to the east and not found them at all

I would save them))

2. The map was not so good for me. My vassal appeared so far from my throne. And there were 2 entrances to open my starting location from south and east. When we met first I saw your boar near the inn just before the ice land. I was scouting from the entrance which is locating on peninsula in left upper corner on your first screen. So I should stand at that entrance to be know when you'll appeare there to simply take my domain. Instead you were going to the north - and you're very lucky that there was a second entrance. I have to admit - it was too late when I found that you passed away from that location. So I started razing my cities too late and if you wasn't too slow and went to right direction you could take my first throne

3. I found out that you have cleared the inn near bridges before the ice land. And you didn't leave there any unit to protect it for the future reinforcements. Especially when you realized that you're near my domain. I think you had enough gold for buying T1 scouts or T3 units for main stack

4. You should know that very often the starting position is locating at the corner of the map. Especially if your own position is in the corner (almost). So you definitely shoudn't go to the east at UG

Anyway, you showed very decent game. I hope you'll take this lesson and in the future will beat not only me but such good players as mahimka, Jean or marcuspers

P.S. Yeap, to clear 2 dungeons without any losses is very significant to you

And I didn't realize that it were desperate brave steps from your side. Seeing that, I thought you were sure what you'd done

Is "Hunahe" the original Skuns throne? If so, it looks very unusual to be honest.
Looking at your throne position, I would expect his throne in the left upper corner surface or underground, north surface at most.
I would never expect the throne in the bottom left corner UG.

Based on your report and the scores, I would argue that your main mistake was not the loss of the AD (or the Theo) or going in the wrong direction, it was to attack recklessly and lose your troops when Skuns was around your Throne. You were leading in military score at that point, and if you had kept it that way, you would probably have won. Don't you think?

Thanks for the game Skuns, I really enjoyed it. Well played and well-deserved victory. I hope after this review I answer all those questions…

First of all, I had a very decent start, my strategy was focused on hunters, so I gave priority to the hunter improvement spell tree, rather than animal summons, that being said, I was hoping I could get some snakes or spiders, but I went many turns without summoning a single one, until eventually I got a dread spider which I evolved into a Queen.

All the other animals I sent as scouts, however, I had very bad luck keeping them alive, so they all got killed before I could find or even have an idea of where Skuns was. I think poor scouting is the main reason why I lost this game.

The route I took, I sent my leader with a hero north from my territory where I vassalized a fairy dwelling, was able to take some good structures, gear and level up, however, around let’s say turn 25~, by trying to take a Sphinx, I got my druid hero petrified and killed, which was very disappointing because it was already around lvl 8-9, so for a few turns, I stopped the important spells to try to get resurrect hero, which delayed my research on summons, which had already been stalled by upgrading my hunters.

Since I didn’t get rez hero fast enough, I just took a new hero and joined it with my leader, I think this was another Theo.

My main stack had about 9 units, hoping to get to 2 full stacks by the time I could hit Skuns territory, I marched north were I took 2 halls of the forefathers and then went UG through the northernmost cave.

In the meantime, my secondary party was a theo hero with a bunch of hunters that were clearing nearby sites. At this point, I still don’t know where Skuns is, and I know he may know where I am because I got the notification that he found me, so I decided to keep that party near my territory in case he showed up.

Needless to say, he showed up with 3 stacks disembarking, from what I assume was the cave north from my territory, I didn’t see this coming, because I actually had vision from both land fronts to my base. It gave me enough time to get my hero back to my throne though. 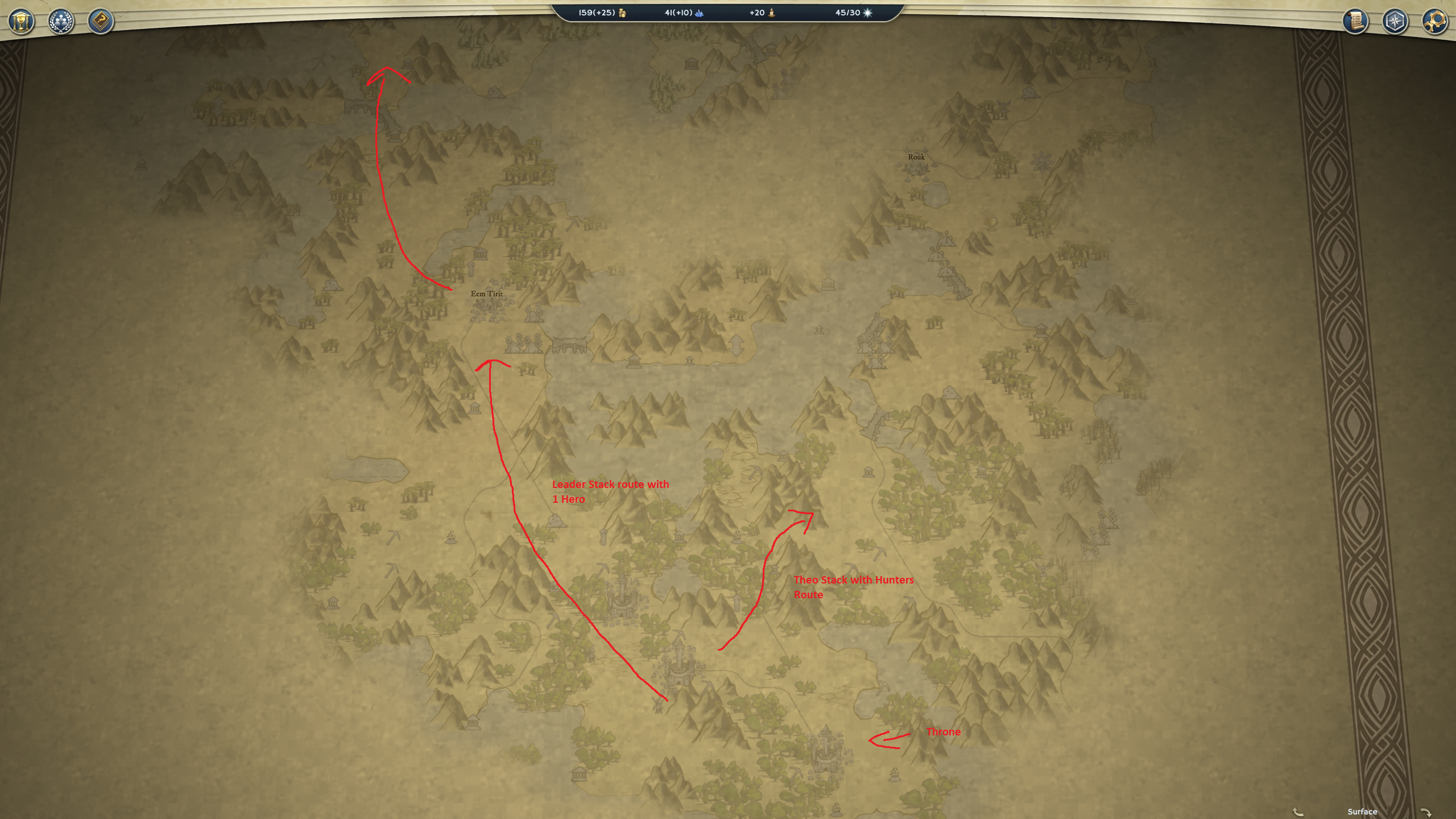 Like Skuns mentioned, he started to take some of my fortress and secondary cities, but when he reached my throne he retreated as it was well defended… When he retreated I couldn’t get all my units to attack him, I didn’t have enough MP, so I only attacked with half of my troops, (Lucky Skuns!)… I couldn’t take his leader, just his hero and some units, but he took my theo hero, which was a shame. I should’ve probably just defended my throne and let him raze my cities. 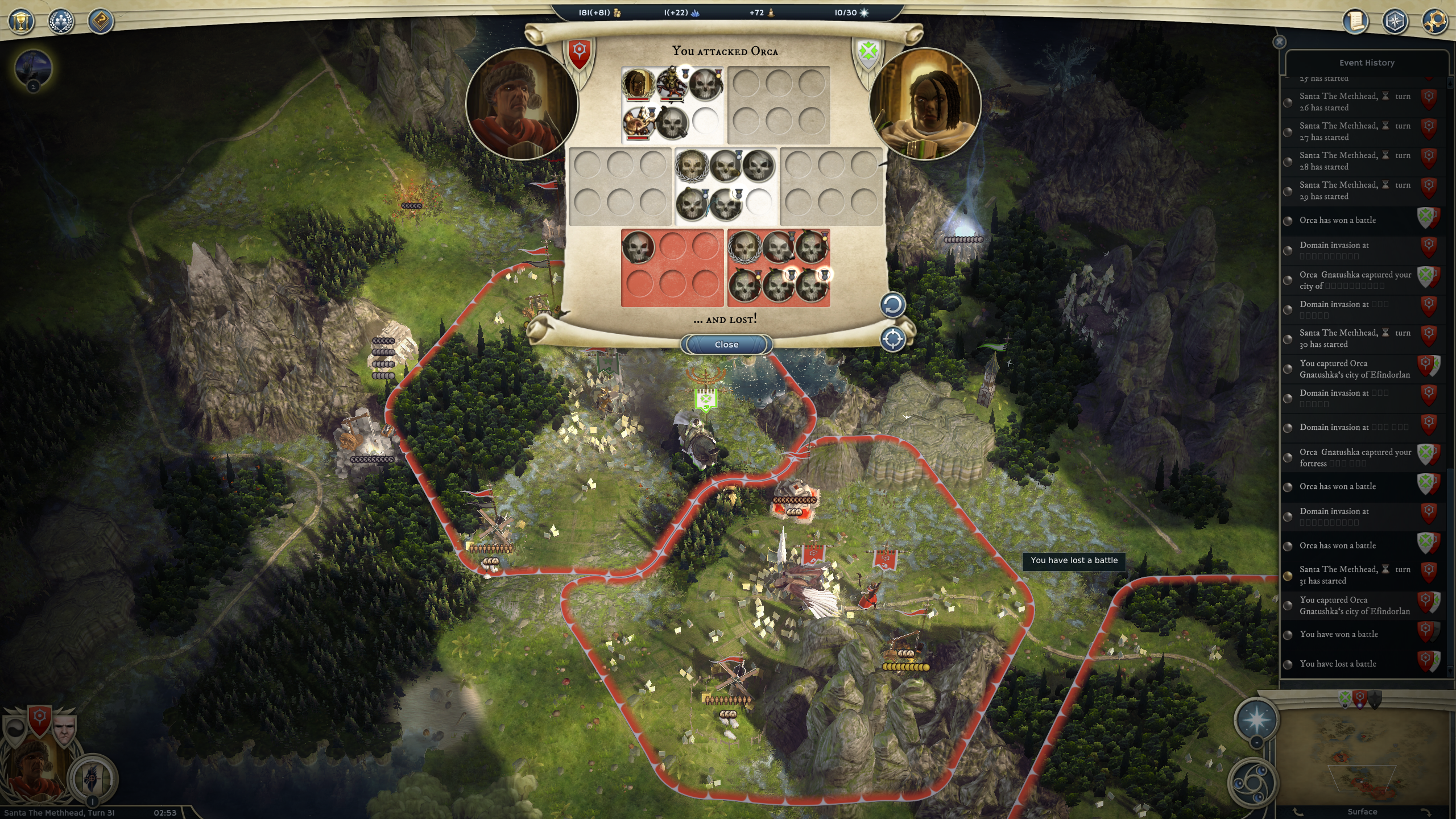 In the meantime, my main stack was underground, confused because I had no idea where Skuns was, so I had to make a choice, between going east and west… I chose east… This is basically the second decision that made me lose the game. If I had chosen west, I would’ve probably taken Skuns by surprise there. Again, poor scouting… 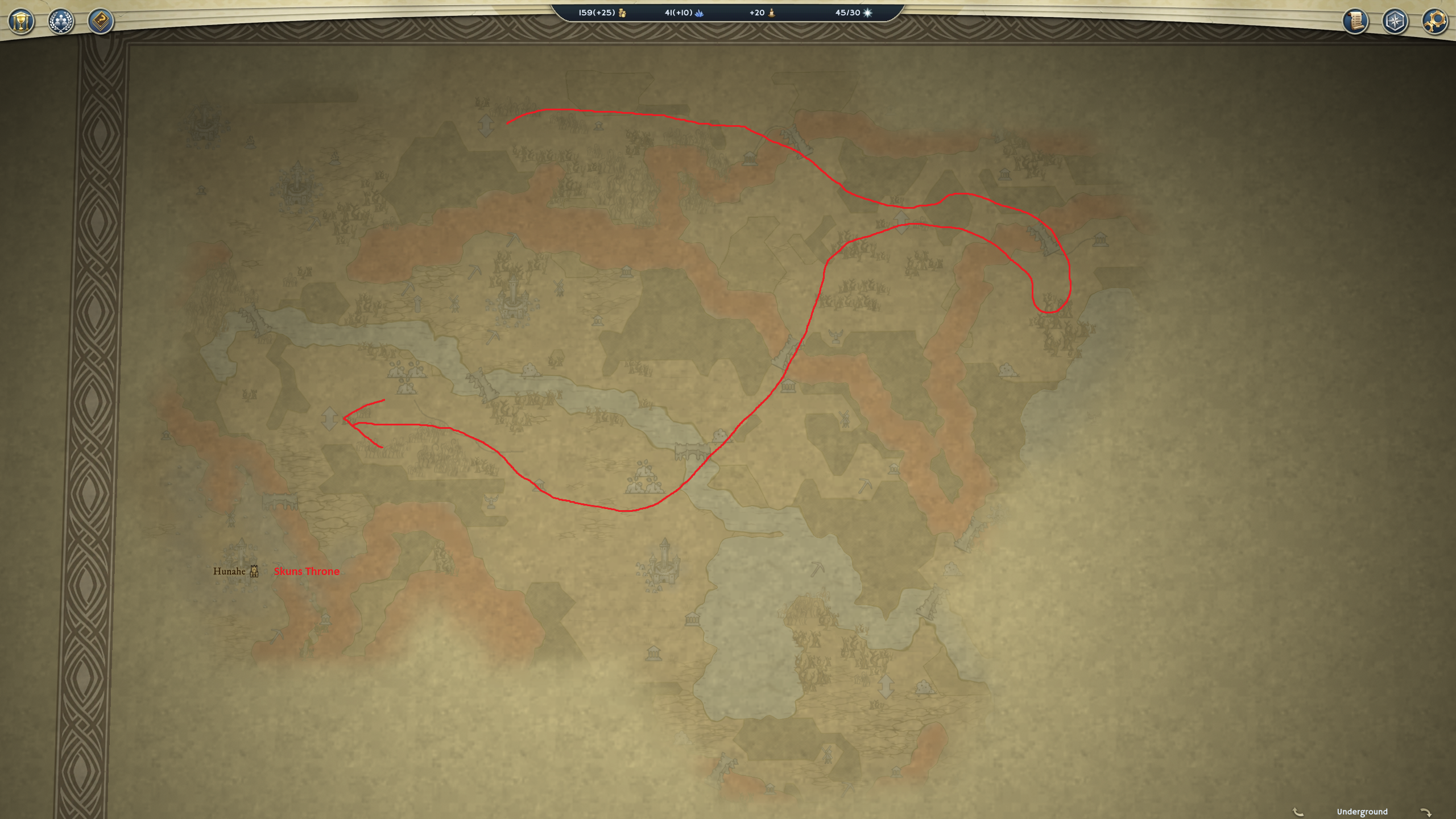 In my cities, I thought I could beat him with the remaining of my troops, Or at least kill 90% of his troops, making him retreat, but to my surprise, he won without major loses and I even evolved his spider =/…

After that, he just razed everything…

In the meantime, after my main party figured that he wasn’t east, I just went back west, where I eventually found his throne and a big city, I took the city and absorbed it… I moved to his throne, but he had a tower and saw me coming, also by this time he already knew I was around so he was preparing his defense, I didn’t have enough MP to attack him when he was mildly defended… Next turn, he summoned a bear or something and I decided it was too risky and I retreated, since I already had his other city.

The other thing that happened, Skuns razed everything, I guess to get Pure evil real quick, this was a problem, because I had a builder and I wanted to get forts around there to get more income, my mana was out and I couldn’t summon anything, at this point I decided that the only way I could win, was to rebuild, but I needed army, so I started to get risks at attacking dungeons and that damn Ziggurat that killed my theo. When I attacked the Ziggurat I was desperate… I should’ve thought that through, there were a bunch of flyers and 2 damn phoenixes.

It was just matter of time before Skuns rejoined his troops from my territory with his defenders and he just reclaimed his city, to RAZE IT!? Seriously? The other thing, is he razed it when I was 1 turn from finishing my builder, my plan B was just to take it and run south and rebuild my throne lol.

After that, it was just 2 wasted turns where I moved my leader to get killed.

GG ! I hope we can rematch soon! 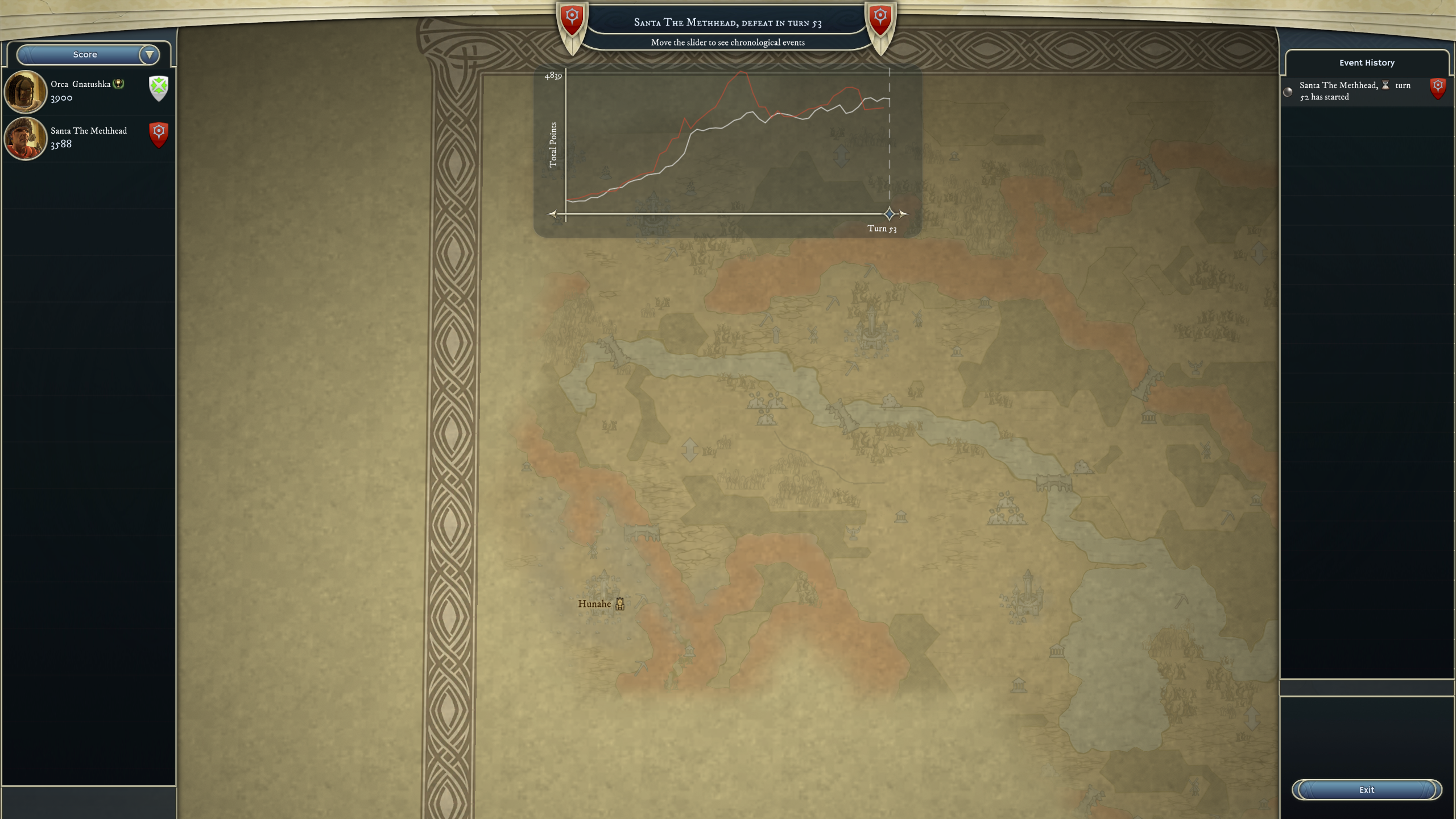 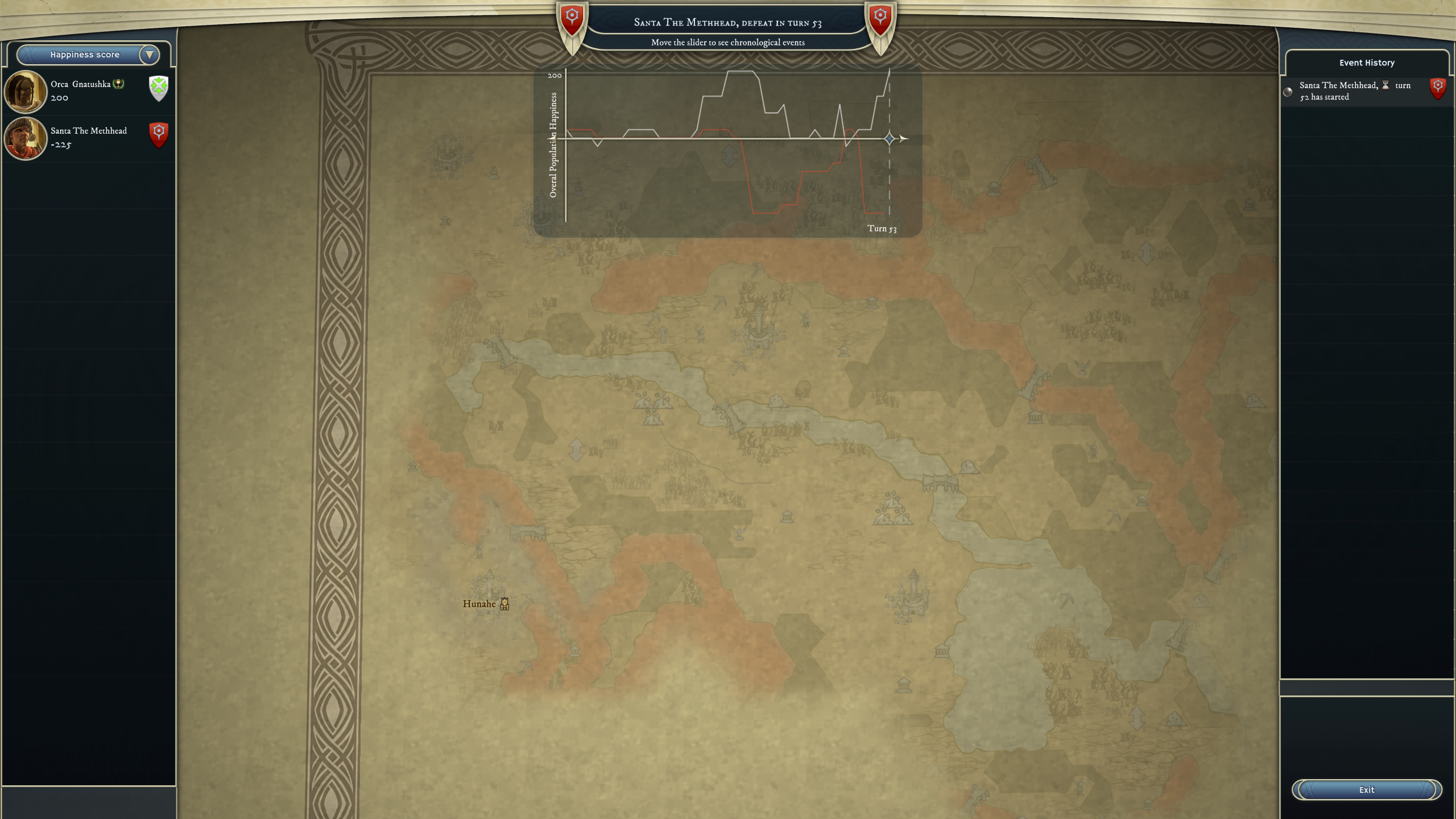 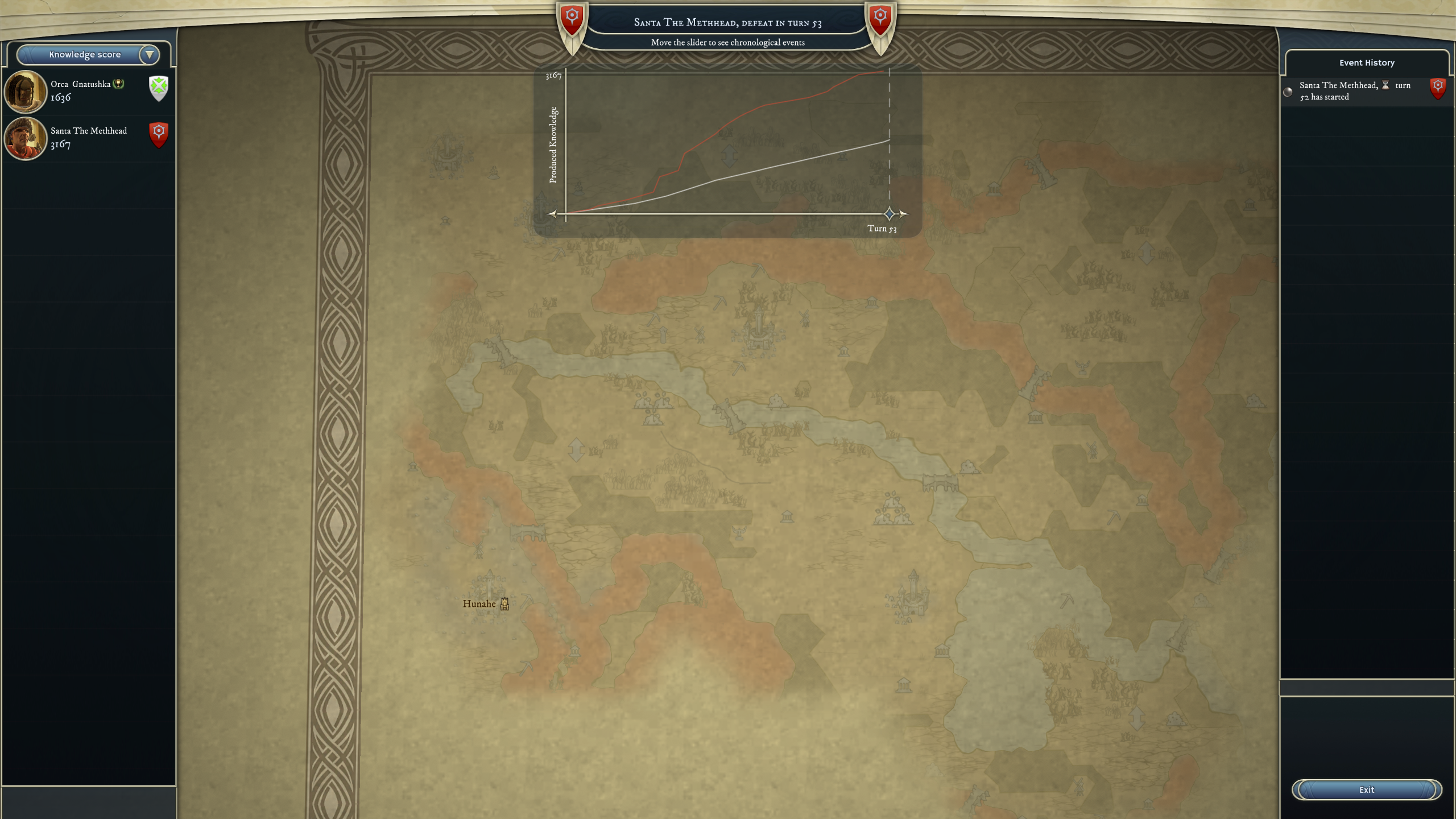 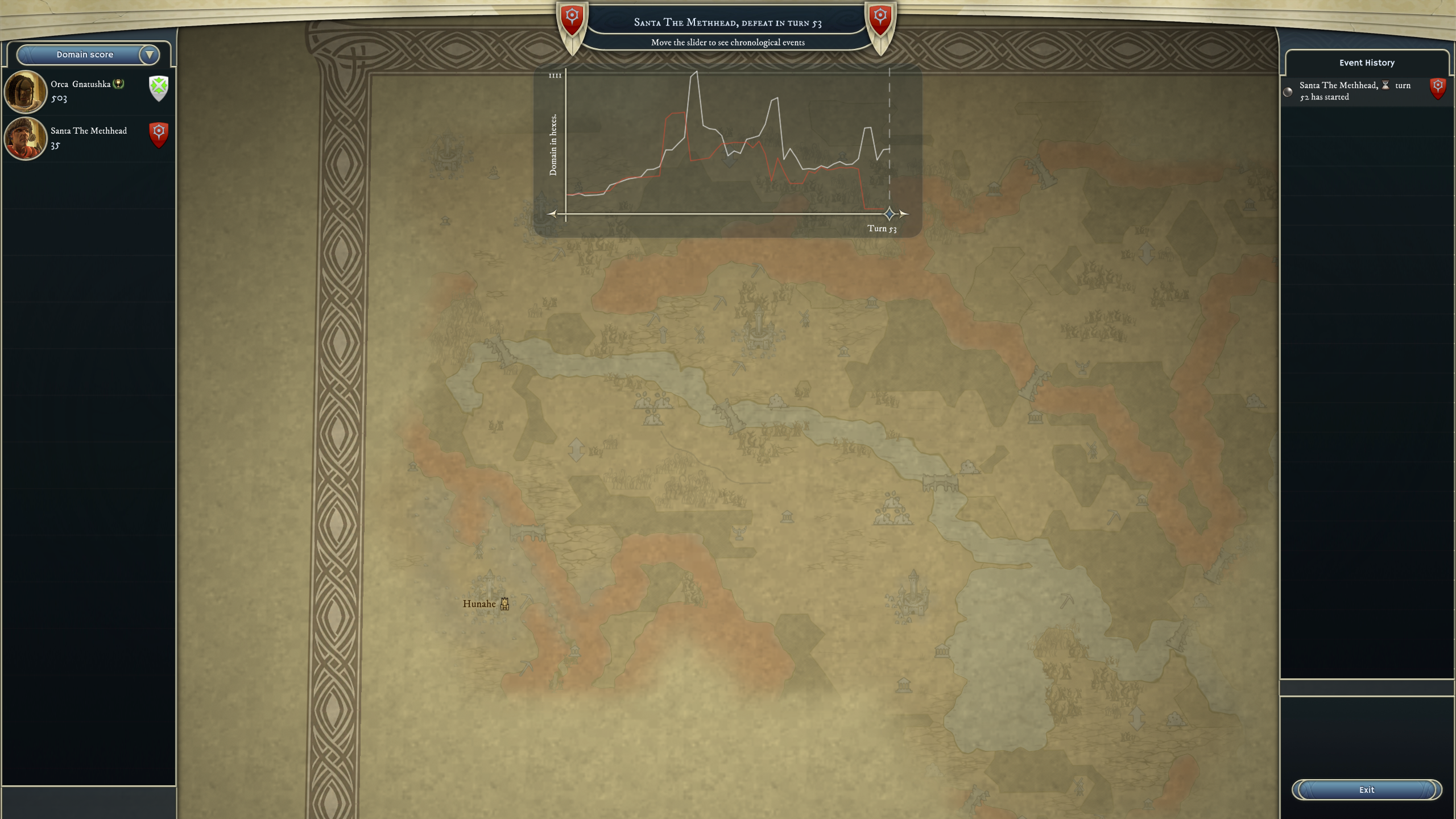 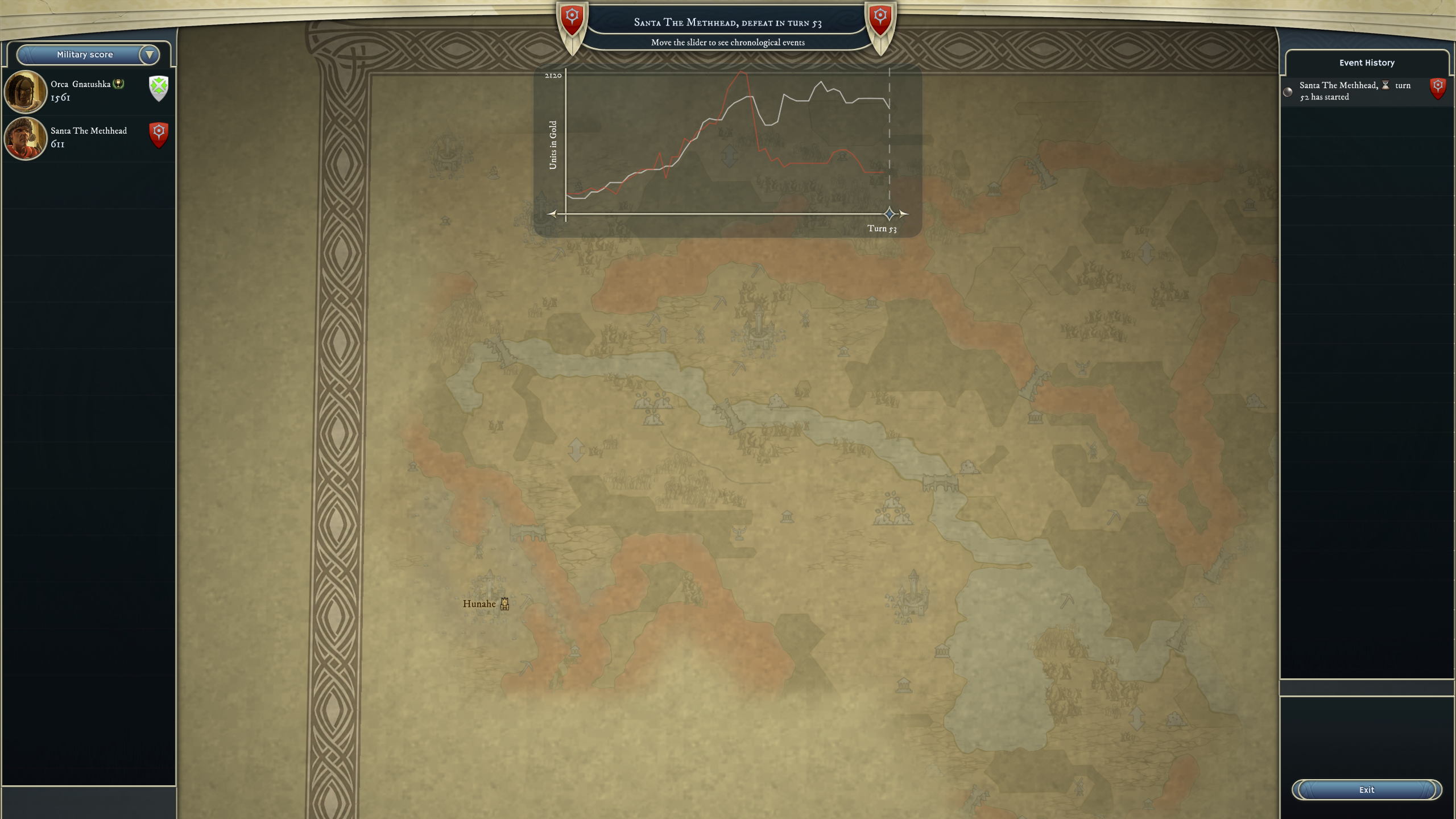 And, of course, it was a smart move to raise a forest on my way when I'd appeared in your domain. I had a chance to cancel it with my warg, but I'd realized that too late - I had no movement points for that anymore

So you had a time to unite all your forces ro protect your throne. And I couldn't attack you, so I retreated. But you tried to catch and kill me (I had no throne on that moment) - and lost all your units. Though it was a small chance for full success without involving all your units there for one fight

At least, I just didn't die in your domain on turn 30

I will try to write my report tonight. You did what I should've done, defend the throne... At least I didn't die at turn 7

You should know that I'm waiting for you

I think another reason why I'm going to lose is because so far in the game, and I haven't found you... somehow you are not in the position I thought you would be, so my main stack is pretty much useless at this point.

And yes, you had a good defense position and should try to attack - to lose few cities is not so bad with your economy. But losing throne is a big fail in such position.

Actually, I was glad to see how you grown up with your playing skills.

Game is not over yet, so you have a time to get off your knees

It was interesting move, DrLight.

But too self-confident. It might work against T1\T2, but it's not so good working for T3 units. In first fight you lost many significant units. So you shouldn't attack again and protect your throne instead.

I agree your shooters could bring me more damage if they would attack spiders instead T3 goblin. But autocombat is not so predictable,. And my baby spider became T3. Thanks to you for it

P.S. You will be glad to know that I lost 1 T3 flying unit during last turn because of lost souls

In any way, when you're the host you should turn off the timer before the match start. And then turn on it on second turn if I'm not mistaken.

If you'll decide to rehost the match by yourself, please set 2-days turn timer since 1-day timer is too harsh for me.

I checked your settings. All is good, excluding 2 things:

2) The host should start on position Team № 2

So, if you still want to be the host, you need to change the map size. Or we can follow by the rules and I can host it

Hi, DrLight. Sorry for the delay. I was much busy on work this week.

According who is the host - I thought it's me

Though I'm fine that you can host this game. I'll join it as soon as I can - through 43 seconds 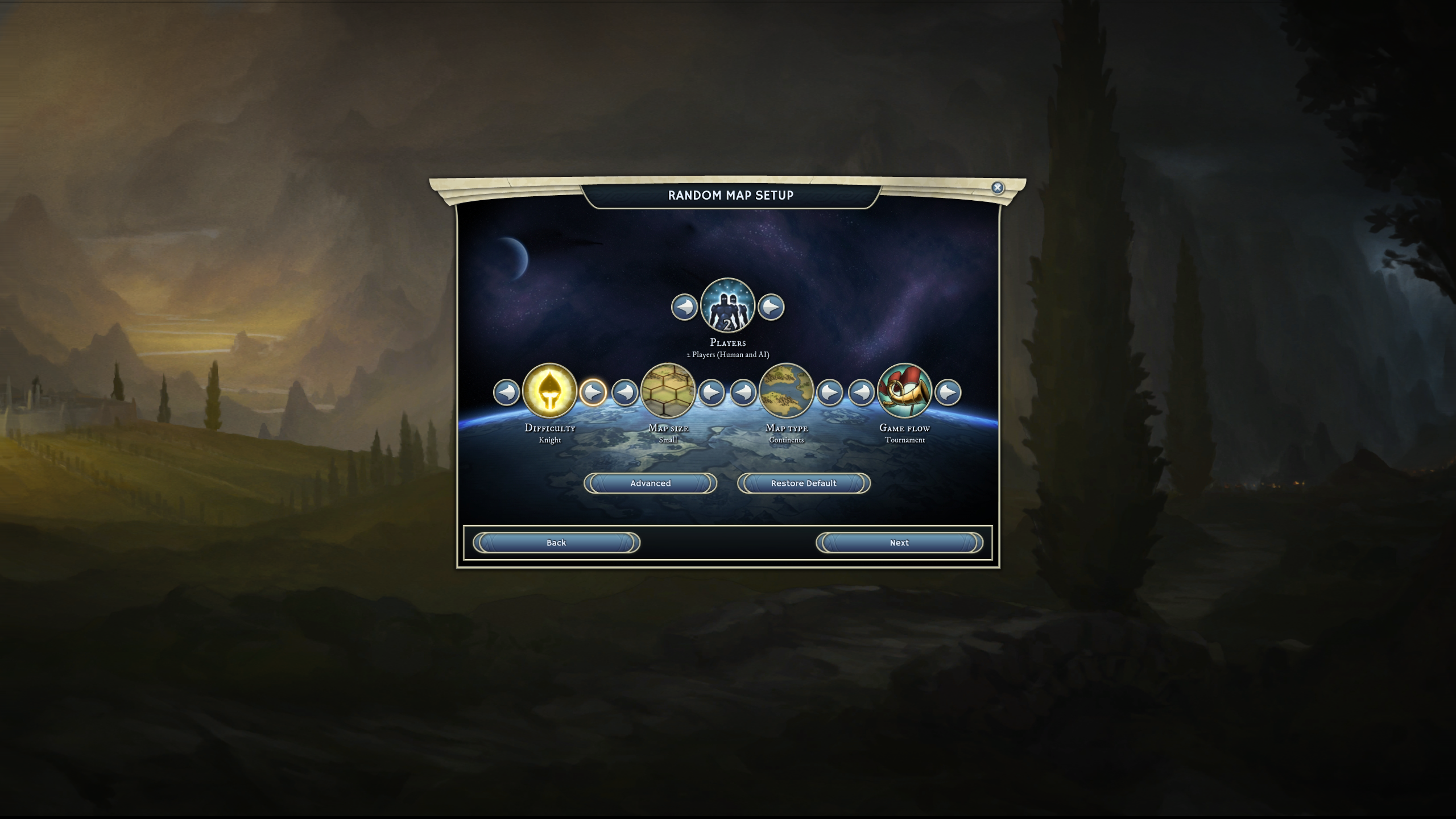 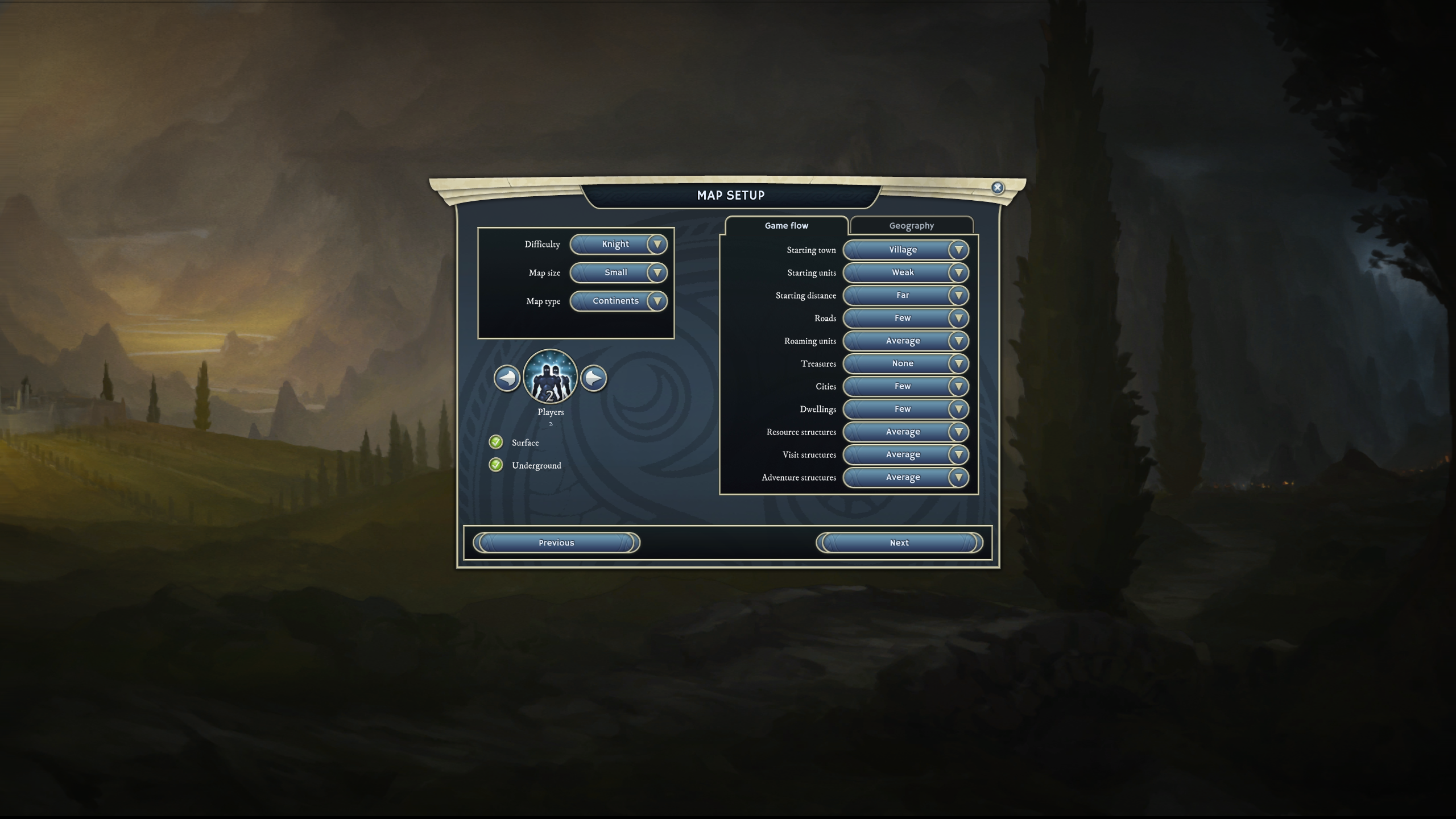 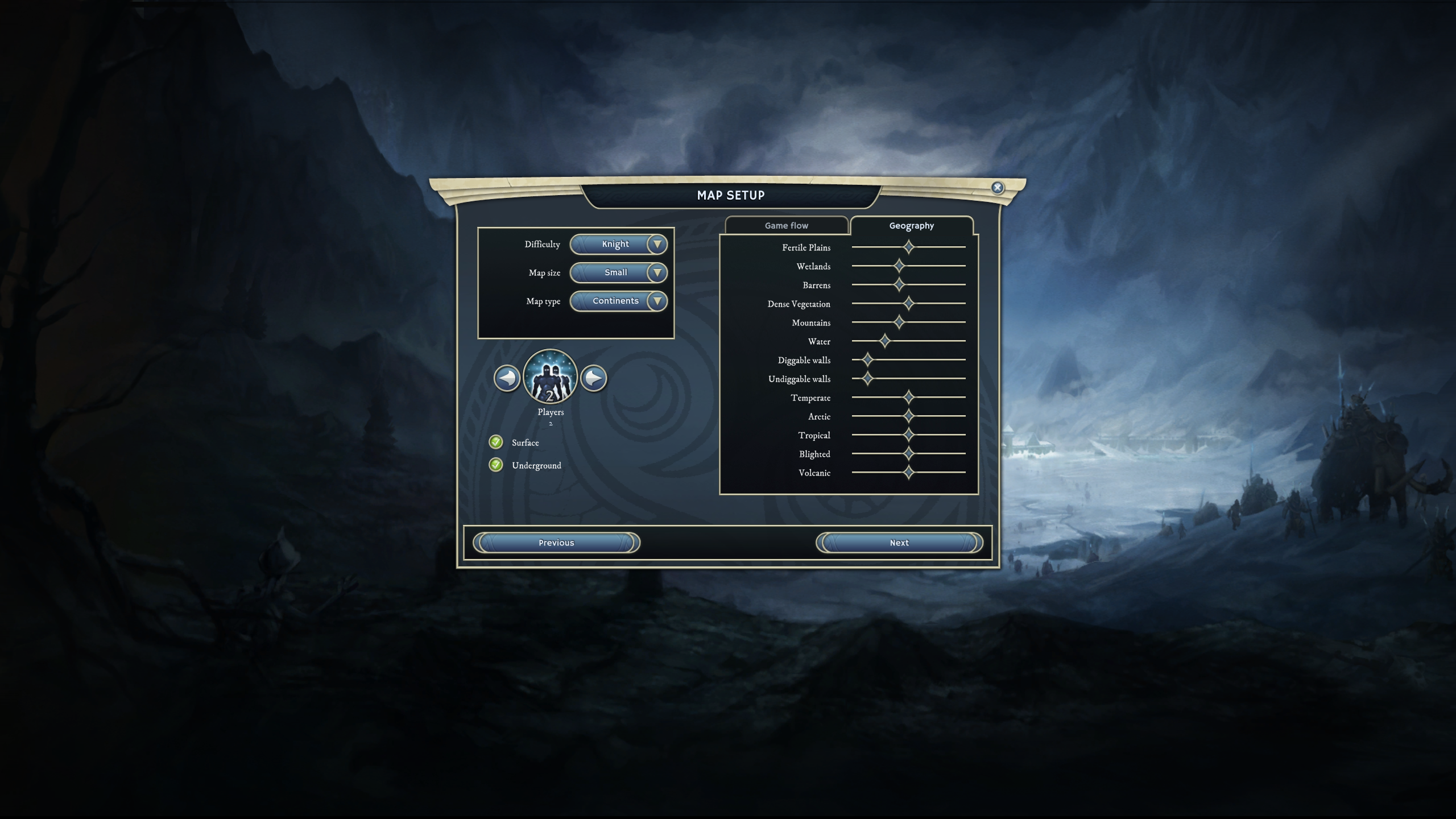 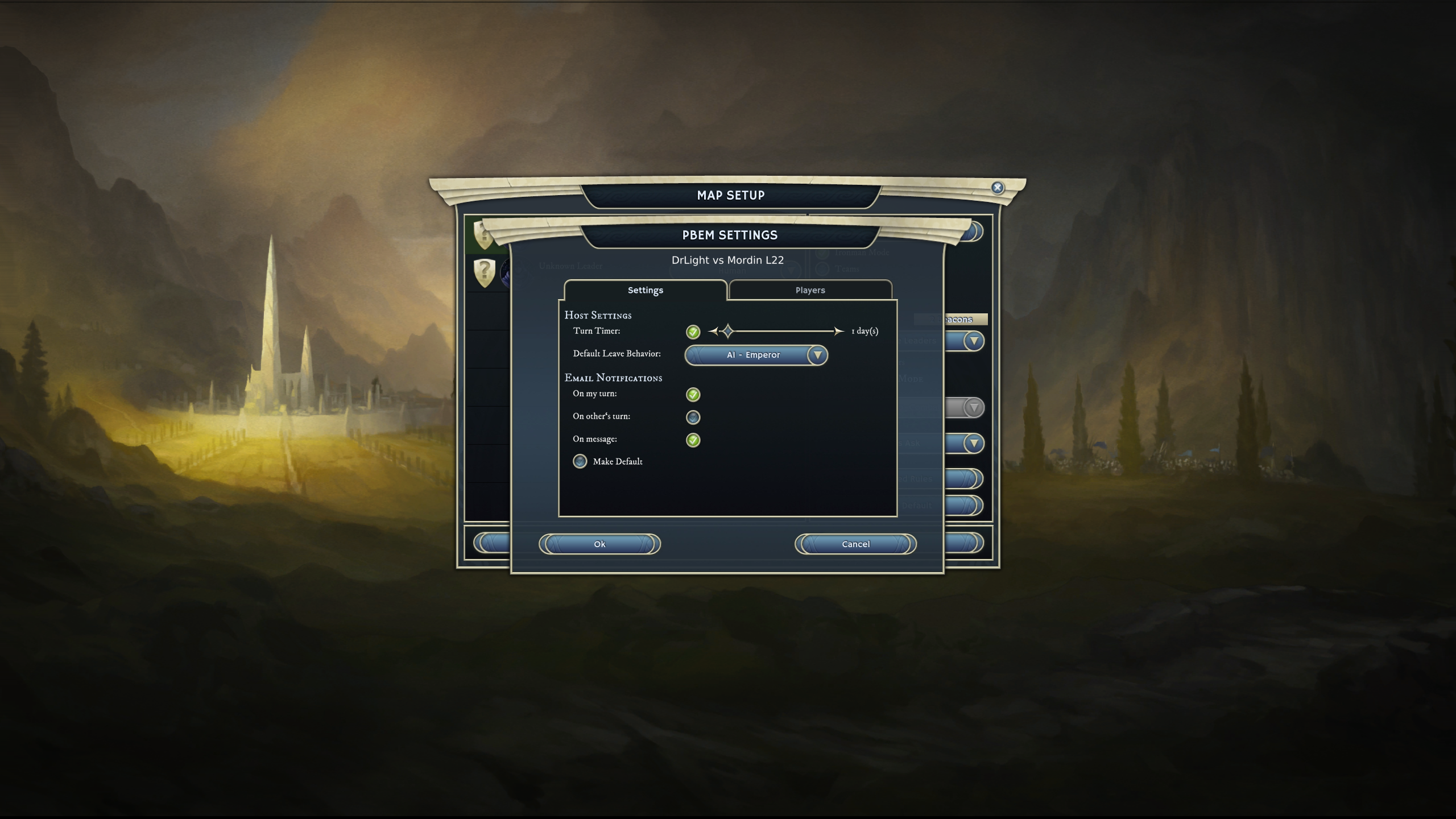 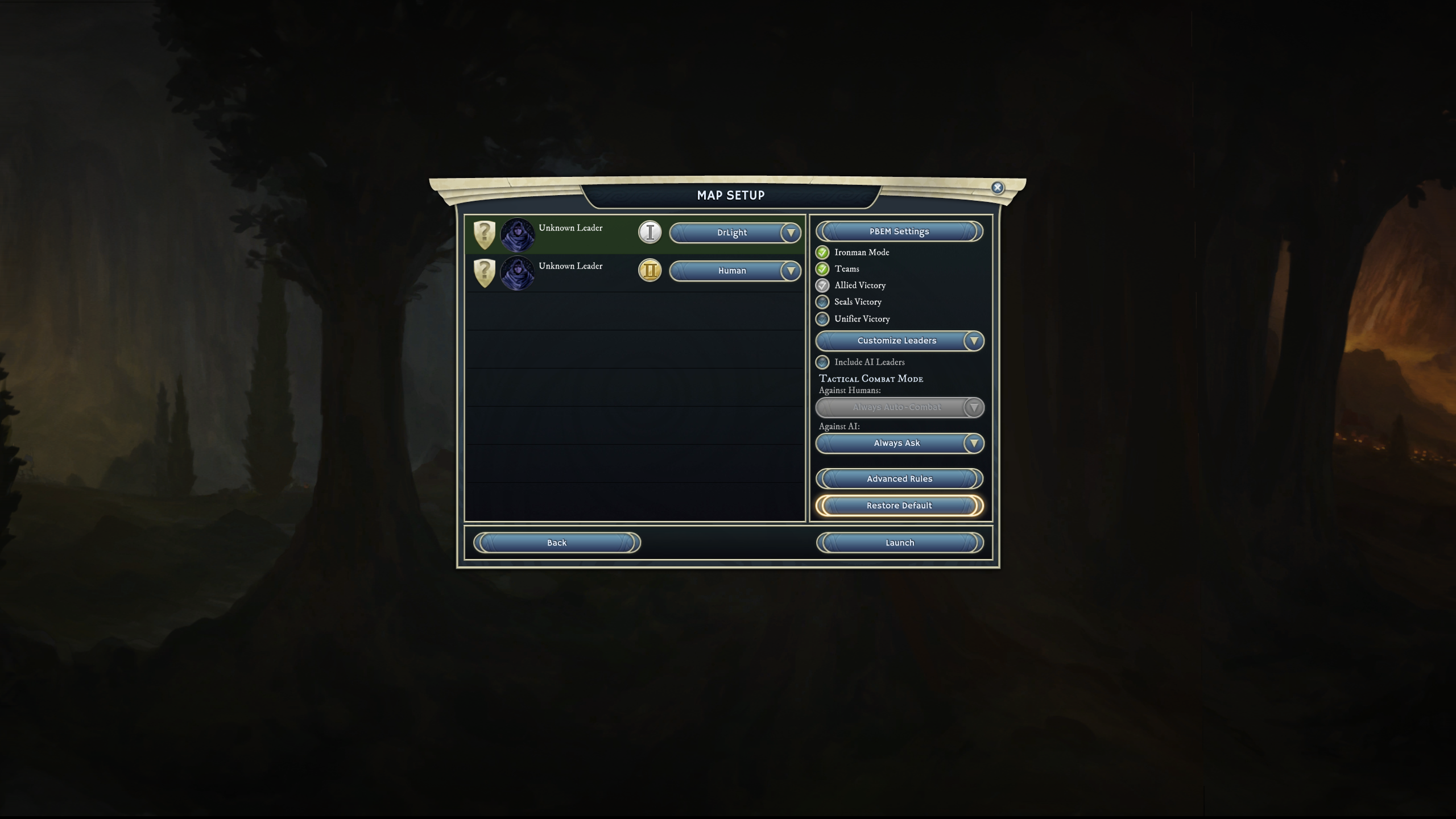 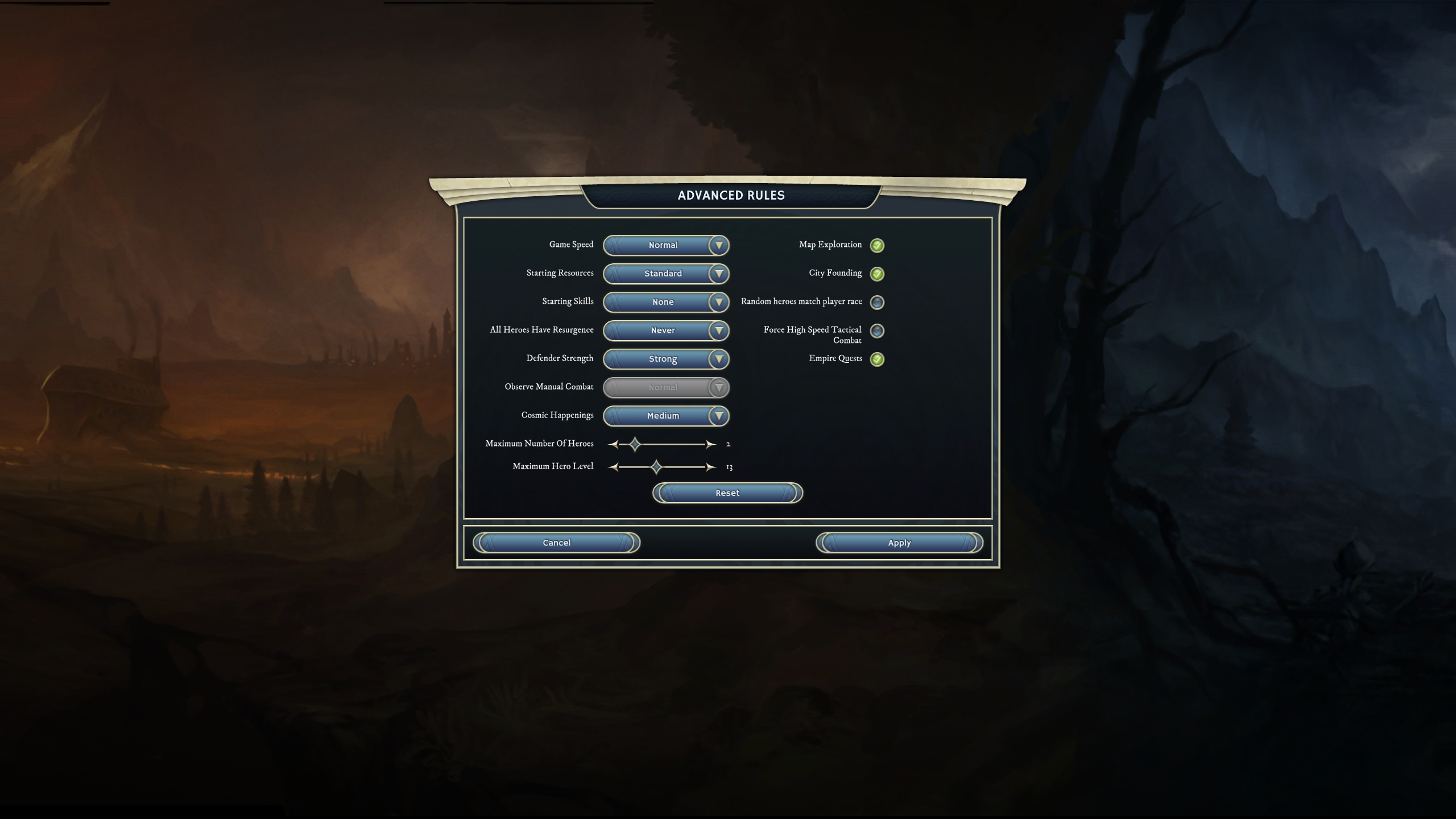 Do you want to host this?