Seems like it was nearly even until turn 12/14. At the beginning it's really important to learn how to clear site without losing units and of course too much HP. Maybe an academy game is helpful for Th30n...

Losing heroes usually is not a good thing. Losing one is terrible and can be very difficult to recover.

Happened to me a lot in the beginning. Losing a leader is probably better than losing a hero in the beginning, but sets you behind considerably in research early and can reject good tech early.

Unfortunately, my main leader was quite far, and as soon as I saw you at the other cave entrance I started heading back, but it was too late.


I think clearing sites has been difficult for you since there were some uncleared sites around your main area. Particular a Mana node with three wisps that surprised me nearby.

Yes, I lost almost every secondary hero I had when clearing the sites. And that Mana node was in a vassal city that recently offered to join me, while my main force was on the other end of the map as I noted above. Never got the time to turn back and clear that site. 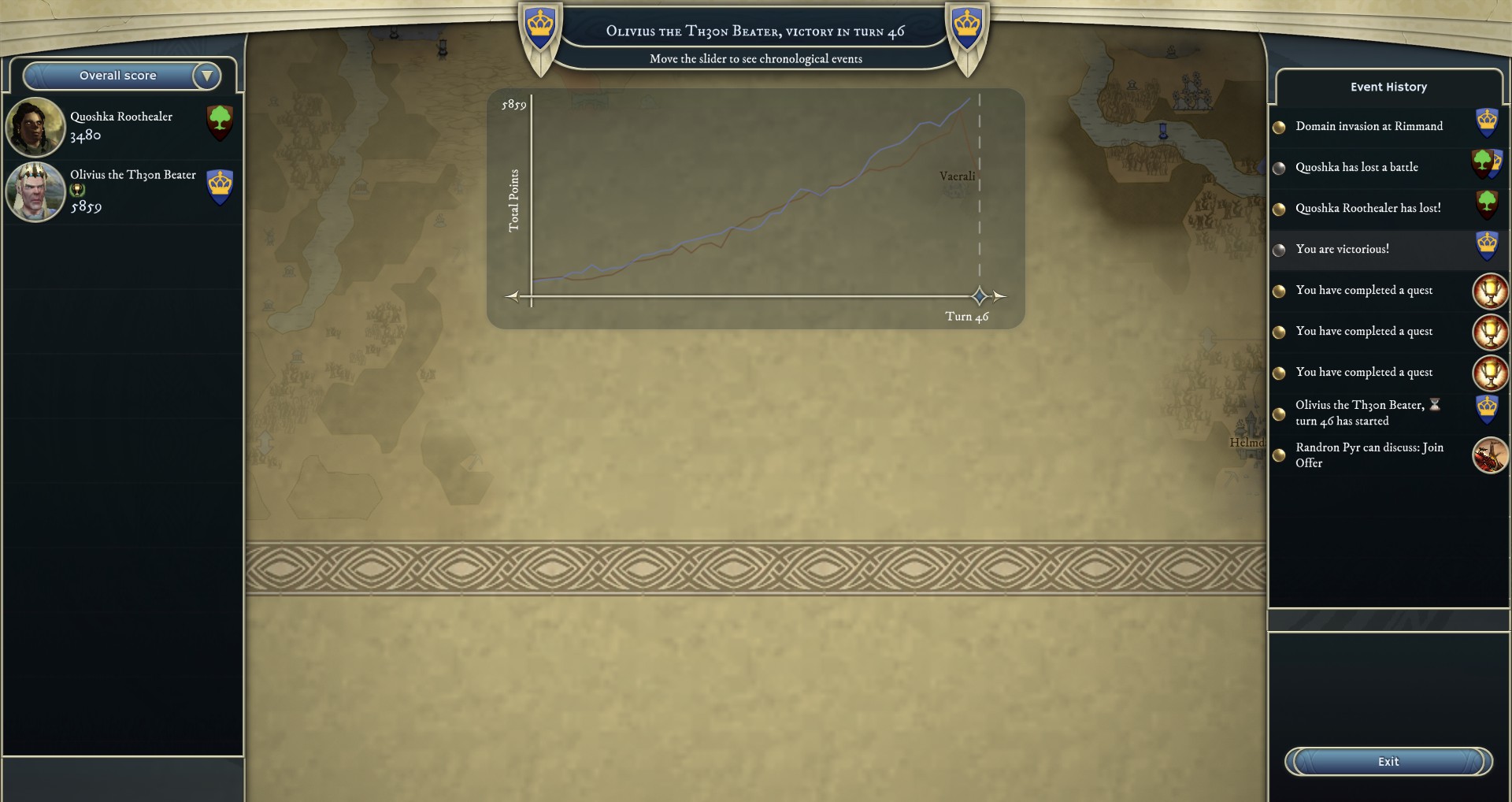 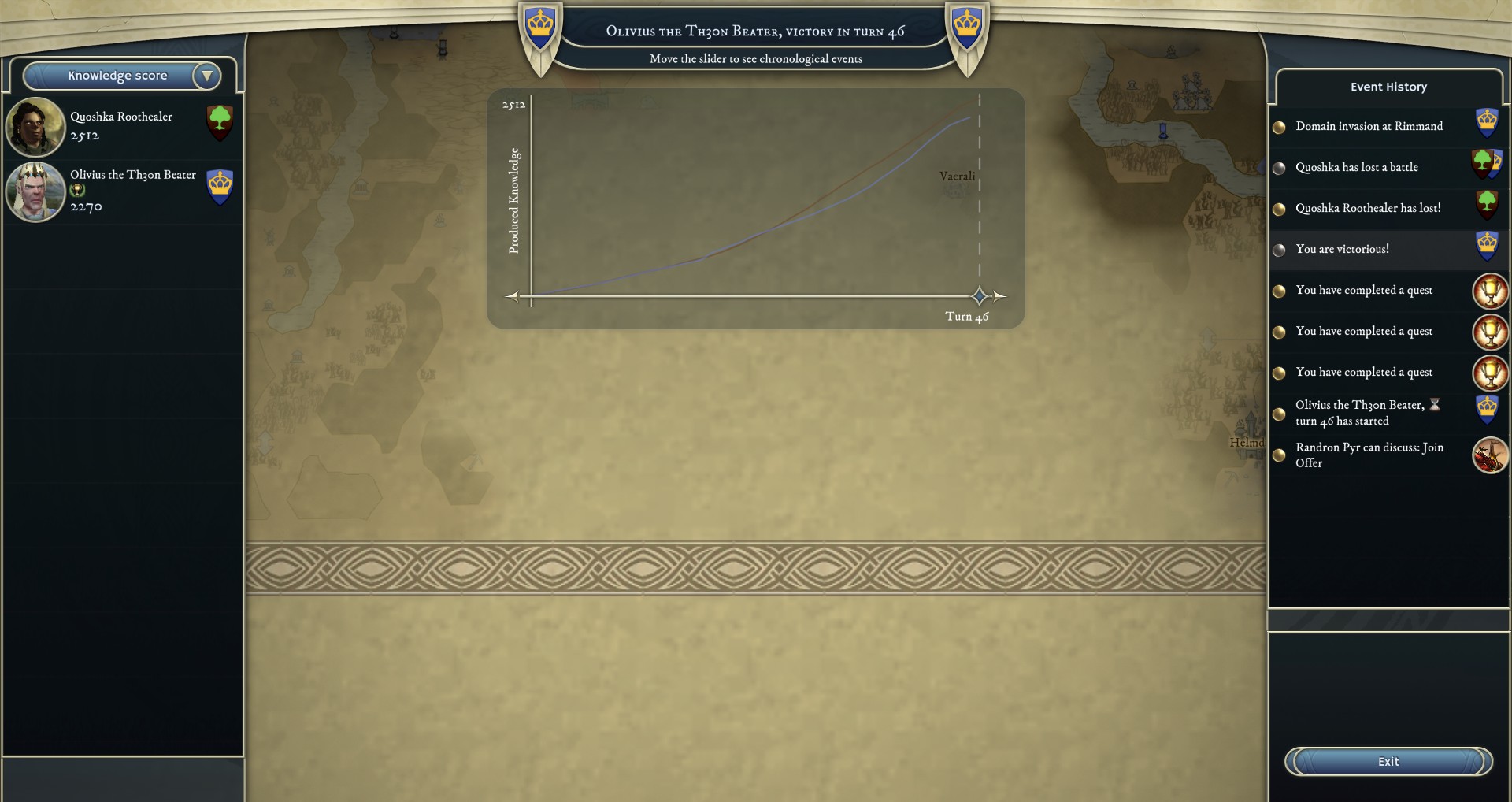 In general, I had a very good game. As an Elf Sorcerer, I had an extremely good situated city location with a lot of good expansions. After I cleared my starting location around turn 14, began heading east. With my starting force, some evolved Initiates and some tributes from vessel city I started to walk and cleared a lot of sites on the road to TH3on. I knew he would be situated underground as some of his scouts were coming from a nearby cave, so I left one hero at home to defend and just summon unit on the way to increase my force. I vessel a Dragon Dwelling, a Fairy, a Frostling City and a Tigran city so my economics was solid.

I had some animal problems in my main when Th3on was harassing my cities and forts. But I was not that worried as I would eventually deal with it sooner or later.

So I cleared most things and found a convenient cave on the edge of the map. I sent down a wisp to check and it got taken out by his hero.

Here come the little feedback, despite your level and such. You had some time to prepare for my arrival as your bird scout was hanging around that particular cave. If you would bring your forces quickly to rally at your throne it would be easier to defend against my forces. Despite that my forces were probably stronger and better level. Leaving the throne open, standing by a chokepoint with just one hero stack against a floating army is not ideally the best decision as I can take a water hex to my advantage. 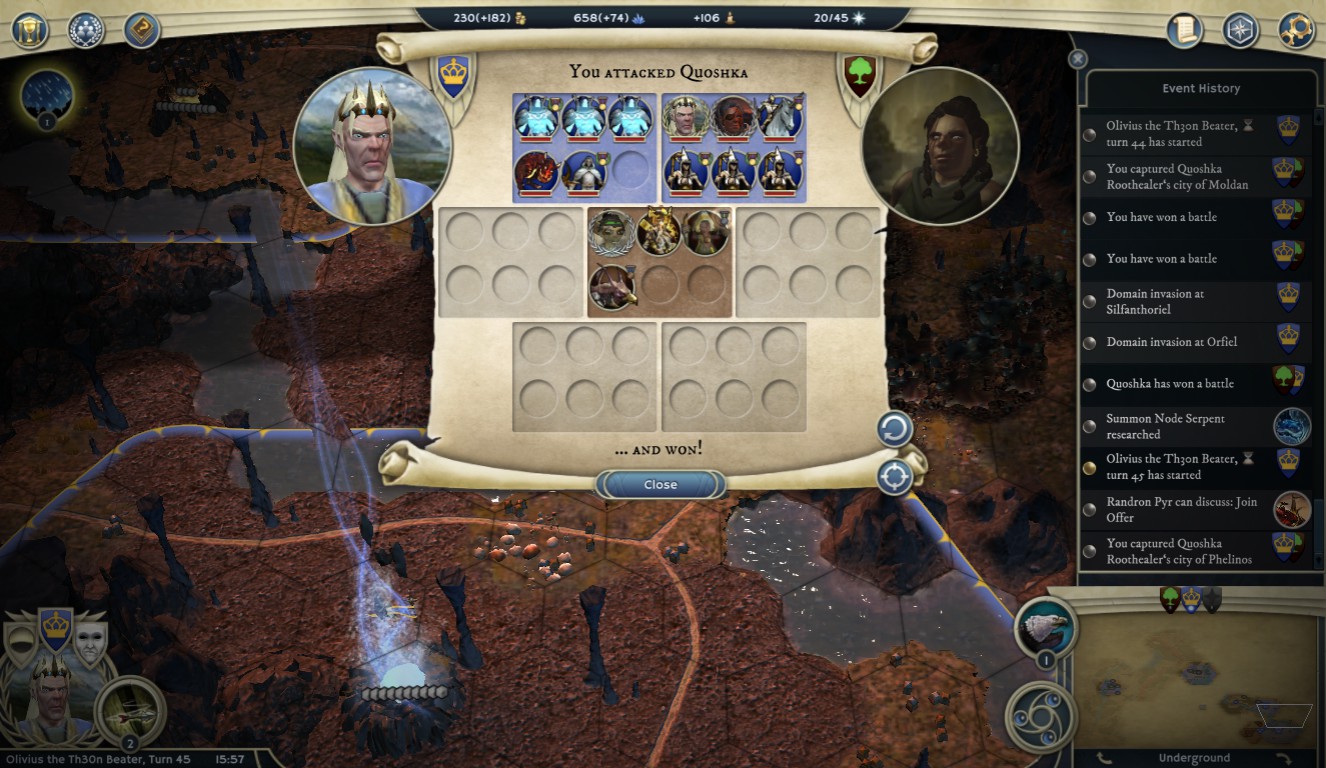 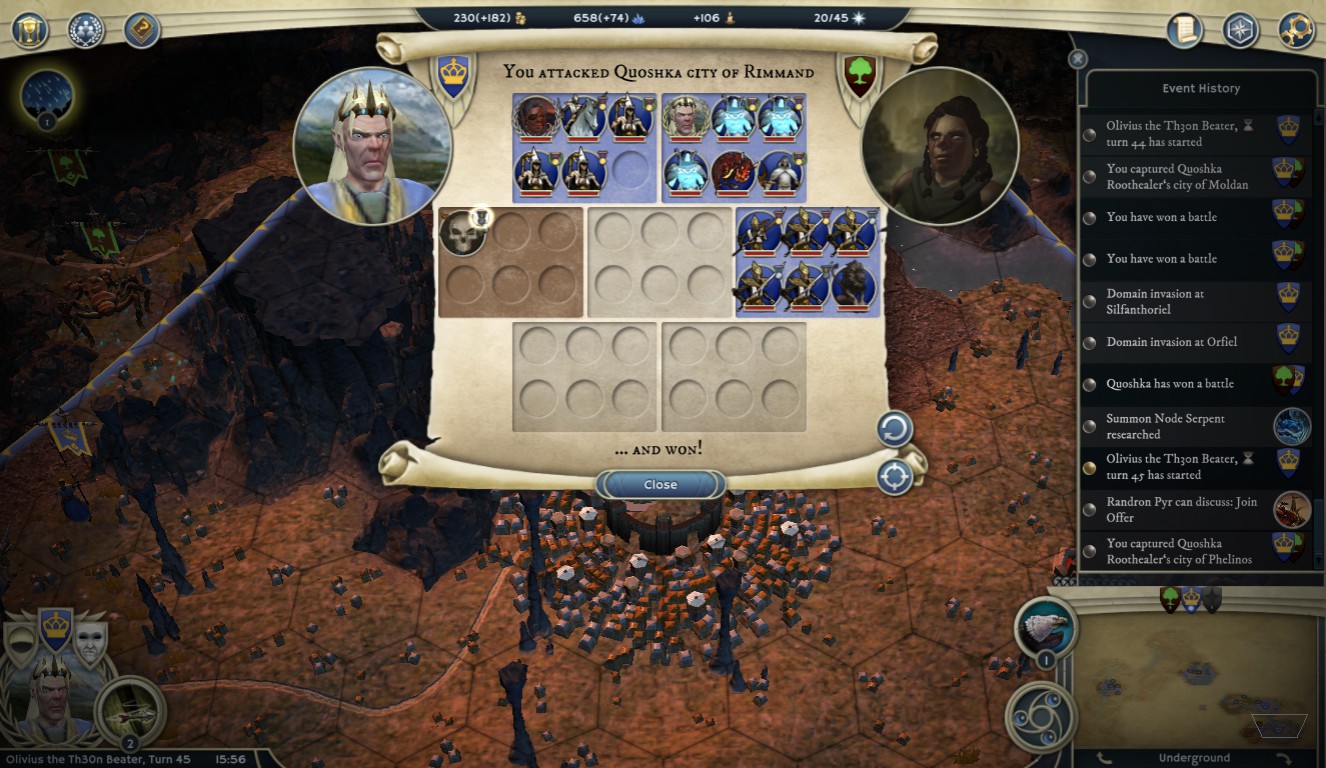 Then the final battle: 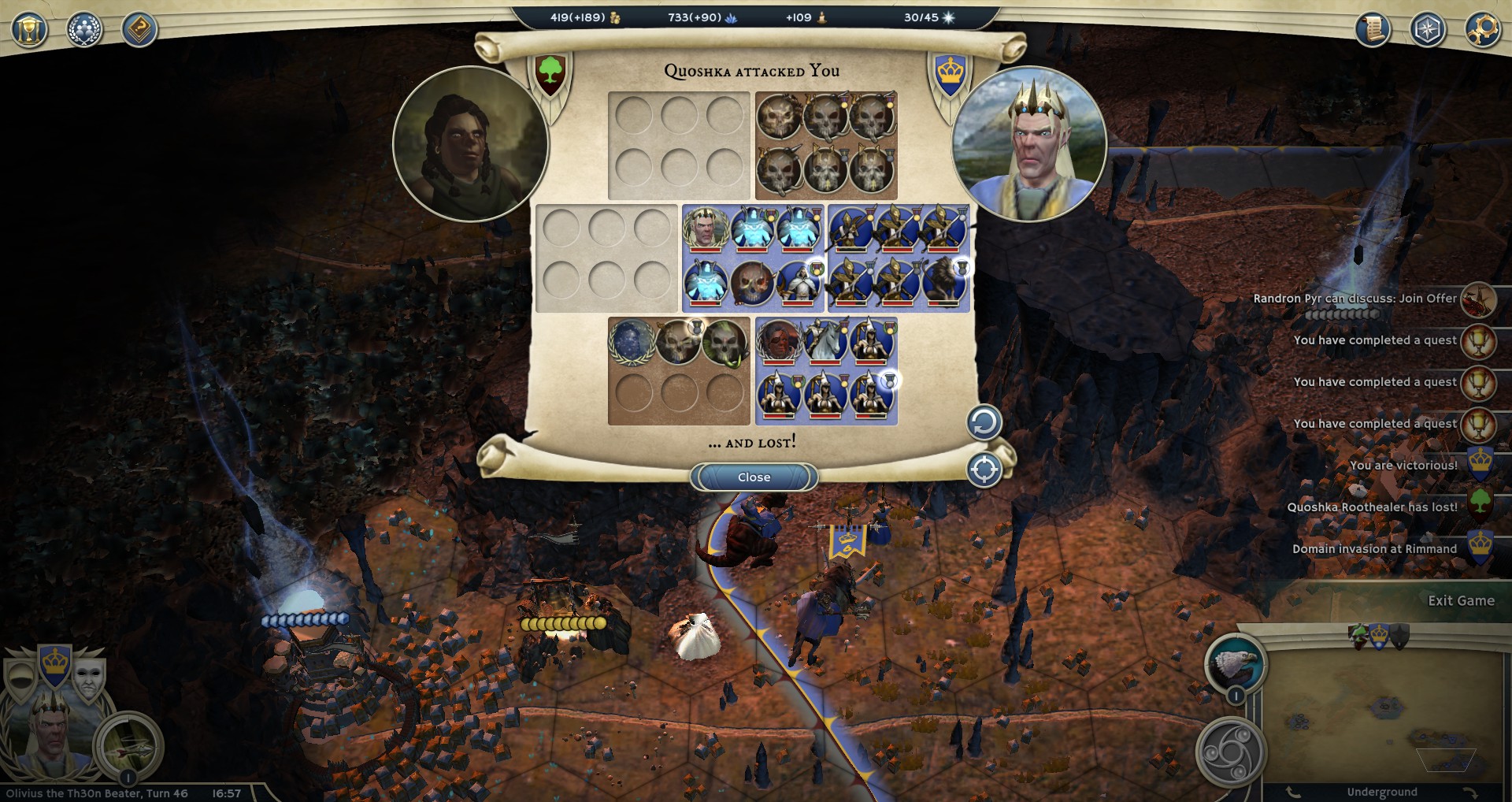 It was not a strong leader duel against the Quoshka Roothealer. I think clearing sites has been difficult for you since there were some uncleared sites around your main area. Particular a Mana node with three wisps that surprised me nearby.

However, if you are up for some games with duels some times we can play some times casually

Hosting the match as I was first.


Print screen captures both screens and I edited 2nd screen out but f12 would be so much more convenient.
Here are some screenshots: