i had no idea what i should do vs a necro with a poison/physical dmg. but i managed to get a Theo for a hero at one point. I made a lot of mistakes in ignoring the economic aspects of the game and i tried to relay on just crossing the map - like tha vanilla version of the game plays (: so i'm glad to say the game is now very different.

so a big mistake was that i left my 'natural' 2nd town as a vassal - it was a big one and i didn't find the time to kill the knights defending it... so at the last turns i had only 1 town making priests (i was also 10 turns away from shadow demons - not needed at all in this match-up..)

when i saw Marcus's forces becoming + 2 knights over a turn i decided to give him a fair fight and not to go stay behind the walls of my capitol making a priest each turn - this would have been just a delay of the inevitable anyway.

Yeah, I don't know why, but when I look at the report, I see an embedded image series. But I removed it now, and then I tried to add the images via "insert image - choose URL, height, width" but then the images are not visible at all, just a broken image.

Anyway, I uploaded the images and added to text now. Silly website functions

I don't see any picture displayed (0 out of the 3 mentioned)? I checked the code of your report and it looks like it's in imgur but when I tried the link it led to nowhere?

Yes, Karissa's Perfume, it's the third photo, ability clearly stated as "Cause Fear".

Thanks for the report marcus!
You're talking about Karissaâ€™s Perfume, right? It's supposed to be: (Legendary) has Cause Berserk (Medium Range, cast Berserk on target enemy unit) (was Seduce). But I also saw an issue with it in one game but didn't pay enough attention to it. I reported it to Zaskow, we'll check what's wrong.

I also reported the issue with LRU and GRU on auto, we'll have a look at it.

I wonder if Lesser Mighty Meek is not too powerful now. What do you think? Halfling T1 are very good hero/leader killer now in any case, especially if they have multiple channels.

I wanted to try Necromancer with the tournament settings to train for future tournament matches, I made many mistakes which is good for a learning what to do different! In turn 10 I lost my leader (the first time) trying to beat an unholy sanctum, there was a Undead Dread Reaper, a few other t3 and a lost soul, which is not the easiest setup for a Necromancer, as the Reaper will focus on killing my leader/hero. He succeeded and even though i tried drain his movement points with my t2 undying cavalry who also lost his "life". He was the only one who could inflict some kind of damage on the Reaper. To be honest it shouldnt be possible to do a Sanctum on turn 10, even if it cost me dearly, the reward made up for it (80cp, summon spirit elemental and aound 500 mana).

After losing my leader he went on an alternative route with my second hero, together with 5 other floating or flying units, to not lose momentum. The plan was to clear as many sites as possible in the 3-5 turns until my leader returned and was able to rejoin and go on the intended route together.

That plan was quickly turned into dust as I met Xlnts main force, and similar to me he had visited a Frozen Shrine, so both of us had the buffs. He had the higher numbers and benefit of choosing the attacking angle, so he won, but his leader died in the battle so his throne was vulnerable, so I sent all my forces on the main route to his throne, and I had a quest for a Knight on the way, and after quest was finished i attacked the humans and managed to ghoul another one.

I didnt manage to research "Whispers of the fallen" until turn 25, despite clearing 2 sphinx temple and researching all the t1 spells available.

Another "funny" fact is that a Hafling Archer with lesser mighty meek hit my leader for 28+28 damage on a forge, resulting in his death, I will think twice before attacking a forge without a lot of spell points on leader/heroes to kill them before they are within reach!

The first image shows my second attack on Xlnts forces, which proved to be the final battle, I placed my injured ghouls on one side and my main force on the other, hoping to split his forces and buy me some time to kill his Knights and other hard hitters.

Lesser and Greater animate dead is useless in auto combat, the AI dont prioritze to give undying before engaging. Sadly healers of the undead was alos not researches before that big battle, which was a big mistake from me, to not bring sufficient healers along the way.Â

I also noticed, once I captured his throne, that he had a legendary item which only have "Cause Fear" (was Seduce), that seems incorrect, that item either need a second skill added or lower the rarity.


Thanks for the game! 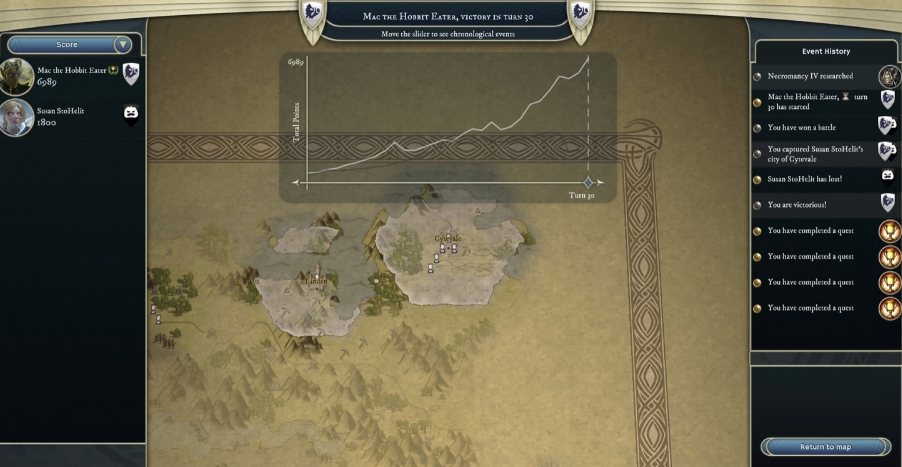