Screenshots will be uploaded here.

Yes, the Tomb in the vassal I couldn't clear in turn 6-7 when I was there, it was guarded by a T4 I think. All the SS is guarding my Throne, but you never moved there so you didn't see them, just the 2 in my main army.

With "Scouting" (10up) all units in my stack get +4mp, so all Assasin's and Shadowstalker in my leader army have 36mp, so they each move 12 steps in any terrain (except mountain) and the rest of the army was made of 36mp units with cave crawling, so basically they can all move the same distance. The Firstborn, Boar Rider, Shock Serpent, Pikeman was all a little behind when I moved, but I try give them the haste berries when a chance was there.

P.P.S. I understand that the map was few big and etc. But I found 1 or 2 free treasures on the border of your domain not so far from your vassals citiesÂ

Thanks for the game too. I hoped that my starting position was very-very good for defense, but I had no time to prepare needing number of units. Â

Â  And it's strange that you were soÂ careless with your leader at the north of my domain)) But I hadn't full scout information about your position there so I didn't want risk my main forces. And also I would need few turns to catch you there.
You had researched Shadow Stalkers so fastÂ

Â but later you mostly didn't use them.Â

Â  Also I was shocked how could you move your Walking units (almost 3 stacks at once) on such long distances for 1 turn without Death March for Rogue.Â

P.S. I thought you didn't want to report this game for a some perion during the tourney.Â

Thanks for a good game Skuns, I had my crows scouting and I think we meet around turn 18?
At that time I see a quite strong army, with a Theocrat hero with converting and already a few converted units, so I knew this will be a real tough match! 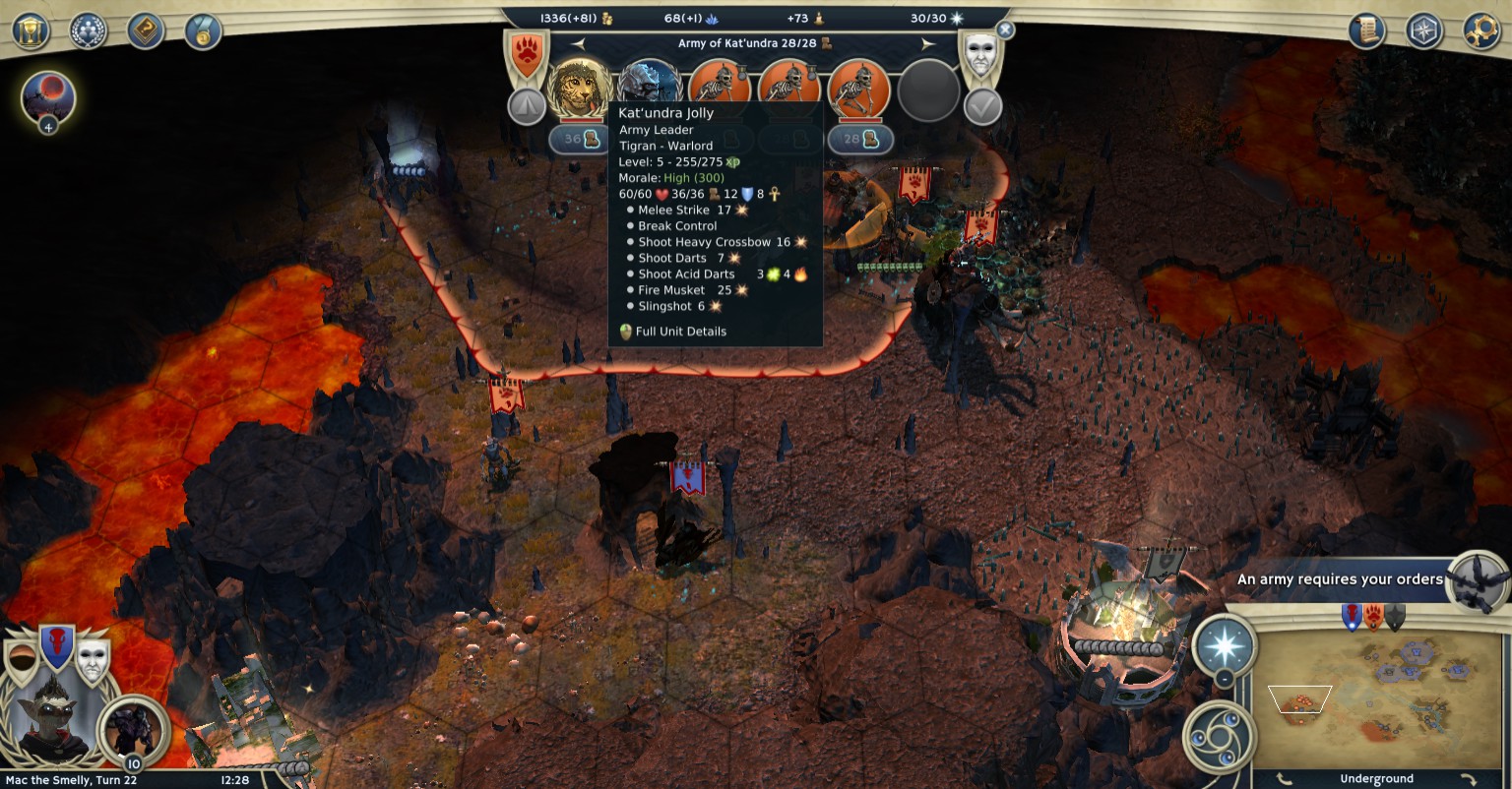 On Turn 22 I find your main army gathered, and I still have 10 turns (I cleared a Sphinx temple so it was actually quicker) until my Stalkers was researched.

And a few turns later, I see that you have split your forces and are quite close to my base, so here I was really cautious as my army was also split, and I could't beat your army without them being joint. 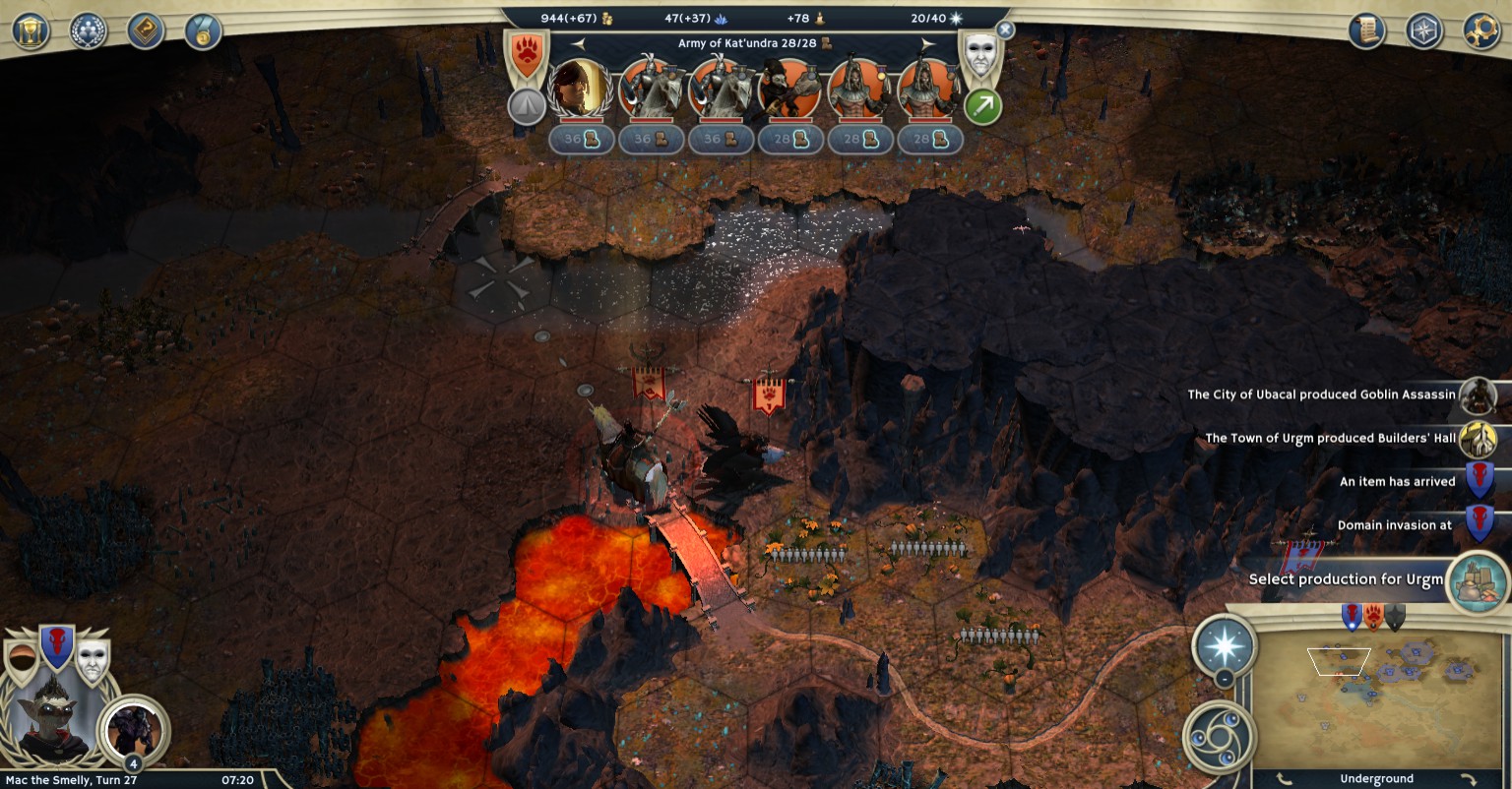 Where you went from here I don't know, but I was able to join my armies the turn after, and from there it was a straight path, with a surprisingly amount of uncleared (and good) sites! One which gave me Summon Shock Elemental, at the cost of a Inflict Death on my gold medal Stalker

I started to take the cities one by one, and rather than then Plunder them, I migrated them all to Goblins which made me Pure Evil, reached 7 cities of the same race and also 7 towns, so I got a triple reward within 2 turns.


Since my main army was very far away from my base, and Skuns coming closer with his army, I started to release my cities as vassals, and it gave my free defenders, as well as HUGE tributes. I took the gold in below case, but the army for 518 gold would surely have been considerable as well. 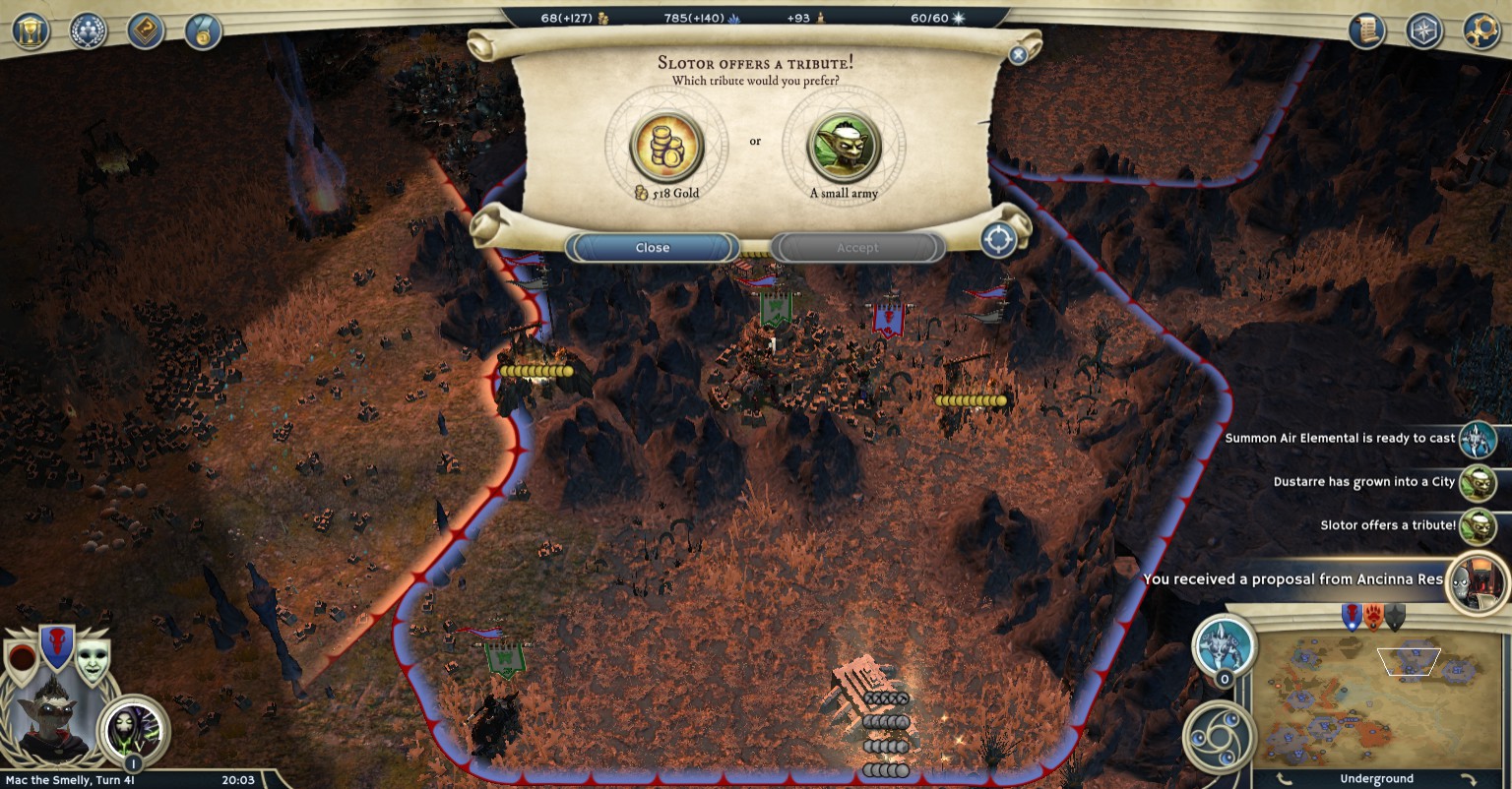 A short comment on my starting location as well, it was a great defensive spot, with no UG/Surface entrance, and unpassable rocks all around it, just 1 way in and one way out.

Thanks for the game Skuns, was a good match, and I think if you was more aggressive around turn 22-27 it could have turned out differently. 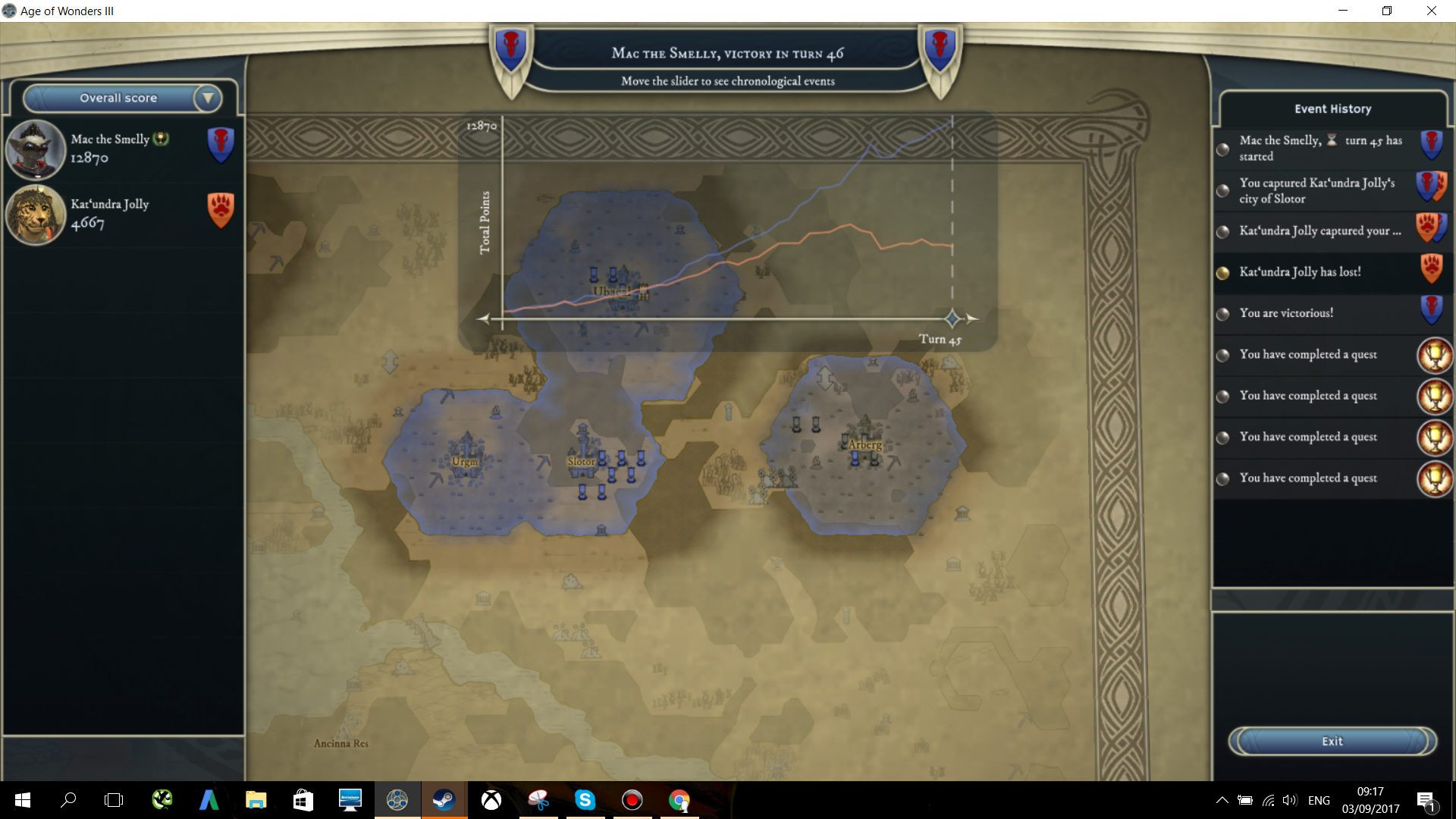 I've decided finally to surrender)) There were no ways to fightÂ

I was merely looking for an update, as I didn't know what was going on!
If you are unusually busy or something else turns up, of course I understand you won't be able to make your turn in a long time.

I never advocate for a turn timer, but after 4 days you forget most of the things you wanted to achieve, or what plans/strategy you were thinking about!

Hi. Sorry again for the delay, as I said earlier in the chat. If you insist on the turning on the timer, I'm not argue. So fine - I'll turn it on. WhichÂ period do you prefer? 1, 2 or 3 days? I'm good at least with 2-day period. And if you want I can surrender immediatelyÂ to let you more exciting chance to fight with other playersÂ

P.S. You're I must haveÂ more aggressive strategy)) But I'm always trying to save as more good units as possible to the final fight)) And my scout strategy still not so wellÂ

Hello Skuns,
I hope you are well, but I think we should put a timer on the game if we cant do a turn in 72h and no message. I would love to make a rematch vs a finalist in the last duel tournament, its good practice!
You need to be more aggressive and take more chances, I didn't play so well in this game.

Sadly the game crash during replay of battle, I attack you first time 4v1 and lost 2 fliers, and when I watch battle the hell hound kill your tigran then crash. 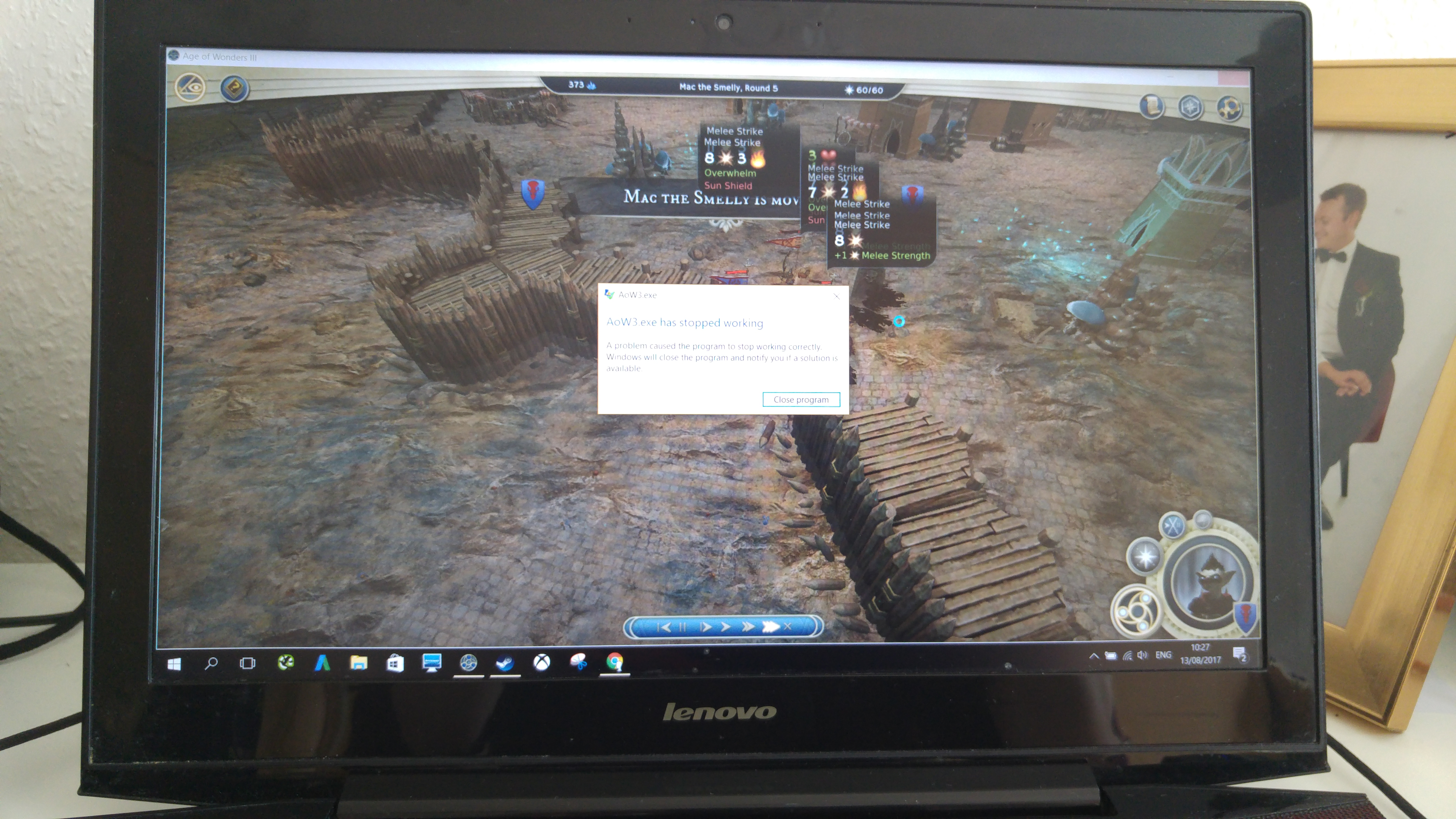 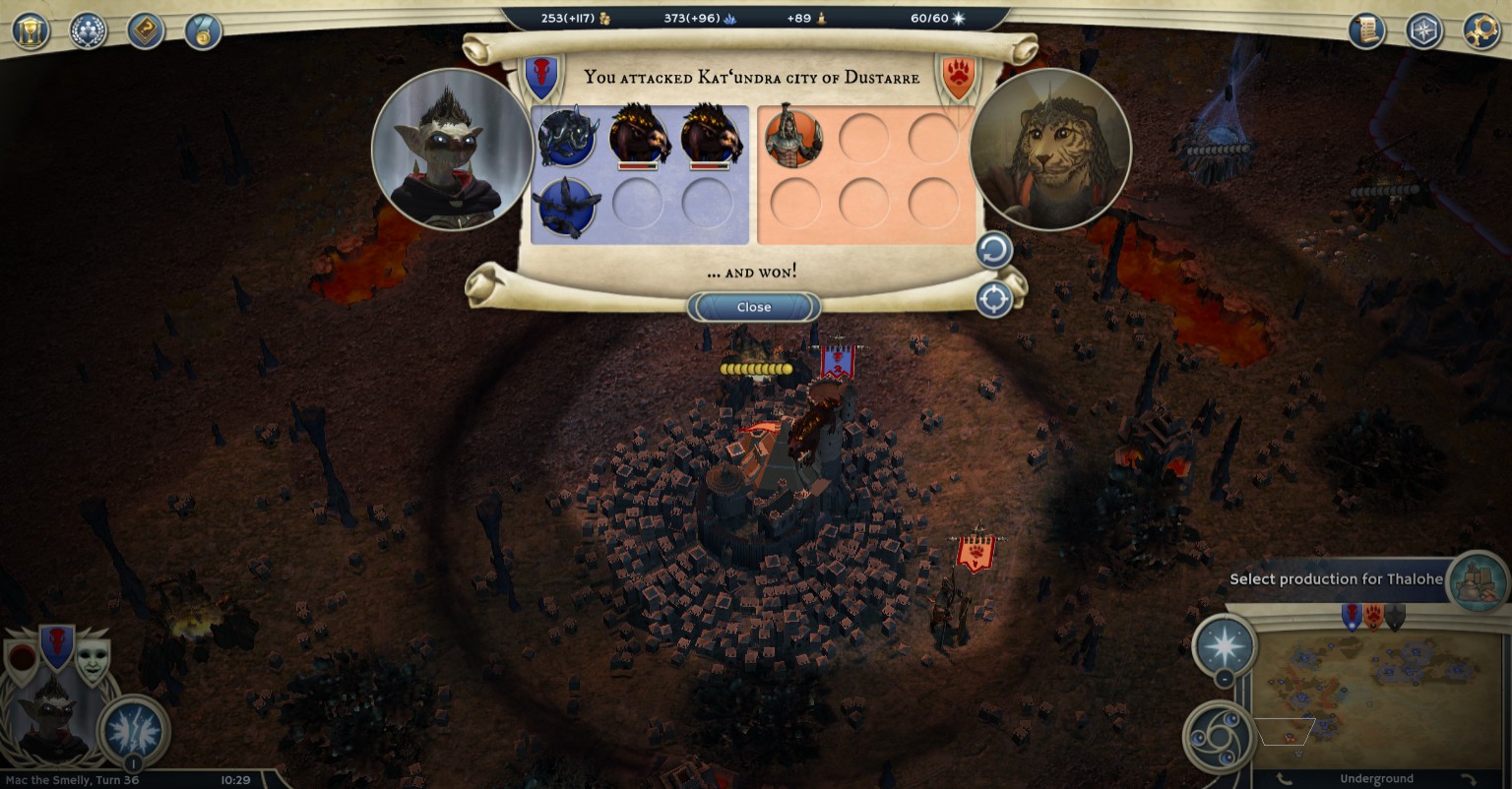 Thanks for your words.Â

Â  But it's notÂ so much a wise strategy as a forced one.Â

Â  I mean the protection of a inns.

Â Because I was trying to protect my rear. And obviously I was very lucky in that fights.Â

Â  Because a scout is not so much strong as a sunguard. )) And also that reason (to protect my back) was one of reasons why I didn't clear Shrine of Angel which is located nearby. I wanted try to use it to clear another legendary site but IÂ I thought carefully and changed my mind.Â

As for a protection ofÂ watch tower, maybe it is too early to say this.Â

Â  But, as you could see my territory near my main cities, there areÂ two narrow isthmus. And I had a plan to protect both by 3 full stacks.Â

Â
And now I realize that I haven't enough resources and enough time for this plan.Â

I must say I'm very impressed with your tactics, even though I feel I have been on the wrong end of some scout battles I should have won! I never thought of guarding inns and watch towers as strong as you have, probably very wise strategy!

Hi Skuns, not to worry! Take your time, we have no timer to finish our game!

I hope you have less stress in the future.

HiÂ Marcus. I was too busy these days and was tired a little. Sorry for the delay.Â

I'm straight on the other side of the map from youÂ

Â  There is almost a stone's throwÂ

Well I have played 9 turns, I hope you didnt just play 7, hehe

It's 7-th turn and your location are already near my domain?!Â

And who isÂ Yedi Yoda?Â

Â Simply my English is still not perfectÂ

You speak in mysterious ways, sometimes impossible to understand, but I guess also Yedi Yoda was the same, so I guess its part of the game

All empires are different and evolving by different ways. Therefore the small nation, which lost against one empire, can win with great superiority against another empireÂ

As I understand even if we will end soon this session we shouldn't report it for some period of time?Â

Â  under such experienced leadershipÂ

I see it more as a battle of small empires. A small nation (a new player) enter the territory of another small nation (another new player) and they fight over this new territory to be able to fight the larger empires (more established classes) in the future. Therefore I also choose a small nation to enter the battle!
Published on Thu, 13 Jul 2017 10:06:27 +0200

Hi. I'm glad to see your wish to fight with meÂ

Â  But it will be a training session, so I can'tÂ promise that it will be good or interestingÂ

Â  Though I will do my best for thisÂ

Â
Good luck and have fun))

i can play if you host another training match

Hi everyone.
This is PBEM duel session with the tournament 1vs1 settings and the beta branch of the balance mod. Despite the fact it is the tourney training session everyone can join it. Are you a veteran or a beginner Â on this site it doesn't matter. I like to meet new unexpected opponentÂ

I will create this game later on AoW3 server.Â
Game name will be "Skuns training game".
Password: Â 852