Your leader's name did amuse me.

By the 'Sin Eater' part I felt outright targeted, but fortunately this Sin wasn't eaten this time.

So, if my memory doesn't fail me, this was my first match as Dwarves. I don't mean it as an excuse, I kinda expect from myself that after playing AoW3 for as long as I have that I should be able to play any race with some decency.

And it went decently (aside from losing my hero on turn 8). I didn't think I was doing particularly bad, but when I ran into the Ogre vassal, the Frostling vassal and, a bit later, Naga vassal of Refineus, I had to realize I was very slow. I think it was turn 22 when I noticed he already got the Ogres in the middle of the map. At that point I only had my racial town, an outpost and a Goblin vassal underground. I did spend a little time underground, but there were way too much wetlands for my liking to continue.

So, I decided to gather my army and went to see if I could take any of Refineus' cities. I suspected he had the economical advantage, and that if I tarried I would fall behind. East of the Ogre dwelling I went north along a road until I found his racial vassal (I think), but it turned out he had his armies nearby, too, he had like three stacks, while I didn't even have two. 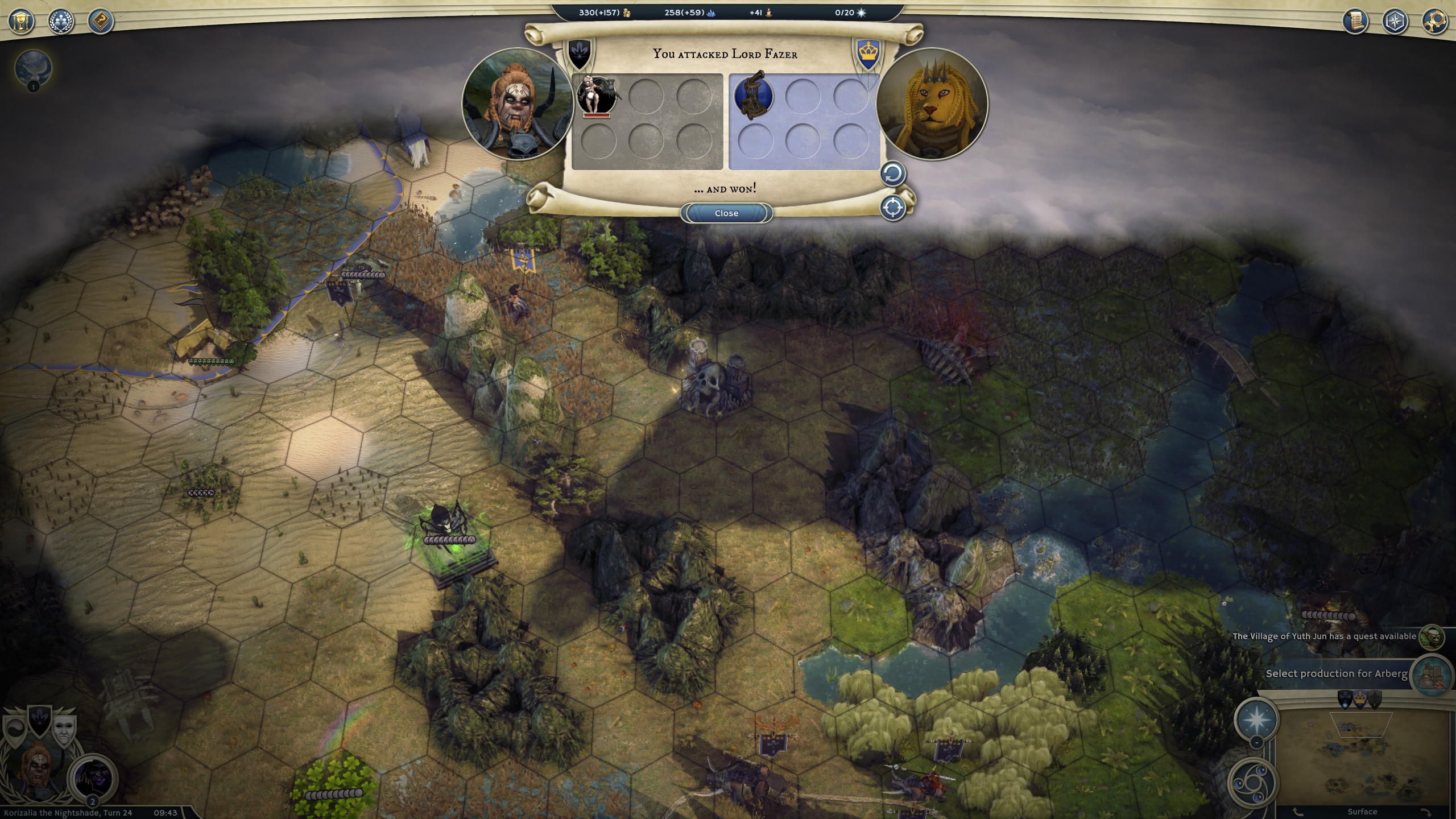 I ran away. It appeared he didn't follow with all his armies. On the picture below you can see they are split. I hoped to attack his lone stack riding through the mountains, but I lost two (if I recall) units clearing sites. I didn't have more movement points to run, so I positioned my dwarves on the mountains and hoped for the best, in case Refnieus attacks me. This resulted in our first battle, mentioned in his report 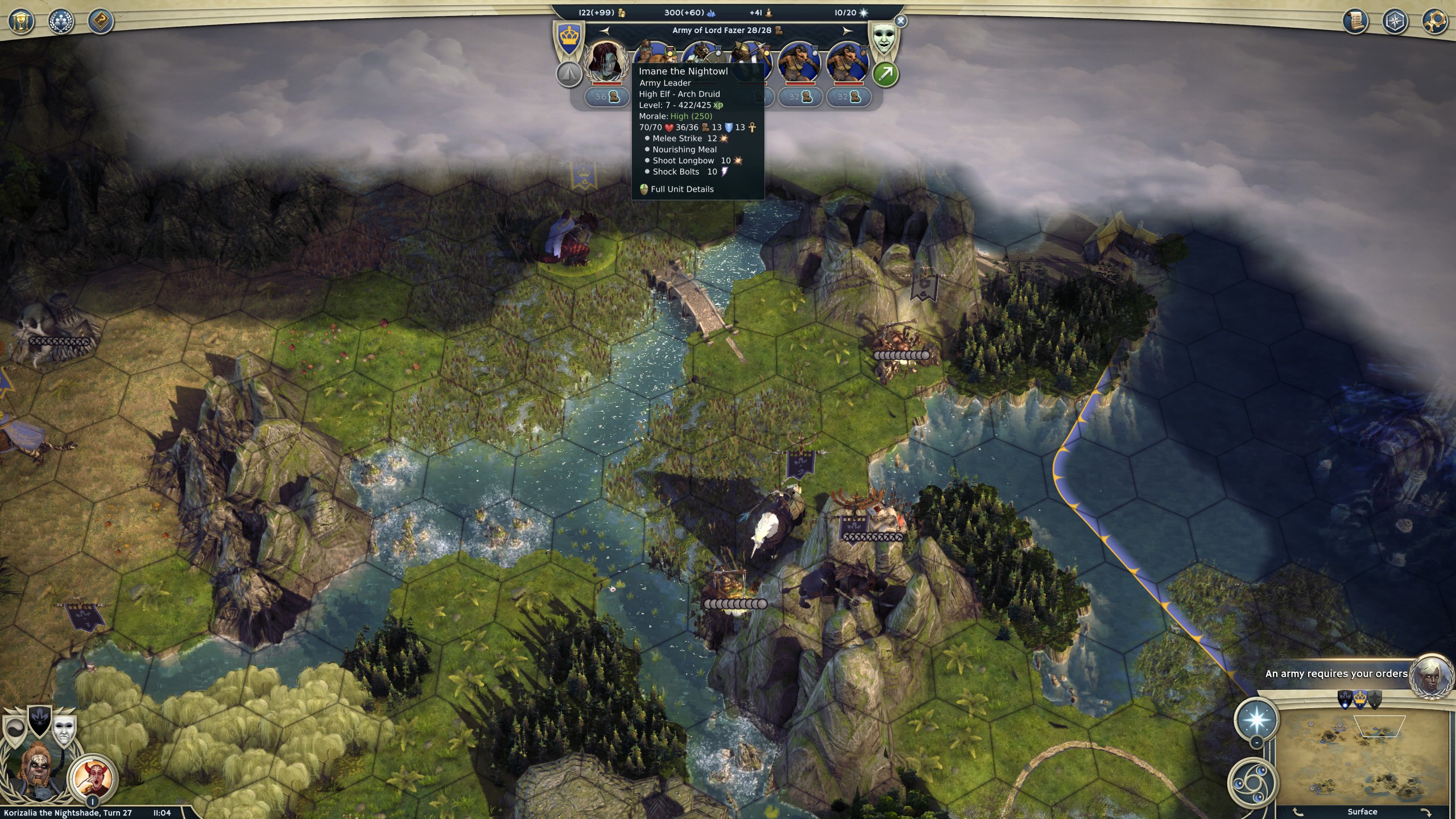 I ran home with my surviving leader and converted Elven Longbowman. I also called back my AD hero from underground, and failed a Sylvan dwelling quest due to it. I was really undecided about whether to continue clearing and questing on my AD, and ran back and forth a lot.

Ten turns later Refineus arrived with about three stacks. By then I got some Evangelists going, but no success with converting. We danced around here for a few turns; me back away slowly, hoping he would attack on a for him bad terrain. 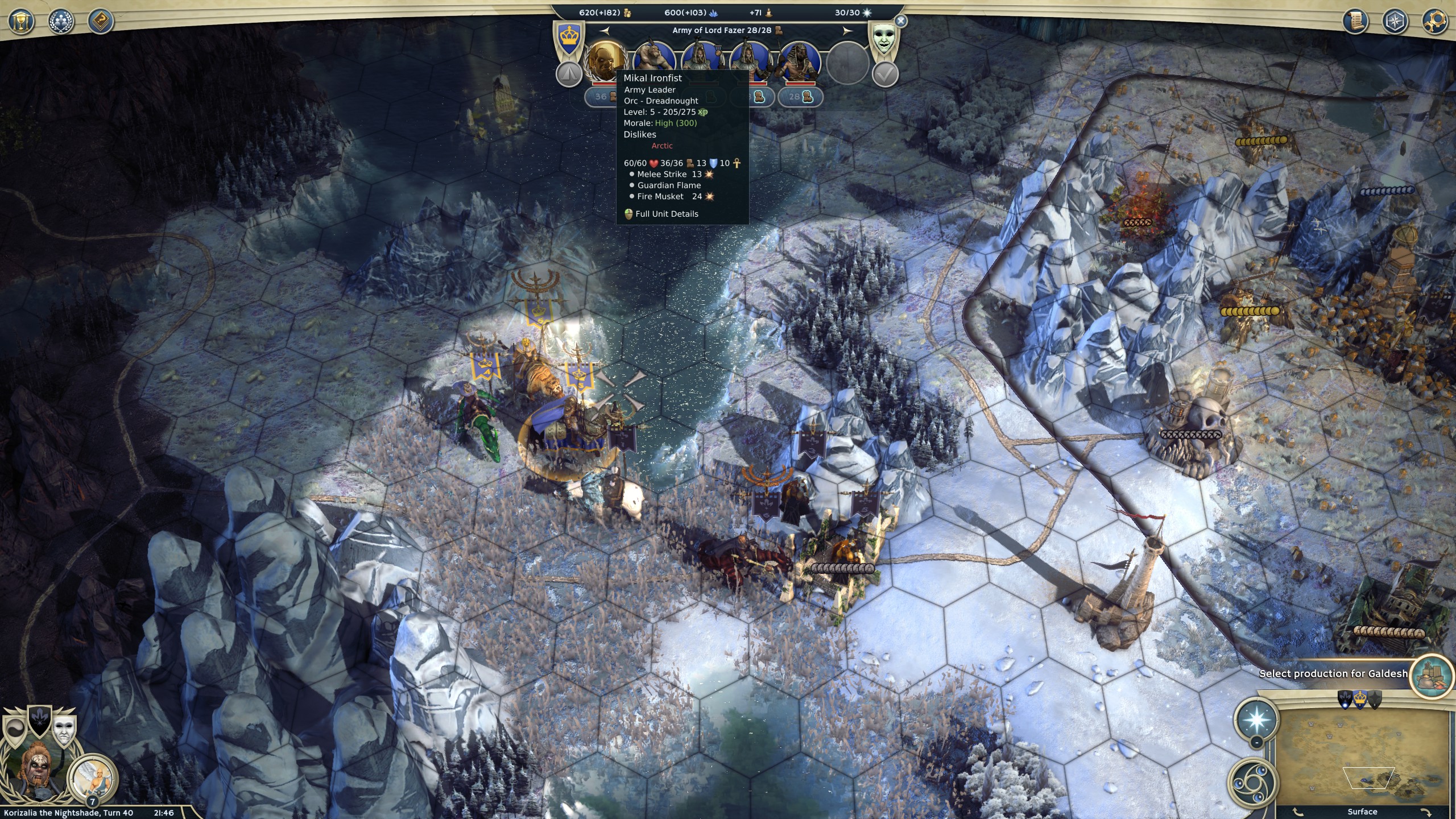 Then that mistake happened, Refineus mentions in his report, and so our second battle concluded. After clearing up his remaining hero there, I went to take his Frostling vassal on the southwest. I figured I needed to do some economical damage, and gather more units before I could move against him, because I thought he could swiftly rebuild and army due to his superior economy. I took my sweet time to clear the Academies, Sphinx and the Tavern around the formerly Frostling, now migrated Dwarven city. Finally I managed to get some converted units and some T3s from Taverns. When I was about to start moving north at turn 50, I spotted that Refineus (blue) was coming south this way with almost full three stacks. 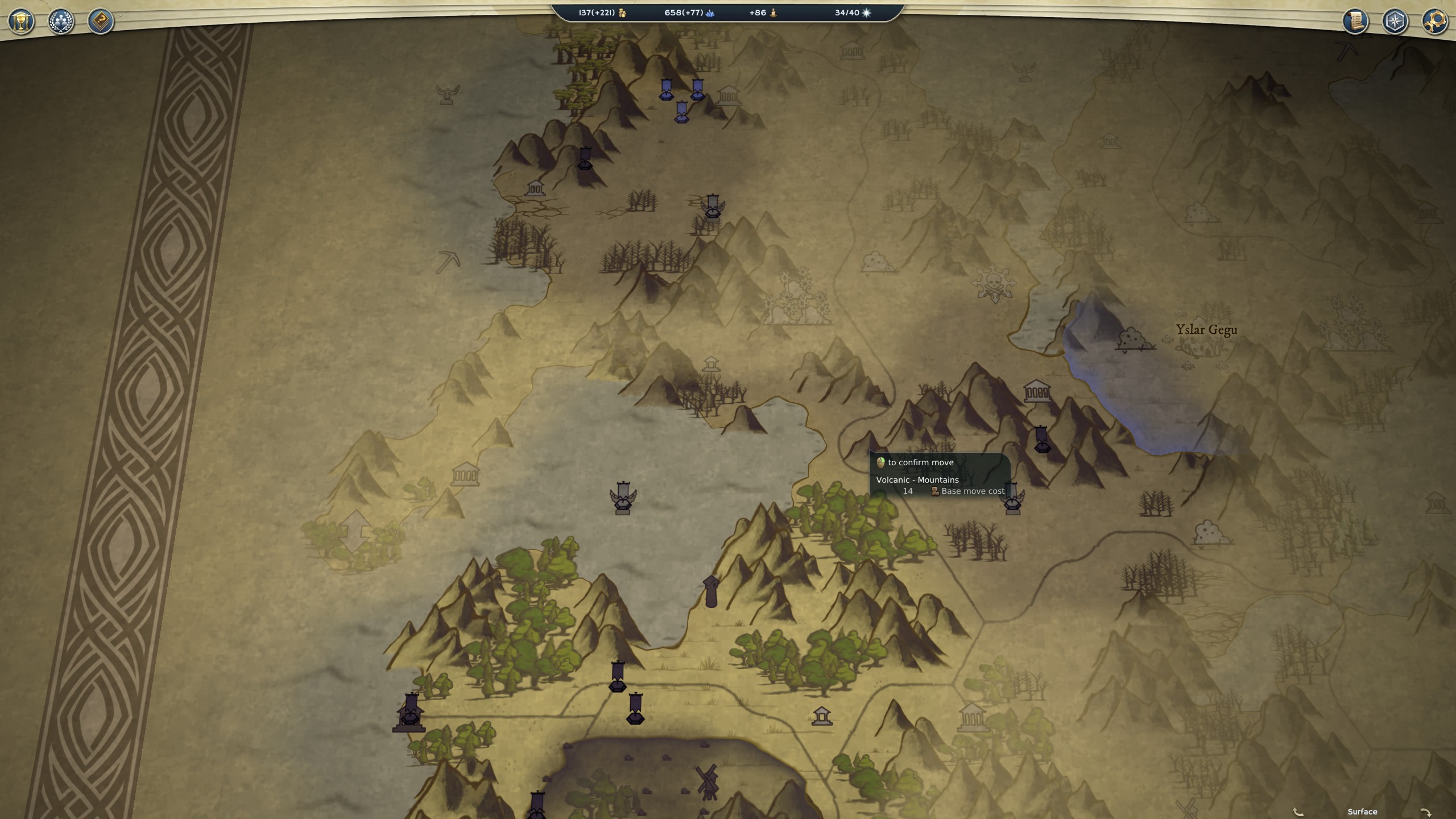 I went and waited for him at the intersection. I was confident I could beat his army, at this point, but I didn't want him to run away, so I placed some Cherubs close by hoping he would move to attack them without spotting my armies just a bit south, giving me the opportunity to attack him in the next turn. He seemed to do just what I planned, though he did notice my closest and weakest stack at least, because he casted Mark Heretic on it. So next turn I attacked it, which concluded our third and final battle. 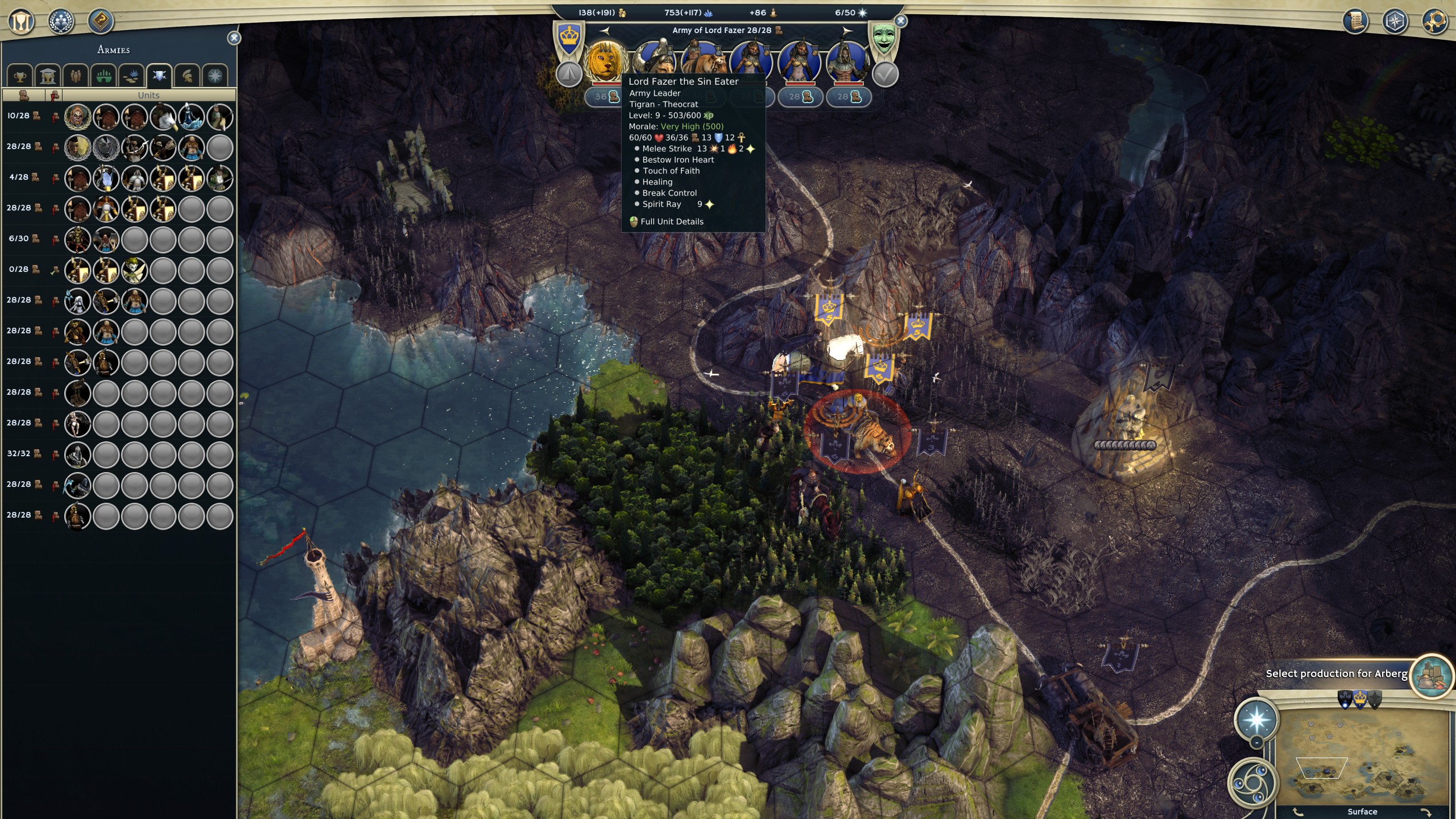 It took me long ,but shortly before this battle my leader manage to get to lvl 13, and I got enough points to spend on Resurgance. I didn't calculate well before..

Nice match. Thanks for the game!

I'll write a summary later, but here are the score screens. It seems it was a very close game. 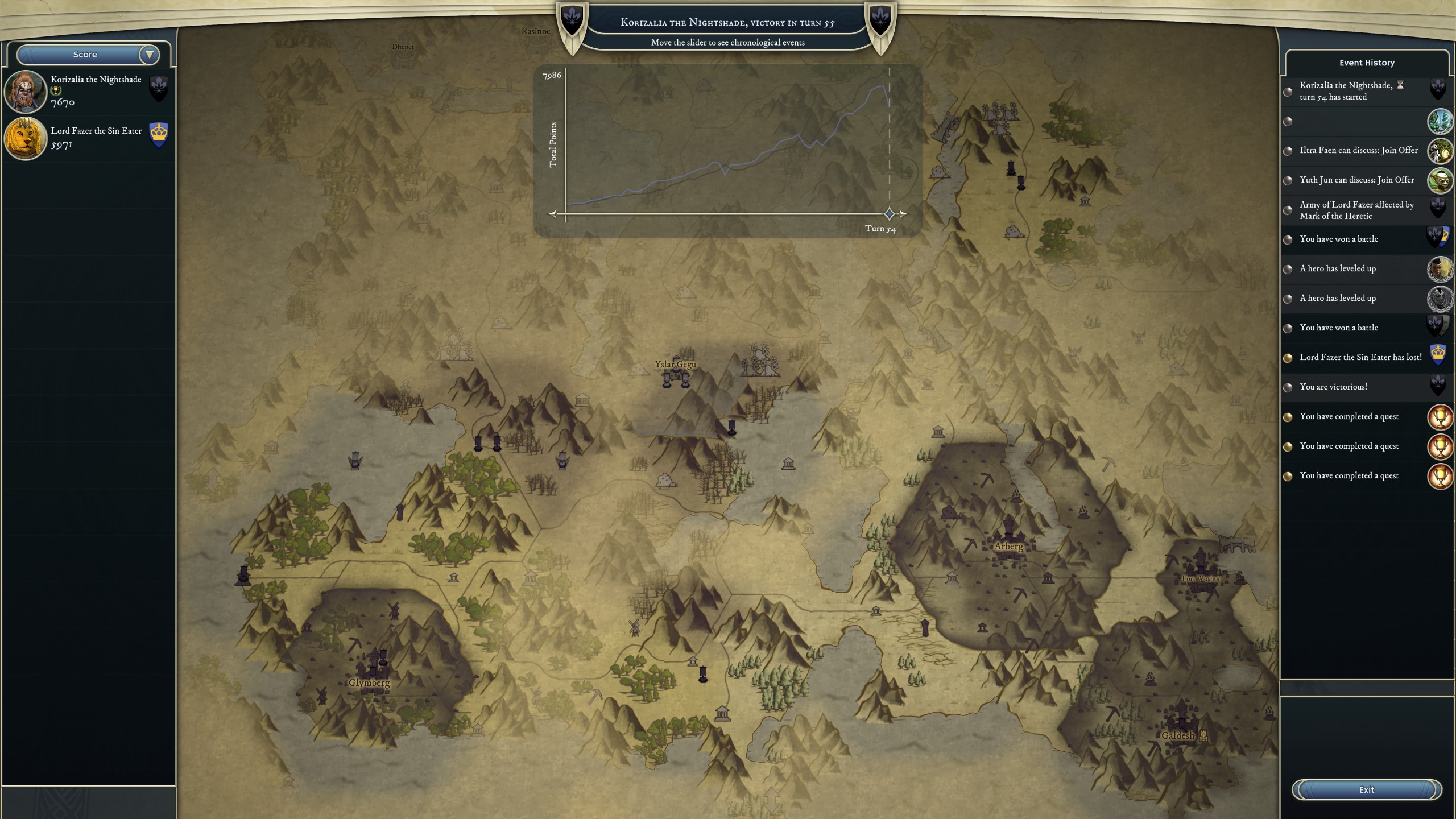 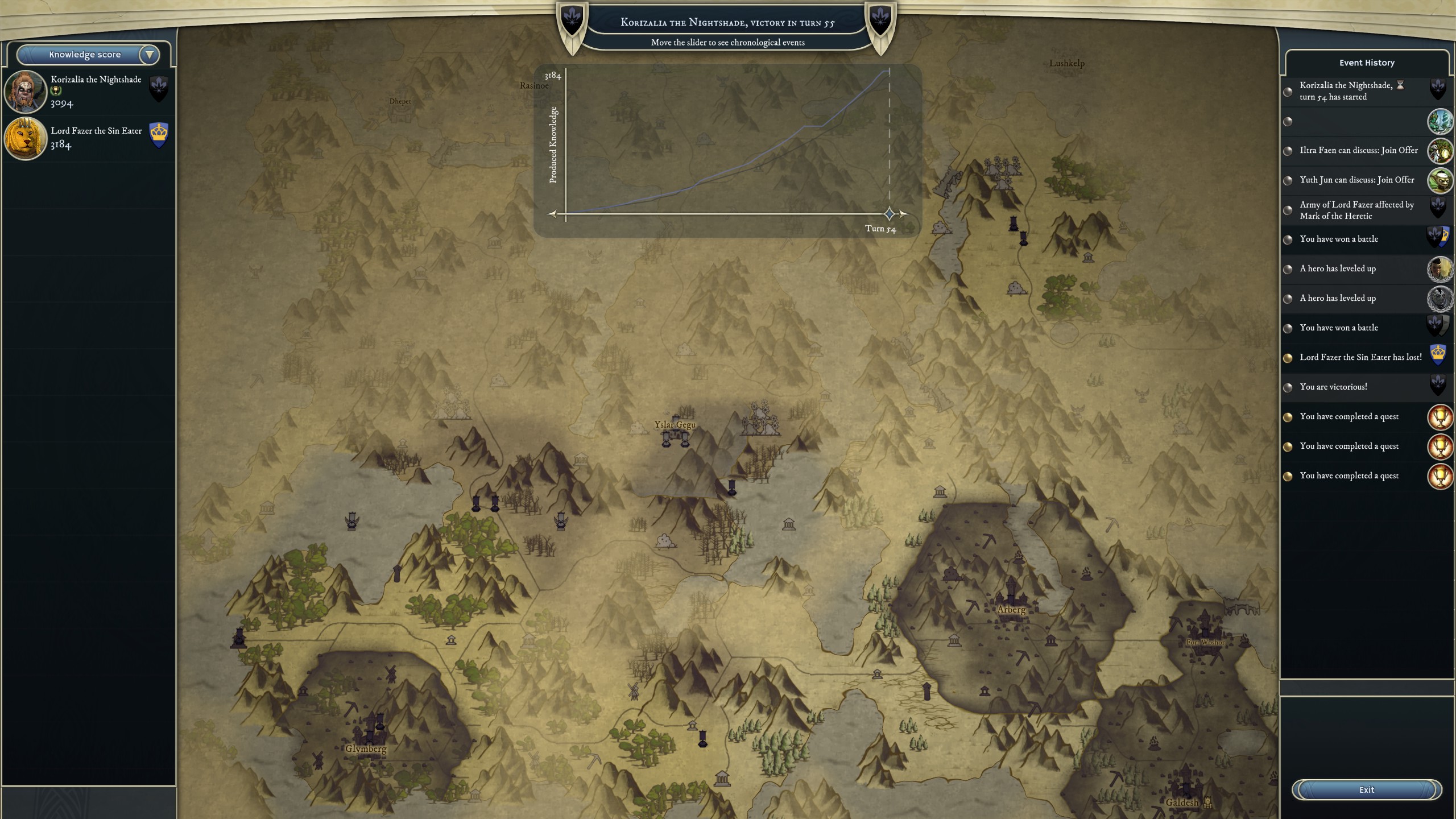 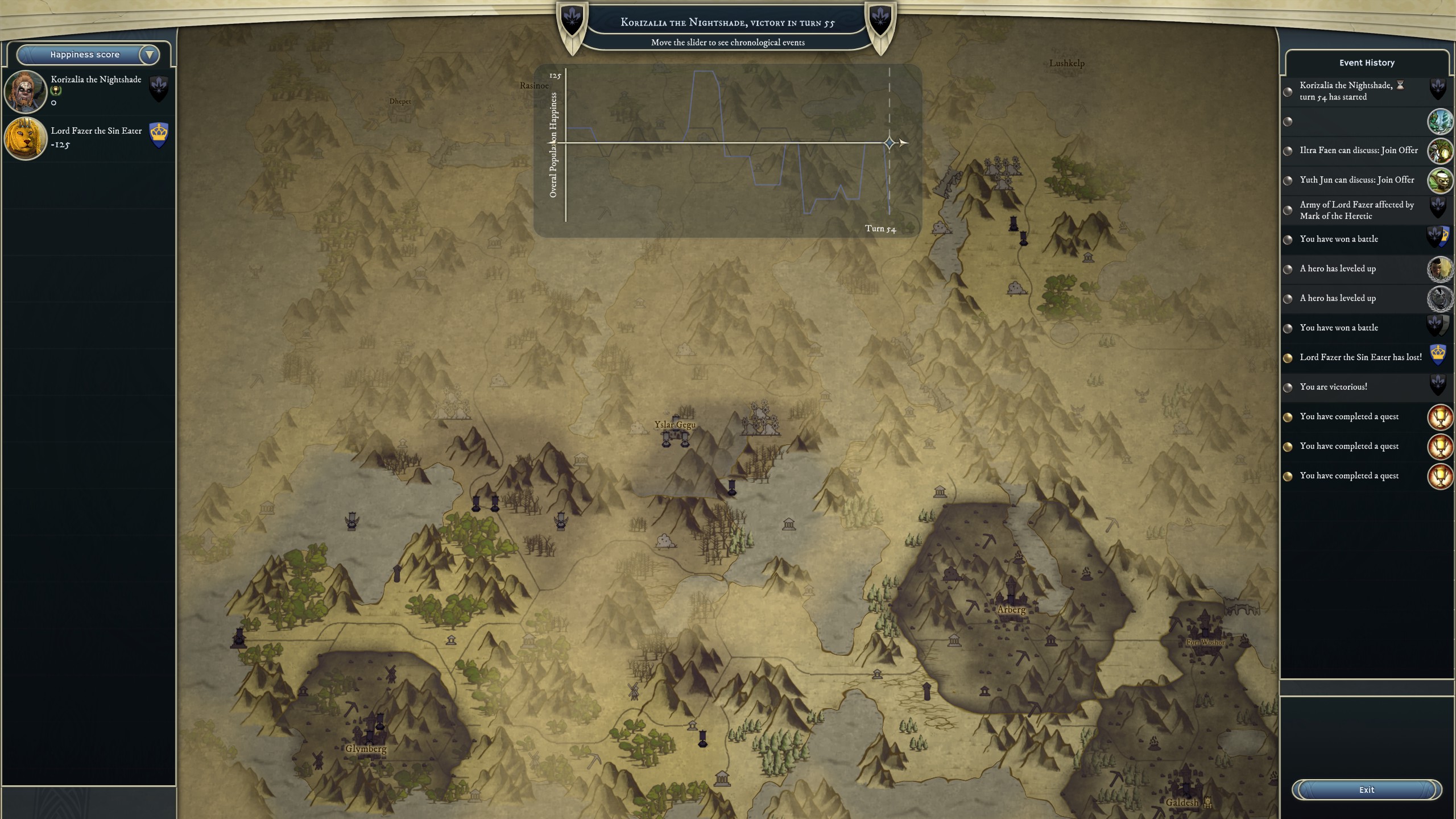 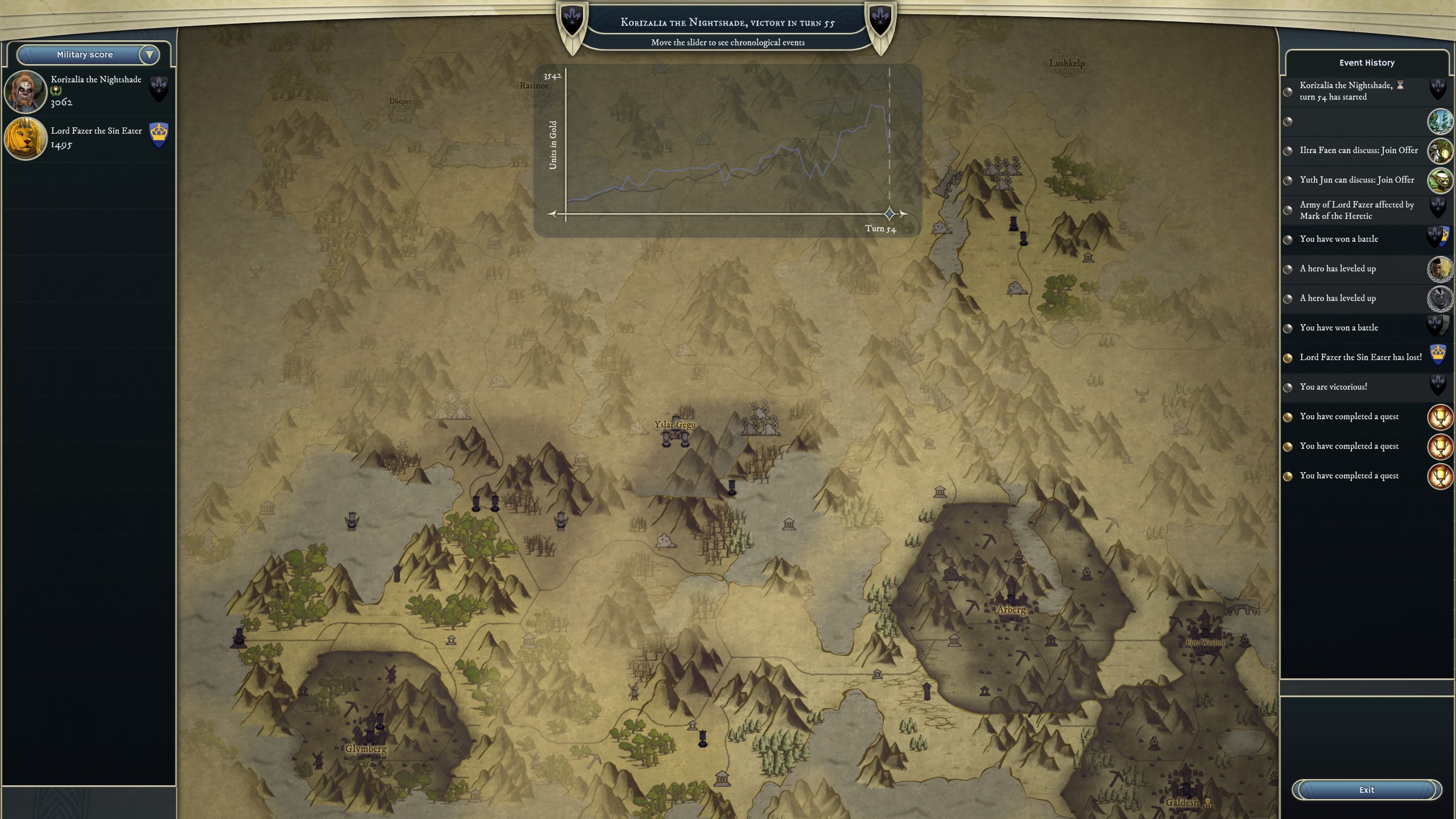 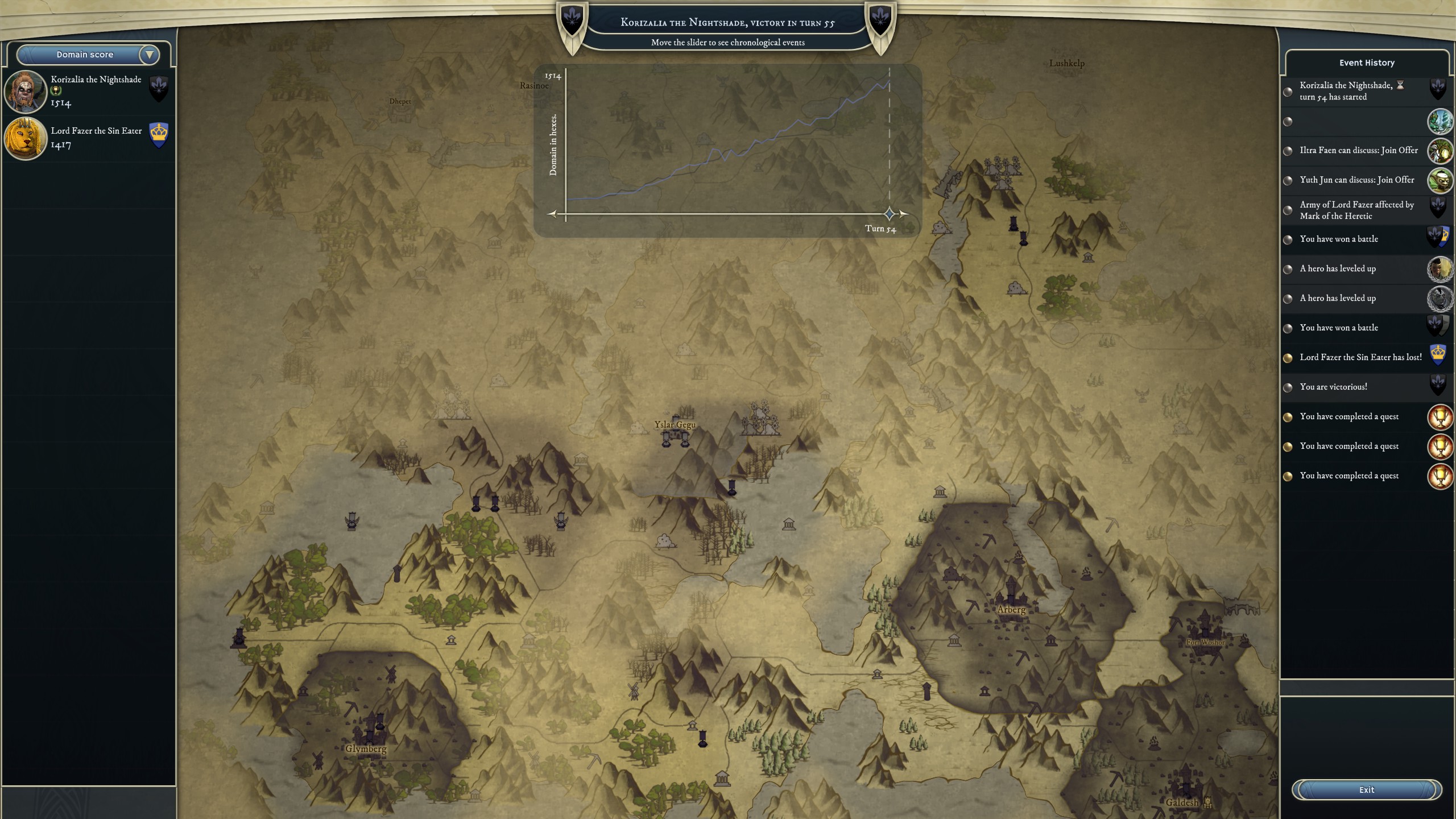 (The finnish company brand name did not go in my favour) =( 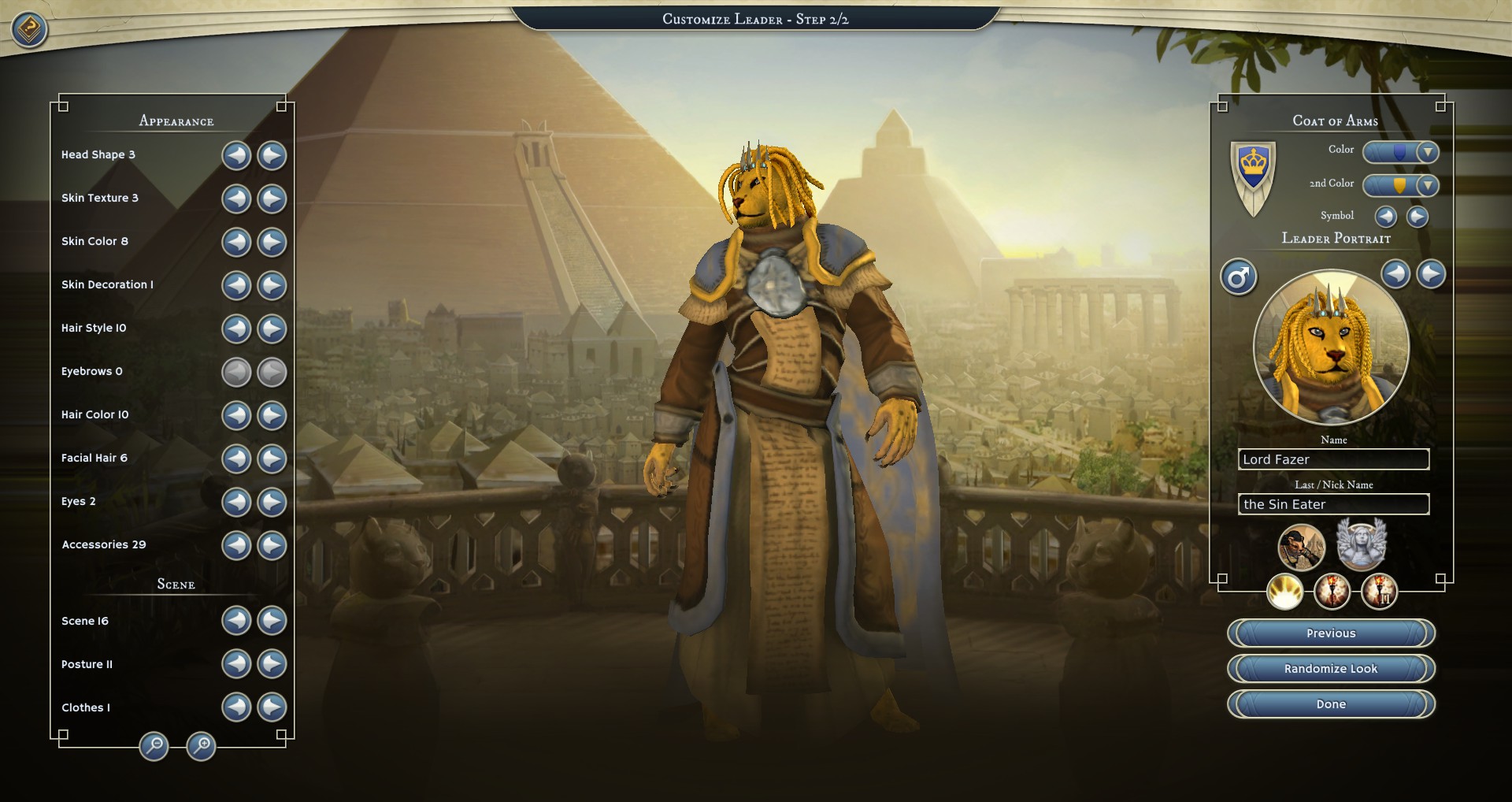 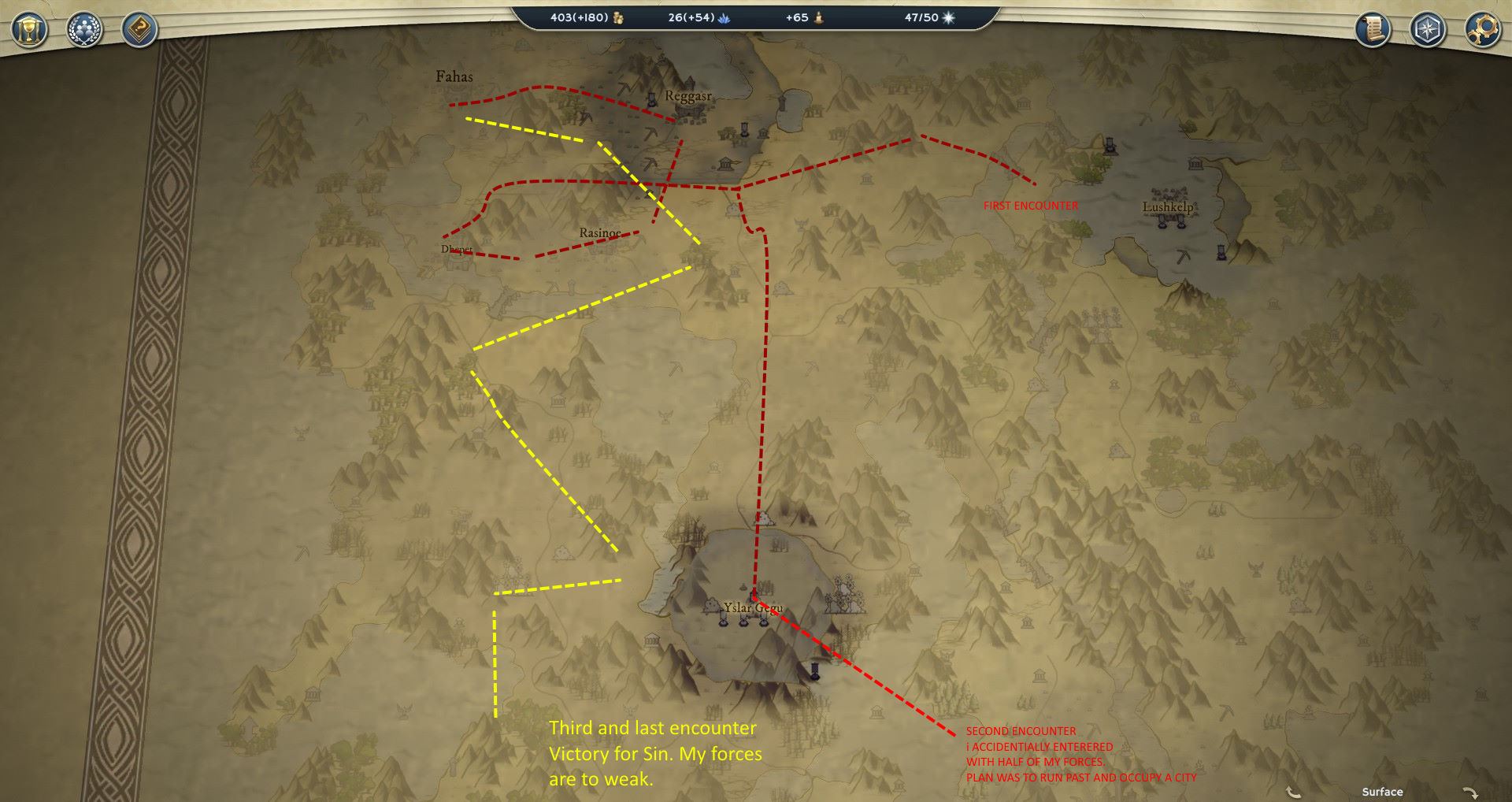 I could initially say the first half of the game was decent. Not my best as this is probably 5th time I try Tigrans apart from single-player games. It's way too much hassle to survive with those furry friends. In the first encounter, I accidentally run into Sin's leader. He survived, of course, standing on happy terrain is the ideal thing. One can try at least. maybe 1 tile to the left next time, but think it was half decent trade. 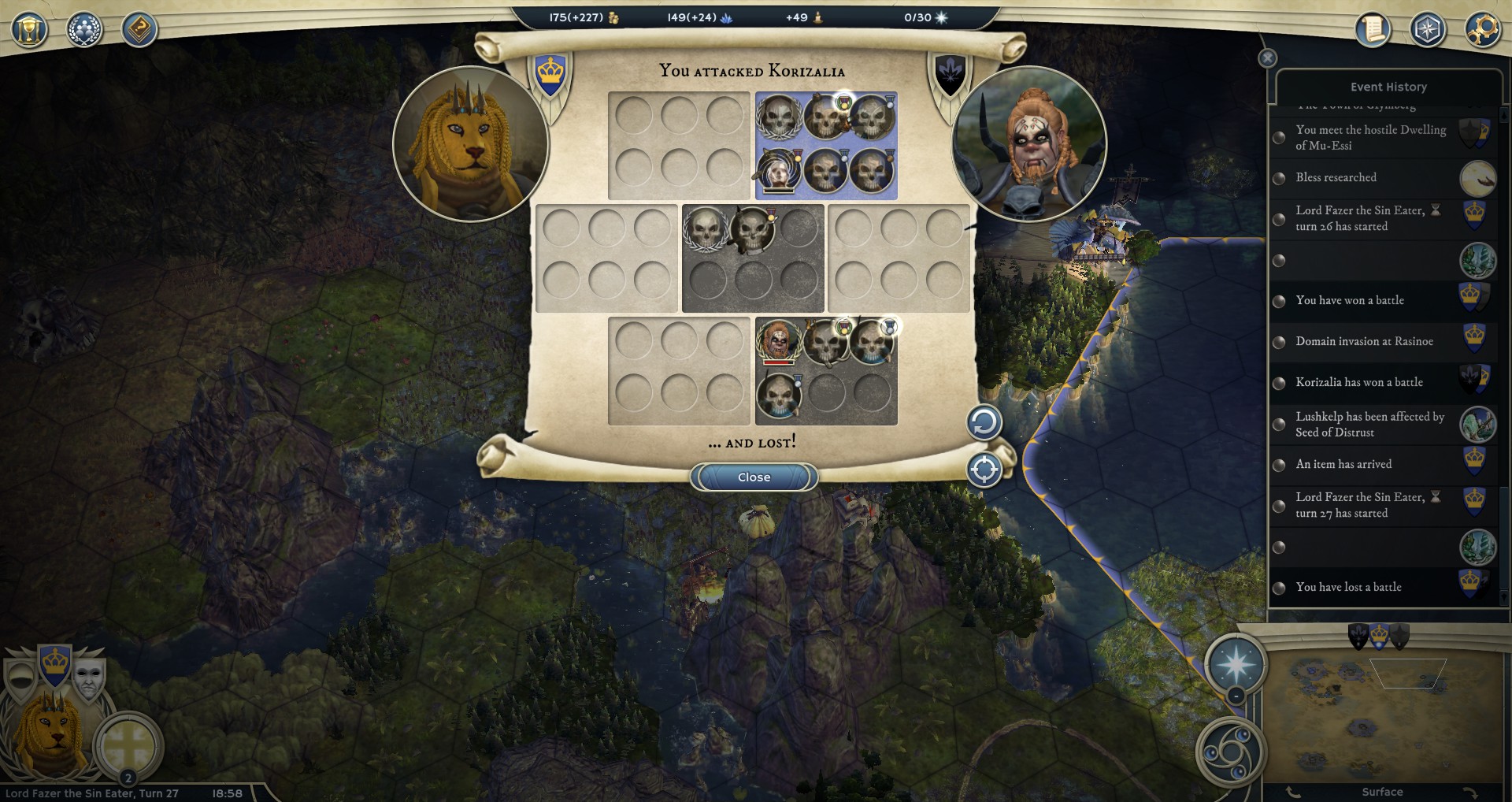 I moved my leader and gathered the rest of the pack. I continue to march south to beat him in his cities at home. The plan was to secure Heart of the Artice on the way down to have a winter advantage. Did not get to that really, but I move essentially everything I had. Three stacks, support inbound from a nearby frosting vassal and units from a giant dwelling. The plan was to rush cities and beat Sin in speed by overtaking him and putting him in a siege position as I was thinking SIn would run home.

While I managed to overtake his forces and only be 1 turn away from his 1st city. However, for some specific reason, I was going to look at a hero of his and manage to trigger a two-stack vs three-stack battle. Which... was not really the plan. I could not cancel and neither prevent it from happening. It just auto fired. It's the last time I will ever look on an enemy stack. This ruined essentially the rest of the game as it was the most critical point in the game where it was either a victory or loss. 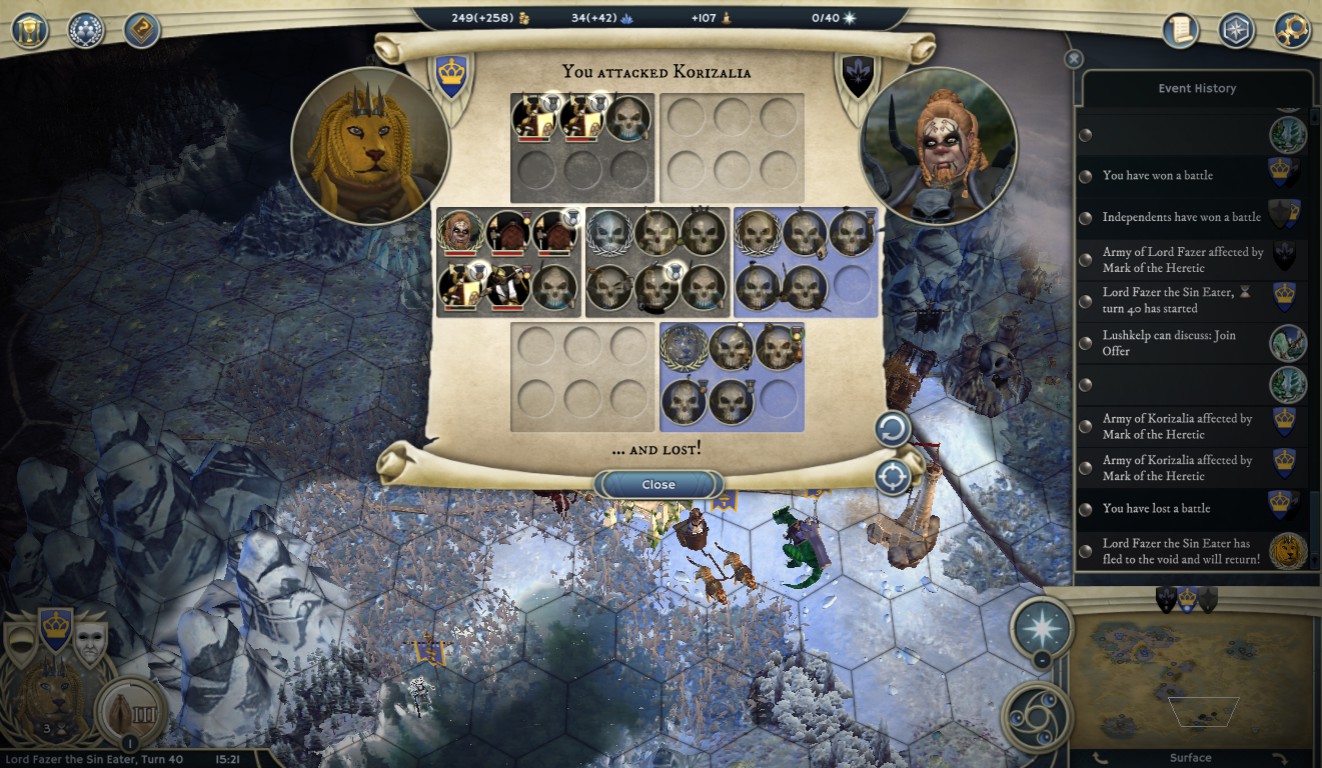 However, I had plenty of eco left to maybe...one last shot.

I expanded quite well, but I had almost nothing after the second encounter. To scattered and almost no levels on my newly bought heroes. The third encounter becomes too much facing golden evangelists. (Should have gotten those too.. O___O They rock!) 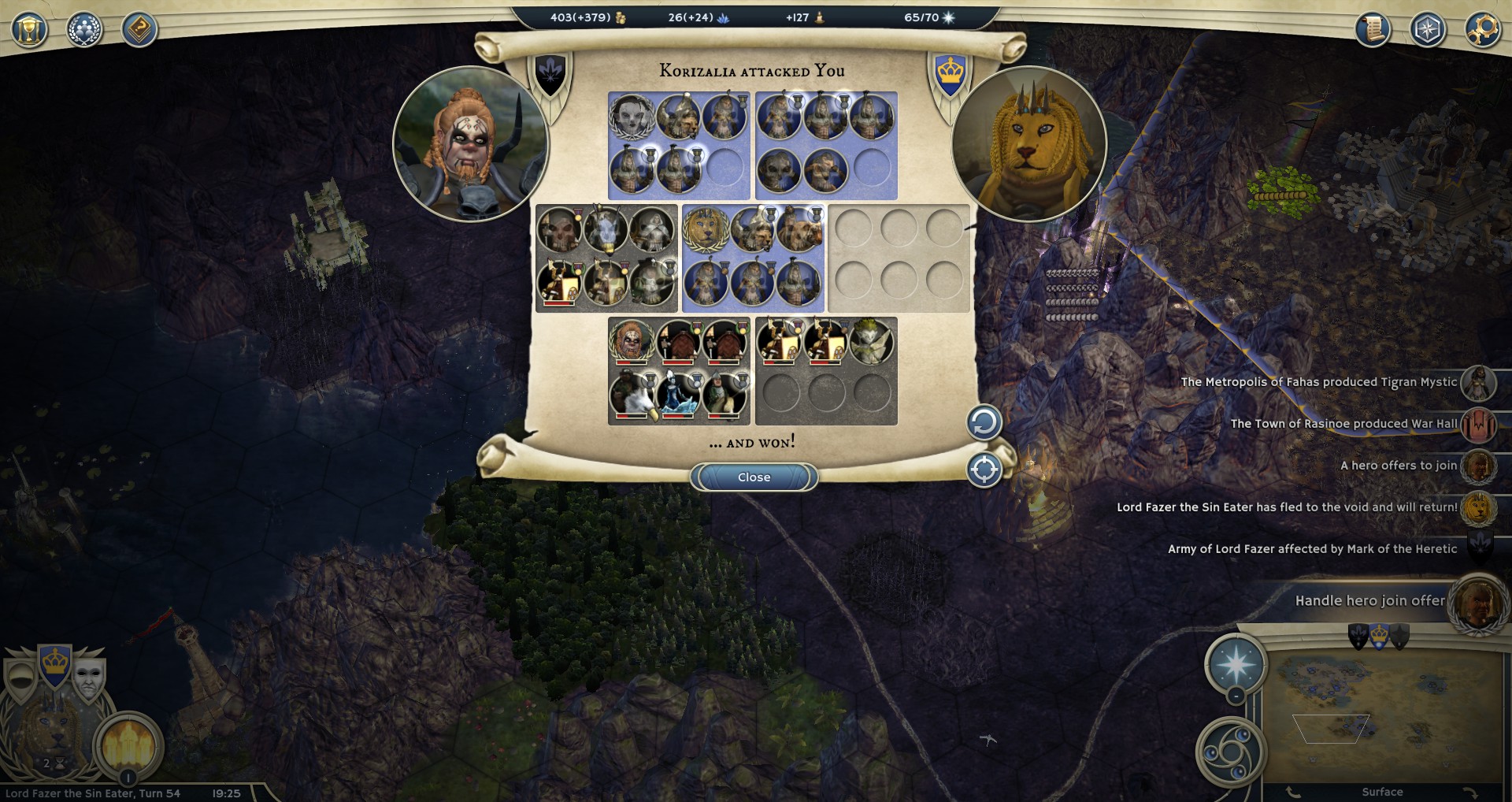 So after chasing down, the final battle. It was too much to bear as I lost a sphinx in a battle just before. It was a sneaky ambush caught. Perhaps running to Sins' throne cities would be a better choice than trailing down for a lost vassal city. The main force of SIn was there after all.

Good game. Fair and well. Despite Sin not being an annoying Rogue, he still had "Shadowborn" and cast Seed of Distrust to little resemble the quirks of being sneaky and to annoyance by cancelling a lot of quests and stuff.

I can't wait to read the report on this game

Hum, 1 turn revert means you can enter your turn again Refineus. But if you had played it, it's probably at the end of your turn. Do you confirm it's what happened?

Then there is two options to allow you to replay. I should explain by private chat message if you confirm it's behaving as written above.

How do I revert turn? The option is greyed out when I look at it in the game list. I haven't started my turn yet. Or can only you revert, Refineus, since you created the game?

If Sin agrees, then OK but personally I would not be very favourable to such a revert especially without videos and screenshots etc. as it opens the door to many abuses.

But to be clear: please go ahead with the revert and continue playing.

I would say that I would not benefit in a way on revert. As no battles occurred except for a Cherub Vs Cherub.

This particular battle is game ending. If Sin attacked me following turn and won straight away against those 3 stacks In a triangle I would certainly be satisfied about losing. I still had movement to reorganize another 3 units. But the autobattle just triggers super fast.

I know it is against the rules. But these rules are in place to provide fairness between the participants, no? If I, as your opponent, agree to the revert, I think it should be allowed. But, we could see what Hilliadan has to say.

Yeah, I think it would be ideal, but ideally, as a tournament game it's clearly against rules to revert this kind of... battles.

I did not take a screenshot as it was too fast for my reaction speed. Misclicks and well this kind of declare war events on vassals and dwellings happens.

I sort of speeded ahead of your forces and well then just click on one of your units that essentially triggered a battle I did not want to do at all. Most likely due to the ancient ruins that you were standing on.

Probably not. I managed to misclick and attack straight up. Which yield a bad stack formation.

It... literally did not abort the attack and just pressed the attack without the ul showing no option to cancel the attack. So I essentially served Sin the victory now failing my plan.

Hi! What turn have you reached guys?

Hi! Perhaps it's better we start afterward then. The coming few days are going to be busy for the both of us, anyway.

Its possible to start whenever you want.,

Meanwhile, I update the game with the team. Se pics: 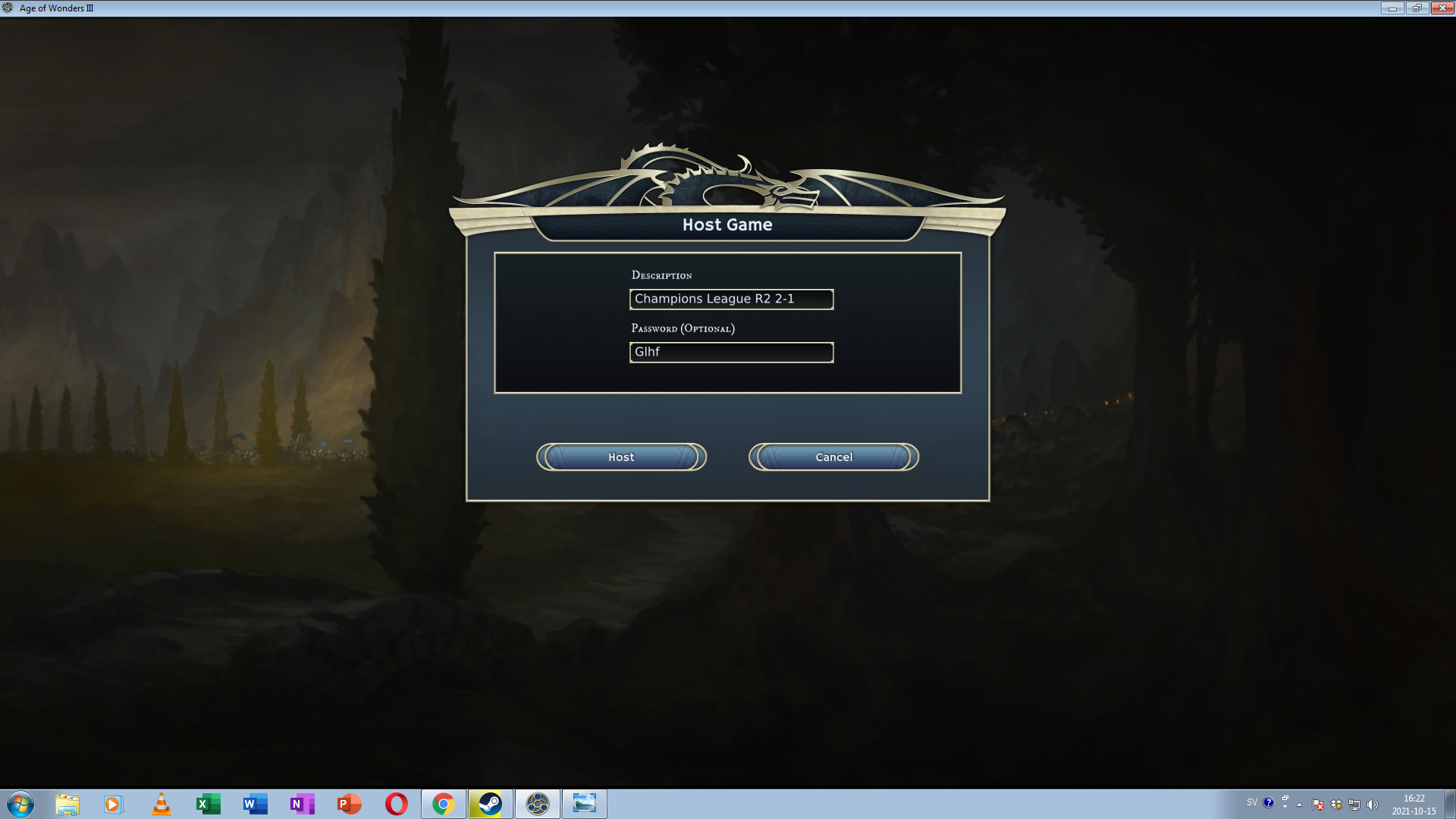 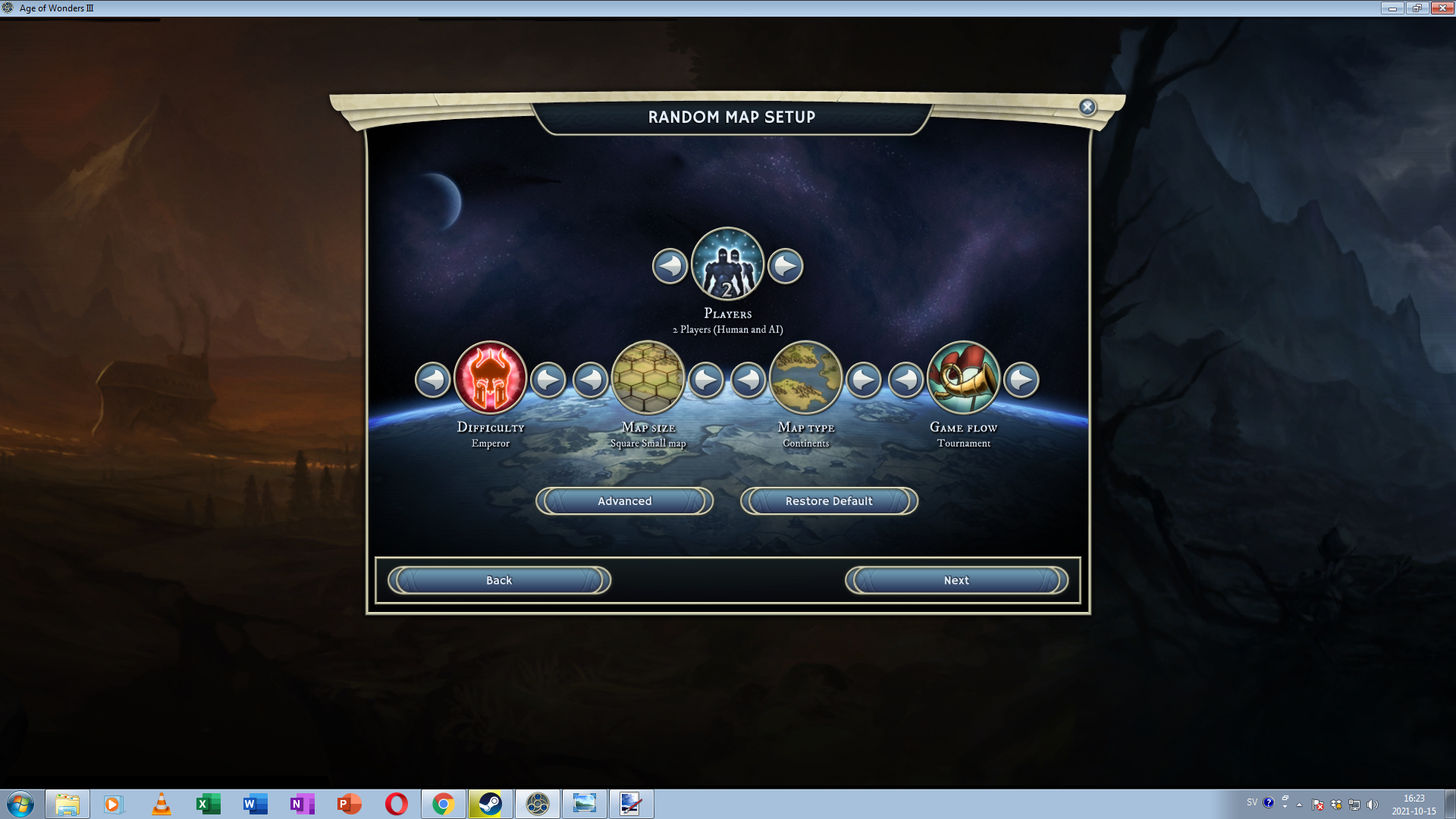 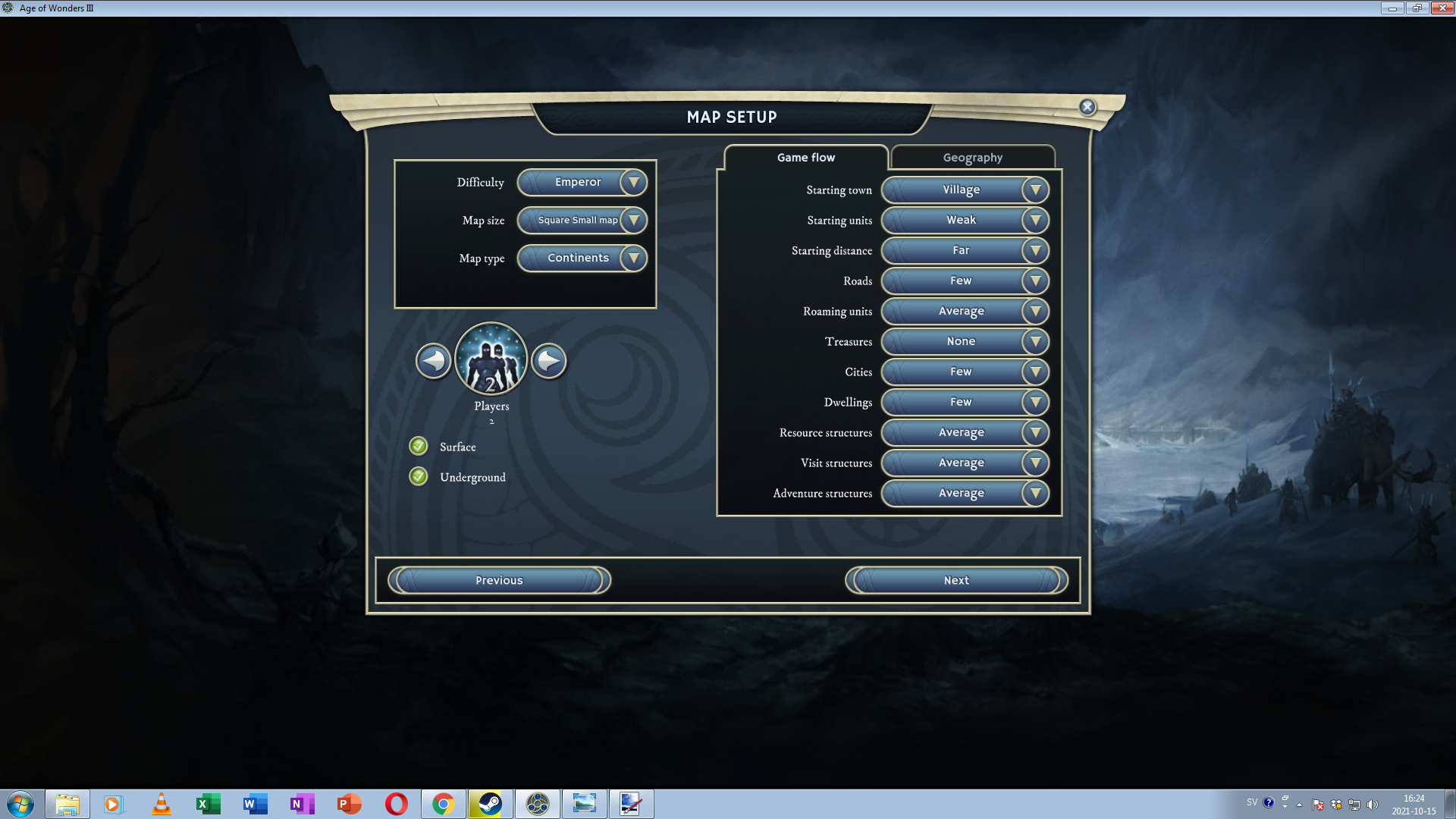 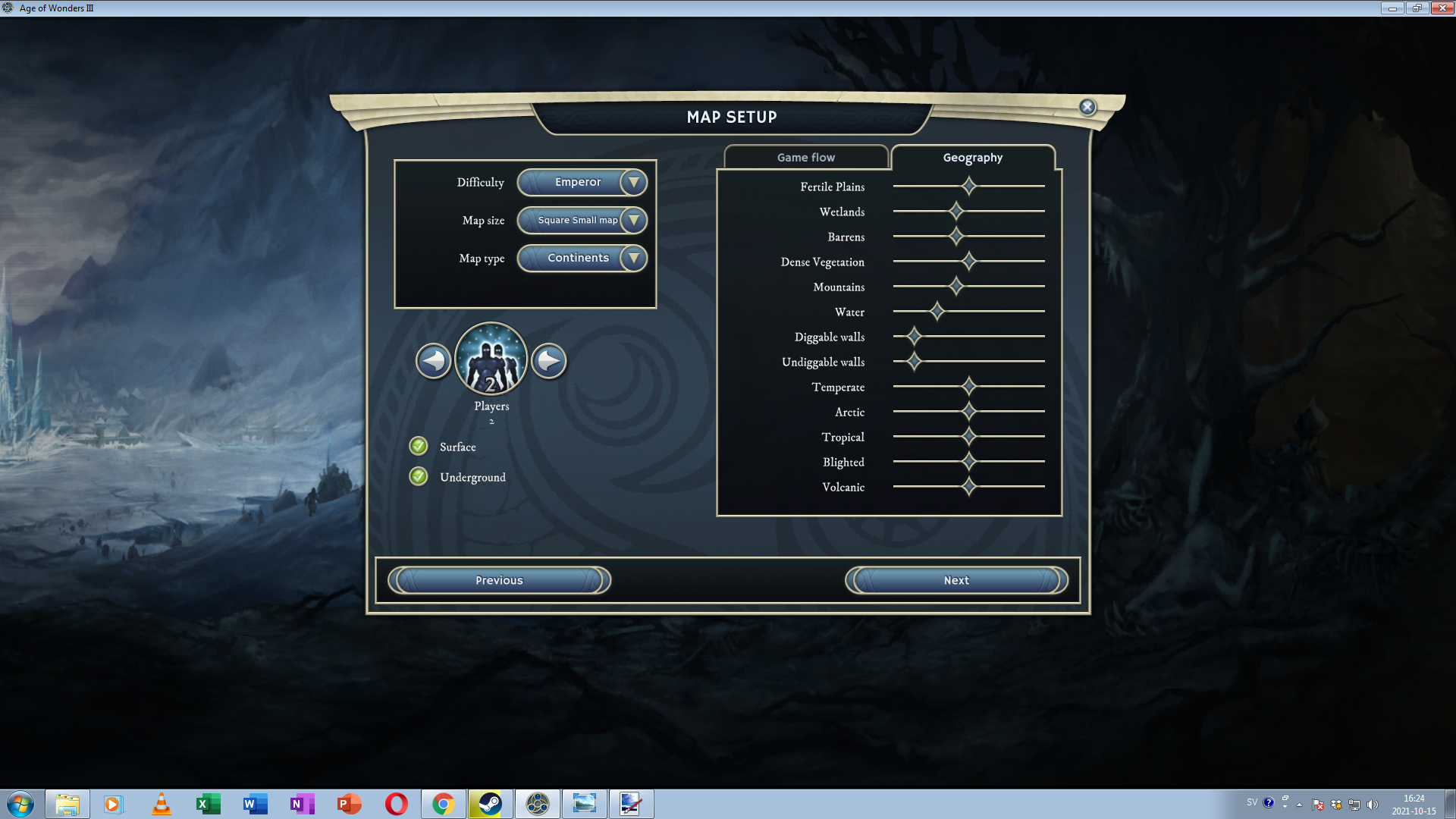 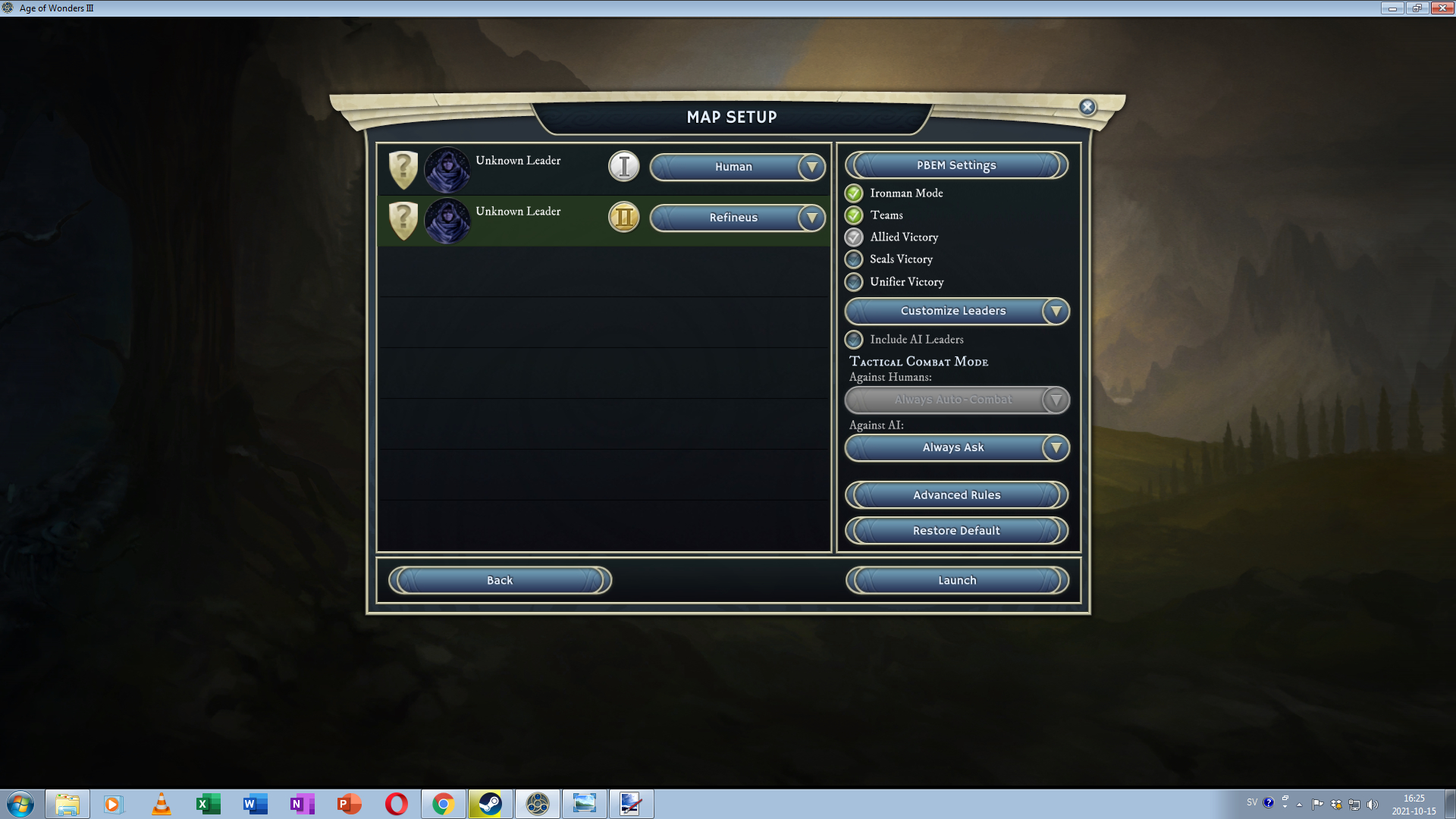 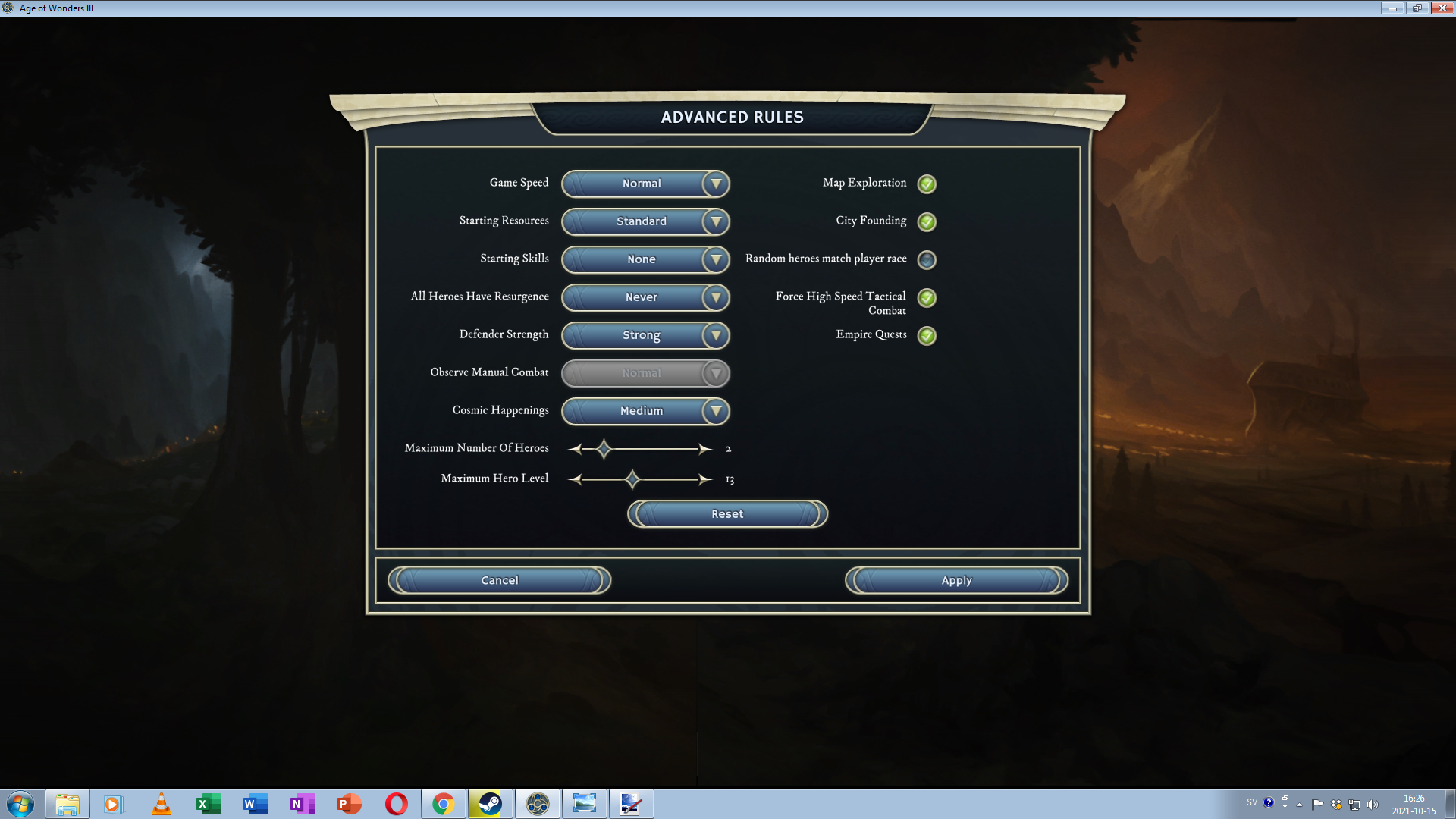 Hosting the match as I was first.


Print screen captures both screens and I edited out my 2nd computer screen
Here are some screenshots: 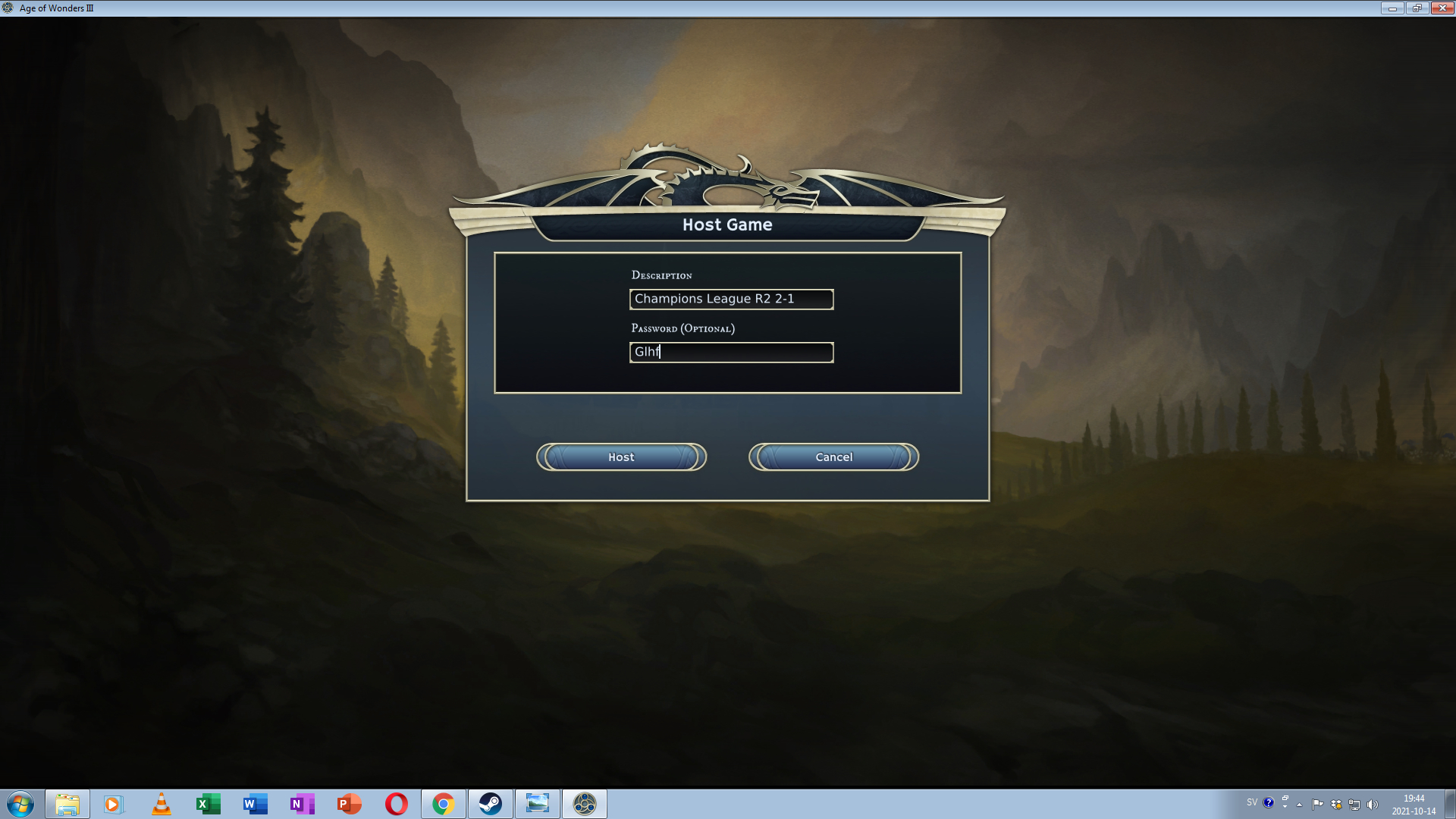 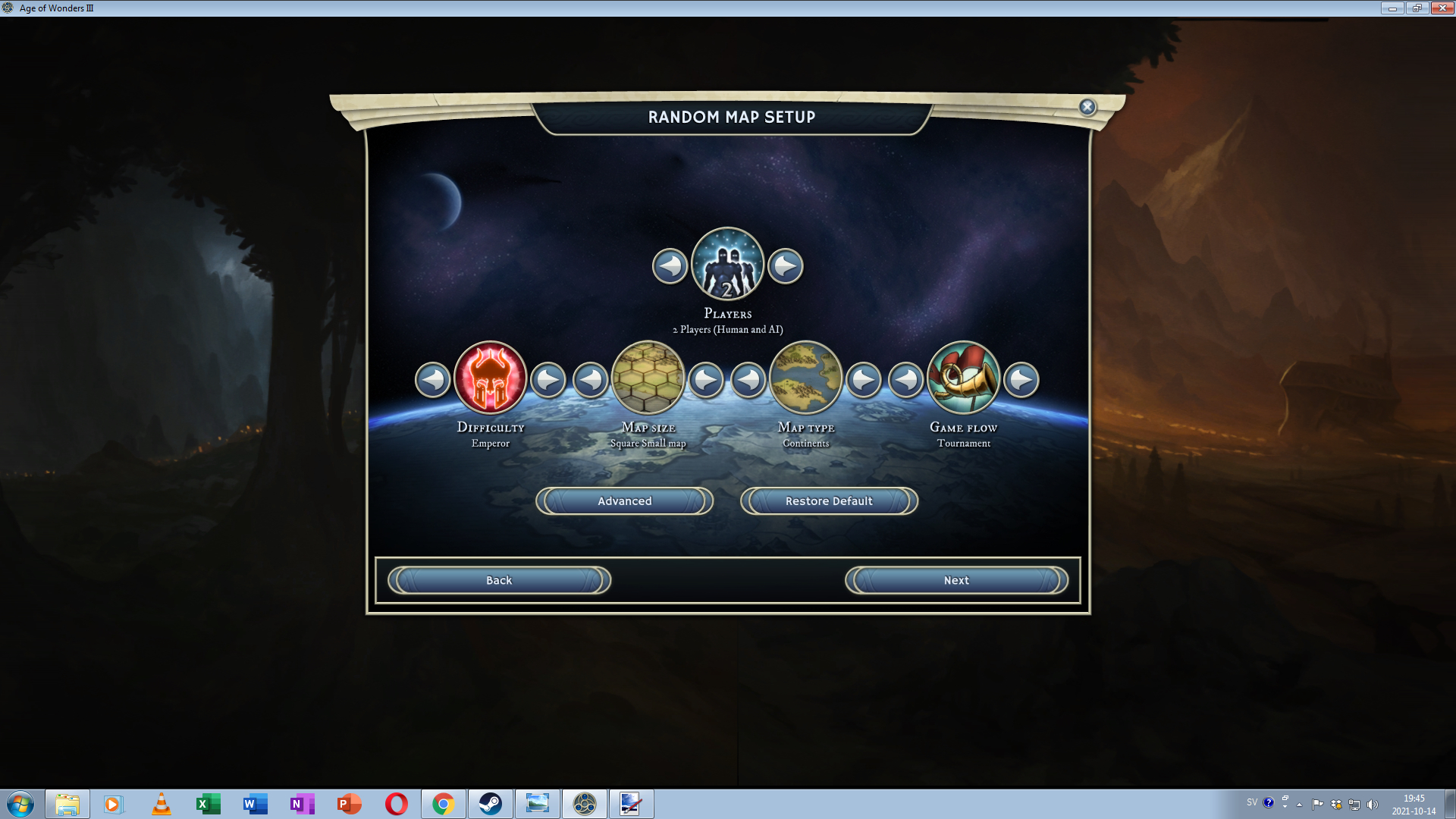 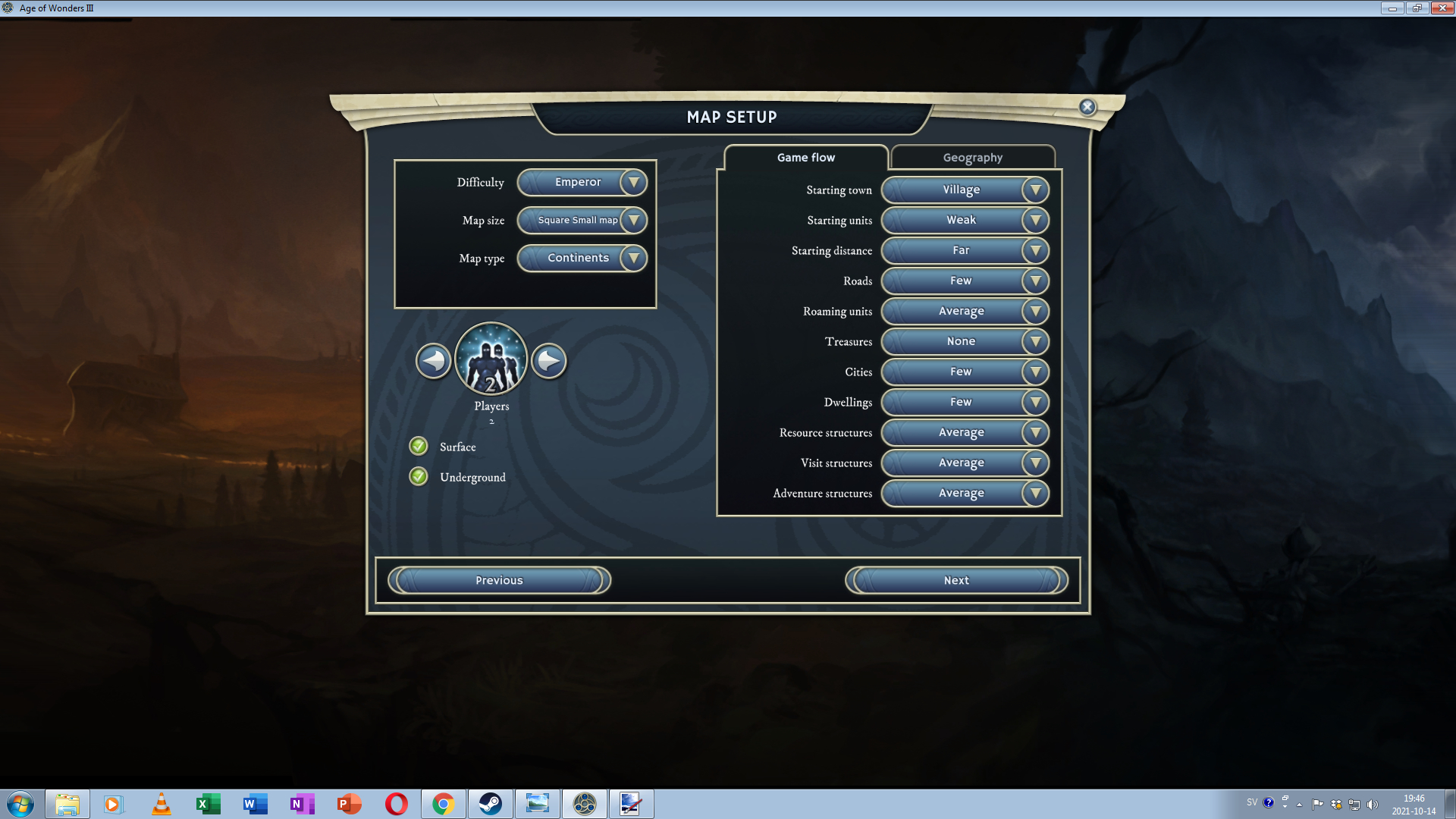 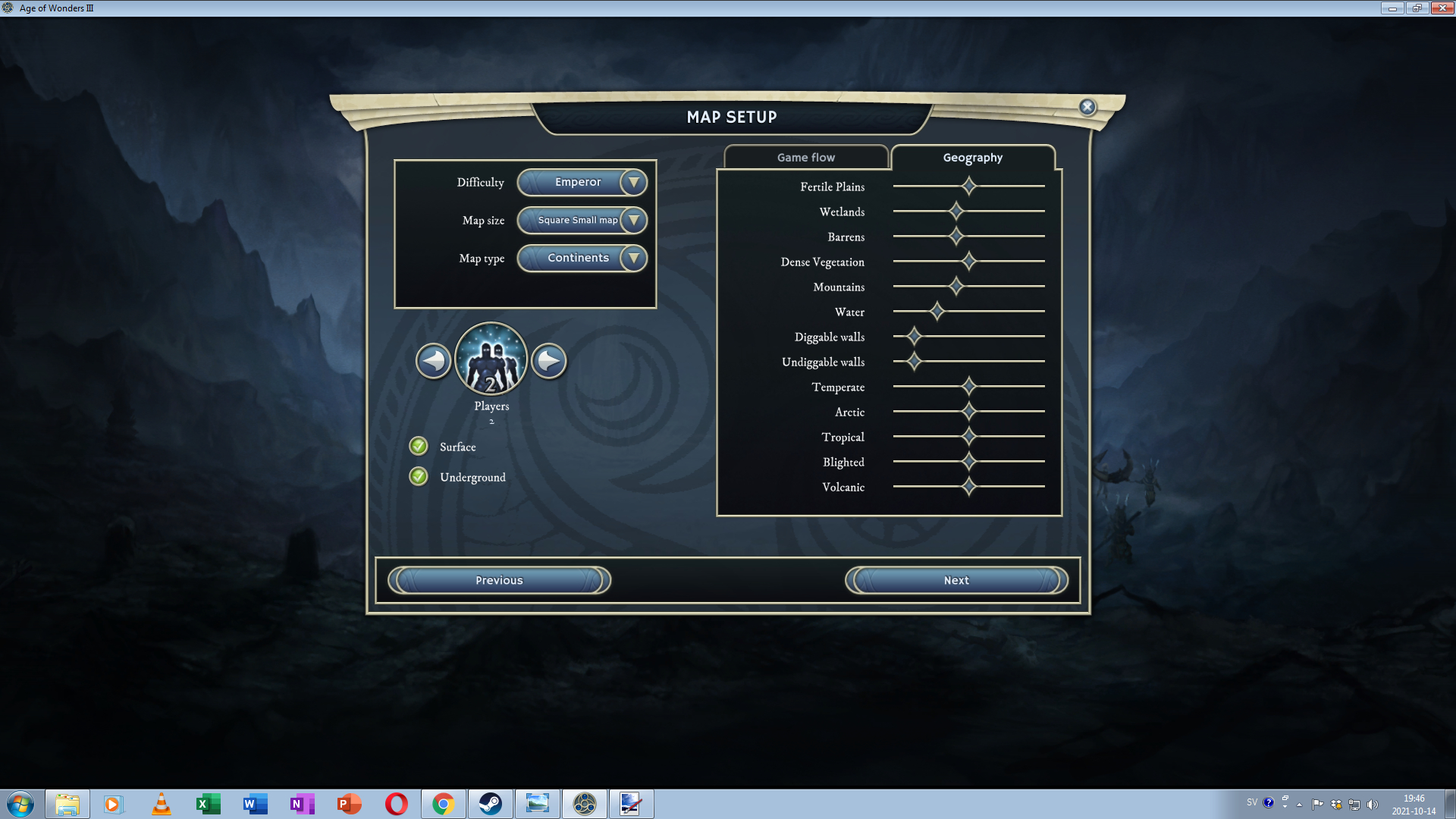 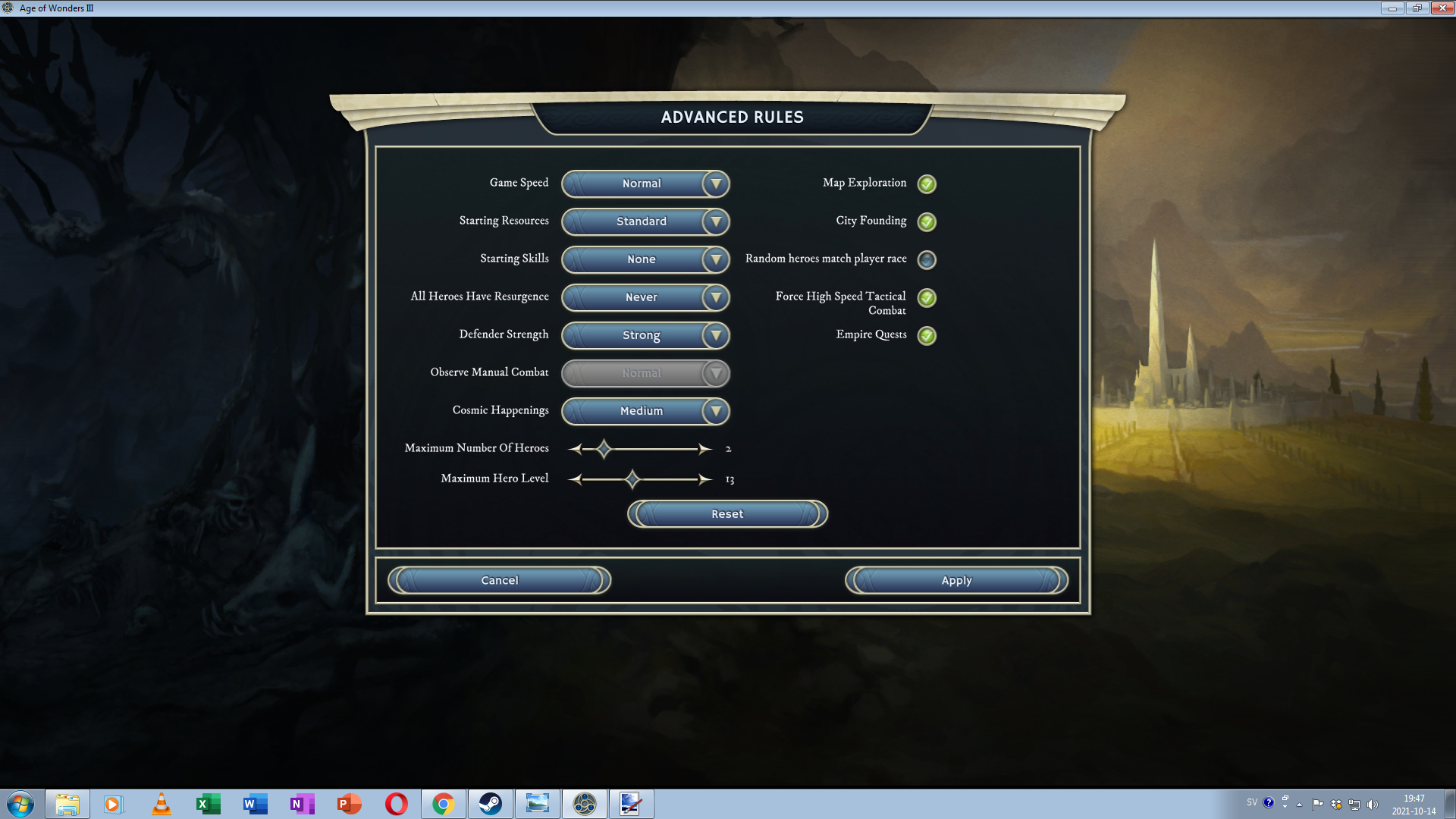 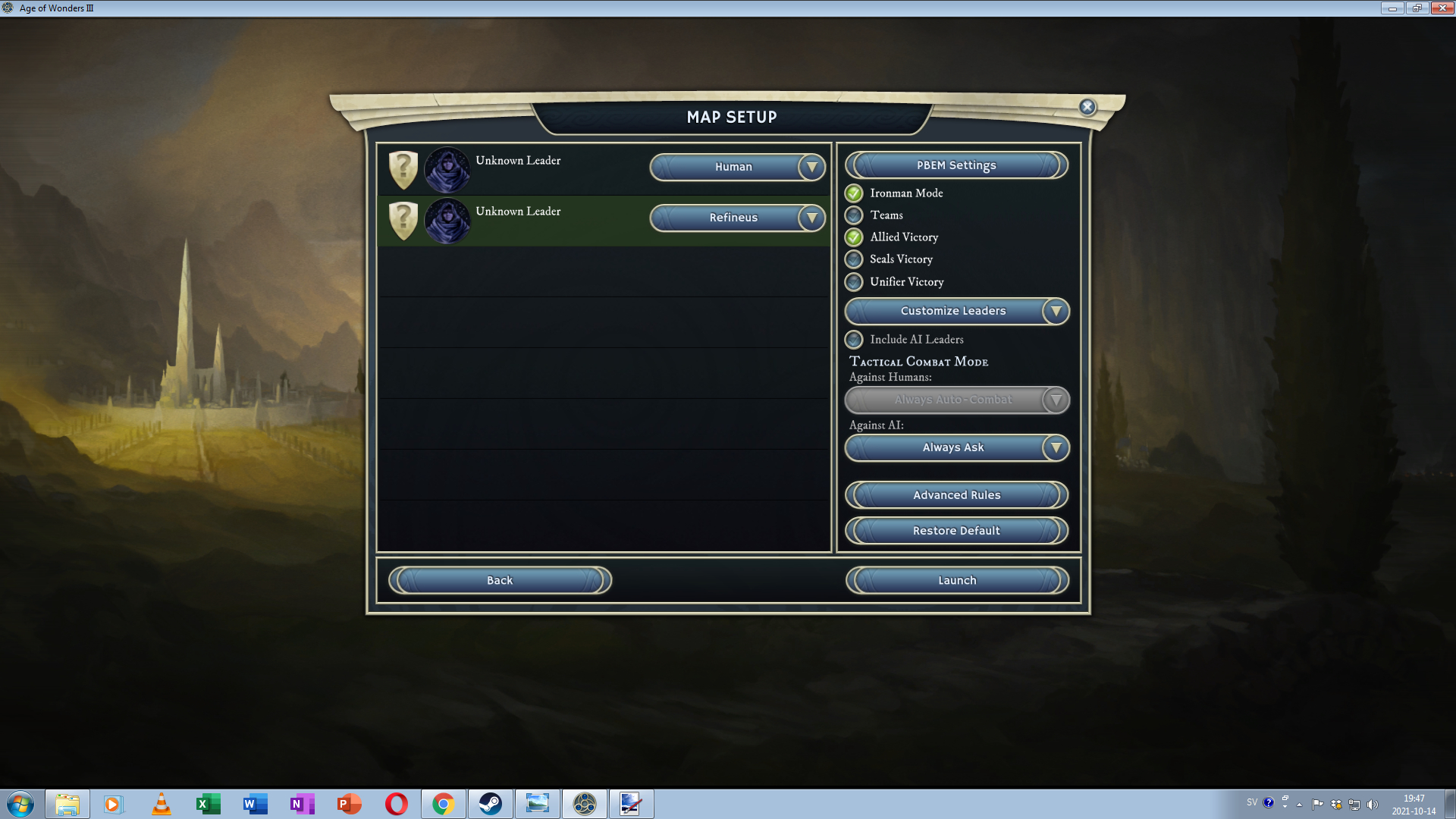