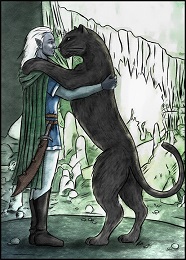 In one turn I could destroy 2 Orlyzzz settlers with help my scouting raven! One of them is already build a city, the other was preparing for this. 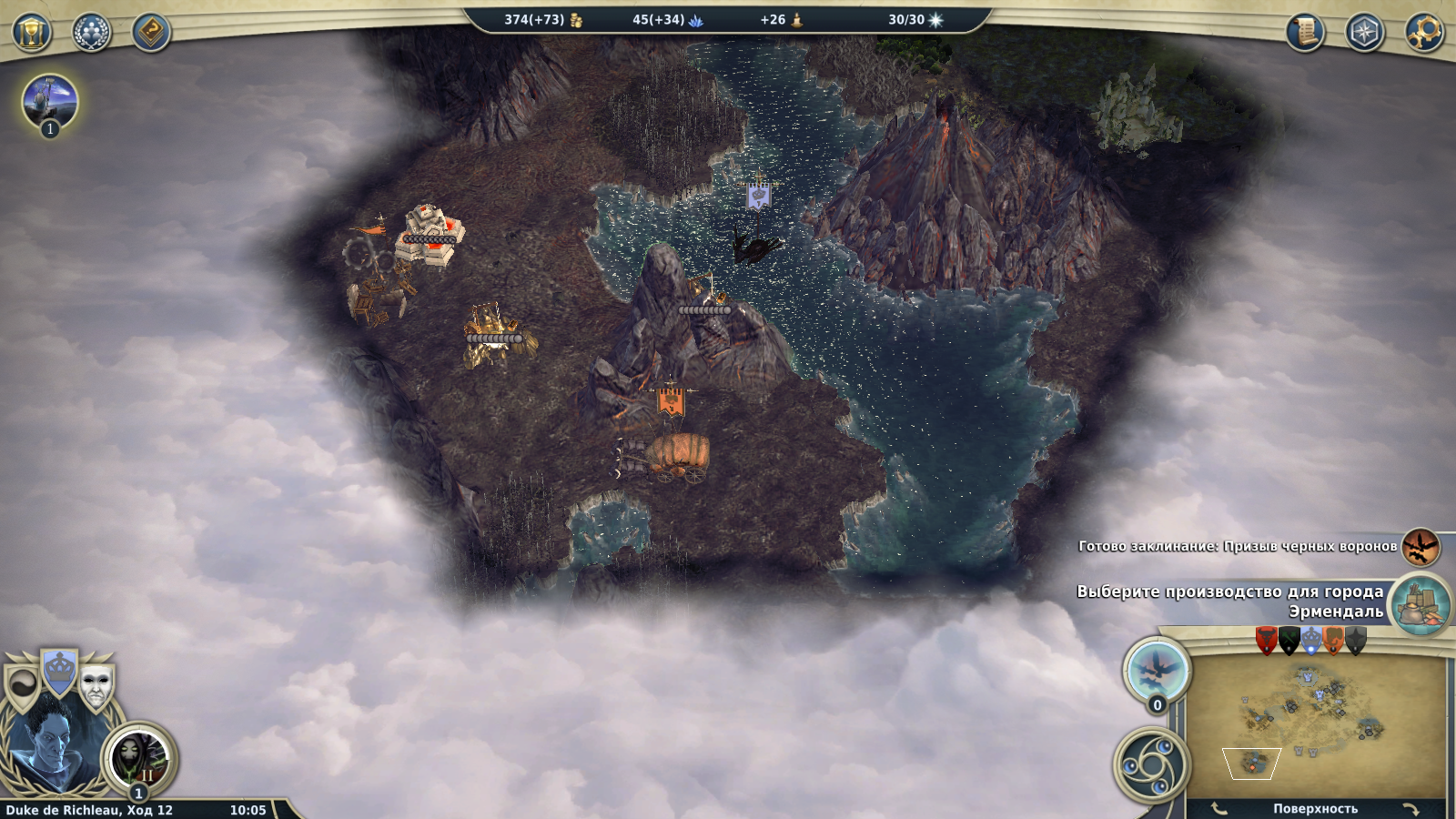 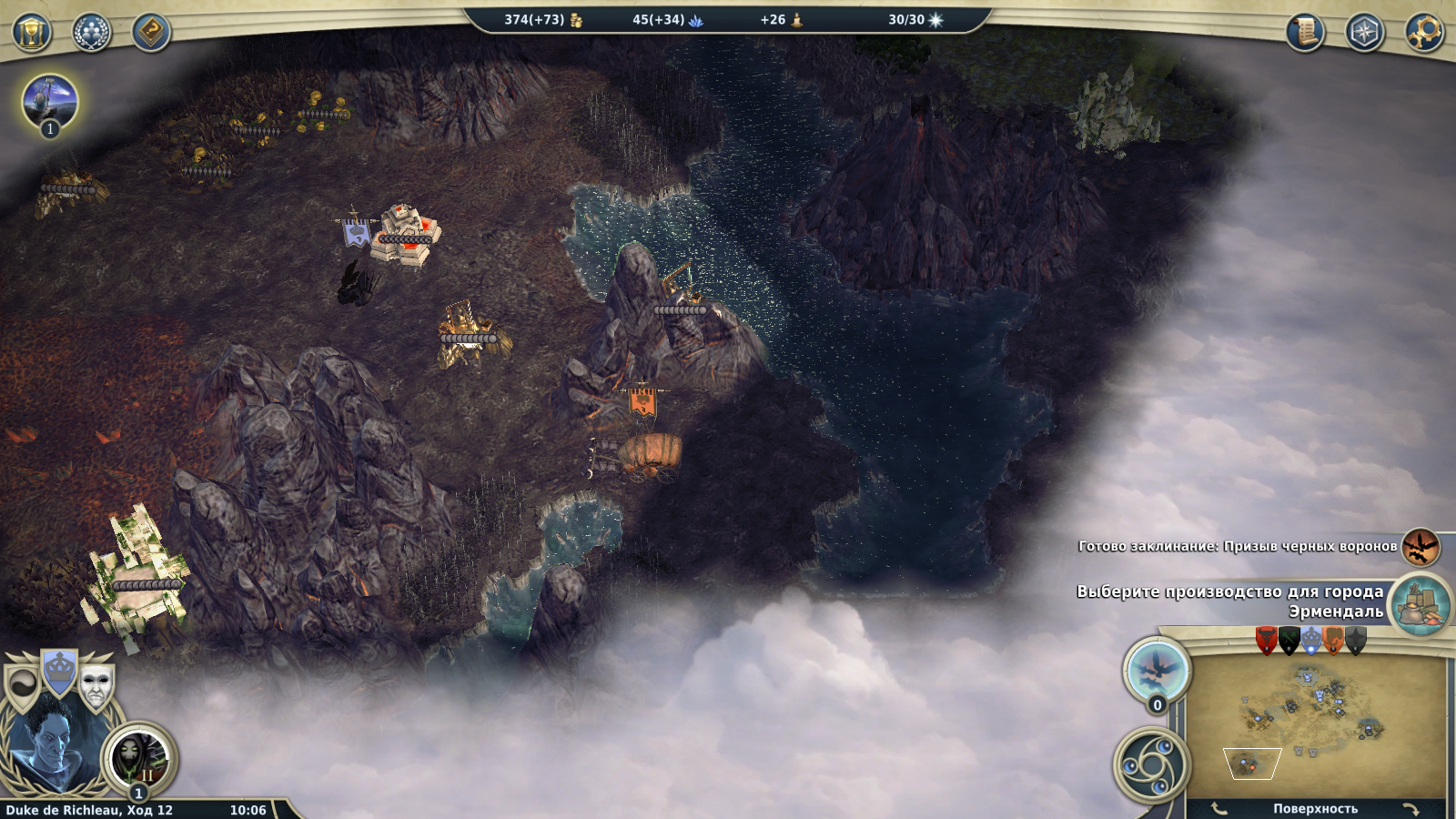 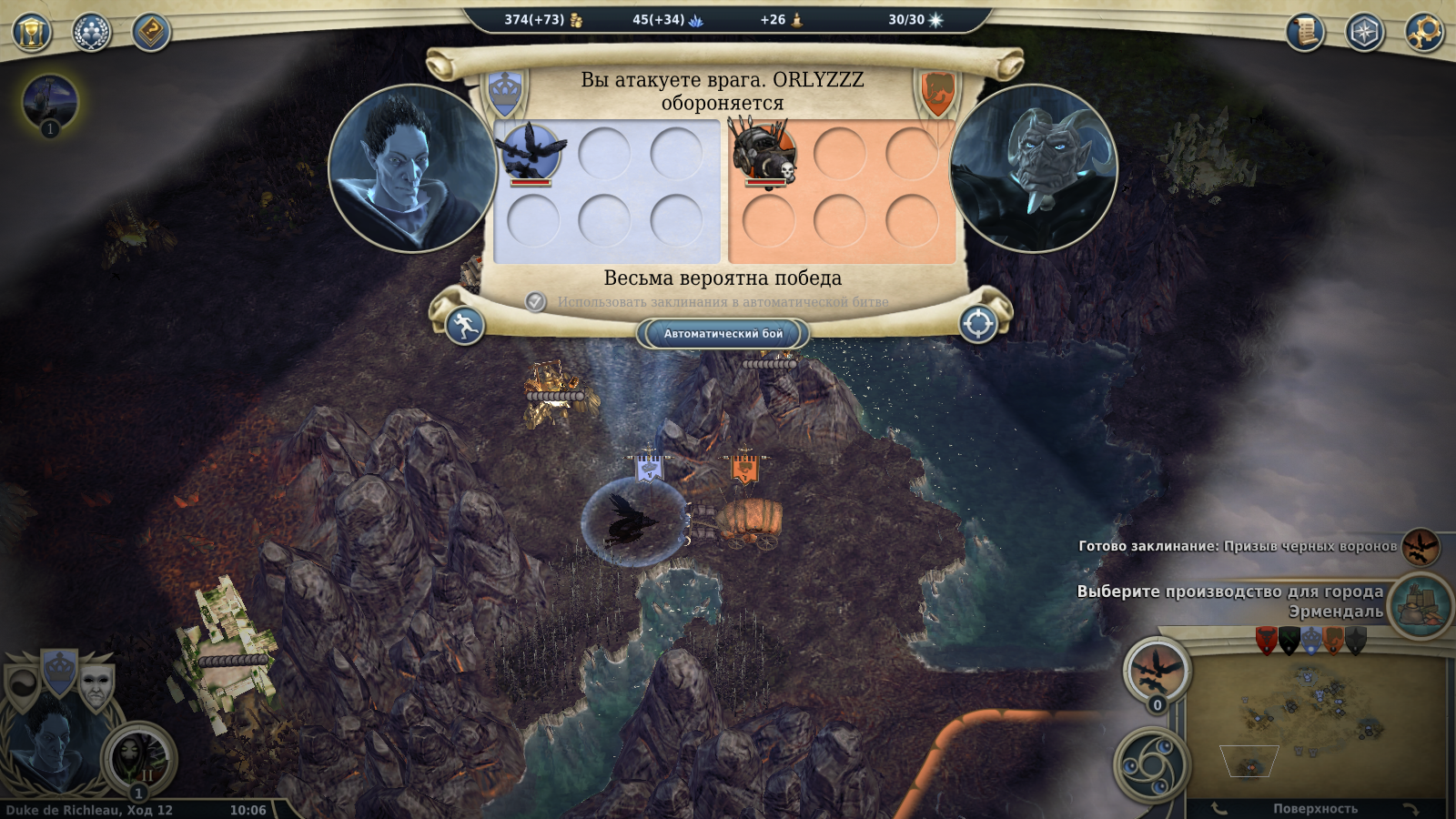 Marcus, thank you very nice video, may be someday I will play necro too

About this game - I knew that Dread can expand very quickly and after 25 turns he can be very strong. So I initially decided to use the already proven tactics to get 3 stacks (as quickly as possible) and defeat him before he will be able to defend.

Fortunately I quickly raise my leader to 7 level for charming. On the way to Dread`s throne I was able to charm 3 units and other 3 units Â I bought in the tavern. And I was so lucky to not lose any units in manual battles. When I arrive to DreadReapr I had 3 stacks and 1 stack of ravens, that was enough.
Published on Thu, 01 Jan 1970 01:00:00 +0100

Too bad the game was over before it really got started.
I was enjoying trying a new class and get some experience with Necromancer.

I think if you are 4 players on a medium map you are kind of forced towards the middle in starting position, me and Orlyzz was more to the sides.

I have some videos uploaded, but didn't expect match to finish so quick, so still have 8 last videos to upload.
https://www.youtube.com/playl...

Well played DreadReapr, well played. But your ally Orlyzzz haven`t give up yet. I`ll wait when he confirm a report and after I post my opinion about this game. May be with some screenshotsÂ

Match has been reported from DreadReapr!
Back to the game page

we planned that orlyzz send gold early game after his first half-price settler so i can expand fast with humans and get the 3 knights quest asap, we shudnt have done this bcz me and evgendil were close to each other (unlike standard left vs right spots). so turn 16 i had 8 cities in total and waiting to buy vassal so i can get my brave knights.Â
unfortunately for me evgendil was there in time with his 3 stacks and he took my front city, i didnt have enough forces to defend bcz i spent all my gold on fast settlers so i really needed those knights to have a decent chance to kill his stacks. turn 17 i bought the vassal and took back my 2 captured cities and it was 8 in total, i expected to complete empire quest and have my knights at the same turn (i tried this before and i had my quest completed the moment i buy vassal at the same turn) but for some reason it didntÂ 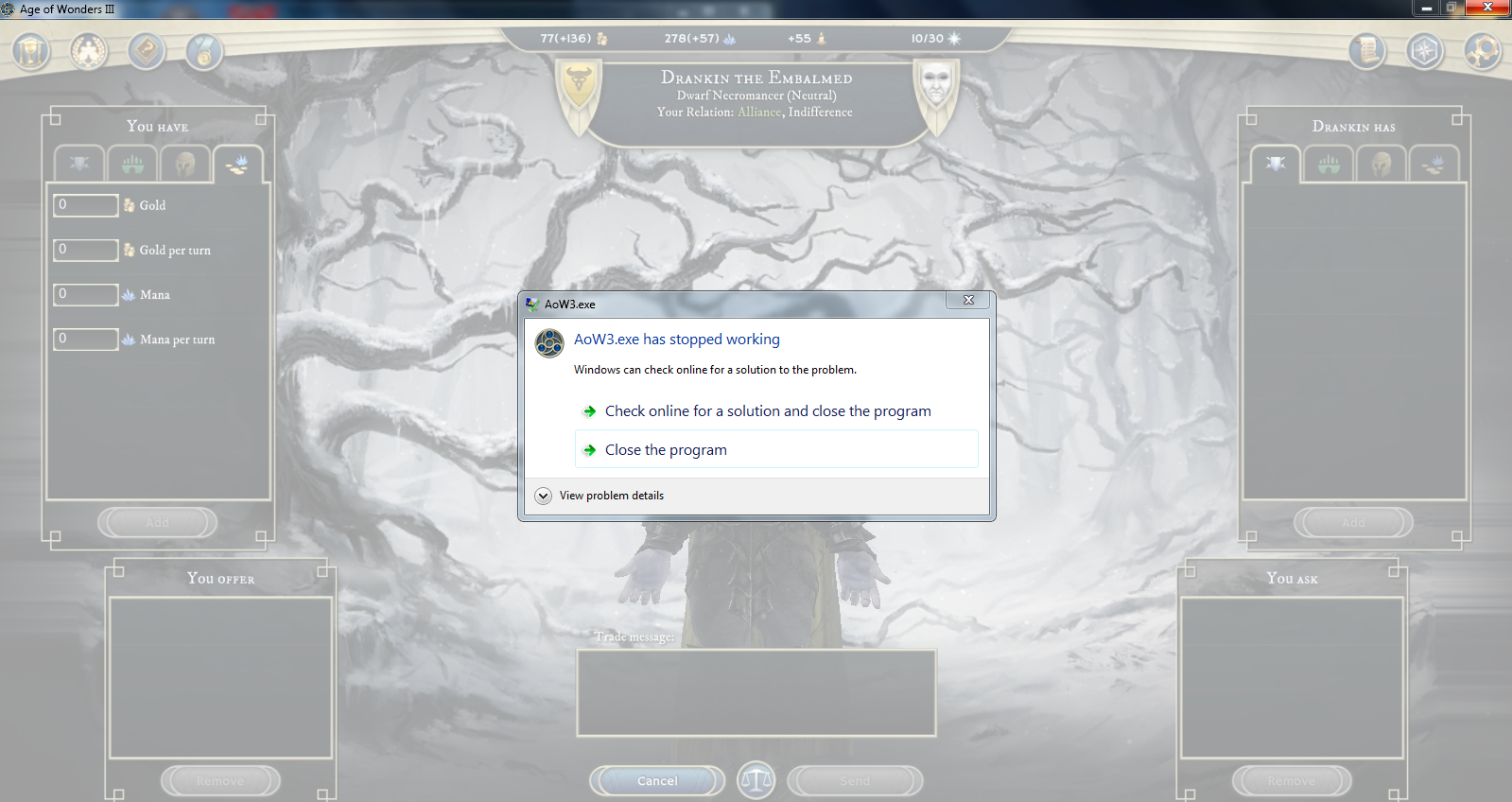 also i missclicked when i sent my hero to check for a hidden stack. 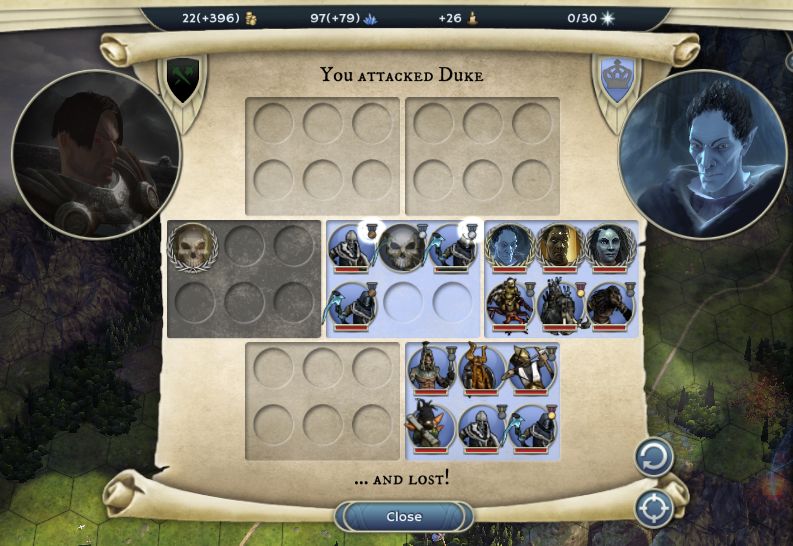 but it doesnt matter anyway, as u can see below i dnt have enough troops to hold my sim cityÂ 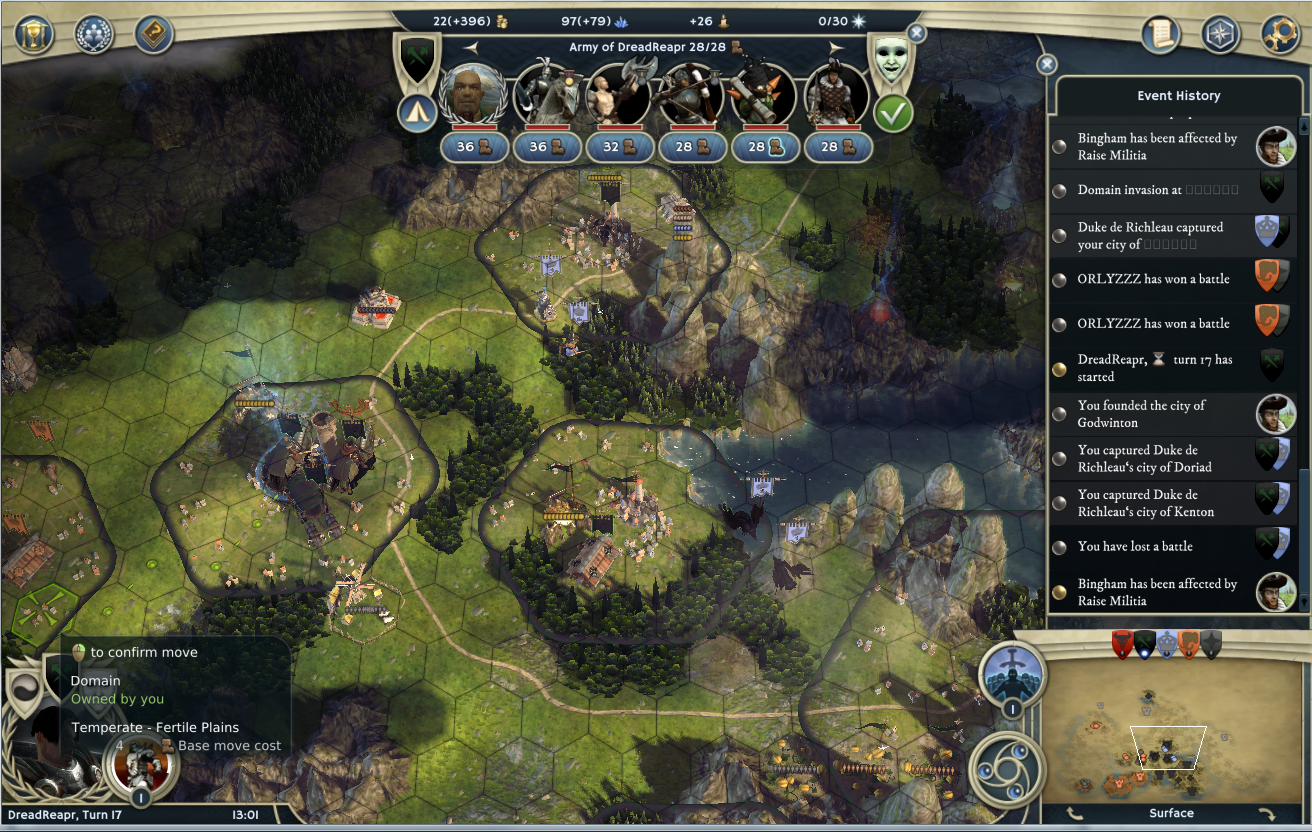 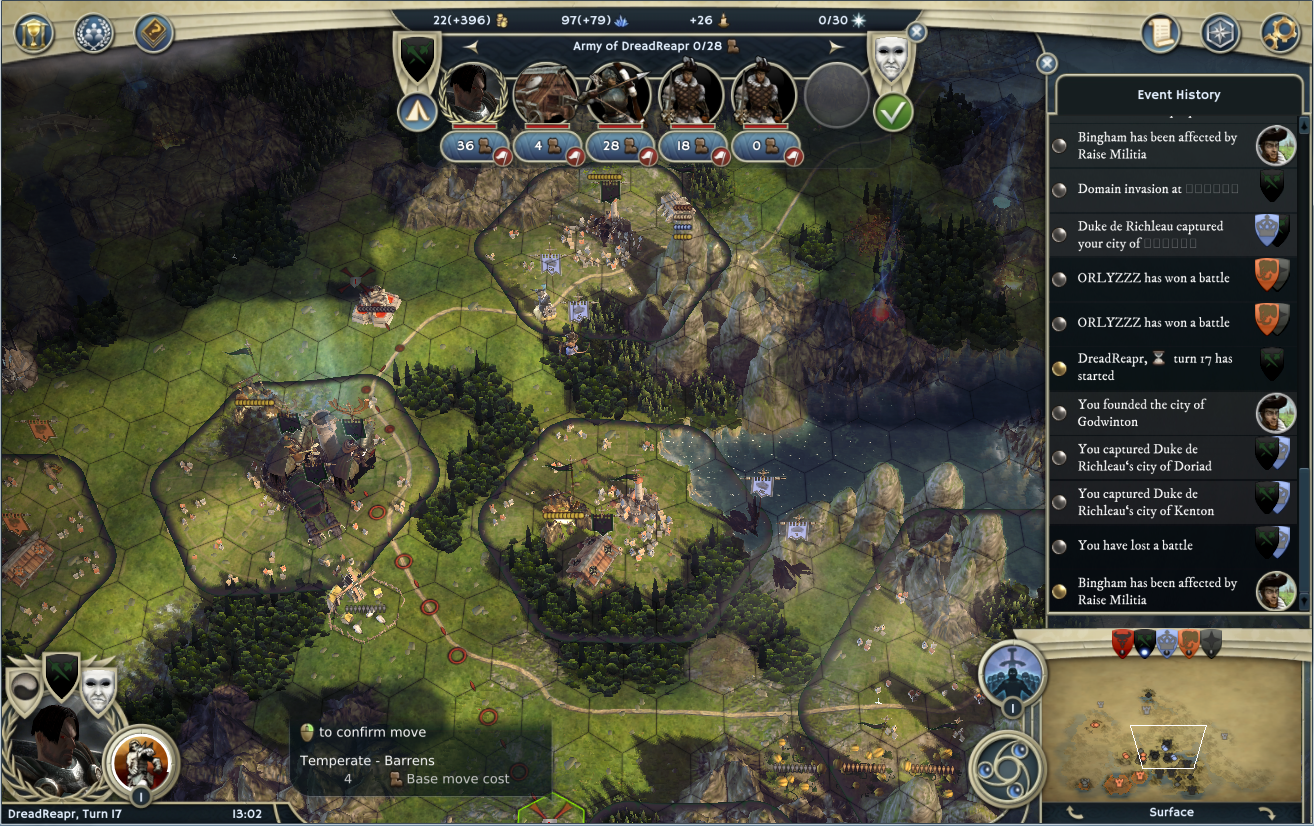 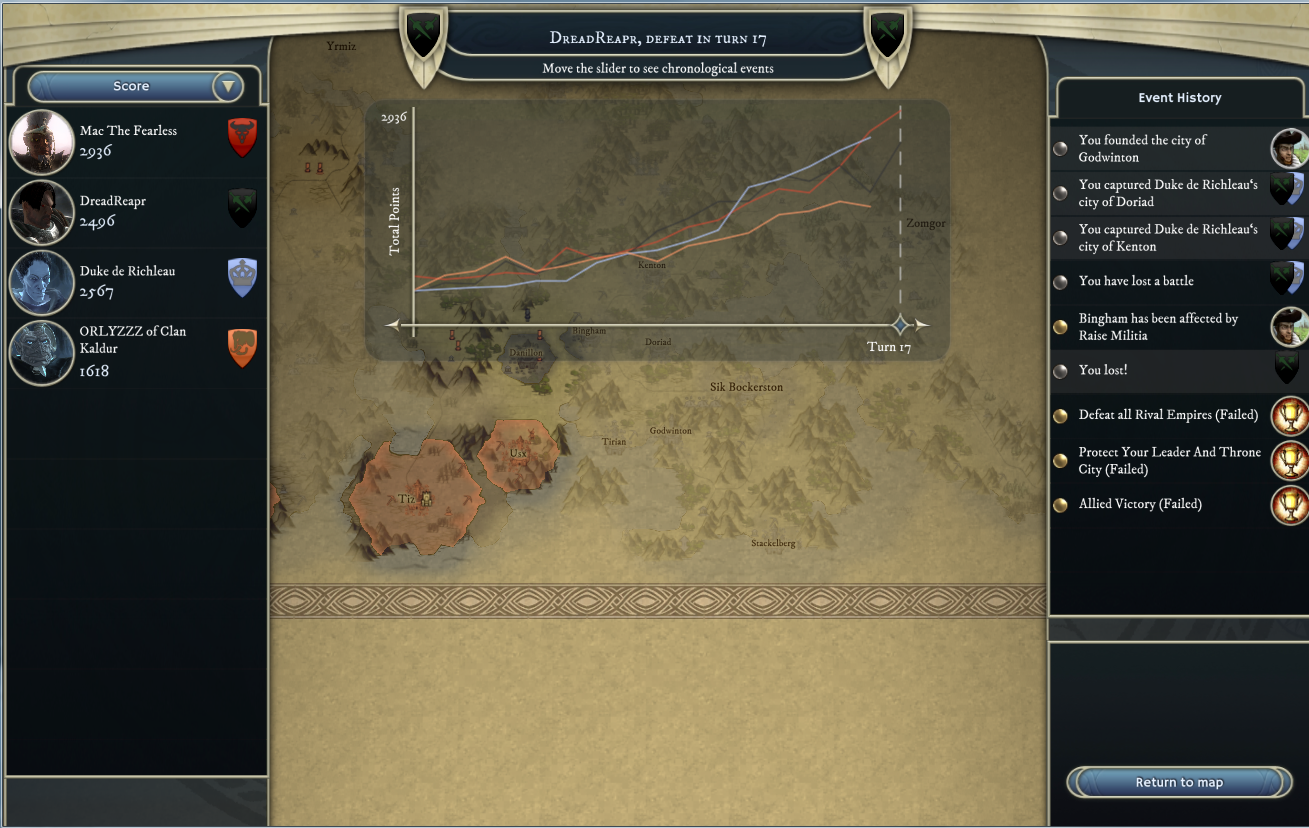 Yes, I don't know what happen in our game, but every time I try start the recording, the game break down. I had another restart, I have updated the drives on my computer now, hopefully it will solve it, if it was video card problem.

Nothing wrong Orlyzzz, continue to play. Restarts happen sometimes, as said Marcus, nice if you report it. It`s a friendly game, in tournament judges will require even and screenshots

Yes, a lot of bugs lately!
I see in other games there is also more restarted then before, I don't care much about it anymore. Just nice if we tell when it happens, I guess.

I don't know if it could also be the switch between mods? I have 3 different mods in 3 different games.

I had a restart too, first turn i never played any turn so when the game was ready to play, i got that message with iron mod and restart.I restarted and made my first turn.

I am new to this pbem system so i don t know exactly when to report or what write here, i am learning now.So if i do smth wrong i do it by mistake.

Yes, orlyzzz also had a restart. And he didn`t bother to explain why.

I saved and exit game as my video recording didn't work, once I restarted computer I got a "game restarted" notification. Just wanted to let you know this was the reason, and it shouldn't happen, but it seems others more than me have had similar issues.

it wudnt be practice if its normal units and land, can we stick to tourney settings?

Ok game is hosted.
2 changes to the tournament settings, starting units normal (not weak) and land (not continents).
Let me know if you don't agree and I rehost.

Tournament Practice game, with secondary/third choice line up.
Meaning, no Druid game from me and Evgendil