v1.29 is the last of the v1.2x update: the final release before v1.3x versions and their overhaul of non-summon strategic spells, Racial Governance and at some point, balancing of the Shadow Realm Community Expansion. The scope of this update is limited: completing the hero/Leader skill cost rebalancing, and mostly bug fixing. As usual, it also improves description of skills, abilities, etc. to improve player experience. 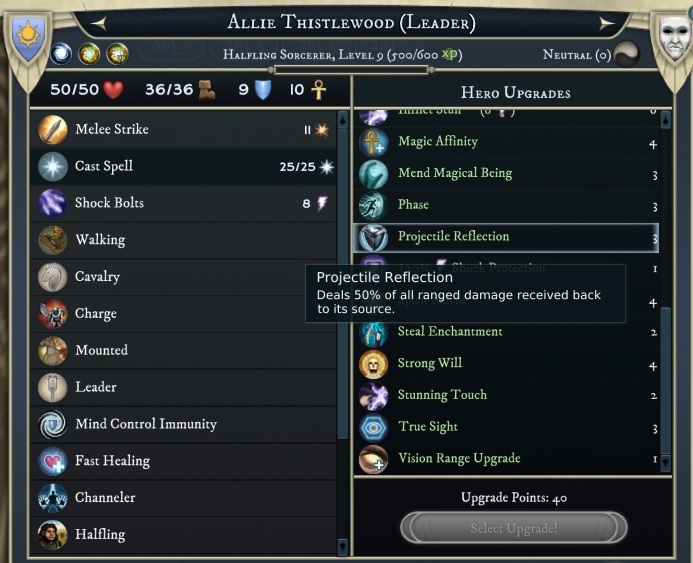 A dozen abilities had their costs tweaked to better reflect their strengths: Phase and Projectile Reflection are now cheaper, while Free Movement (Arch Druid ability) is now more expensive for instance

v1.29 was released on the main branch close to 8.5 months after v1.28 (against a goal of a release every 3.5 months). This is despite the fact that its first release on the beta branch came only 2 months after the release of v1.28 on the main branch. This significant delay is partly due to some tedious bug fixing and obstacles to implement some of the planned changes (see next paragraph). It also reflects the considerable time spent preparing v1.3.


Unfortunately, some technical issues prevented the implementation of the major overhaul of the movement of non-Walking units announced in the article on v1.28. This is delayed to v1.3. With a change of decimal, v1.3 will be a major update of the balance mod, and probably its last such major update. Unlike what was announced in that same article, it will only boost non-summon strategic spells. The rework of Racial Governance is pushed to v1.31 or further versions to avoid further delaying the pace of new balance mod releases.


The coding of v1.3 should start in early June, with hopefully a release on the beta branch shortly after. The pace should accelerate after that, with much smaller updates to be expected (except for the Racial Governance overhaul).


General
- Forbidden Sanctum’s extra reward multiplier is 0.07 (was 0.25) so that you can get maximum 200-300 mana in addition to CP and free skill (this is also updated in the Strong Defenders Normal Rewards mod)
- Armor Piercing costs 1 upgrade point (UP) (was 2)
Inflict Immolation costs 3 UP (was 4)
Inflict Severely Poisoned costs 4 UP (was 5)
Phase costs 3 UP (was 4)
Projectile Reflection costs 3 UP (was 5)
Rapid Reload costs 2 UP (was 3)
Guardian Flame costs 4 UP (was 5)
Martial Art costs 3 UP (was 2)
Tireless costs 7 UP (was 6)
One with the Tree costs 5 UP (was 6)
Life Steal costs 3 UP (was 2)
Energy Drain costs 5 UP (was 4)
Free Movement costs 3 upgrade points (UP) (was 2)
Immolating Touch costs no action point (was takes all remaining AP)
- 9 descriptions and Tome of Wonders pages are updated to correct imprecise or incorrect descriptions. Full list. 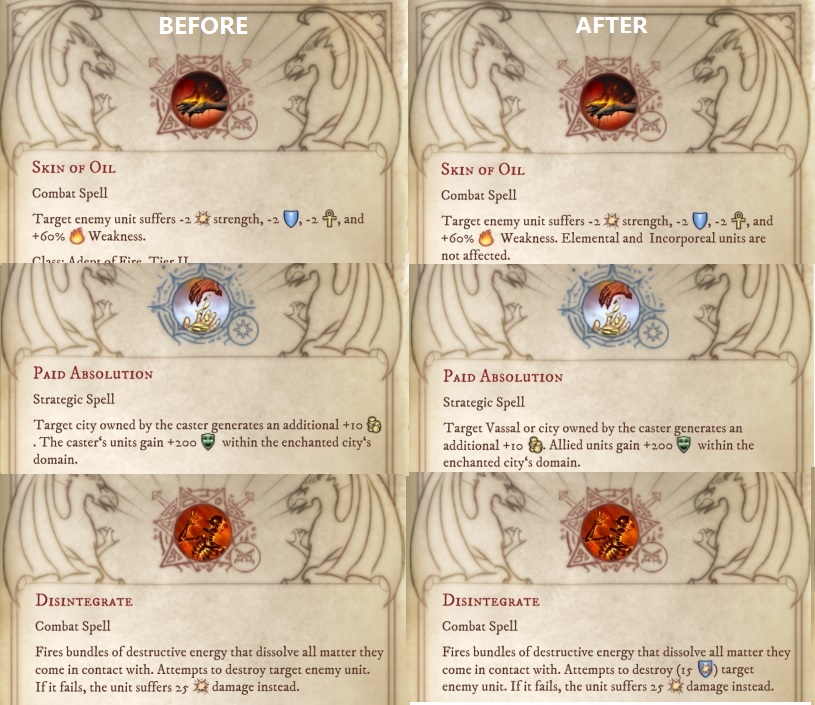 Example of before and after description updates: the strength of Disintegrate is now stated and the exclusion of Elementals and Dragons from several abilities is now visible. Thanks to gladis and Rodmar for reporting most of those!


- The update of the entire French localization of the game is completed. Thanks Rodmar!

Necromancer
- Inflict Despair is available at level 7 (was 5)