I started OK but then tried a Magma Forge with a Fire Elemental alone as a defender... I could not go melee with it because of its Explosive Death and I had a good chance of finishing it with range when I made a misclick and put my hero in contact with him instead of attacking with range to kill it... I then panicked a bit and sent my Mammoth to finish the Elemental, afraid that it would move to kill my Leader. Result = I lost my hero and my Mammoth, my 2 strongest units with my Leader (which would have come back from the void). After that, I played cautiously and focused on the research of Produce Bards.

I spotted a very strong Dungeon with a chance to Charm a Warbreed... So I tried to Charm it, while playing cautiously, with the possibility to retreat. 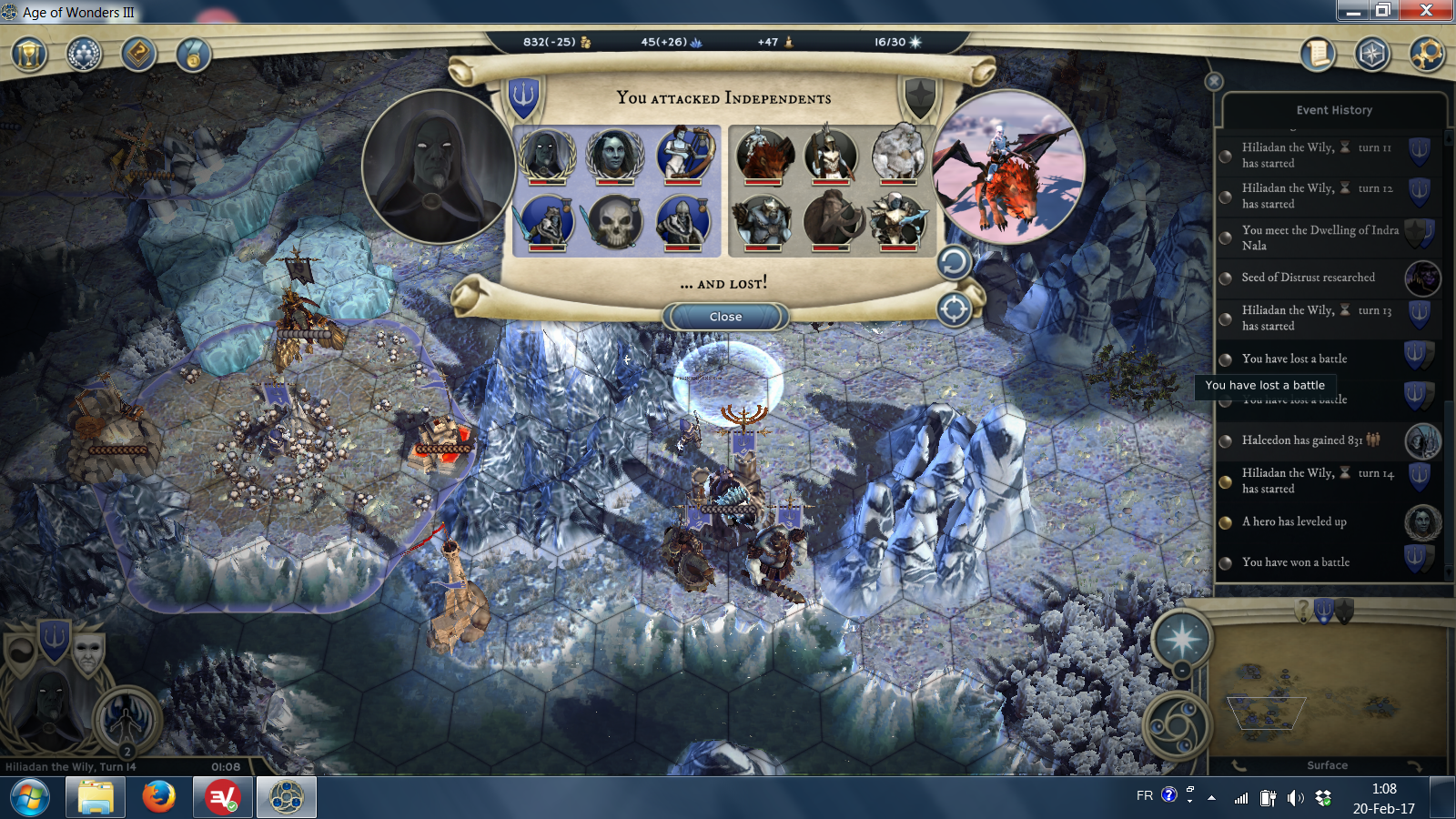 As you can see, I didn't succeed the 2 Charms from my Leader and Bard. I sacrificed one unit, a Harpoon Thrower, to be able to retry again immediately (by moving another unit from nearby to re-attack the Dungeon).
2nd try was also a failure (with only a Charm from a Bard, I retreated cautiously without trying a 2nd Charm from Leader).

Then I brought one more Bard on the following turn and tried again.
This time I was lucky and all my 3 Charms from the 2 Bards + Leader worked! So I got a Warbreed, a Yeti and a Mammoth. 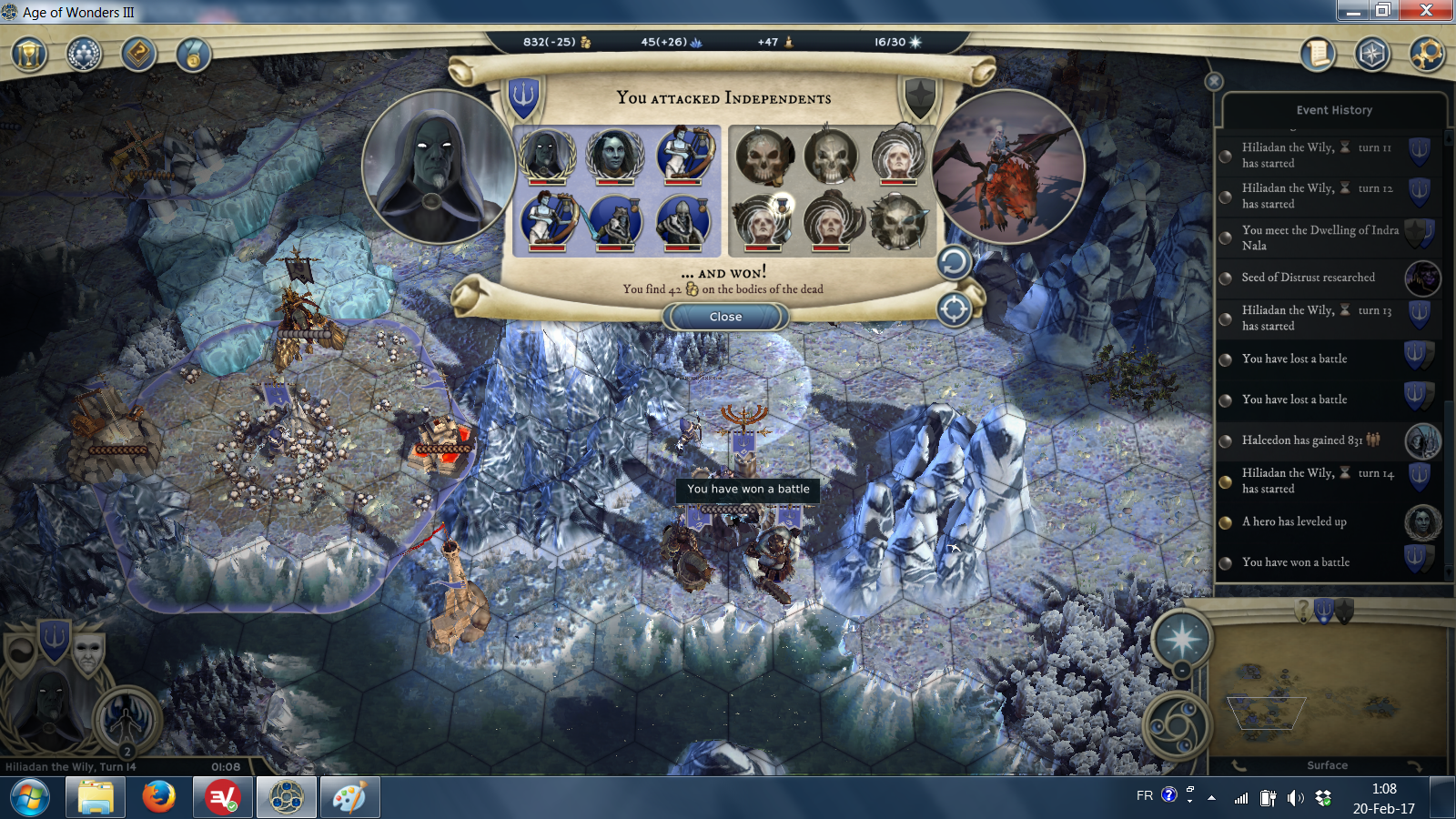 With this strong units (+ 2 T3 as rewards from the Dungeon), I decided to go for Melciar and split my army into two groups, 1 led by my leader and 1 led by my Theo hero. The 2nd group went to clear a Pirate's Nest (to avoid having the Nest spamming flying roamers who would take my cities) and my leader went straight east to face Melciar.
I met Melciar on turn 15 (I think) when I encountered the Orc City (City size) that was his "nearest independent". The timing was perfect: he was moving to complete a Quest there and as the City was an island and the Quest was on a 2nd island, he was moving on water, so I cast Seed of Distrust (for the 1st time in all my AoW3 games!) and his Quest was cancelled and he lost many turns as getting in and out of water is not easy. 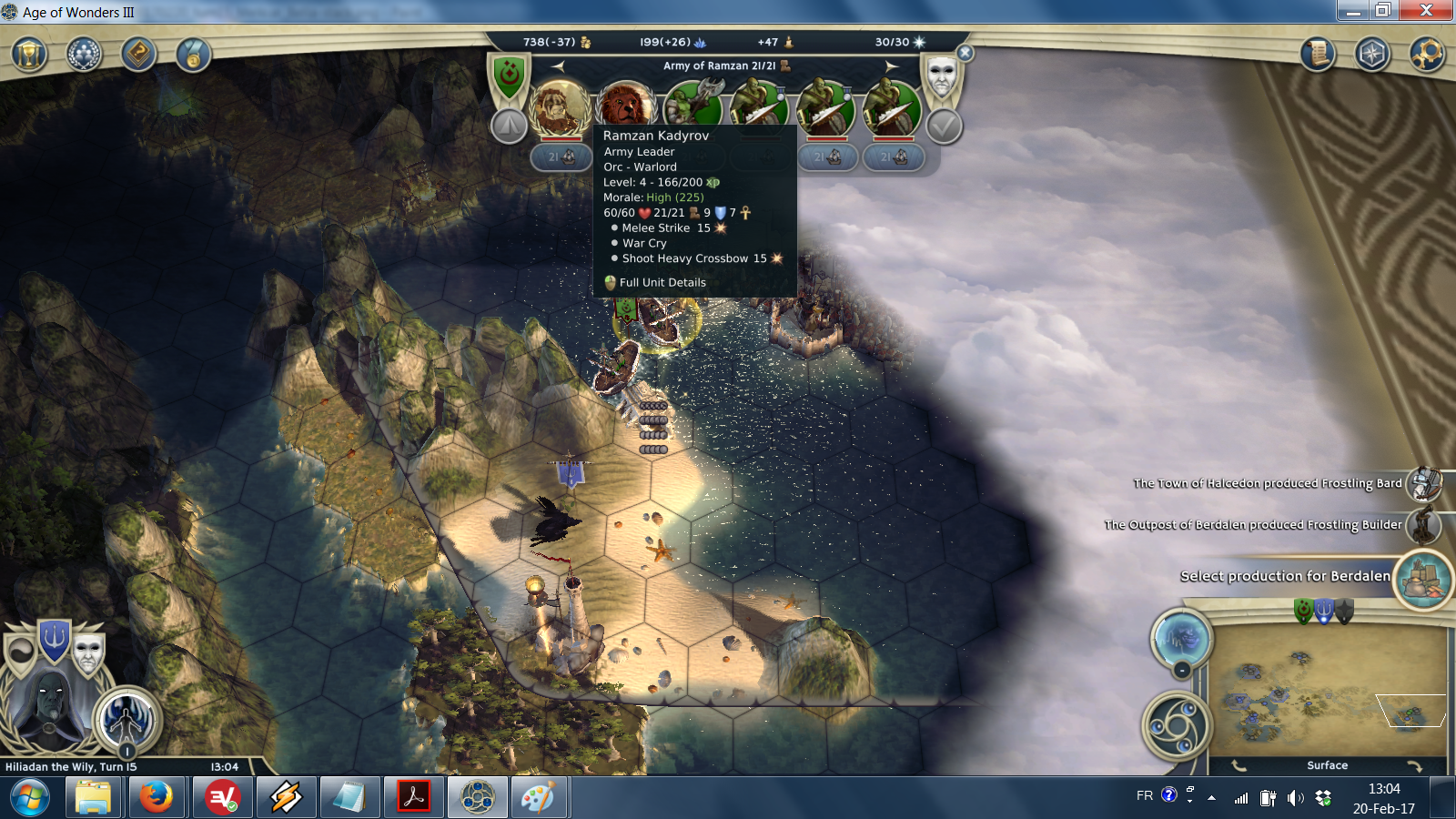 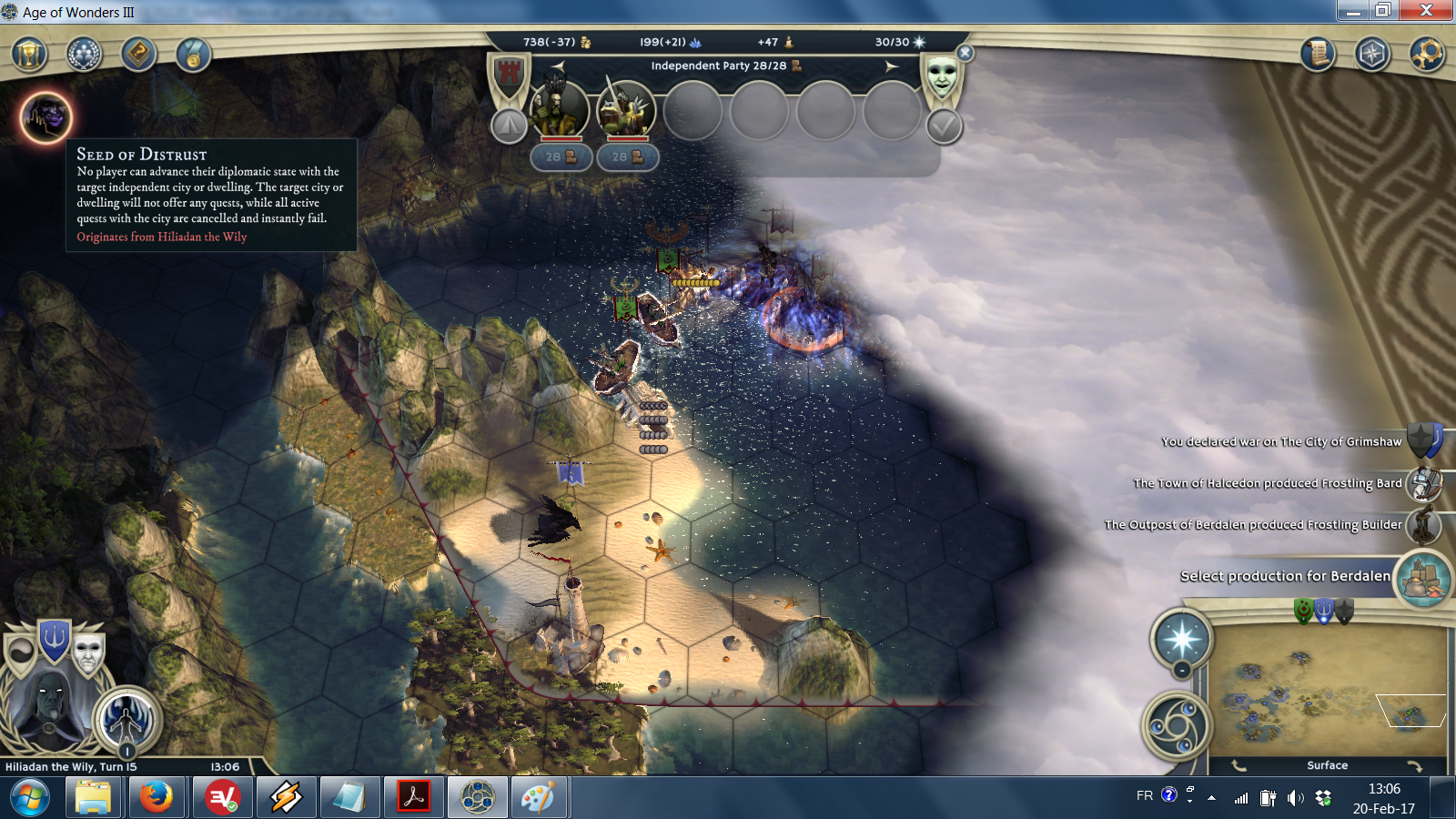 I played Shadowborn Adept, Water Adept and Destruction Adept and not the usual Explorer favoured by Rogue. Indeed, my plans were to go for a Racial Governance and Charm strategy so focus on Bards, Harpoon Thrower and Royal Guards, none of which are Irregulars. I chose Shadowborn for Embrace Darkness and the cost discount, Seed of Distrust proved very valuable too. Water was for Rot against Undeads but also for Vengeful Frost and Freeze Water. Destruction obviously for Hasty Plunder and Scorched Earth.

That pushed Melciar to commit a big mistake and attack the Orc City to try to give some sense to all the turns he had wasted getting there in the first place. His army was weak so he lost several units including his Leader.
I then moved even faster toward his throne and sent Crows to check if I could take it immediately but I couldn't (defended by 1 Irregular and I was not able to get 2 Crows to attack it simultaneously in time). Instead, I killed a Settler guarded by another Irregular. Then Melciar tried to kill my 2 Crows with 2 Scouts but got defeated by the Crows supported by 2 Vengeful Frosts. 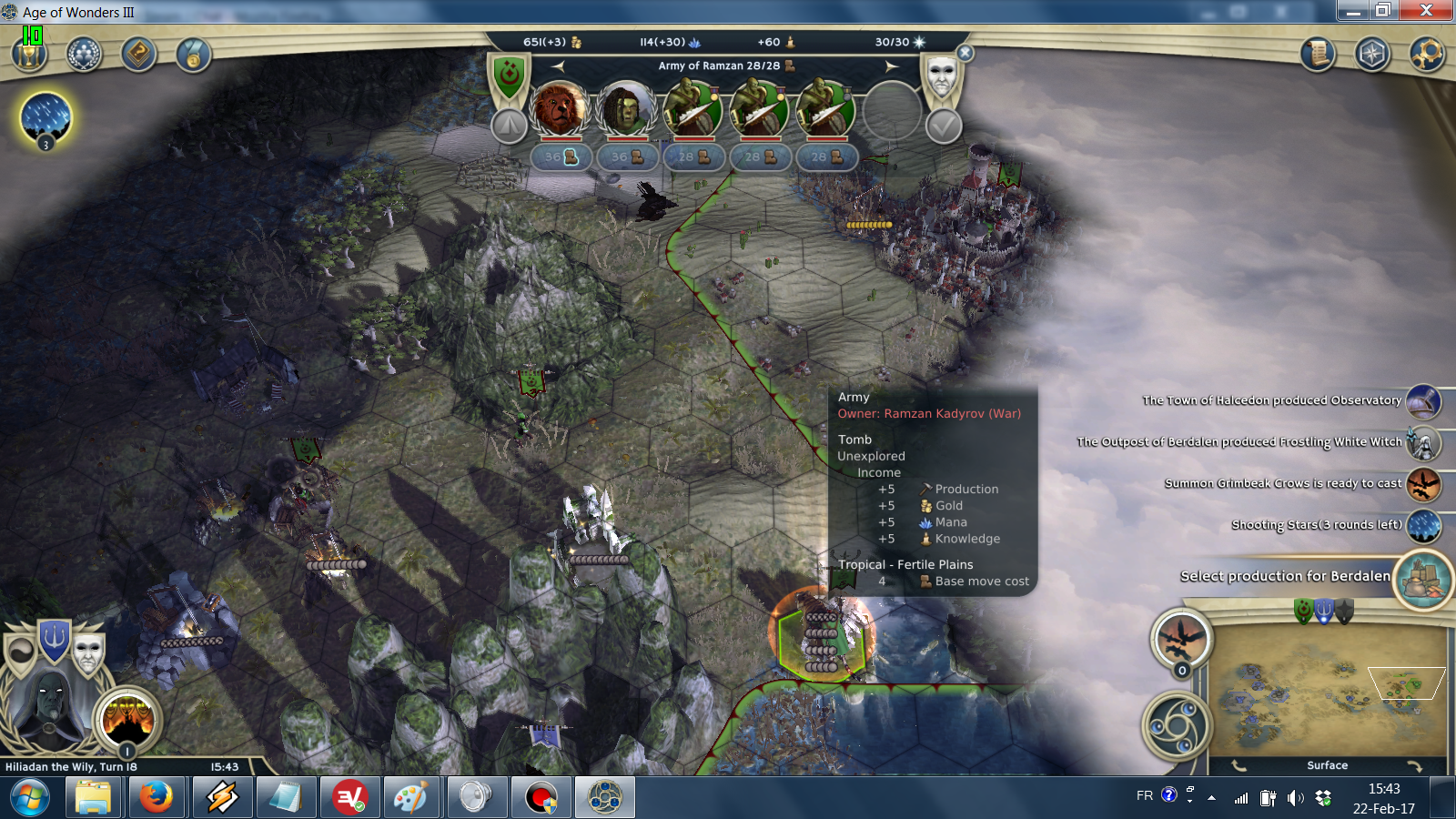 Melciar's Leader thus came back but I was at the door of his throne. I sent a Draconian Flyer and Halfling Eagle Rider toward his Outpost to take it, he saw them and surrendered.

Quick game! Now such Charming at Dungeon won't be that easy any more thanks to the new battle enchantments, that's good. 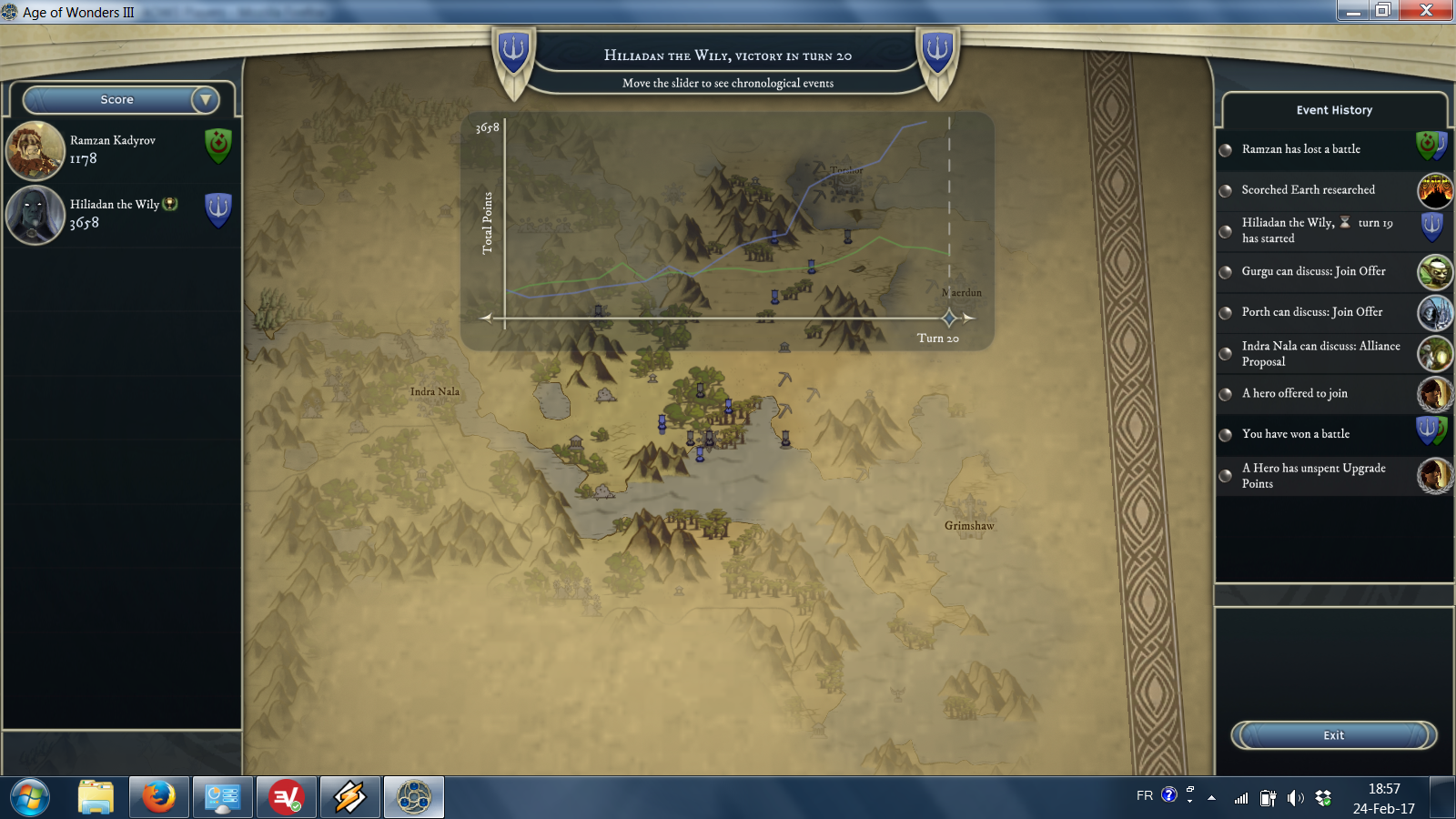 Any of the players in the team can host. The host must play in #2 position in the turn order (please check rules for more details).
Tournament Game #11 Round 1 !

I hosted the game: "Round 1 Match 12", password is "battlefield".
Please check the settings below: 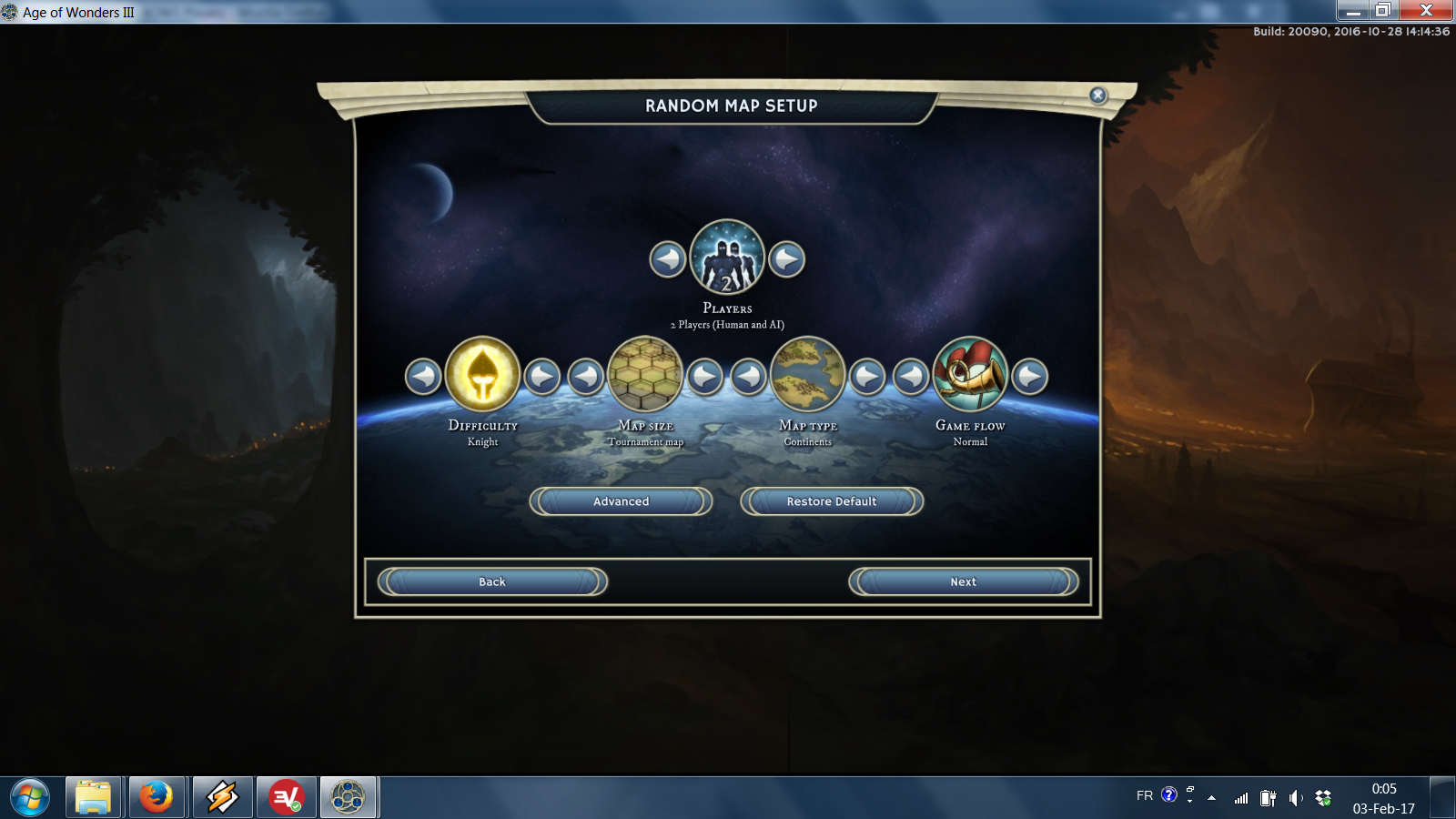 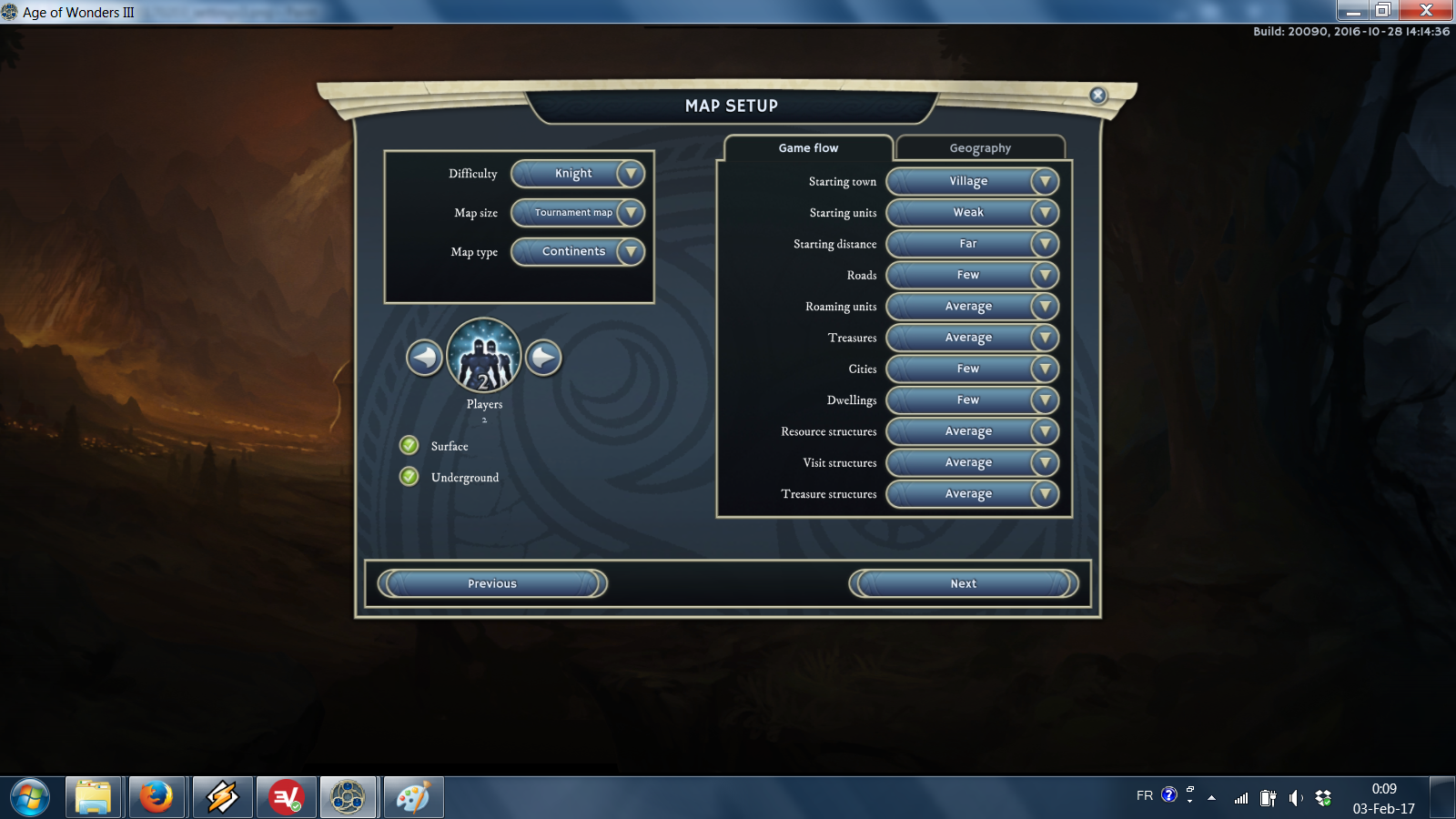 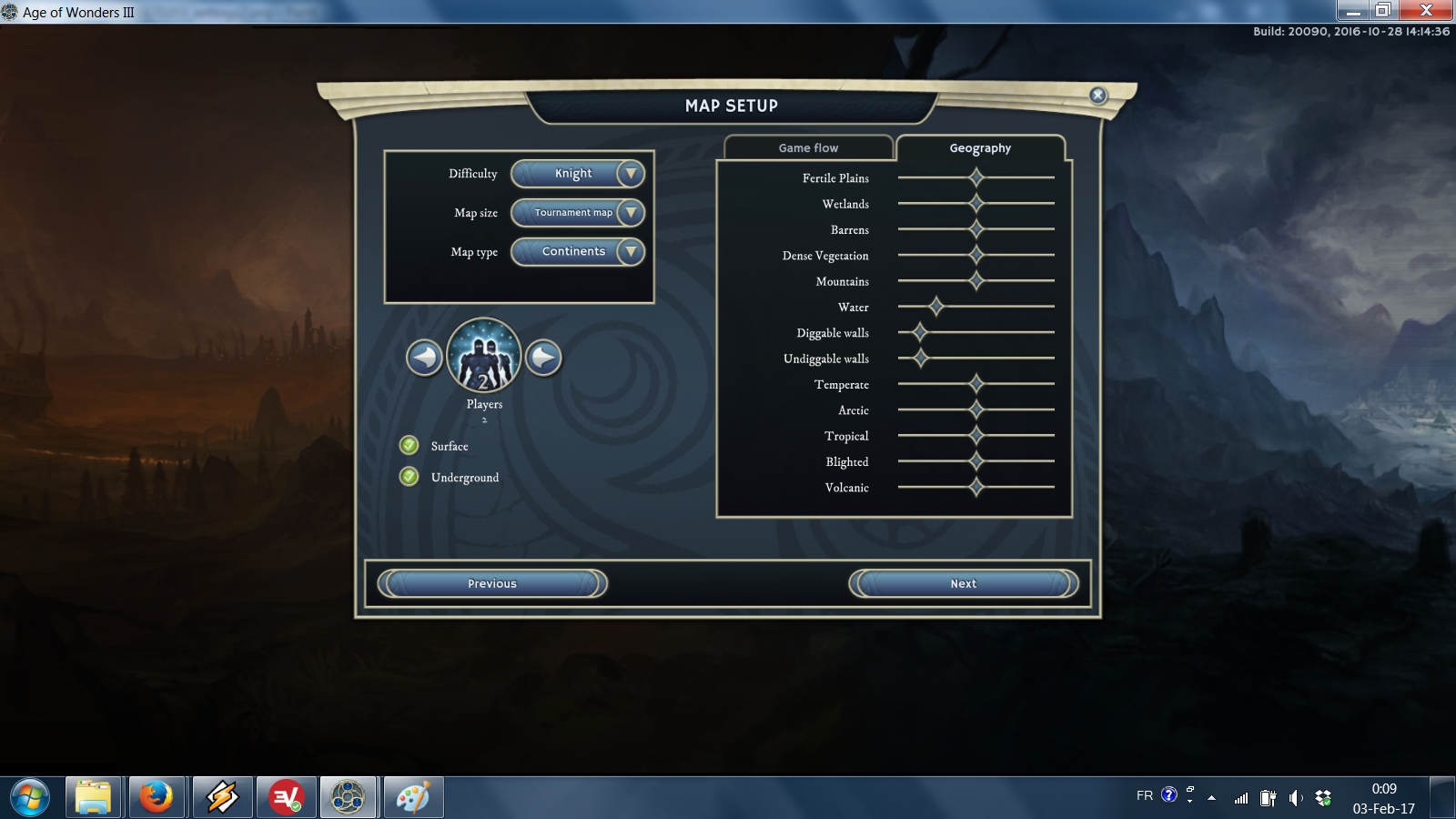 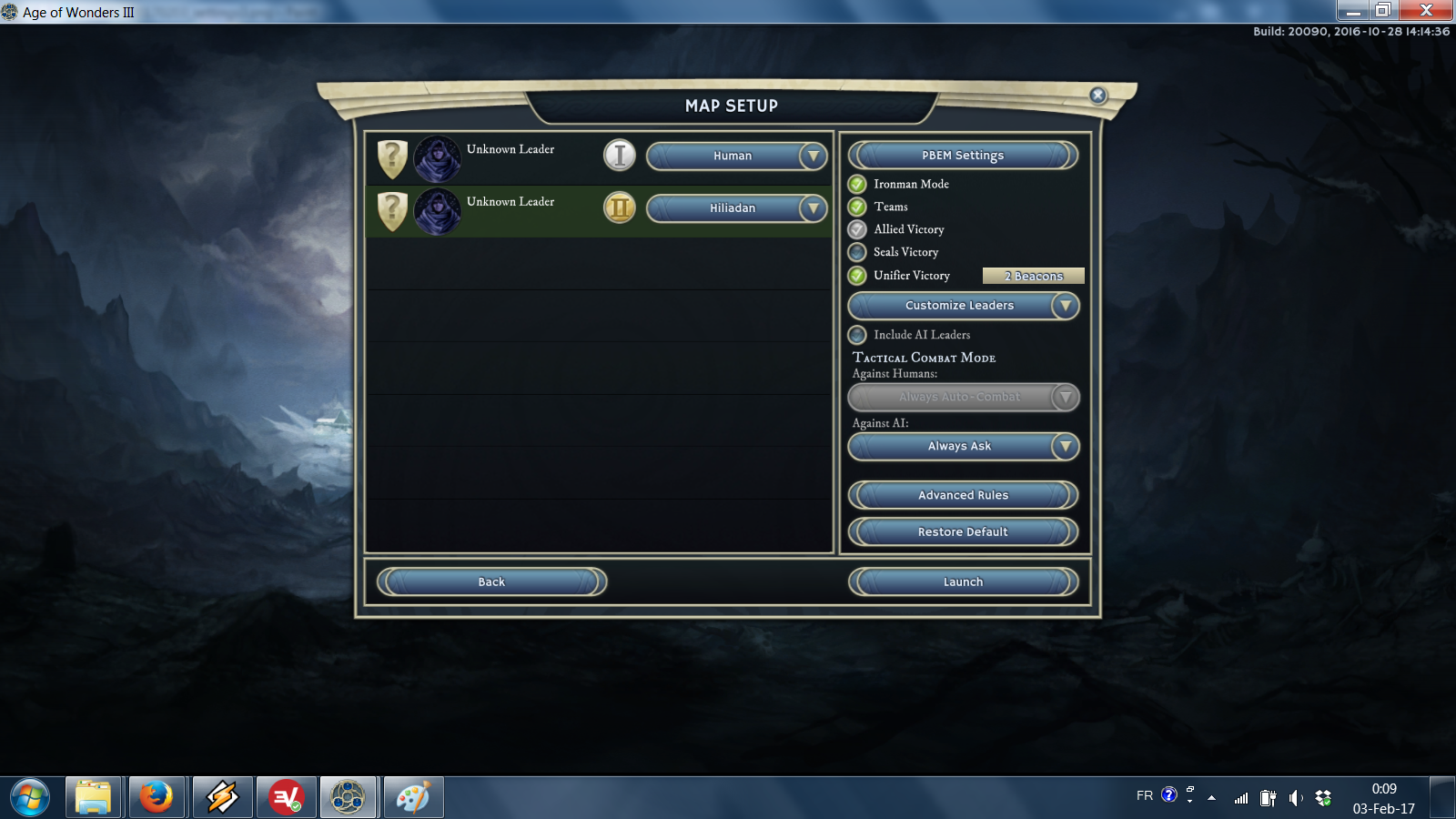 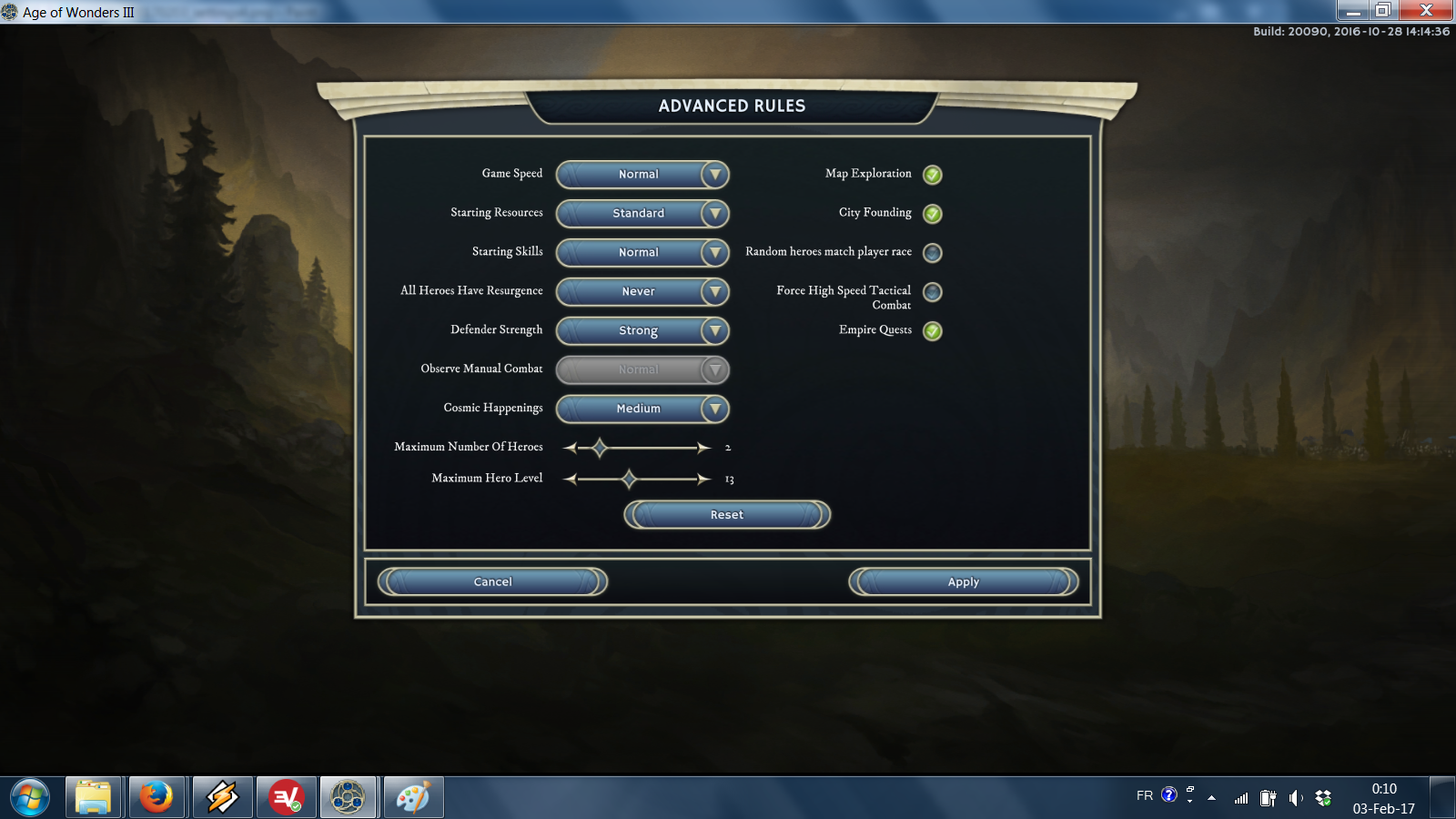 Please join after you have sent your class/race to the judges.

Hi Melciar! We're playing each other. Please send your class/race to Fistandantilus and/or marcuspers. I'm going to set up the game and post the screenshots.