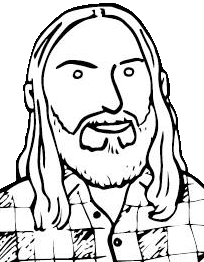 They will be announced in the Tournament PBEM Player Pool at the very least. They tend to fill up quick though, but if you subscribe at the Tournament Pool, then you will get an email, and can decide there and then

Where can I hear more about them? I'm not sure what I'll be like in a months time but would like to keep in touch about them at the very least!

Oh and I forgot to say, it's really nice to hear that the Acadamy games are useful! There is a lack of communication in my opinion, but still useful in many ways I can imagine. If you are interested Bishmanrock, I can host a game in a months time (the first Acadamy game is at turn 45 now and are really heating up!).

Yes I was Dwarf Dreadnought, not quite sure why it's saying different. Perhaps it messed up when I swapped the teams over to be correct, or maybe I just was being idle when setting it

Above its stated as Theocrat Dwarf, but maybe its an error in the display. Hiliadan can probably edit it!

Thanks marcus. Yes, i change it already. Bishmanrock played the dwarven dreadnought and I played the goblin rogue.

Congratulations to the win El Lobo!

Last battle. I was a bit lucky converting the T3 troll 5 or 6 turns before. In that battle I faced two trolls and two spiders. After one spider webbed my elite goblin slaughter the battle was on the rocks! If the converting would have failed it could happen that I lose my leader and the whole army! 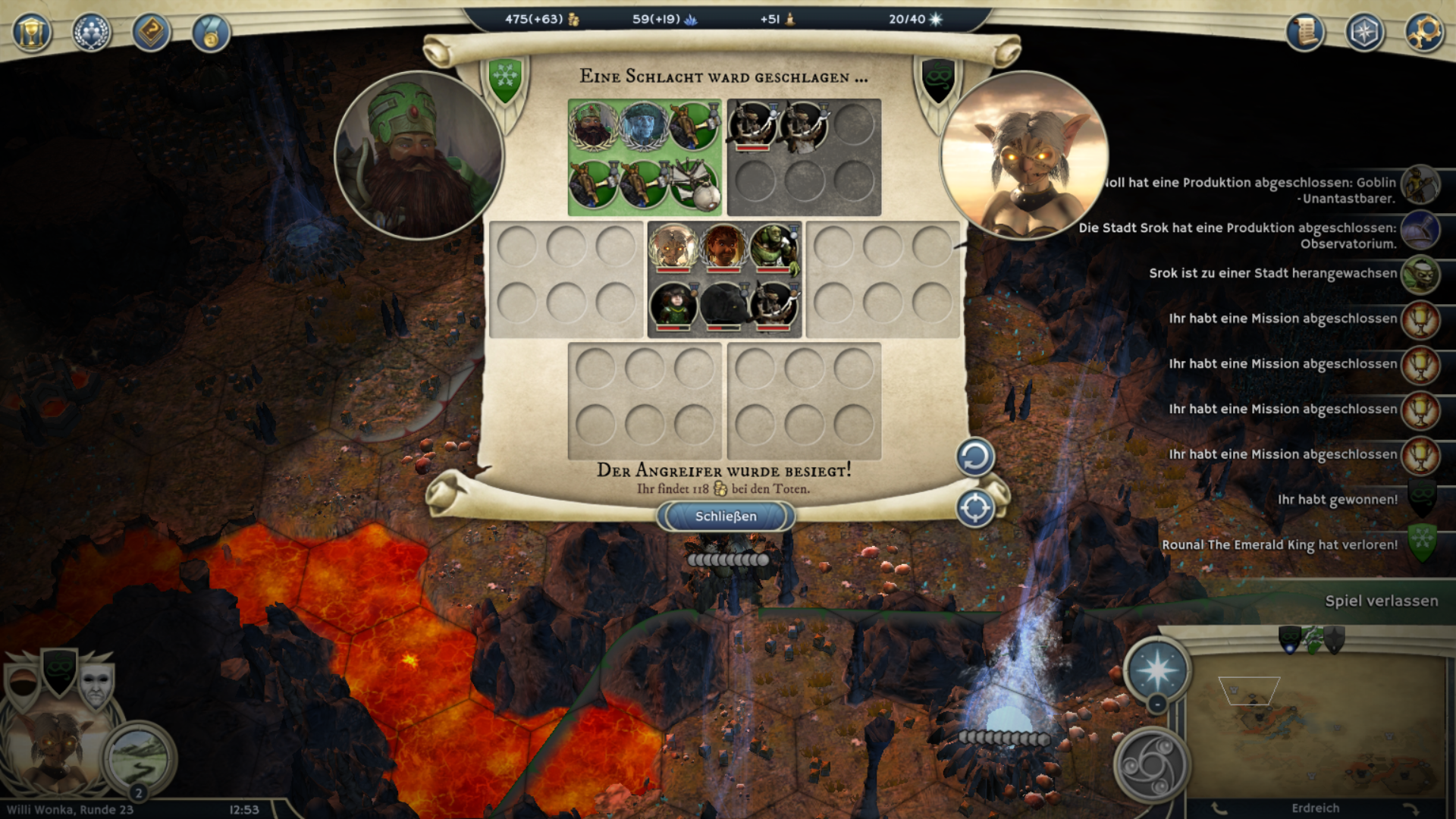 If the class/race are mixed, you can choose "Edit the report" in the drop down menu to make them right.

Thanks for the game! I think it would help you a lot do play a learn game with an experienced player where you can see the tactical battle. If you want to we can ask for a 2vs2 with some experienced players. I already learned a lot from marcuspers and markymark in the learn game I startet weeks ago and of course in the first round of the tournament against gabthegab.

Edit: The race/class is mixed up!

I surrendered because El_Lobo's next move would've been obvious (or at least I'd hope, he was right next to my capital having killed my leader!). Good game El_Lobo, you came at me from out of the dark!

You have quite a lot of them. I killed about 5 or 6 I think. And they are not innocent, they explode when they are dying!

The temperature is rising up!Â

Sounds like we might be evenly matched then! The only other games I have going on at the moment are a 2v2 where it looks like I'm going to be the first one out, and another that seems to be more role playing than competitive. Hopefully this game is enjoyable and a good learning experience for us both

Same for me. The first round was my first 1one1 online game. It was more a warm up for my opponent than a match. ^^
At the moment I play a 3vs.3 learn game. Two experienced players and one rookie in every team. I can see the turns of my teammates and hopefully learn something. Unfortunately I havn't had a good beginning...Â

Heh, don't worry, my last opponent made short work of me, I'm mostly a casual player so don't expect me to be swarming you by Turn 3

In the first round I havn't had problems finishing the game in time. Hopefully you need longer to beat me than gabthegab. ^^

Posted on forums with the issues we encountered.

If it's okay with you, I've set the timer to four days. That means you should be fine for weekends, but also means if anyone slips (I unfortunately skipped one or two in my last match), means it doesn't get stalled. Let me know if that works for you!

"Confirm game has started. Turn timer was doing something weird, instantly said it had expired when I started the game" Yes, it's a known bug I reported to Triumph a while ago. So it's better not to put turn timer on for the 1st turn but activate it only after.
If you could help me re-report it (because I checked and it appears I had not given them confirmation afterwards), that would be great and probably help solve it faster. You can quote my post where I explain the "2/" here http://aow.triumph.net/forums... and says that's what you experienced.

It works fine now. I have done my first turn. Are you fine with playing without timer? I can do more than one turn a day but at the weekend i could be that I need more than 24 hours.Â

Strange, it said turn timer elapsed under your name, but also said it was your turn!

I've removed the turn timer entirely for now - I'll reactivate it on my turn. Can you have another go and let me know if it works? The error at least disappeared for me.

I can't make a turn. The game said "Not your turn" (time elapsed).

Confirm game has started. Turn timer was doing something weird, instantly said it had expired when I started the game, so I've set it to two days for now so that it doesn't shortchange either of us. Apologies again for the delay in getting set up. Good luck, El_Lobo!
Published on Thu, 01 Jan 1970 01:00:00 +0100

Any of the players in the team can host. The host must play in #2 position in the turn order (please check rules for more details).
Tournament Game #28 Round 2 !

Third times a charm, hopefully! Looked like it kept all my old settings when setting this up so far as as my glance it looked the same.

I haven't put a turn timer on yet as it instantly appeared to start ticking down (not sure if it actually was or not but thought I'd just be safe), so I'll set it to 1 day the moment the game's good to go.

Again, let me know if you spot anything, but from what I could see it kept the same settings. 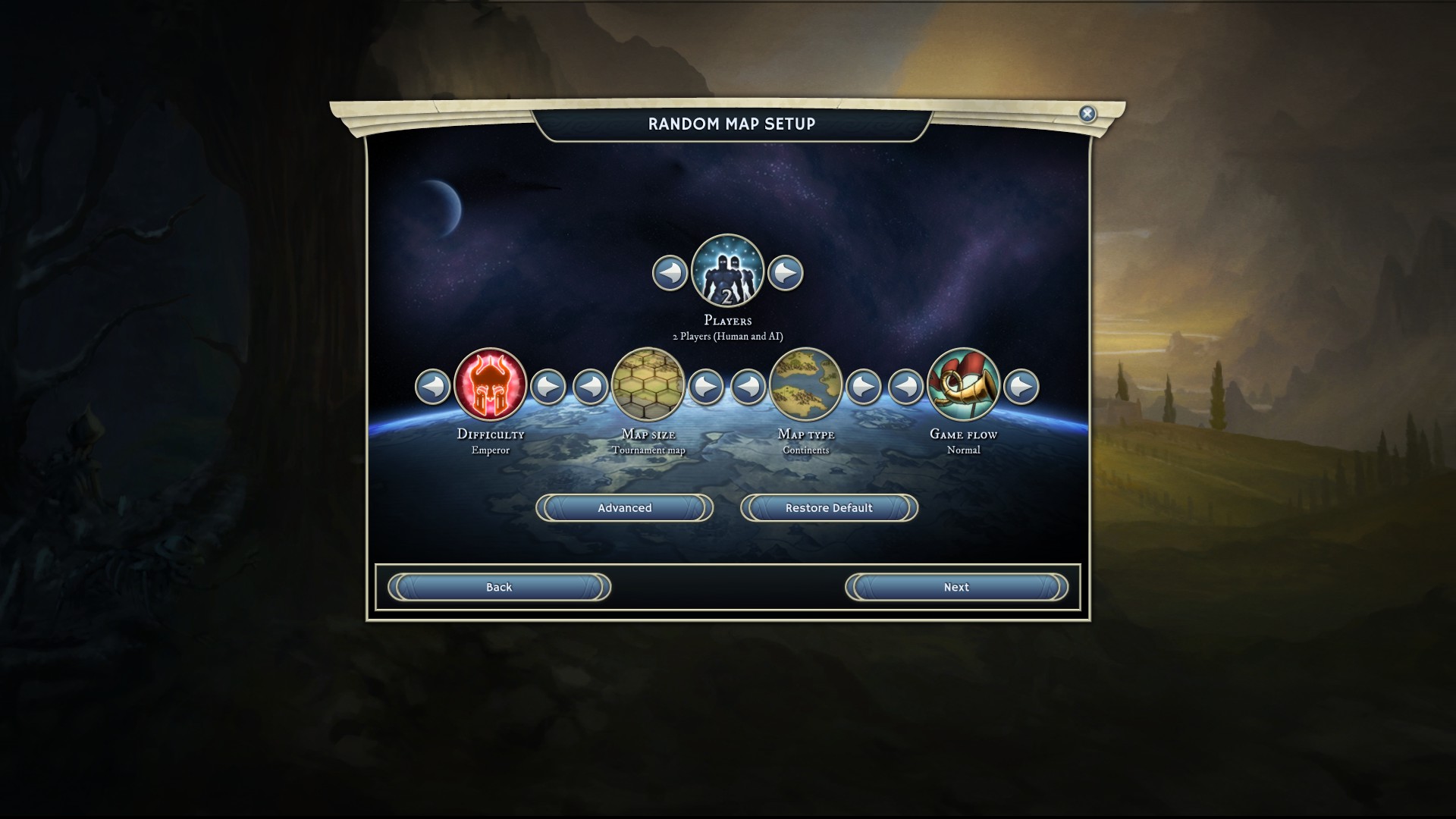 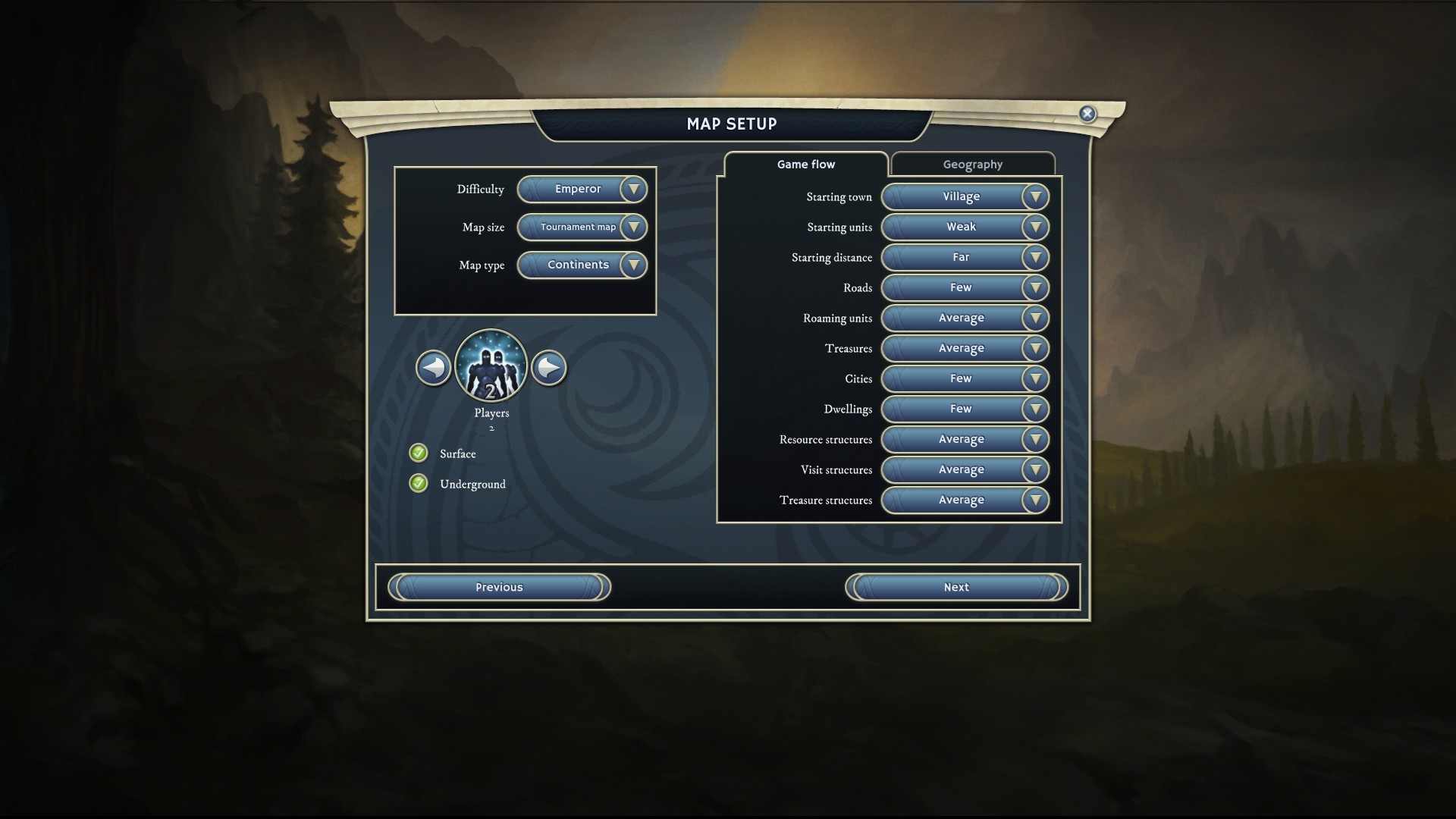 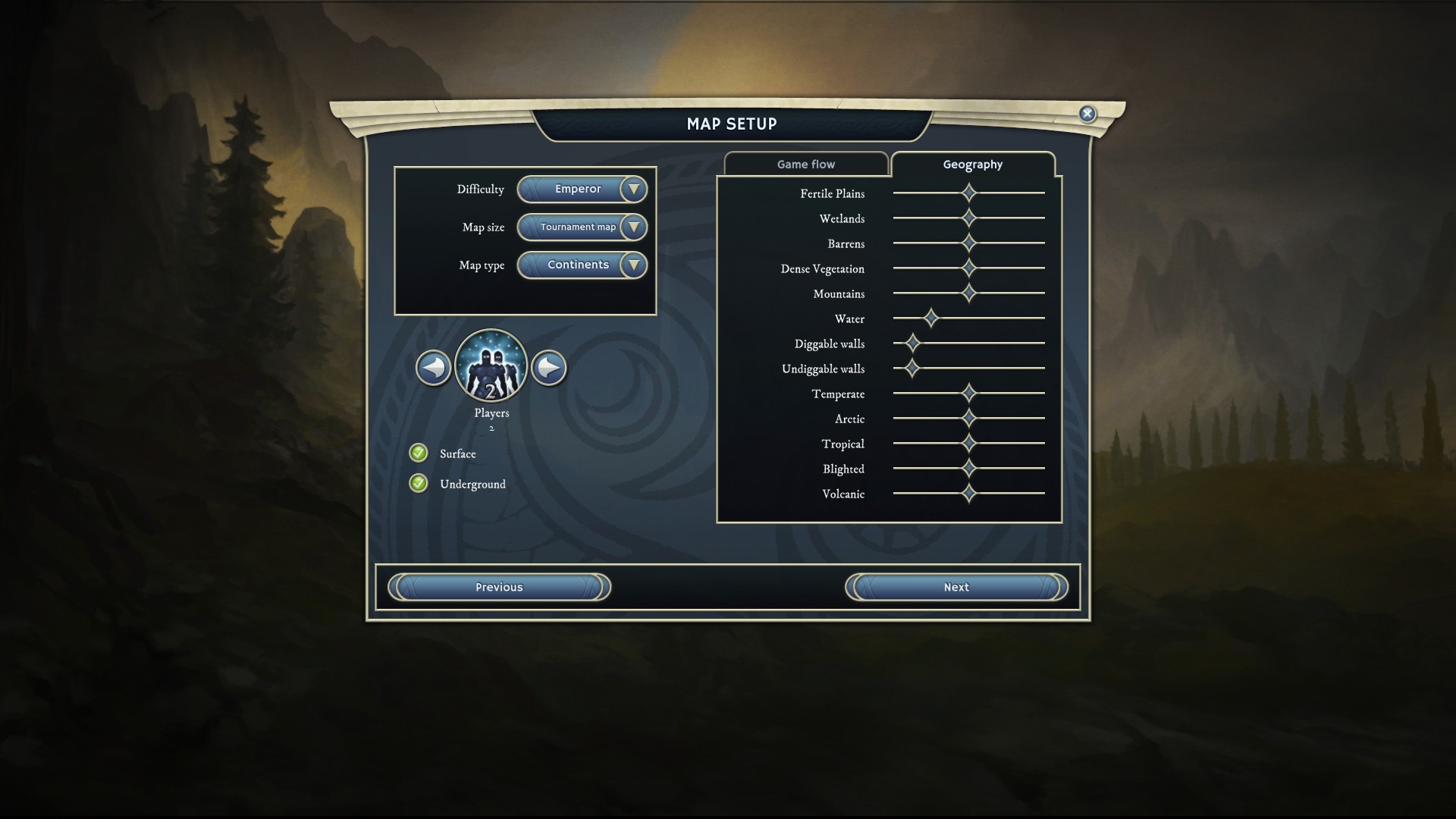 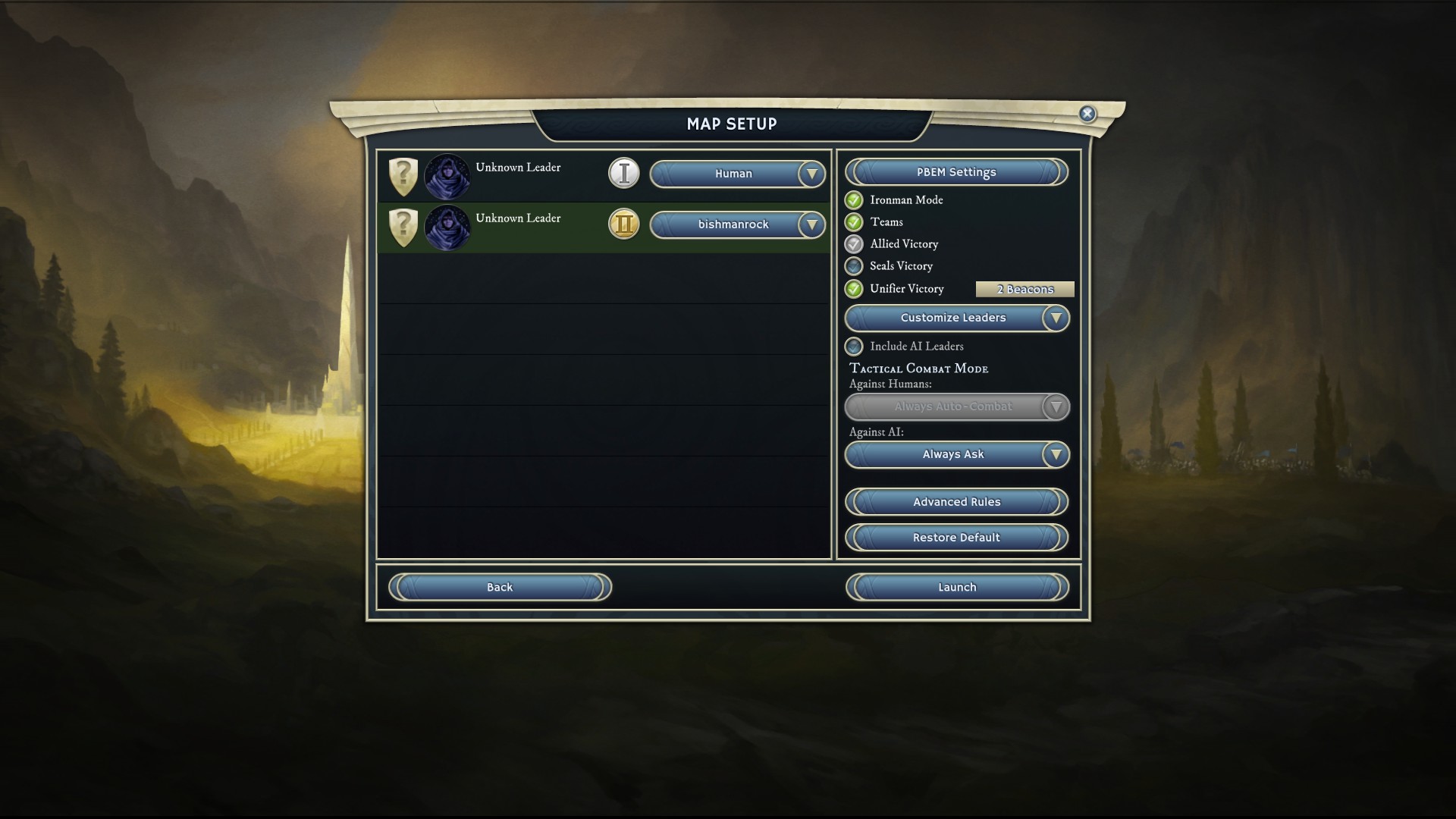 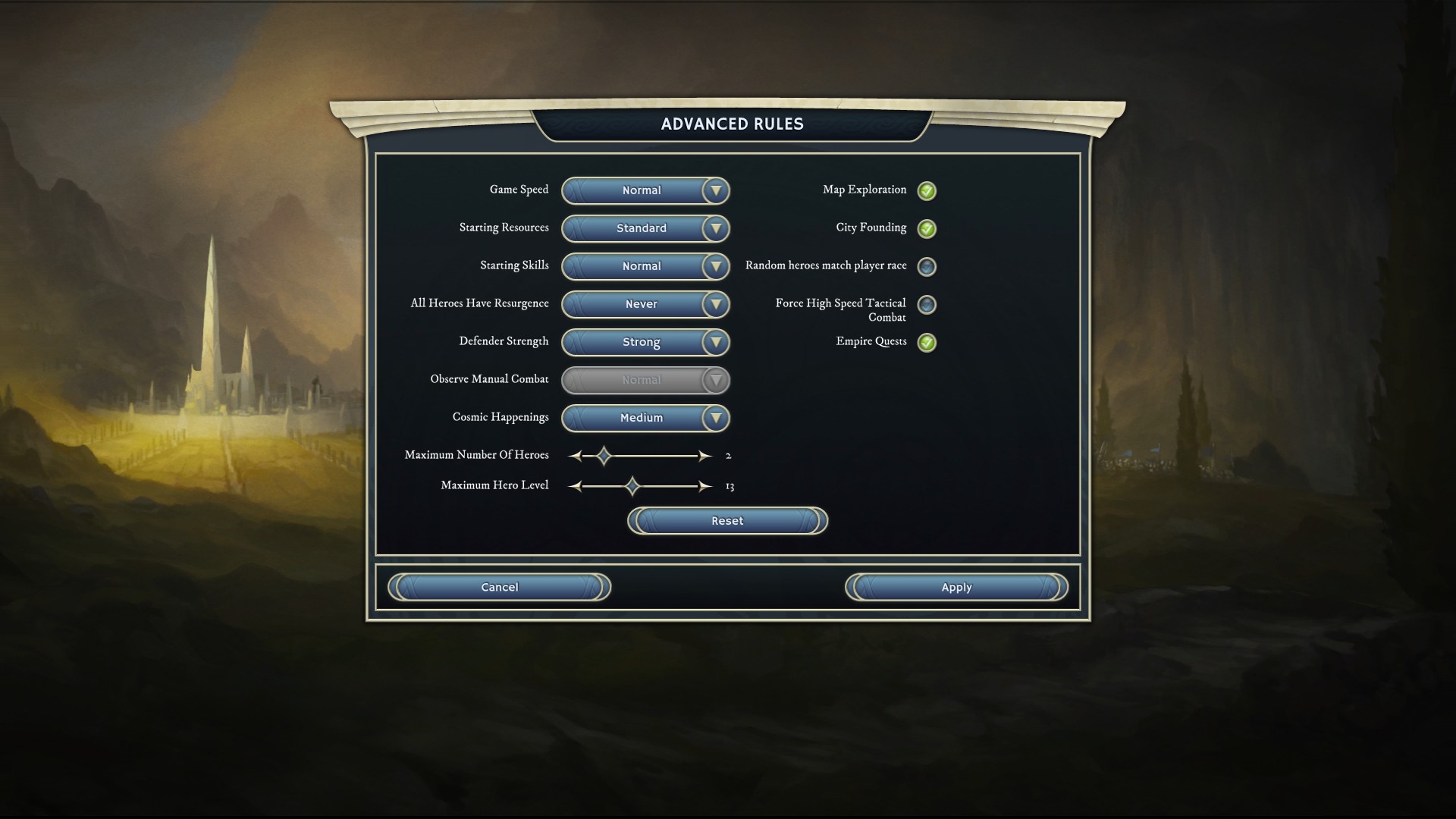 More than alignment issues, if omen of dove comes and you cannot the enemy because you are not at war with him. Even worse.

I spotted 1 issue: you need to activate Teams so that each player starts in one team (I and II) so that you start at war and do not need to declare war (which - among other things - create alignment issues).

Hello! I've now re-uploaded the game, same details as before. Hopefully the screenshots should be attached here as evidence too. Fingers crossed everything should be fine, but if any of you notice anything wrong just let me know! 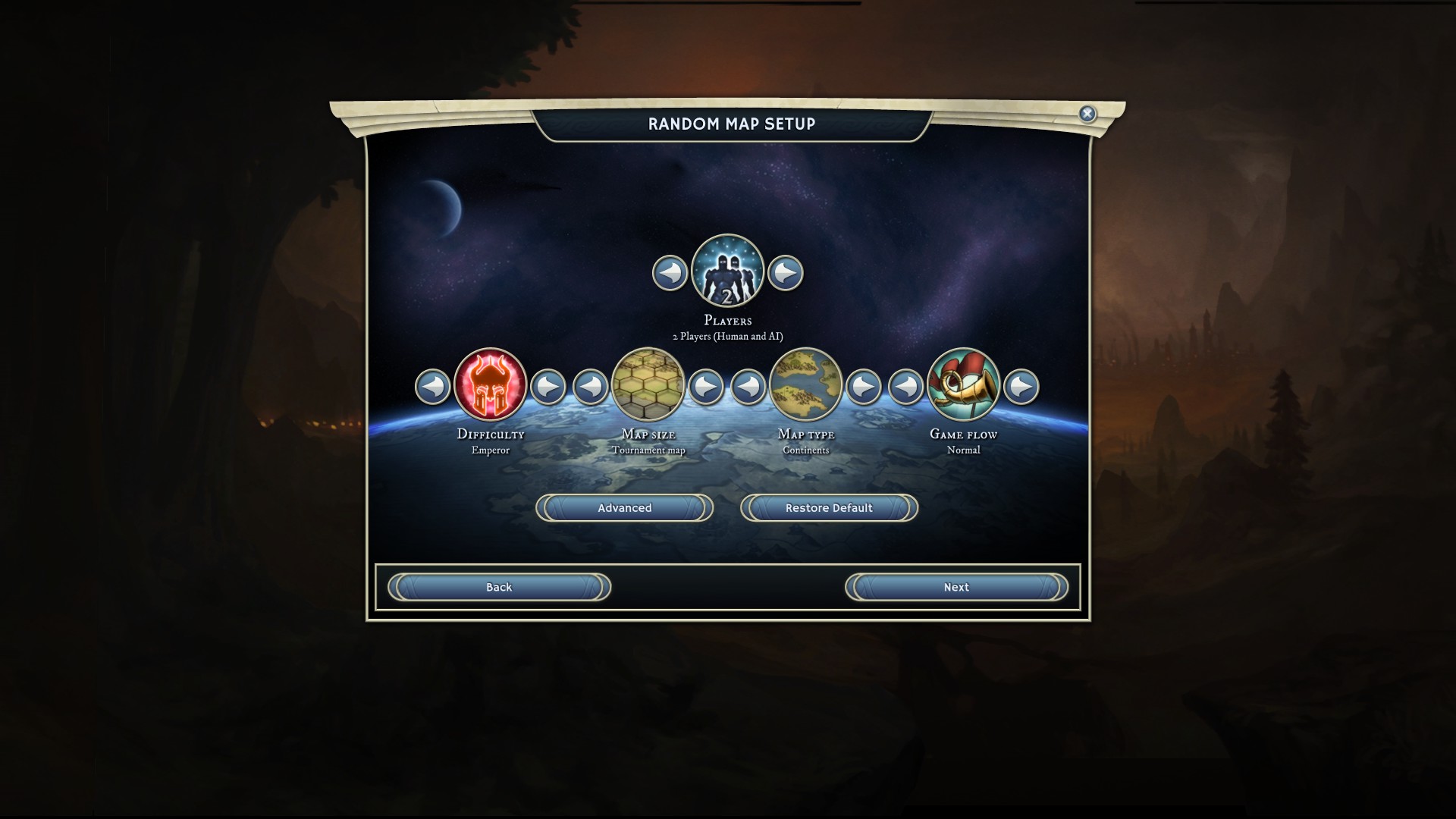 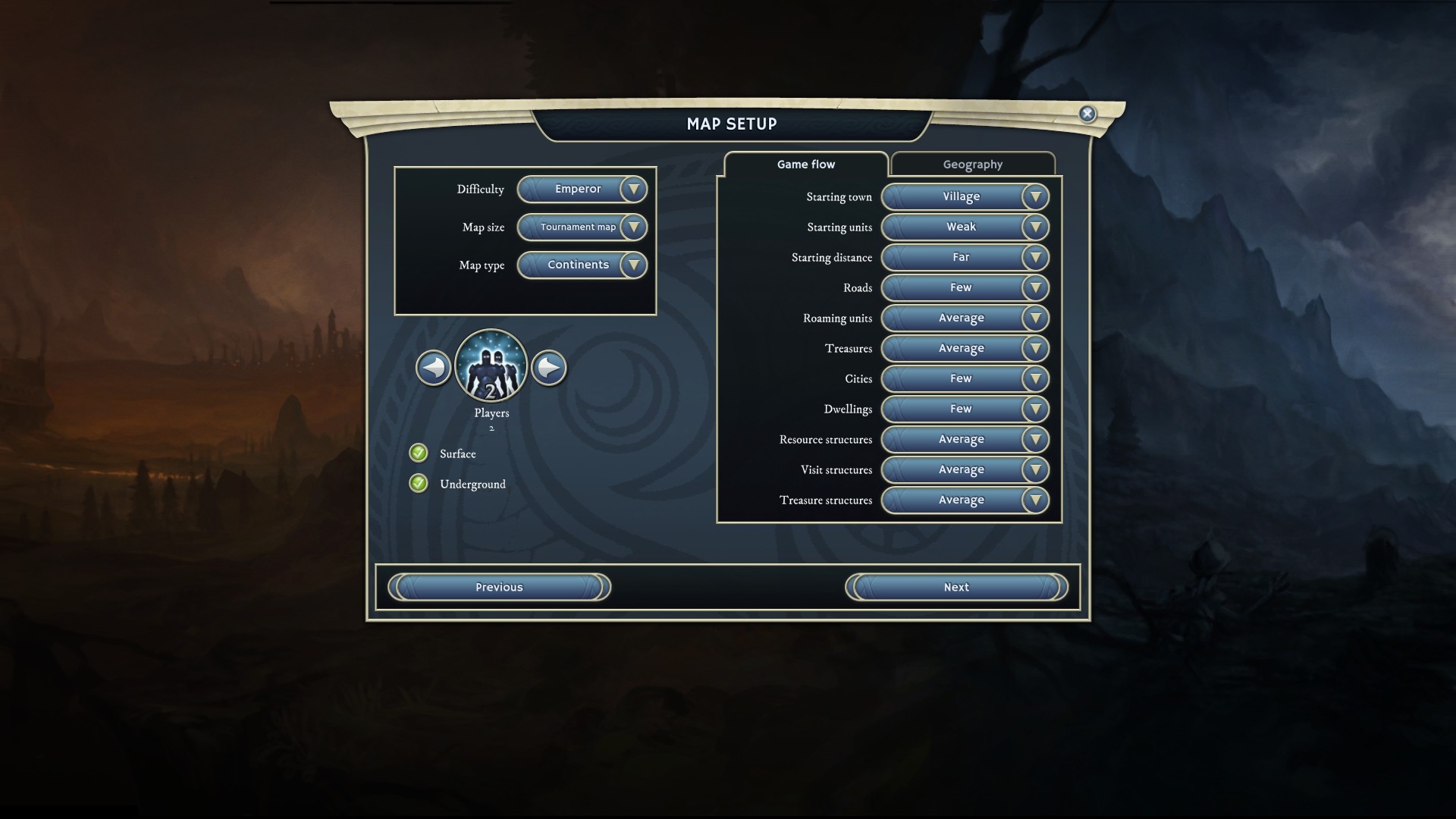 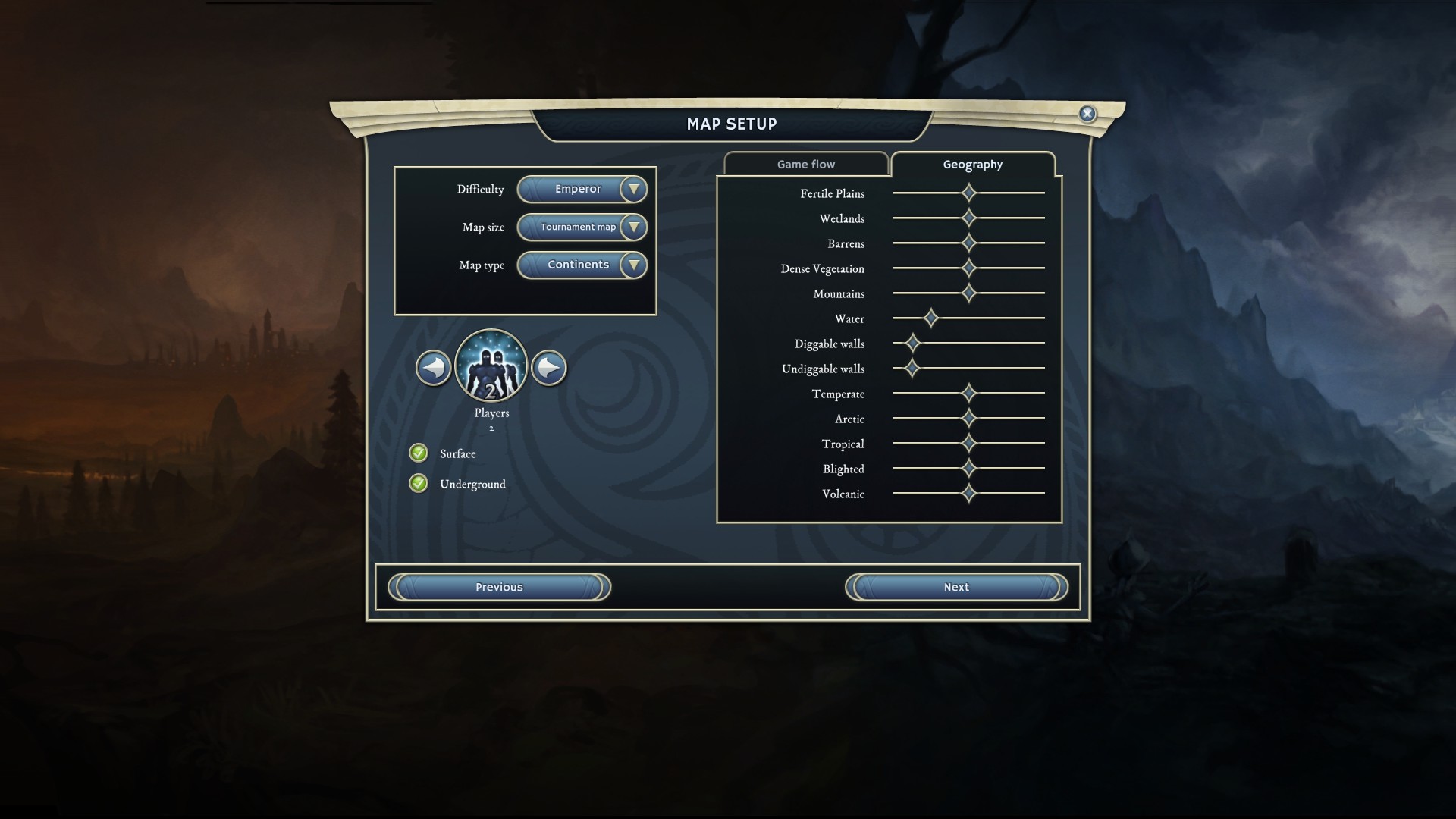 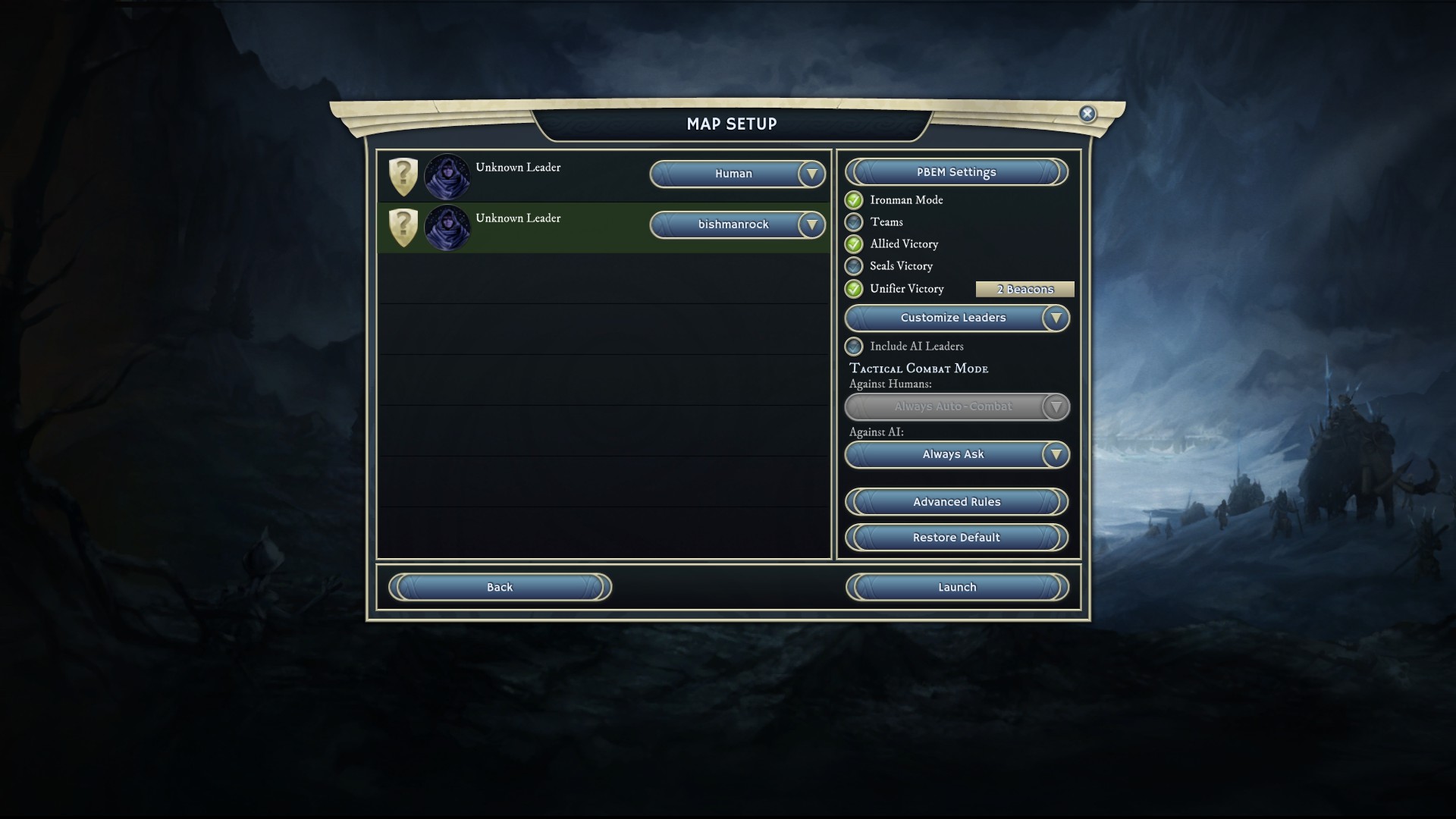 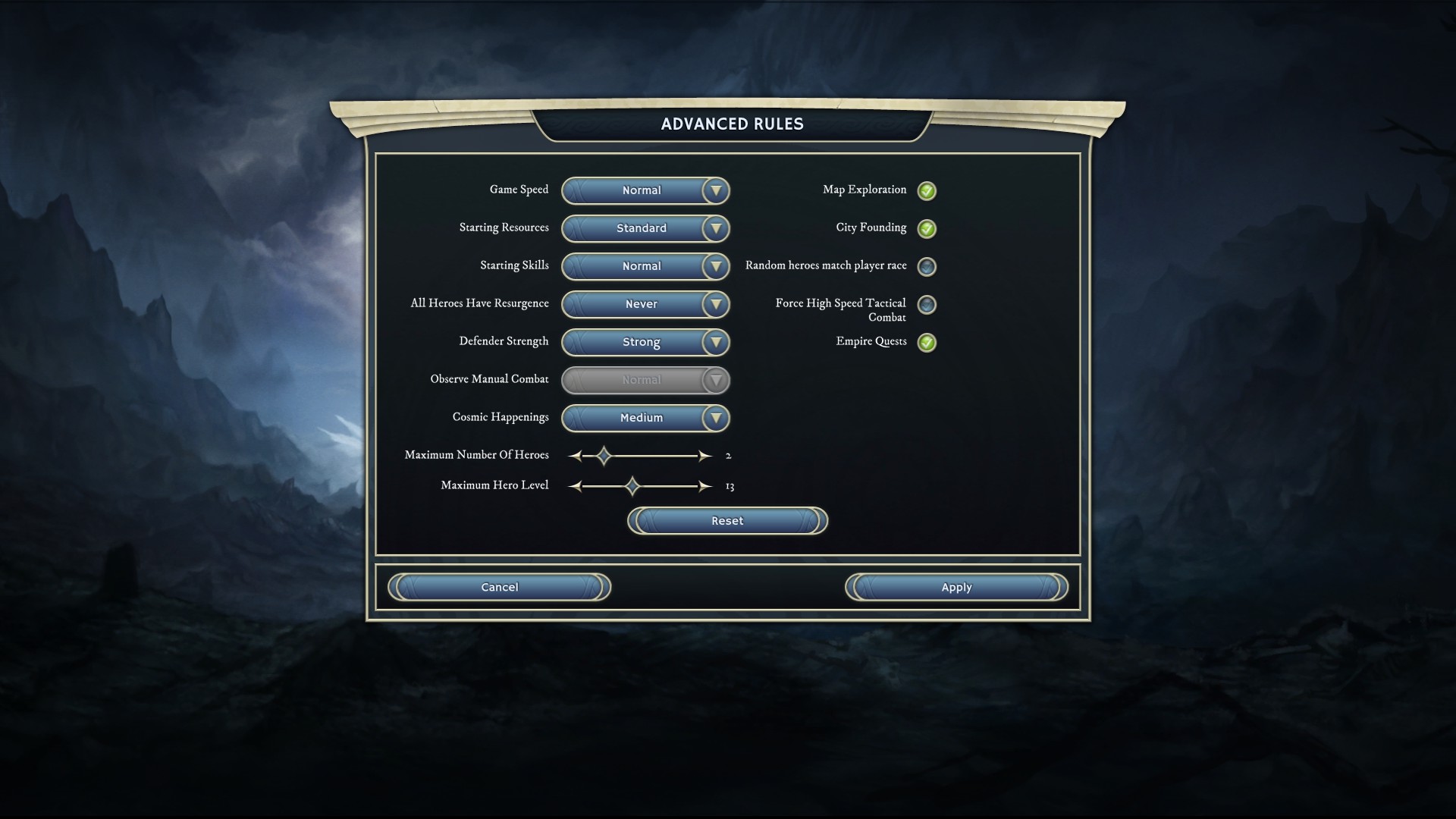 Yup, no worries. I'll rehost everything and screenshot/send details once I'm home tonight

Hello! I guess that's because Bishmanrock hosted with him on slot #1 and then changed his slot to #2 after game was hosted. Then when you try to join on slot #1, it crashes. I reported that issue a while ago to Triumph but they didn't pay much attention to it. Maybe report here to help me convince them to fix it: http://aow.triumph.net/forums... (see my post #249792 http://aow.triumph.net/forums... that's the 1/ in it)

Regarding settings, @Bishmanrock: it is actually not possible for your opponent to see 75% of the settings, only a few (as shown in the screenshot from El Lobo) are displayed, the rest are known only by the host. That's why we ask for screenshots done when you are in the process of hosting the game. You cannot take them afterwards.
So I suggest you rehost entirely, that will also solve the "join & crash" issue. Sorry for the hassle, but it will be easier for your next match, as you'll know the process.

Sounds like a know bug. Instead of select already made leader, create a new?
Try that, and if it don't work we will investigate!

I entered the game but when I click on "AuswÃ¤hlen" (could be select or choose in english) the game crashes. Tried it 3 times right now I havn't got a clue whats the problem.

"The program does not work right in due to Â a problem. The program is closed and you will be informed when a solution is available."

Sorry, perhaps I was unclear

I've tried to set up the game with all the settings as mentioned in the guide and on the BETA branch. When I said I sent it to El_Lobo I just mean to confirm that I had indeed done that, and that it shouldn't be different to the tournament settings, before we start.

I'll get a screenshot up to confirm as soon as I can though!

I guess that's fine, but the judges can then stop the match and you need to rehost if any major mistakes.
But, on the other hand, all settings are up for discussion, and as long as you agree that's also fine.
An exception would be, for example, if the game wasn't hosted with beta branch.

With that said, I dont see any reason not to post the settings (screenshots) here and we can keep the discussion on the forum.

I've now hosted the match. Details sent to El_Lobo. El_Lobo to check details of match to make sure I haven't made any silly mistakes. I did go through the guide so should be fine but I like to make sure. The only thing the guide didn't mention was difficulty, but I'm guessing setting all that in Advanced overrides it anyway?

Either way, El_Lobo to let me know if there's any issues. If not then I'll post here once the match has started.