Interesting game - and hard to lay siege on a dwarven warlord in the UG with halfling buggers, which are not the fastest guys down under. Therefore, the game reached a stand still around turn 35-55 where I was on the defense in the mid UG, while scouring the map for treasure sites, vassals, experience and some extra units from evangelists and my leader. Exalteds (both from martyr and built from cities), wyverns, sorceror heroes, converts, plus some of those nightmares coming on in with being all evil on turn 50 something made the way for an ambush on Olop´s leader after hasty the capitol (that I´m pretty sure was relocated close to the SE corner of the UG map) for extra cash to empty an inn on the turn before allowing an attack with numbers of troops if quality might have been lower as he had plenty of firstborns at that stage.

Congratulation, nice win for the halflings. 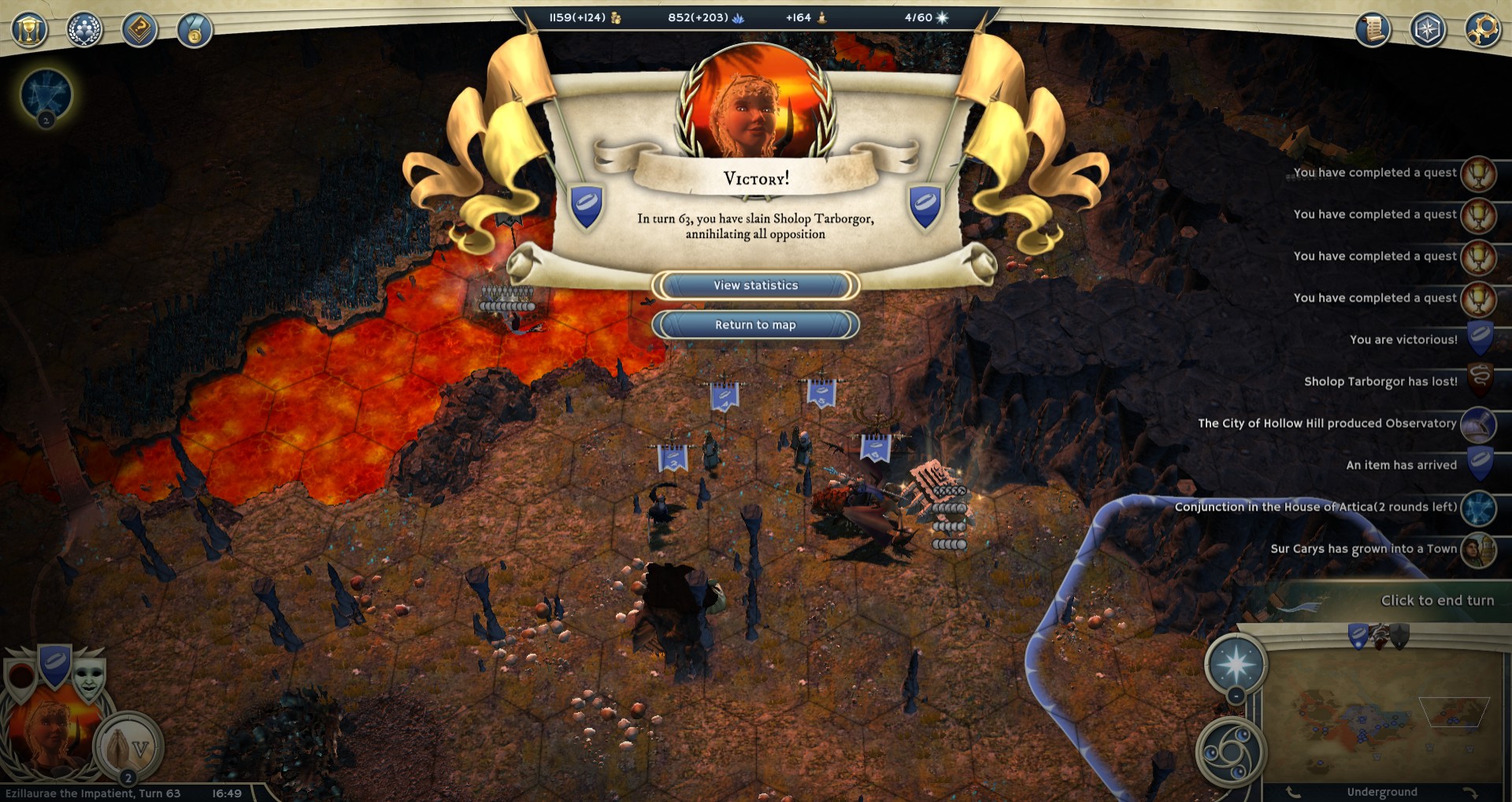 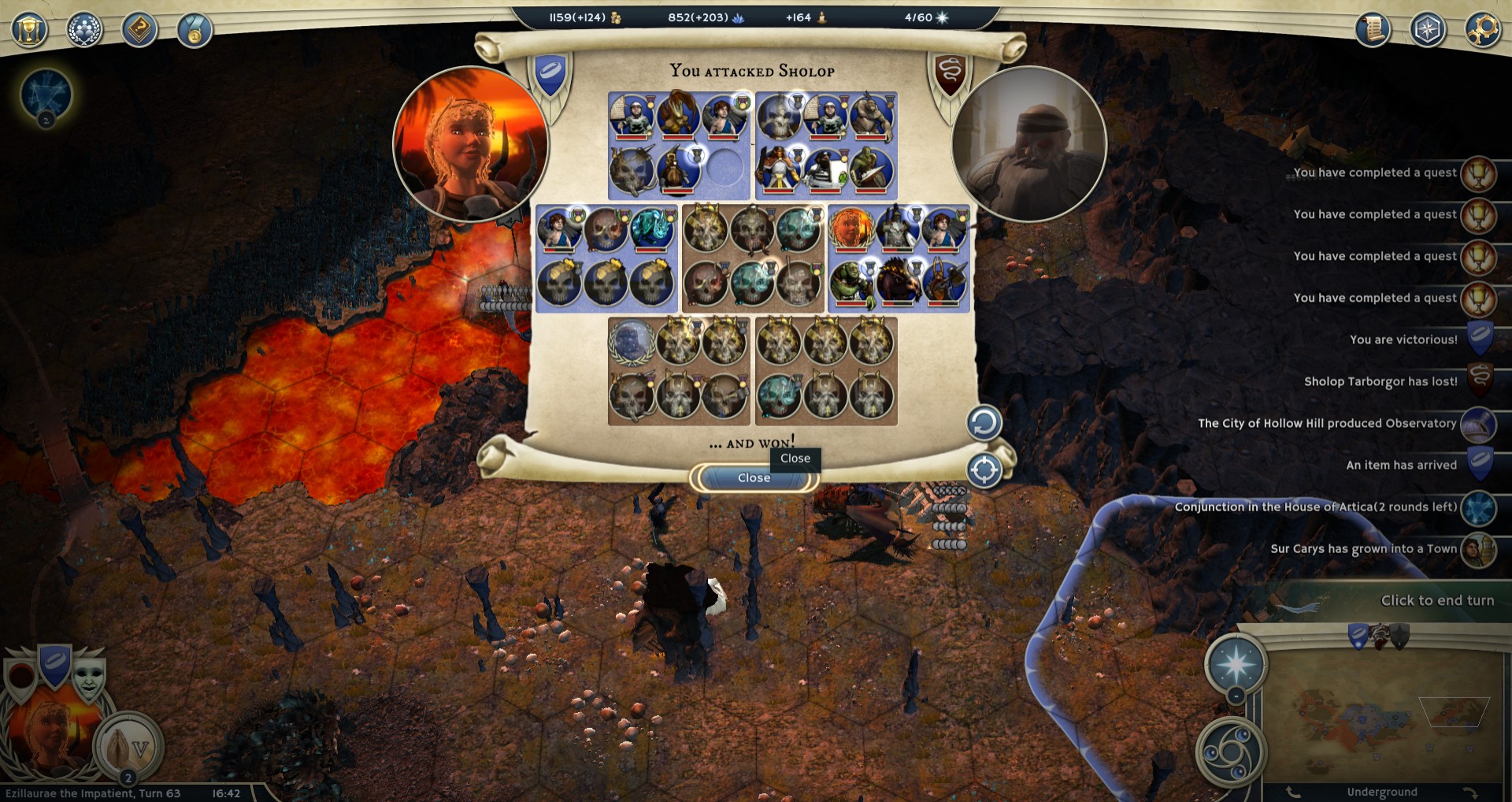 Hello! Could you please update us on the status of the game? What turn did you reach? In theory if you finish soon, we should be able to start round 5 soon after. We may need a few extra days to make sure the latest changes brought in the 2nd release of v1.22 are stable.
In any case, the deadline for the end of the round is in about 9 days.

I do not have an issue waiting, but the tournament is currently
waiting for this game to complete.

I will send an PM to the judges to see if it is ok to wait.

The headline might not be completely true, but I have too many games (8, I think) running and itÂ´s getting hard prioritizing which turns to make in the one half or whole hour I occasionally have during the active (awake) hours of the day.

I want to prioritize the tournament games, but IÂ´m also in some games with many players where people might be more reluctant to let the games drag on.

IÂ´m on holiday at the moment until the 3rd of August.

I hope you can accept my absence in that period if not - please tell so, so that I can just burn my cities and concede the game (I could also merely surrender immediately)?

I think around 30 something.

Hello! We haven't heard much from you so I guess everything is going fine!

What turn did you reach?

Please click here to read the rules. In order to avoid advantaging one team or the other, for each match, the team who will host the match was randomly selected.The first team in the "turn order" above (who is also the team on top in the tree here) must host the game. Tournament Game #33 Round $roundza ! When players do not show up for their match, the Tournament Judges have the right to change the match!

Ezekiel sent me a PM. Â He asked how I quickly I can play in July.
He currently did not have an open slot and has some RL stuff
(moving I believe) coming up later in June.

In my previous two matches I have played many turns in both
games quickly. Â Many times playing multiple turns in a day. I
have my normal availability in July.

I told Ezekiel I did not see an issue with him finishing a game
(he thought it would be fairly quick) instead of quitting. Â Once
he has an open slot he can join this game.

I suspect the pace of the game will be slow the first few weeks,
but once Ezekiel's RL stuff completes the pace should pick up
considerably.

I expect to be able to complete the game on time.

Hello there! Did the match start? If yes, please update its status to "Ongoing", thanks!

Settings looks good and both players class/race received, you are ready to go!

Here are the screenshots of the game setup: 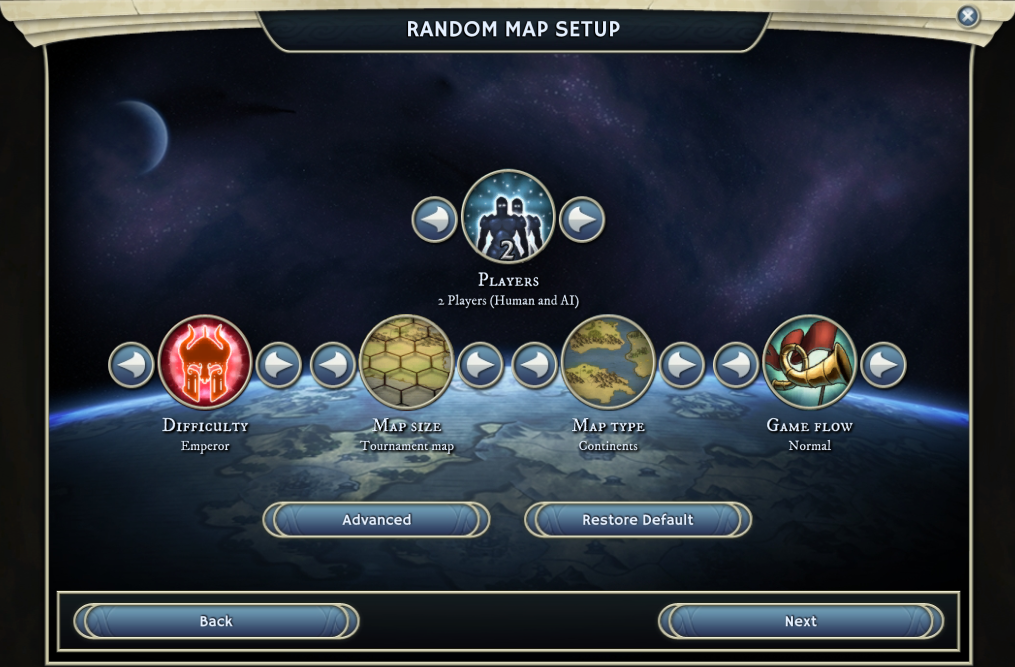 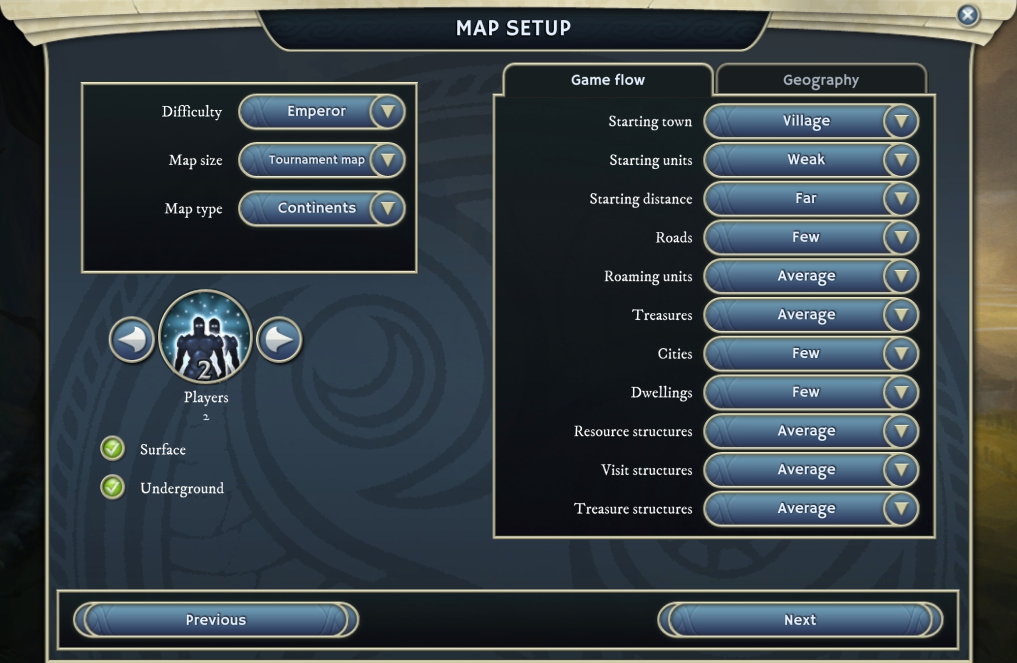 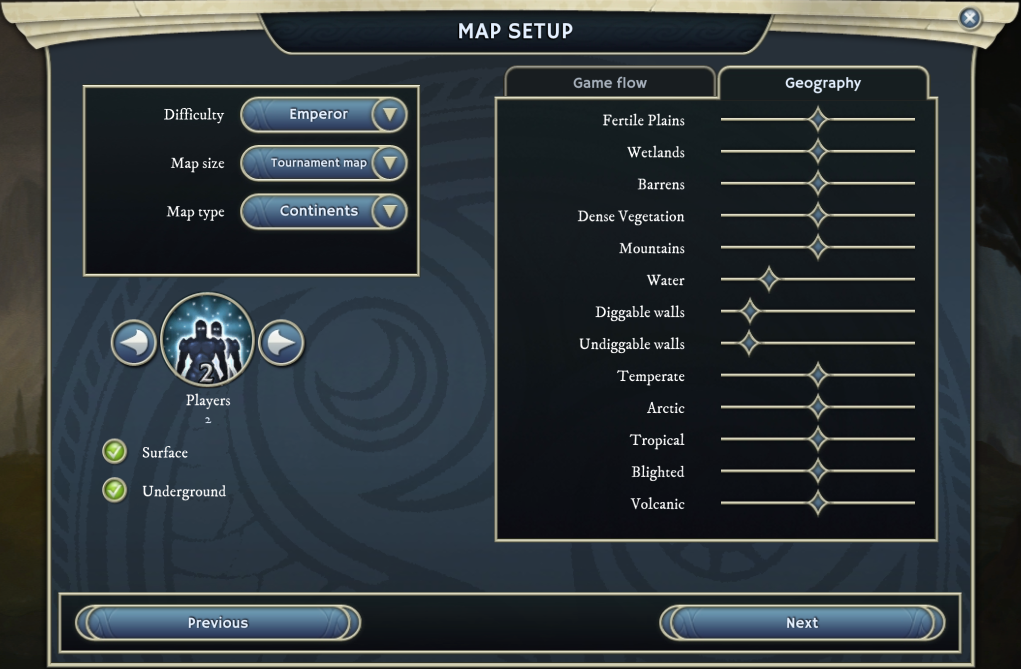 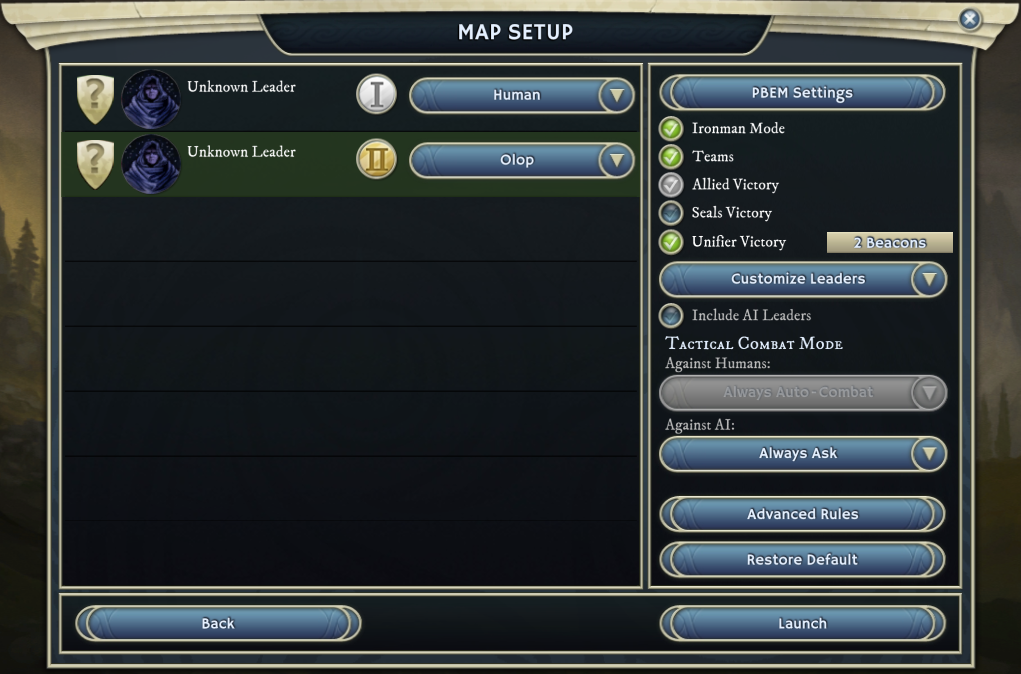 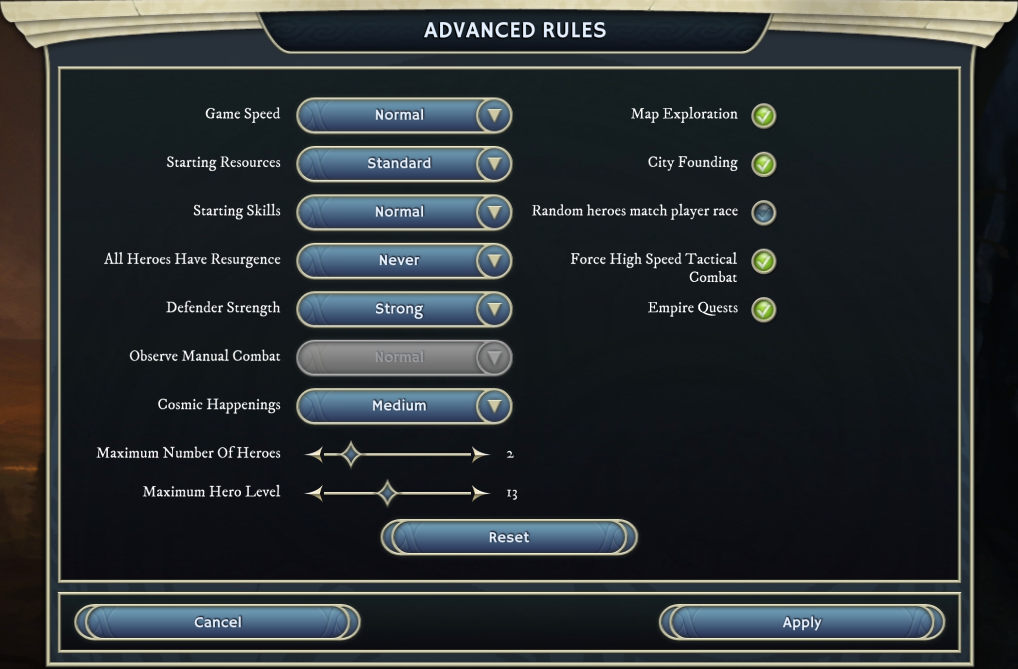 Game has been setup: