Reserved for a report

Good Match, i had not good start.
All was going to a win for jean, but then it was a big surprise, i won the battle with my weaker units.

I give the game up, because he is going to strong, and i have not seen how i can attack myself.
So he will go stronger and stronger, and there was only a question of time.

I tried him to convice to make a final battle on neutral terrain (3vs3 and final 1vs1 ) with no spells in preparation. But
He wanted not, too much random, but when he shall play live multiplayer:-) all fights are random between human.

But okay, maybe it was unsure for him.

Thank you for the game.

Â
I was very much upset about another thing actually: the losses. Like Markymark didn't even lose any of his heroes (and they were weaker in stats than mine and lower in levels), neither he lost his expert martyr halfling. Actually, I think that with all buffs from my leader (melee,defense commands, blood honor, etc) my forces could have killed at least one of his heroes.Â That would be fair. But no. It also seems my leader didn't cast any of warlord powerful bufs like last stand, lion's courage. Really a shame.Â

I eventually watched the fight. It's a surprise that Mark wins but at the same time he did exactly what had to be done to beat you:
- he chose Poison Knowledge on his Rogue and let him lead 1 army and he chose Sacred Arms with his leader. It meant his T1 with Lesser Mighty Meek got a new damage channel and got the damage bonus twice.
- he cast Mark of the Heretics on your stack. This is also doubled by the double damage channel. Thanks to these 2 things, he did insane amount of damage on your units (see 10+7 and 17+10 damage on your Rogue female hero from a Martyr (!!!) and a Farmer)
- he put a Cherub on the aisle, attracting your Cavalry units
- he was on favourable terrain
- he had Martyrs to absorb the damage

I think in manual human vs human, he had a good chance to win too.
Mark, did you have the RG1 bonus on your Nightwatch?

I was worried Halflings had been boosted too much (especially Lesser Mighty Meek) all along and froze several boosts to them, waiting to get more feedback. It seems I was right and maybe Lesser Mighty Meek should be nerfed.

You were unlucky Jean but at the same time, Mark - without knowing it it seems! - played well. If you replay the fight several times, I think he would win most of the time.
In attack, Jean would probably have won as he would have chosen the positioning, but not in defense.

One thing I forgot: It seems like beinning the figth (like defenders always do) isnÂ´t good at all. This leads the units to spread even worse than it is already the case due to the 2-1vs3 set-up.
Some units attack in the first round and get killed easily. Maybe it would be possible to put the attacked unitsÂ more close to each other in the fight automatically. To strenghen the AI-tactics in combat is even more unlikely to happen.

But as you said, it seems that we have to Adept to shit like this - knigths would be rather bad Units if you have to attack a City with walls, though

I have nothing against halflings actually, I think this race deserve some unique features like luck.
I just wanted to show how unpredictable and stupid ai actions can be not just losing the battle which could have been won but losing it in a way like this =)Â
Of course it was painful to watch 4 strong mounted units running after a cherub while the other units were just dying.
This can be a very good example and warning for our future games: either attack with such overwhelming forces that your opponent can do absolutely nothing to win the tactics or be prepared to lose to random.Â

Being attacked from 3 directions is always hard to take in autocombat. The bushes made it even worse.
Another stupid act of the AI was to run away with the warg and didnÂ´t kill the cherub - maybe IÂ´m stupid, but I donÂ´t think itÂ´s a very good idea to send nearly 3 mammoth + 1 Knight to the cherub instead.
Maybe they lost half of a turn therefore.
Other Things I noticed: As the cavalry finally arrived, they met lucky enemies as they did their non-devastating charges.18:07:04
And the tigran Heroe got at least 2 times thrown by an iceball, but didnÂ´t get frozen - Dunno about his resistance.

Like written before, the damage of the halflings was fine, too.

But what is your main Point now? Debuffing Halflings or work on autocombats? I doubt that is going to happen.


As Mark wrote, another stupid Thing of the AI is not to use his bast spells (e.G. sorceror with mass stasis casts the 5CP spell each turn..)

in the game i have much mana, give a hero sadism, but he has not used, the best spell for a big battle is not used / give more happiness and damage to own units. i hope he can used this spell and make my army to fighters. I can not complain, but next time give another talent to heroes.

i wanted give up after attack, planned only against 2 stacks, but then i saw three stacks, so i wasÂ frustrated.
But i do not like only defensive battles, because, when i'm rushed and can only hold my capitol, i will lost game too, because he can build more and expand more, andÂ i can not. And more units i can not produce without losing cities in near. (best unit is crusader for me, not really strong)

I try a suicide attack because the attacker can determin position, his leader stack was in middle, was an advantage, target ist kill 6 bevore next 6 is coming and then i fight on my terrain, more luck and more happiness.
But not played yet, it was a suicide attack, maybe i shall give him the win. But we have time to play.

things to note in regards to Halfling buffs

the mighty meek that halflings have been given
brew brothers did HUGE damage with throw cleavers ( seemed way to much )
also was the phys weakness of halflings removed by accident or reduced ?

knights and mammoth riders should have stomped halflings....


not sure what else to comment , but this does seem a bit of an outrageous loss for Jean....


and marky , much respect on the suicide attack ( took a page out of my book )
but quite surprised at this result

Halflings became much stronger, yes.
But what I'm more concerned with is the following: I strongly believe there should be done something with ai fights.
Really, on manual halflings army here has almost no chance cause frostling can reunite the army moving with a "wall" of mounted units backuped by archers.
Ai just runs in different directions do not taking into account anything. It was very painful to watch my bard running toward my opponent's stack, failing to charm and dying next round, etc.

Wow. I meant to mention halflings in my round 1 post game report but forgot so I will say it here. I can't imagine what it would be like if the +1 defense / level difference was implemented.Â

So in my 1v1 game vs dreadreaper: I do not have proof, but I swear a halfling engineer hit my DRACONIAN secondary hero for 32 damage with a blunderbuss and killed him. That is with no critical strike. The damage flashed in front of me very quick and I should have confirmed it.Â

I also picked up an adventurer as a reward from a bandit spawn site. The guy was hitting pretty hard for an irregular.Â

The mighty meek buff was showing as a buff even when my adventurer was targeting another tier 1, like archers or pikemen. Is that correct?

Some unexpected news from the battlefield :)

Hello, guys.
We're in the middle of our tournament game. Last turn something extraordinary happened there and I want to share it with you. Markymark has already allowed me to post this info so, I think, there is no problem about it.

So, my plan was to take frostling warlord and rush Markymark. When I found out that indies managed to capture his throne city for 1 turn, I decided to make it all-in rush strategy coming to his domain as fast as I could.Â
Though I lost several turns due to embarking and struggled my way through marsh flats I had already been on its borders by turn 20. There I even managed to clean several sites

, found Markymark's army and approached his cities. Mark decided to stand in his vassal's city hoping that I wouldn't attack it on auto regarding vassal's defense. So I made up my mind just to go further and capture his other cities forcing him to act.
I want to add that I couldn't avoid a fight on the terrain favourable for him cause it was his domain full of grass, trees and flowers. And I couldn't really make a good positioning cause halflings are fast in forests and can easily choose the angle of attack which is profitable for them.Â

And Mark acted. As he didn't consider sitting and passing turns to be a good strategy he decided to make the final brave attack. 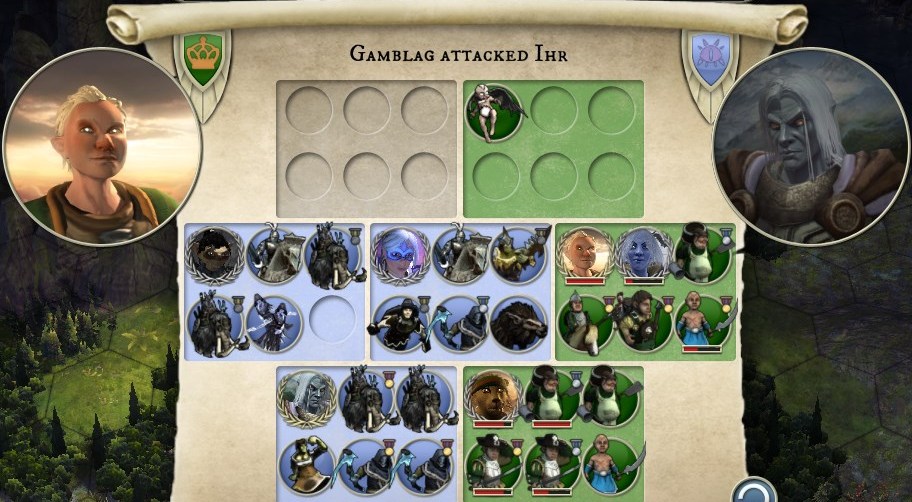 I showed this screenshot to my friends, nobody would make a bet on halflings.

Ah, you've just seen a spoiler here. Okay, time to reveal everything. Are you ready? 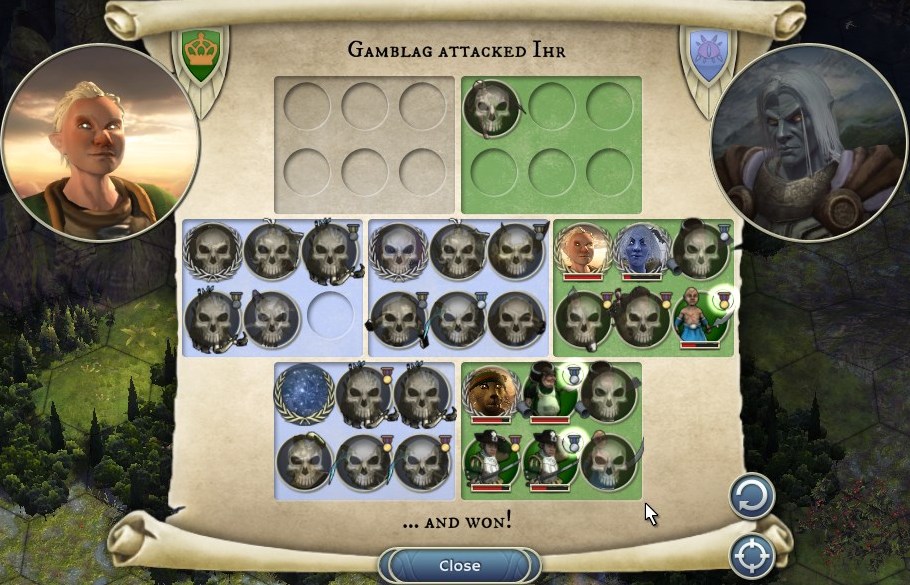 You can imagine the reaction of guys to whom I showed this result. I myself had to go out to breath some fresh air XD

I want to show you the video of this battle.
https://www.youtube.com/watch?v=9DBLGFwtZ3A&feature=youtu.be
Maybe you can enlighten me =) I'm certainly missing something.
Yes, Mark had good moral + lucky from hobbits. But I had a stronger army, completely buffed by such things like melee, charge, defense commands, blood honour and poison knowledge. My heroes were much better trained with some powerfull artifacts making their defense high.

But I lost the fight. And I might have lost the game. I have a very strong suspicion I missed something crucial here and, if it is so, I must learn this lesson. Never play like this, guys.Â

upload failed, not know, if i get a reload notification. 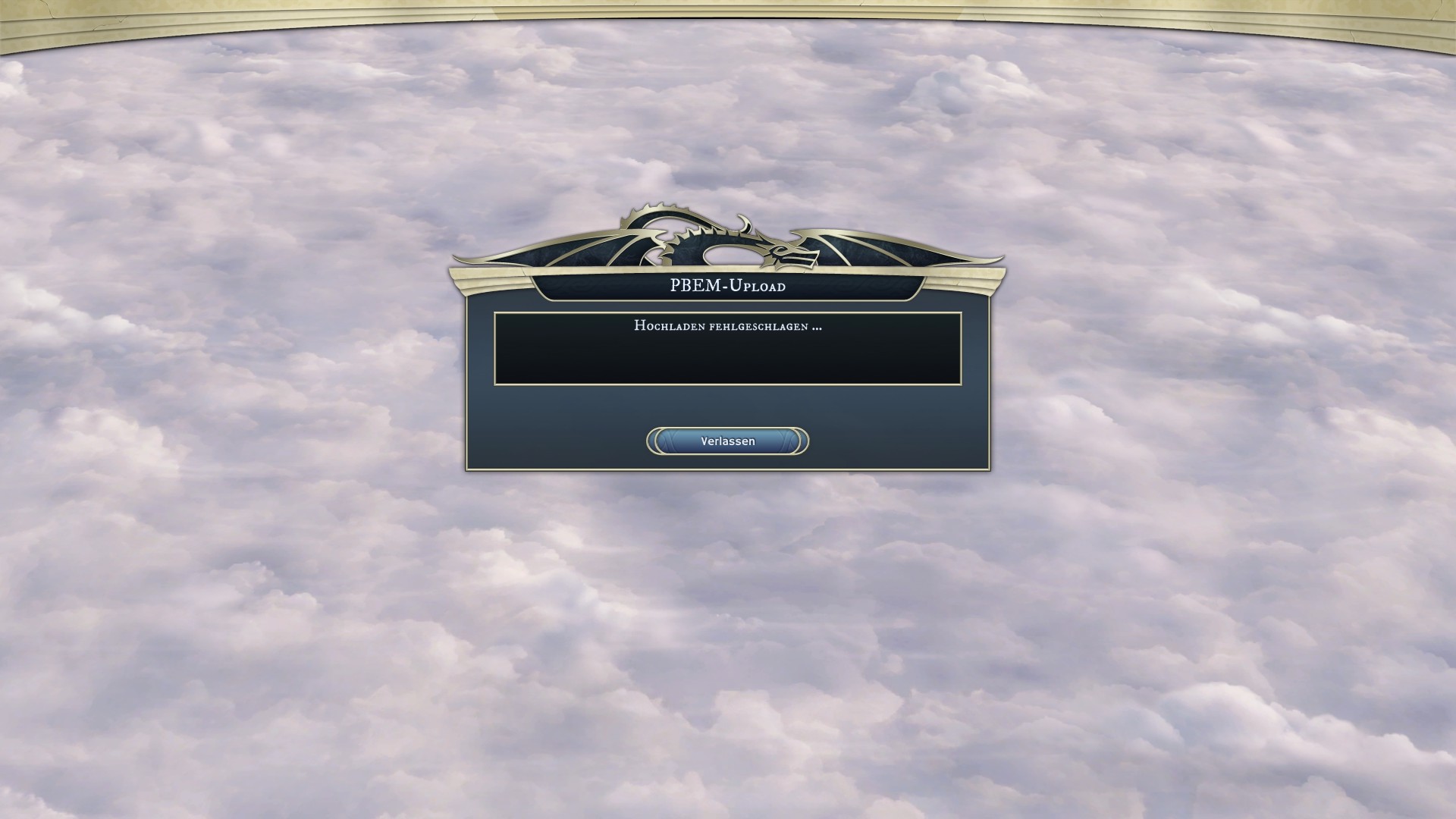 Game is up and here are the screenshots of the settings.Â
Good luck, Marky! 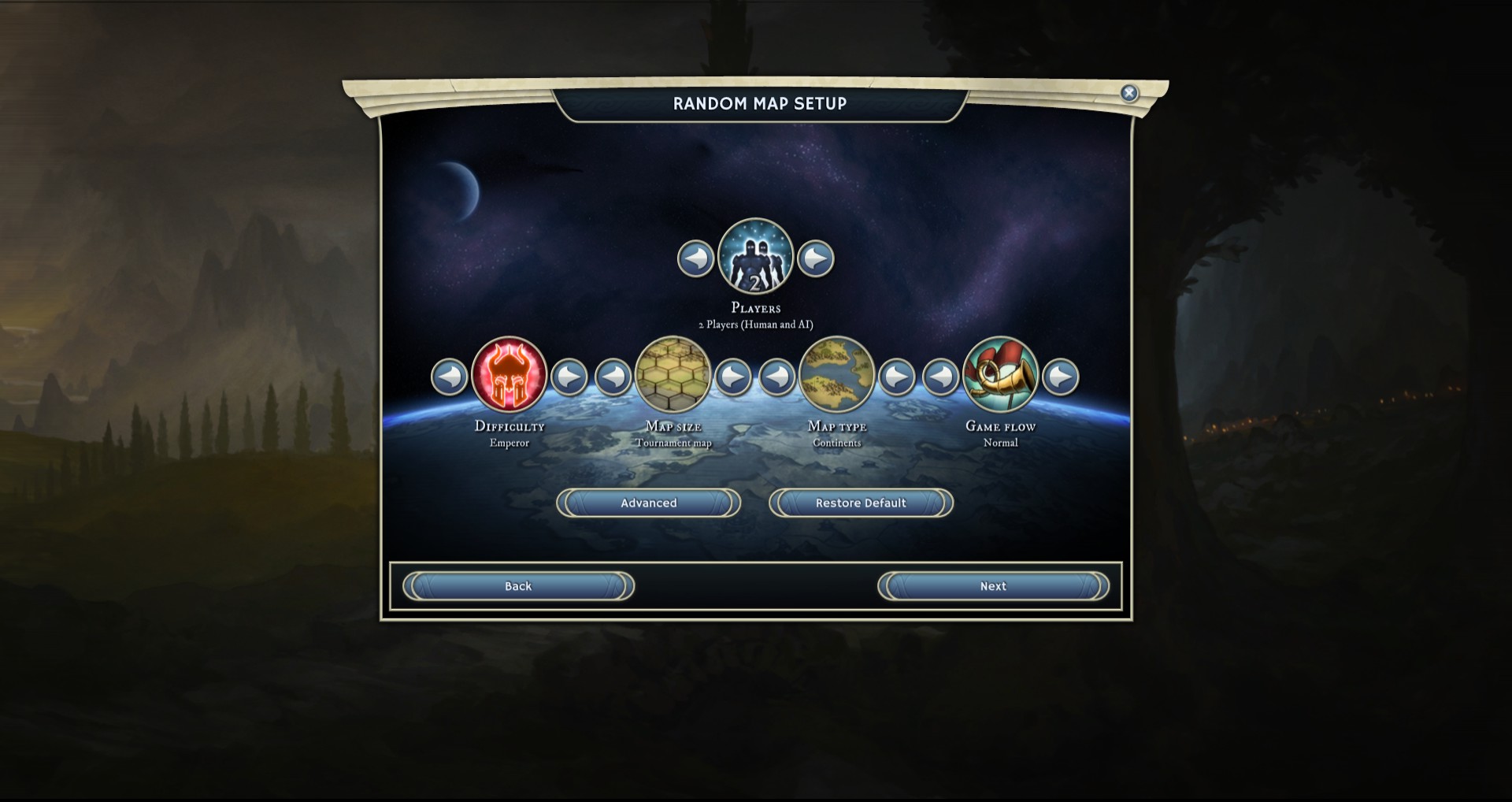 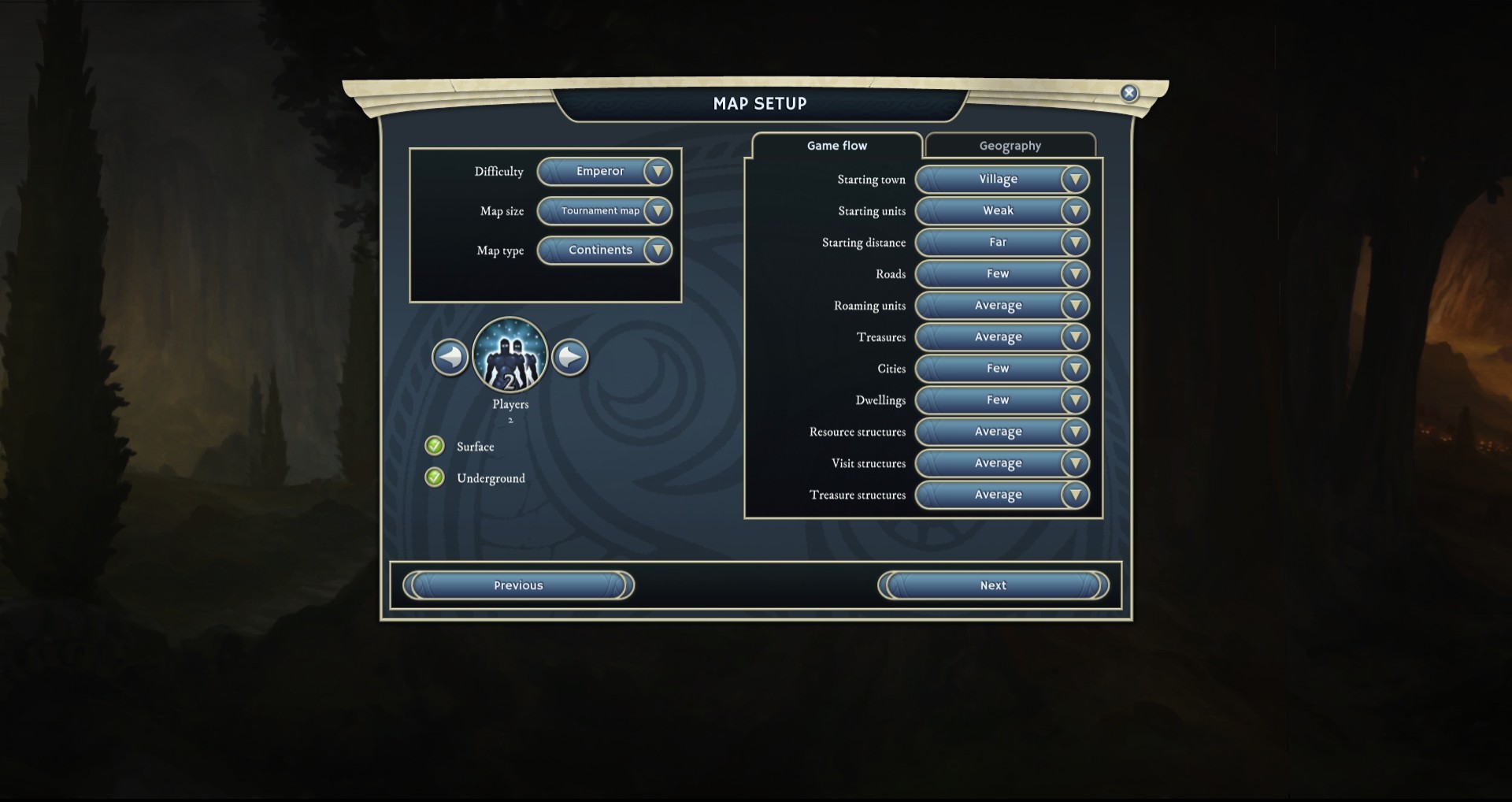 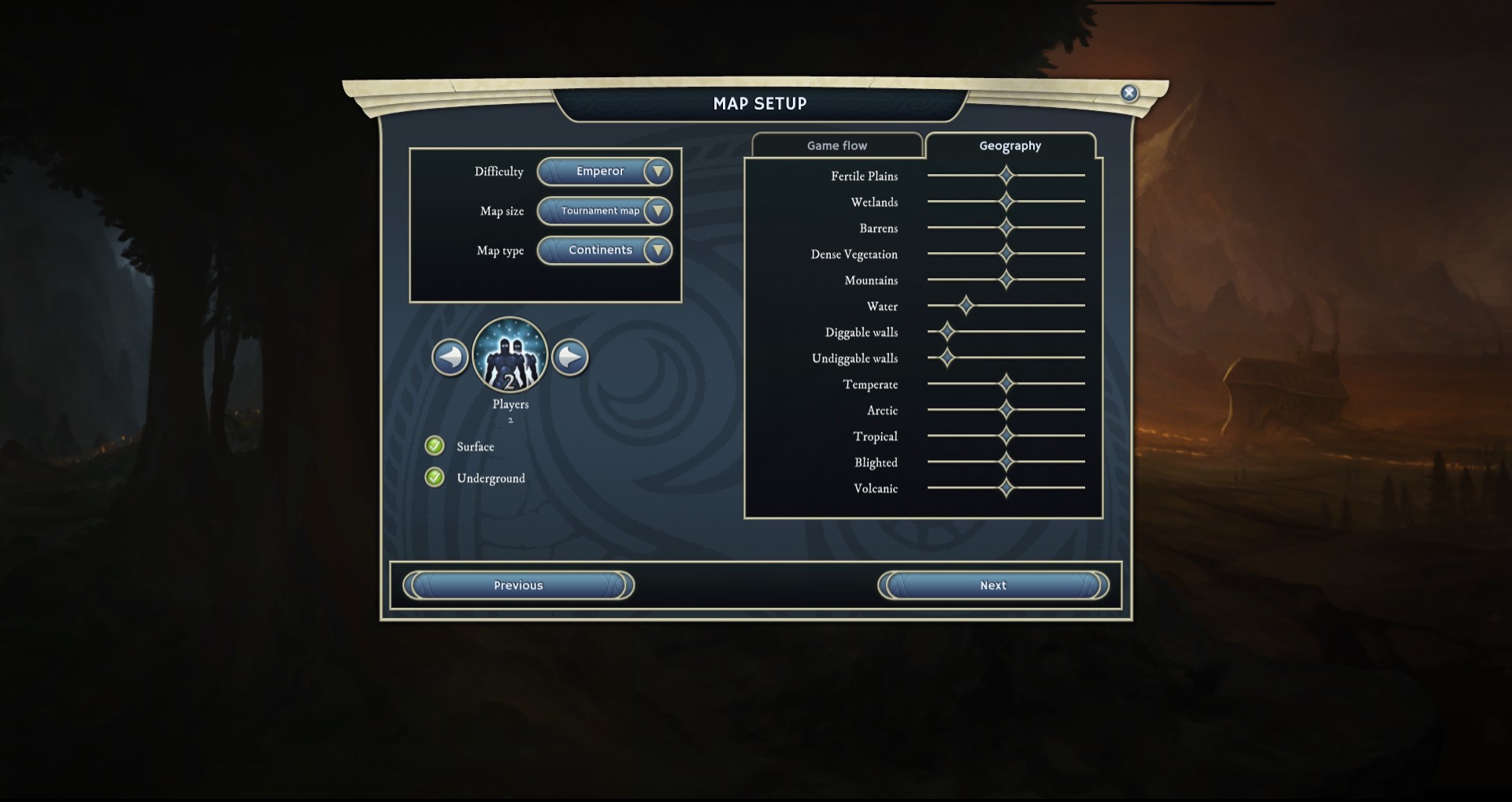 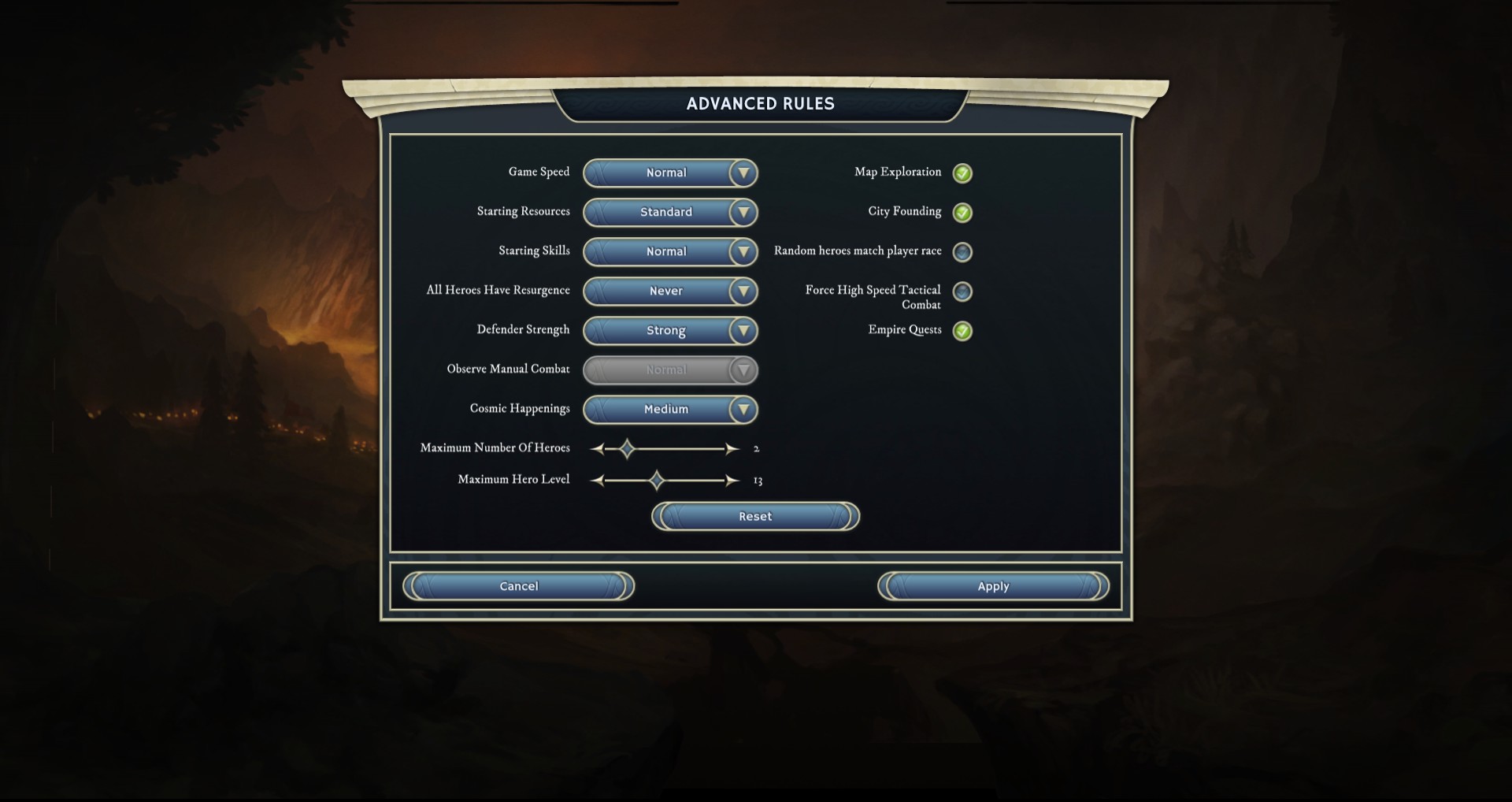 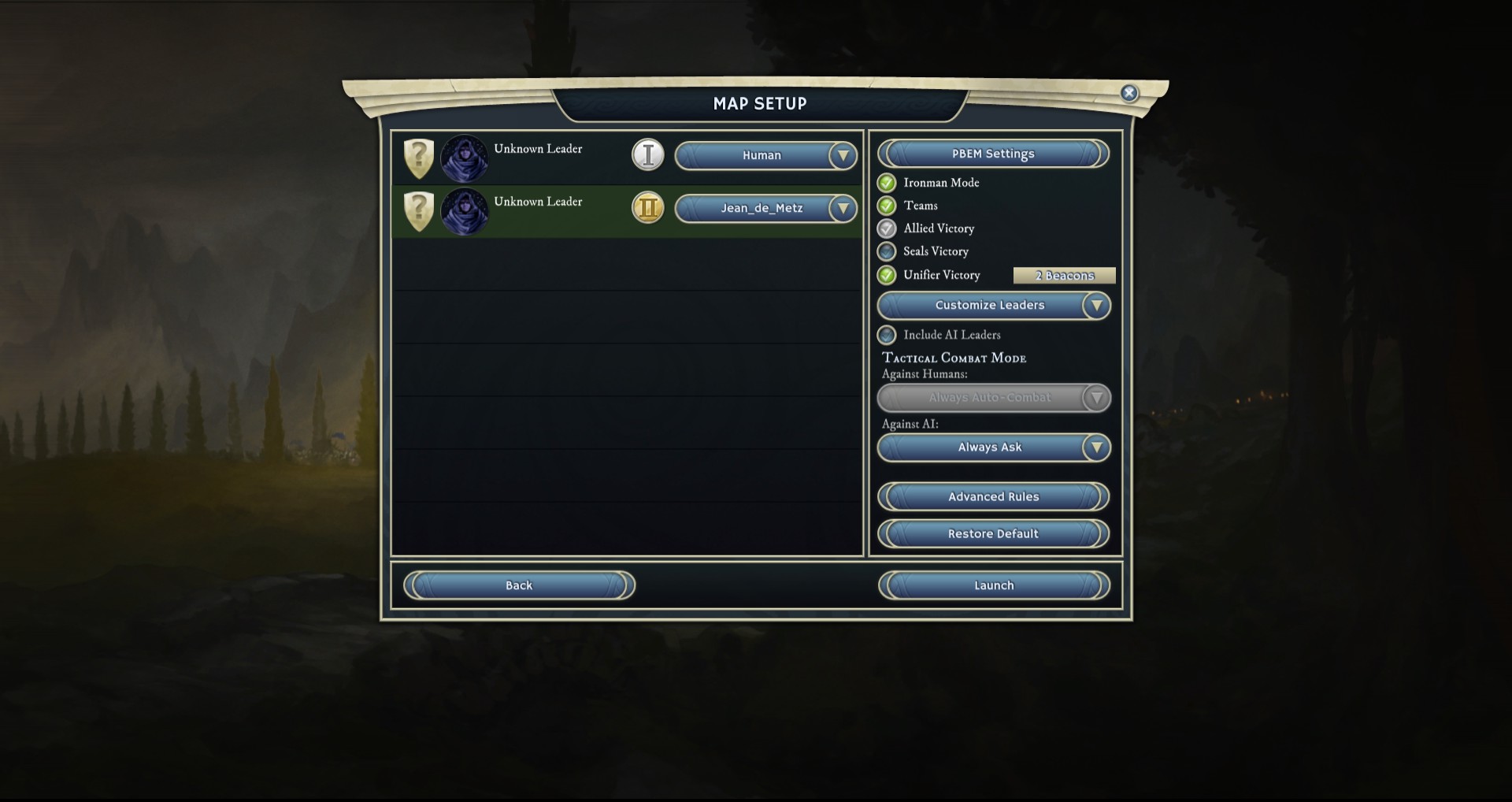 Any of the players in the team can host. The host must play in #2 position in the turn order (please check rules for more details).
Tournament Game #14 Round 1 !

Hi there! You both sent your class/race. Now Jean needs to host and posts screenshots here then you can start.

Good luck & have fun in the 1st round!