PBEM and Single Player Balance Mod v1.2 about to be released (Community)

With more than 8 months of experience of use for Single Player, casual PBEM and competitive PBEM, the PBEM and Single Player Balance Mod has reached maturity. A new major step is about to be achieved with its future v1.2 and v1.21 release which will bring significant new improvements to ensure choices before the game (race, class and specialisations) provide equal chances to enjoy the game (and win!) and make choices during the game matter more, as well as to increase fun and diversity in an already very rich game! v1.2 should be released in January in the beta branch of the balance mod http://steamcommunity.com/sharedfiles/filedetails/?id=758212846 and will be released on the main balance mod http://steamcommunity.com/sharedfiles/filedetails/?id=661597466 only after several days/weeks of tests. Focuses of v1.2 are: specialisations, high-level sites, mind-control, Necromancer, healing and polishing previous balance efforts.

More than three months after the previous release of the PBEM and Single Player Balance Mod, v1.18 (see article), a new step in the refinement and balancing of AoW3 is on its way: v1.2. The change of first digit (v1.1 to v1.2) indicates some significant changes which will bring more depth to strategic decisions and tactical fights and will also strengthen and make more exciting some specialisations which are currently lacklustre.

Key improvements:
- weak and unexciting specialisations (Earth, Wild Magic, Water Master, etc.) get boosted by small incremental changes (e.g. cost reduction or addition of effects such as +1 defence to units in domain for Domain of and Empire of spells) and more radical additions of penultimate spells (e.g. a "Dark Storm"-like spell for Air Master which would reduce vision range for enemy units). 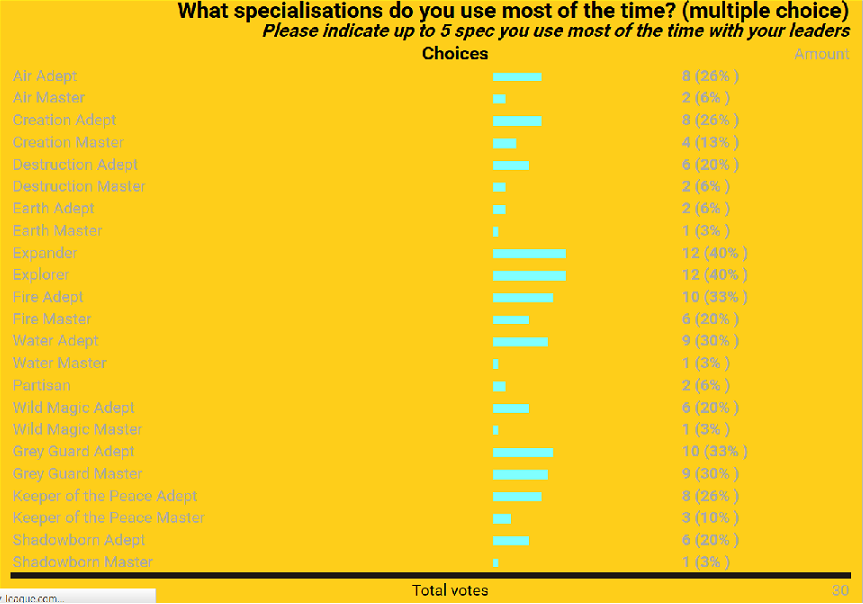 Results of a poll conducted on the Battlefield.com in May 2016 to spot weaker specialisations: What specialisations do you use most of the time? (multiple choice)

- risks and rewards are balanced for high-level sites: battle enchantments are added where they were lacking for the most difficult, i.e. Legendary and Mythical, sites so that these sites are not easier than lesser, Epic, sites such as Tombs or Lost Libraries. Rewards of Legendary and Mythical sites are re-adjusted in accordance with their high risks so that weak items are no longer proposed as rewards.

- key balance efforts from previous versions of the mod are polished based on experience gathered over several months using the mod: several loopholes linked to mind control are closed, tactical combat exploits linked to Necromancer are limited, Death March is further balanced, Halflings are boosted a little more...

- a few other highlights: Healing becomes once per battle (first for heroes in v1.2, then for all units in v1.21, though Theocrat's units are compensated), mind-controlled units cost more in upkeep to create a strategic trade-off for mind control strategies, Rogue heroes are boosted to make guerilla tactics more viable (stack concealment is cheaper and a new movement boost leadership ability is added).

Several of these changes are not present in v1.2 in its initial release, but should be released shortly after in v1.21 and following releases.

The aim is to release v1.2 on the beta branch of the mod as soon as possible so that it is then released quickly on the main branch of the mod and is available for the 2017 PBEM Duel Tournament which is planned to start on 30 January (delayed from an initial start date of 15 January).
v1.21 should be released 1-2 months after v1.2 on the beta branch.

Please note that the PBEM and Single Player Balance Mod needs help with modding! If you're a modder and you're interested to help improve AoW3, please contact Hiliadan.

What's next?
The balance mod is made by and for the community so its development team (Zaskow and Hiliadan) will be listening to the community for its evolution in the coming weeks/months. Changes proposed in the past (for instance regarding Dreadnought and Halflings) will be re-assessed and a convergence with the live multiplayer balance mod will be considered.
Authors of great graphical and "ease of play" mods will be contacted to consider merging their content into the balance mod to make life easier for users (e.g. instead of having to load the Racial Unit Reskin mod + the balance mod, the content of the former could be included in the latter, and users would have to load only one mod).
Upgrades from the Racial Governance system, Empire Quests (see discussion about Multiculture and the more general issue of the weaknesses of multi-races strategies) and strategic spells (currently too expensive to be interesting compared to summons in most cases) would be obvious candidates for rebalancing but such balancing will be conducted only if the community is interested in them.


For information, please also find below the changes confirmed for v1.21 so far and keep in mind that the list is incomplete and will be edited in the coming days/weeks!

Changelog of v1.21 (to be completed)
General
- Transform Mana Node can target any Mana Node (was can target only basic - i.e. non elemental - Mana Node)

Partisan (specialisation)
- Guerilla Tactics apply to all units (was only Infantry and Irregular)
- War Anthem costs 20 CP to cast (was 30 CP). If it fails, the unit suffer -100 morale instead (was no effect if it failed). 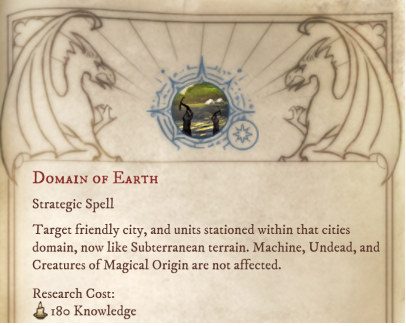 Have you ever thought this spell is very very situational and cannot be used in most cases? Well, not anymore with the changes that will be brought by the balance mod (see below)

Comments on the article

You have the full changelog on that GoogleDoc (updated each time a new version is about to be released): https://docs.google.com/docum...
The link is also in the article "see full changelog of the balance mod"
I would like to add all what brings the balance mod in the Wiki but it's a huge work, especially if we want to have in parallel what is the official version and what is in the balance mod. If someone is interested to help in that work, we can discuss it and implement it together.

Is there a complete list of the abilities for the latest version?  I'm looking for something that shows new stats and level-listing, similar to what was once published on the AoW3 wiki (http://age-of-wonders-3.wikia.com/wiki/Age_Of_Wonders_3_Wiki).  Thanks.

v1.2 has been implemented on the beta branch.

For GoG users, you can find the .taf here: https://www.dropbox.com/sh/qv...

It should be released on the main branch on January 30 more or less.

Very good start for a new year. When will 1.2 released for testing?