You love AoW3 and you would like to improve your experience even further? Then have a look at the list of top mods in this article! They have been selected by the community and submitted to a vote. The must-haves are Racial Class Unit Reskin from Tibbles, the Racial Heritage Mod from Eomolch and the PBEM and Single Player Balance Mod from Zaskow and Hiliadan. These mods bring beautiful new graphics for existing units, new units for each race and more fun & balance for the game. The article also have a look at the results of recent polls on the favourite classes of the community, the classes considered the worst for the starting hero and the games of Triumph played by the community.

AoW3 is a very rich game with about 400 units, more than 400 techs and 400 unit abilities and few players have played all its class or races. All this variety is further enhanced by a plethora of mods designed by the community to improve graphics or increase their customization, add new units/spells/buildings/abilities/etc., improve the ease of use of the game or improve existing assets of the game by making them more fun and more balanced. 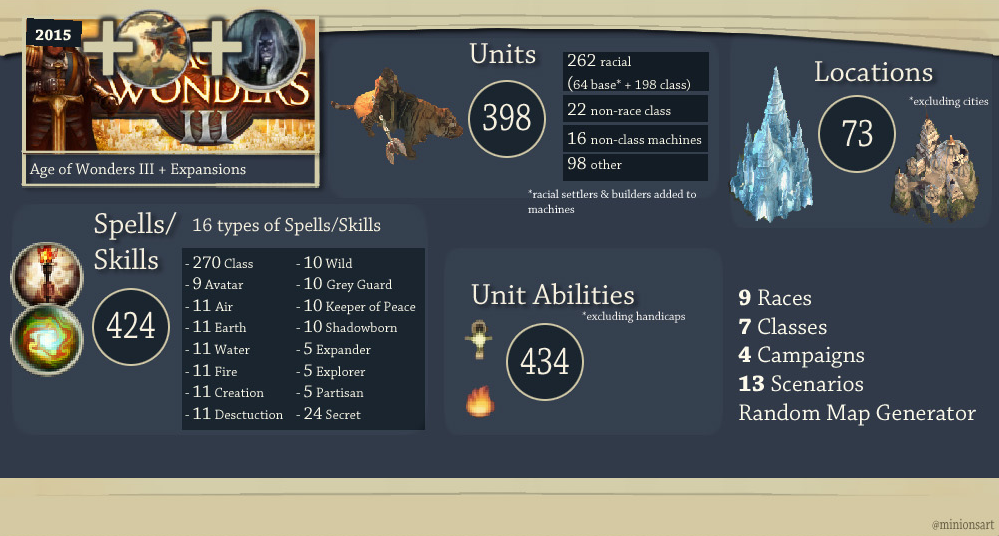 Chart of the Age of Wonders series in numbers, compiled by Tibbles (full chart can be found on the official Triumph news)


How to navigate all these mods?
A shortlist of 20 of the best mods was drafted with the help of the community on the Steam forum. These 20 mods were then put to a poll open to everyone for a month and a half until the end of January 2017. 62 votes were cast, electing the best mods of AoW3! This list should help you to find the best mods and select the ones most appropriate to your style and wishes.
Of course, this list does not include mods created around January 2017 or later, so do not forget to experiment with new mods that may not have been well-known when the poll was run! 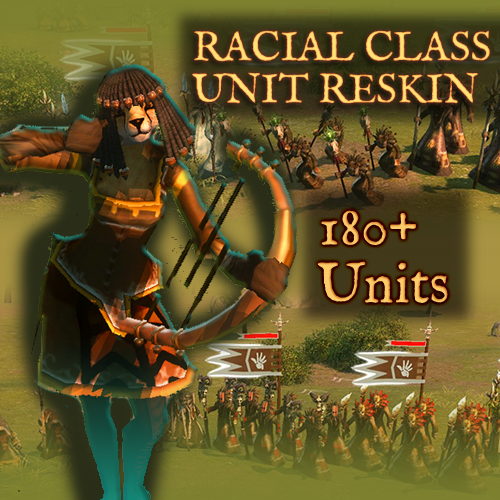 Category: Visuals
The top mod on the Steam Workshop with more than 13,000 subscribers, the Racial Class Unit Reskin came also first of our ranking! More than simple reskins, this must-have mod from Tibbles significantly improves the appearance of all race-specific class units (so machine and non-racial Undead excluded), making each race's units really unique and recognizable.
Please note that for ease of use (and with the permission of Tibbles), this mod is going to be included in the PBEM and Single Player Balance Mod (see below), which means you will need only to activate the Balance Mod to benefit from the Class Unit Reskin mod. 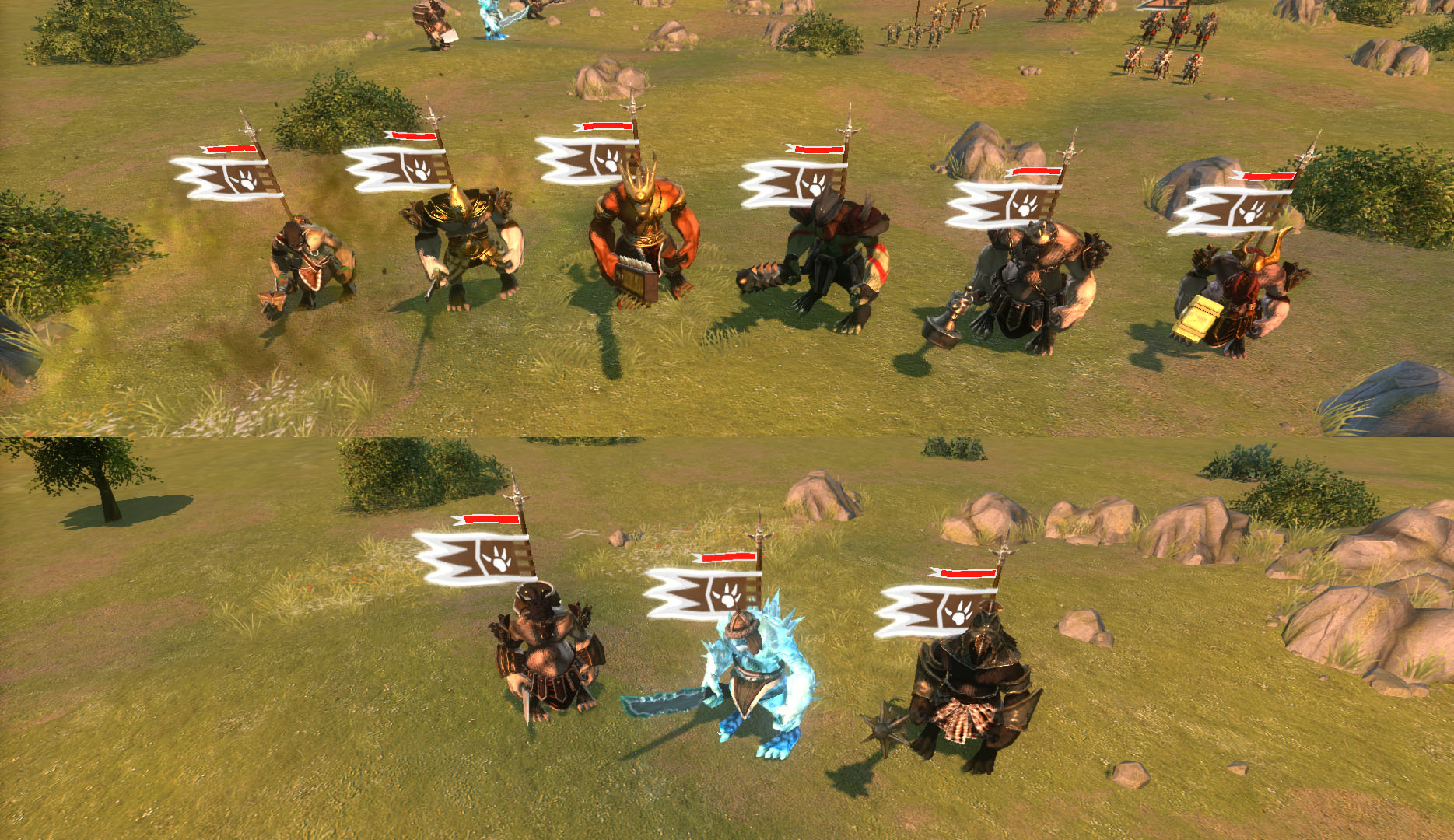 New racial models of the Warlord Warbreed (by Tibbles) 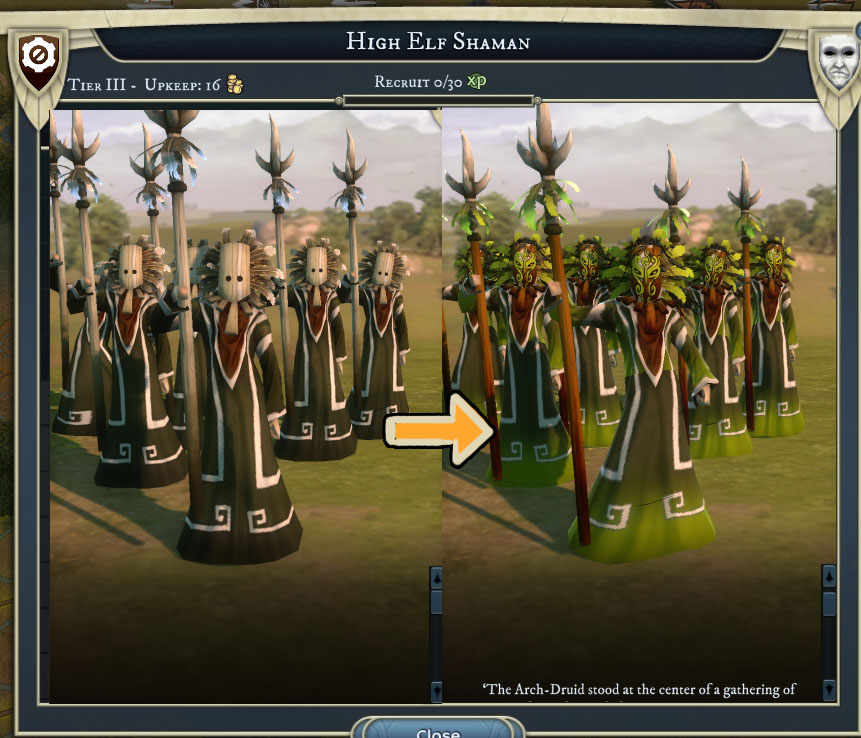 High Elf Shaman before and after the improvement (by Tibbles) 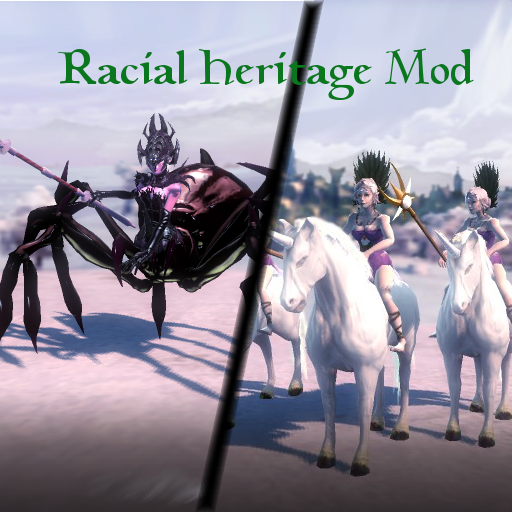 Category: New content
One of the most successful mod adding new content to the game (others include the Empire Building mod â€“ below in the top -, City Building mod â€“ not in the top â€“ and the Hero mods from the same author), the Racial Heritage Mod deepens the alignment concept and brings two sub-factions for each race, one good and one evil. Each sub-faction brings two new units to the game, as well as a production chain including in general four new buildings. In total, the mod thus brings 4*9 = 36 new units to the game, which you will face at independent sites and that you will be able to build in your cities. Each faction has a very specific gameplay and flavour, greatly enhancing the game experience.
Together with the Hero Development, the Hero Profession and the Old Man & the Sea mods (see lower in the ranking), Eomolch created content worth a new DLC for the community. 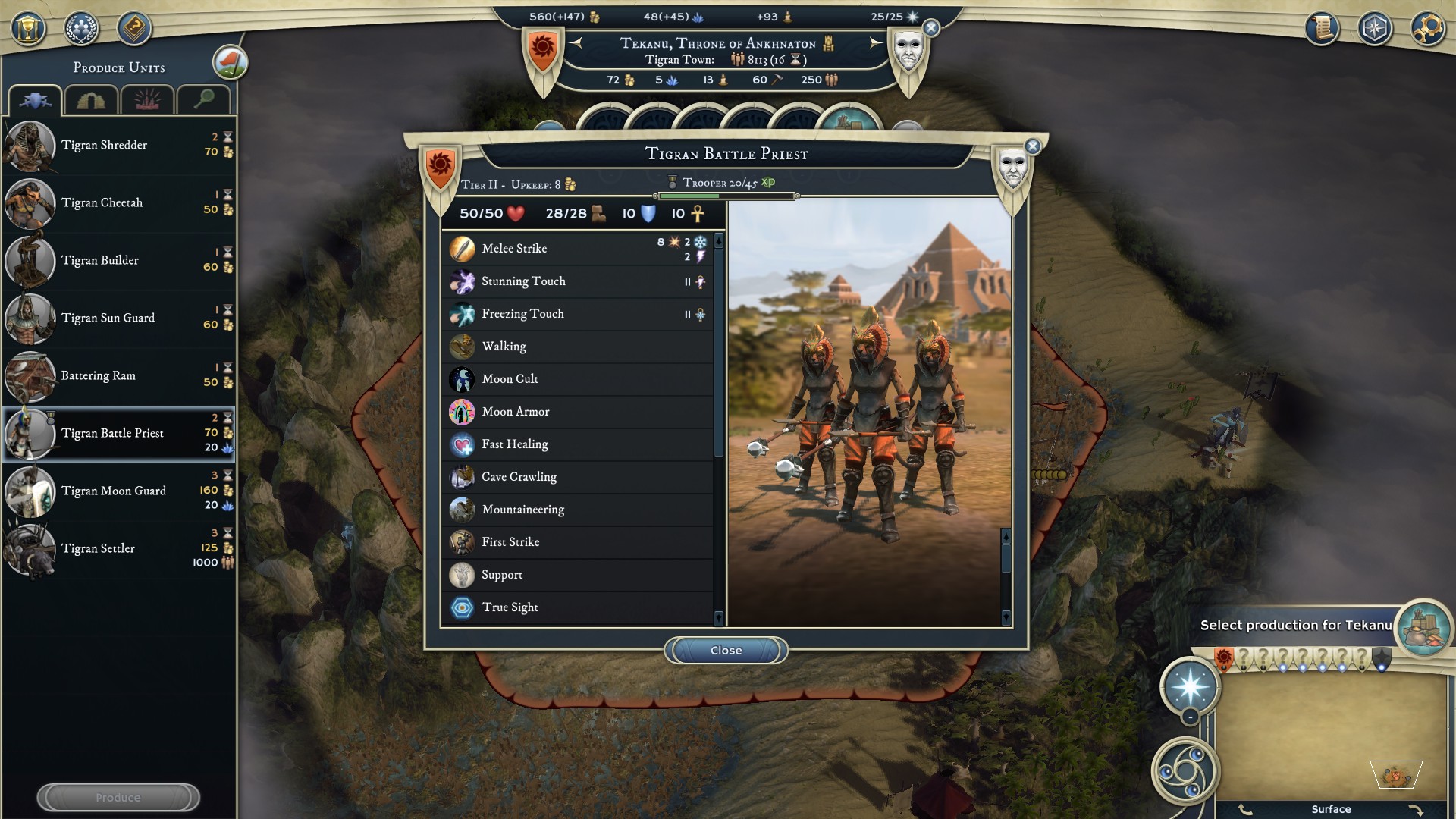 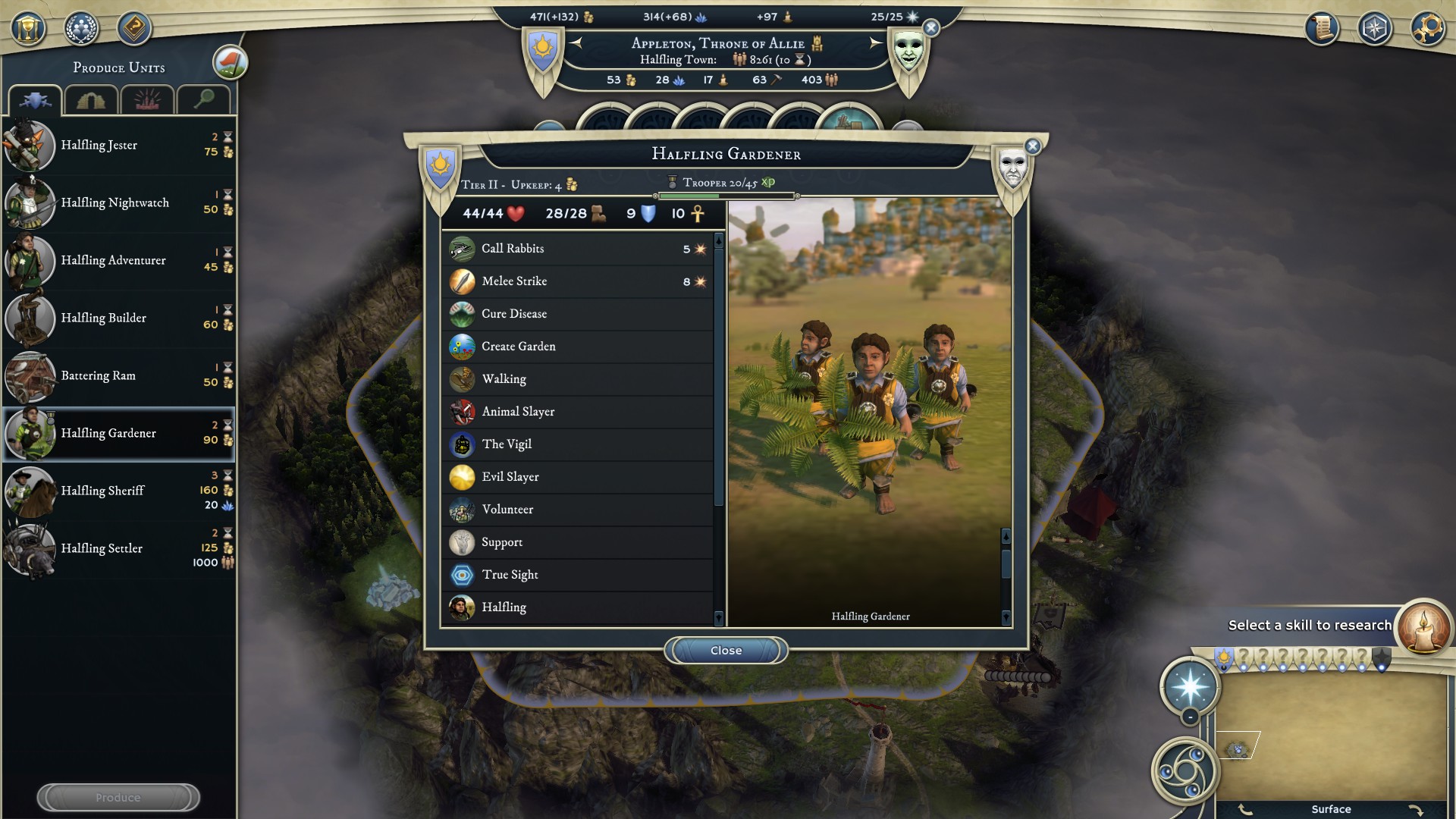 Halfling Gardener, from the Good, The Vigil Halfling sub-faction (by Eomolch)

Category: Visuals
This mod by iHunterKiller replaces the standard Watchtowers on the strategic map by race specific Watchtowers, embellishing the strategic map. Simple and efficient, it ended up third of our ranking.
Please note that for ease of use (and with the permission of iHunterKiller), this mod is also going to be included in the PBEM and Single Player Balance Mod (see below), which means you will need only to activate the Balance Mod to benefit from the Racial Watchtowers mod.
SEPTEMBER 2017 UPDATE: since v1.8 Poseidon, the Racial Watchtower mod suffers from a bug that prevents Builders from building water Fortresses. This can be fixed by using the PBEM & Single Player Balance mod, which includes a fixed version of the mod (see #4 below). 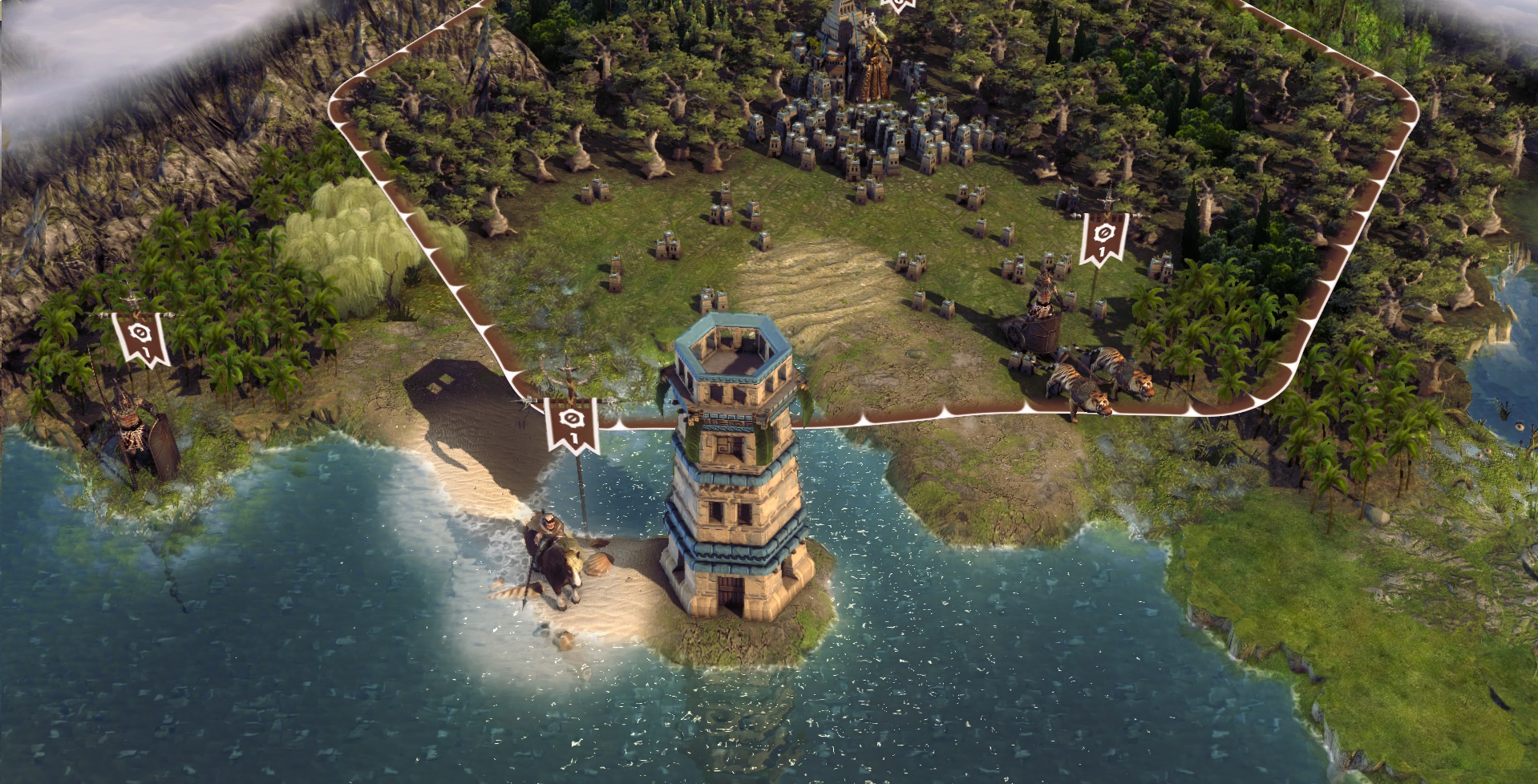 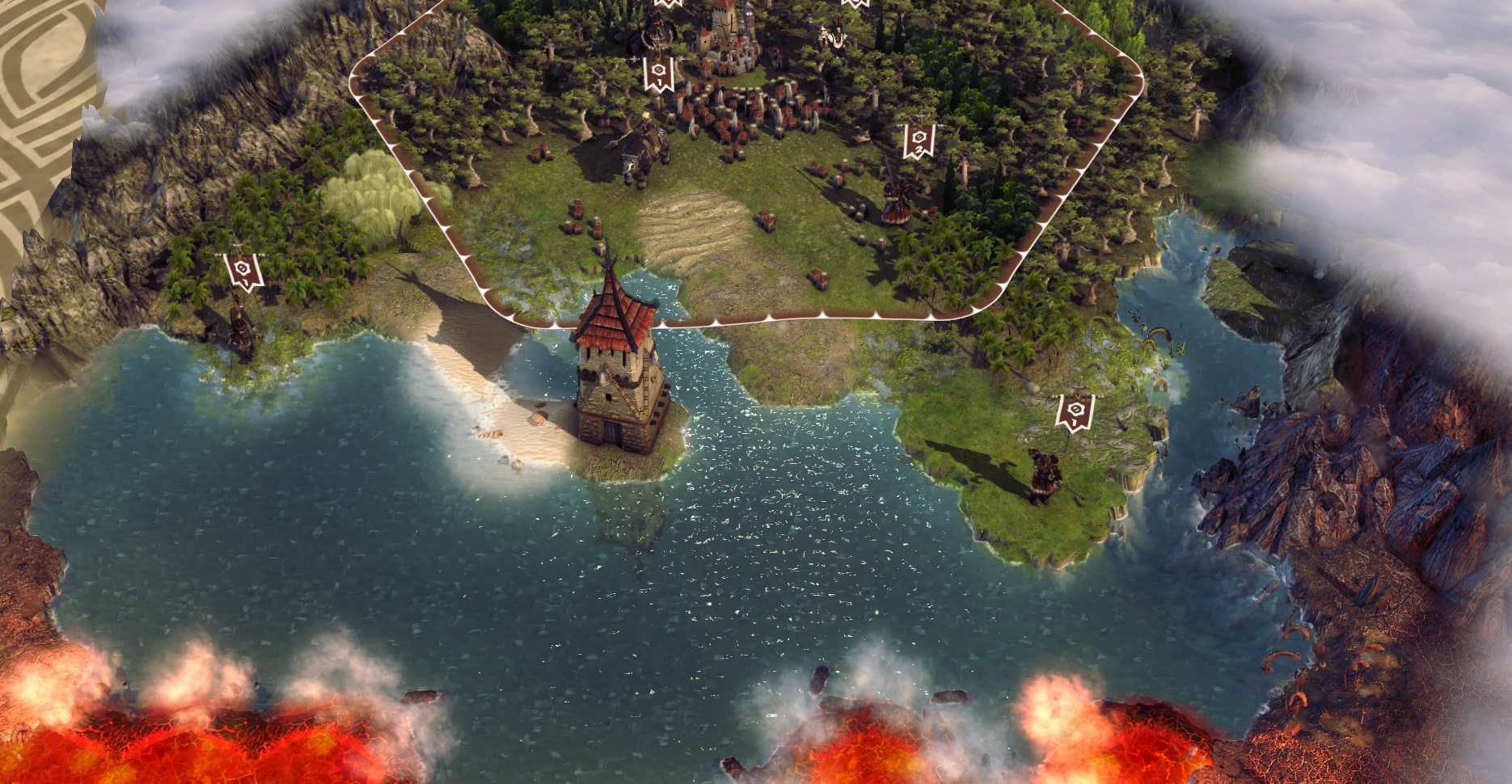 Category: Balance, New content, Visuals
This mod is the result of extensive and long-term work by the AoW3 community to improve the game by making it both more balanced and more fun to play with all races, classes and specializations, started in early 2016. It includes many new and reworked ability and techs (e.g. a Fortifying Meal for Halfling Brew Brother that synergizes with Halfling Farmers by allowing them to Throw Chicken again, a new Cloaked in Shadows tech for the Partisan specialization which makes units Invisible for 1 turn, etc.), making Dreadnought and Halfling more enjoyable and interesting to play, Necromancer more balanced, lacklustre specializations such as Partisan, Earth, Air Master, etc. more interesting. The full changelog is available on a dedicated page.


Two branches of the mod co-exist: a beta-branch to test new version and a main branch which receives versions successfully tested in the beta branch.


Changes are designed both by (through a discussion process with many players which ensures only needed and coherent changes are brought) and for the AoW3 community, with both Single players and PBEM players in mind. With Triumph having stopped balancing the game, this mod aims at being the new "base game" for all players. As such, it includes the Racial Class Unit Reskin and Racial Watchtower mods (#1 and #3 of our ranking) with the permission of their authors, which means players using the balance mod benefit from their visual improvements without needing to separately download and launch them (first these two mods have been integrated only in the beta branch of the balance mod, they will soon be included in the main branch too). Other must-have mods will be added to the balance mod on a case by case basis.


Two articles explain why PBEM players and single players should use the PBEM balance mod and introduce the latest version of the balance mod, v1.2 and v1.21.

A video showcases the improvements brought by the balance mod: 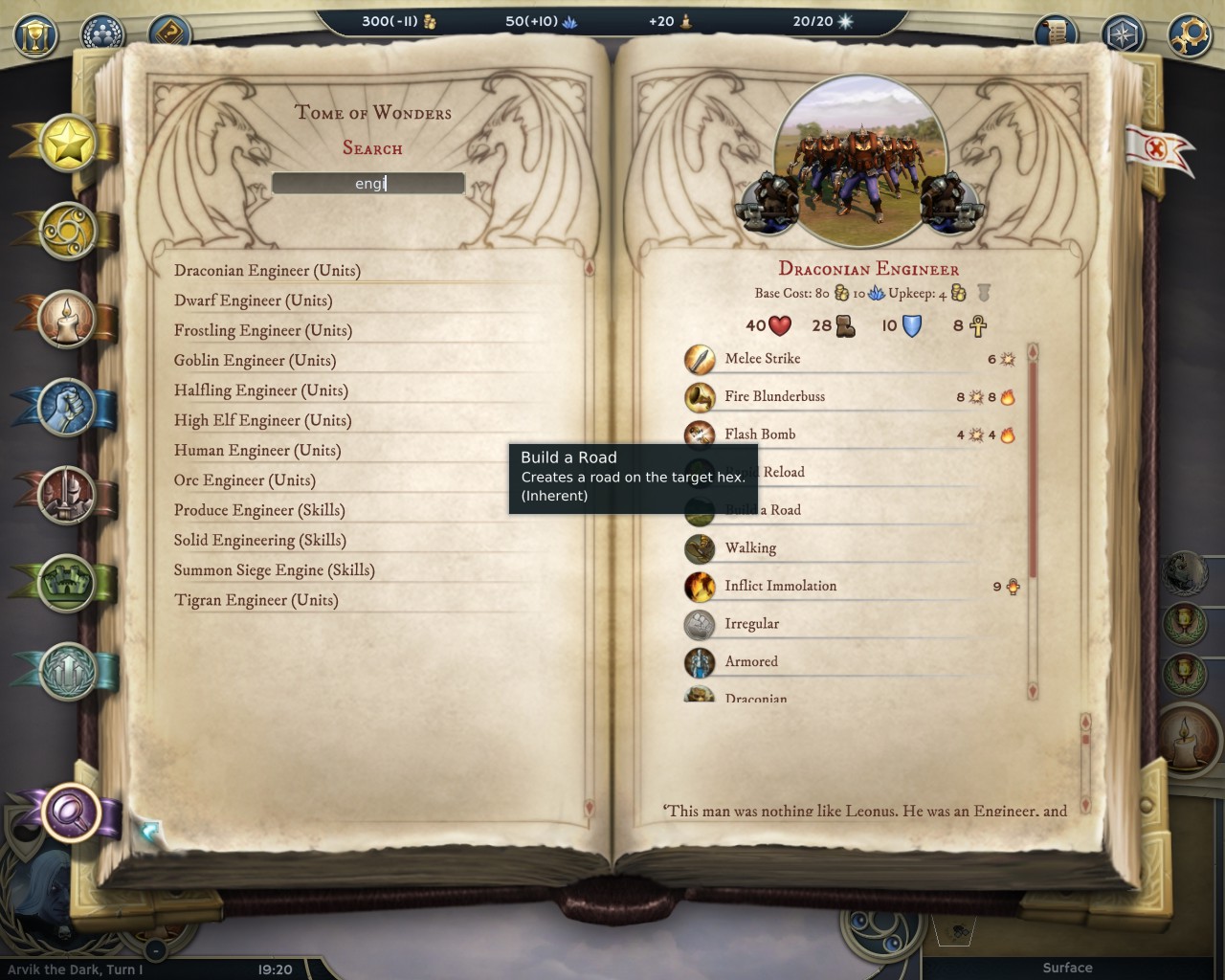 Engineers are boosted and can now build Roads, as well as fire Flash Bomb (stronger than Flash Bang)

Category: New content
Another mod bringing content almost worth a new DLC, this rich mod from The Mentat brings new building chains (also modifying existing ones), new units, a revamped hero upgrade system, new combat spells, etc. The Empire Building mod really provides a new experience of AoW3 and increases the "empire building" part of the game. It is very well developed with a very complete and well-illustrated manual and a translation in German (in addition to English). 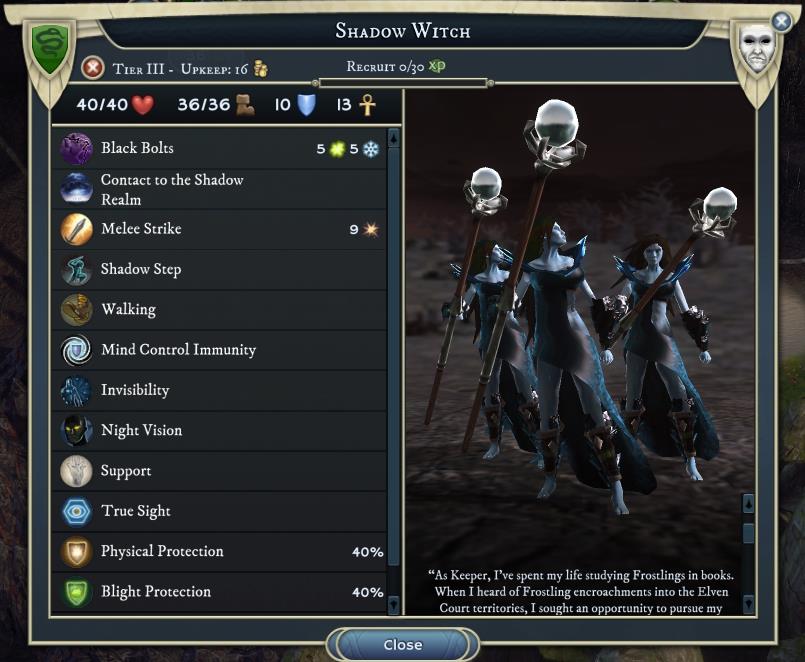 Shadow Witch, one of the 27 alternative racial unit of the mod (by The Mentat) 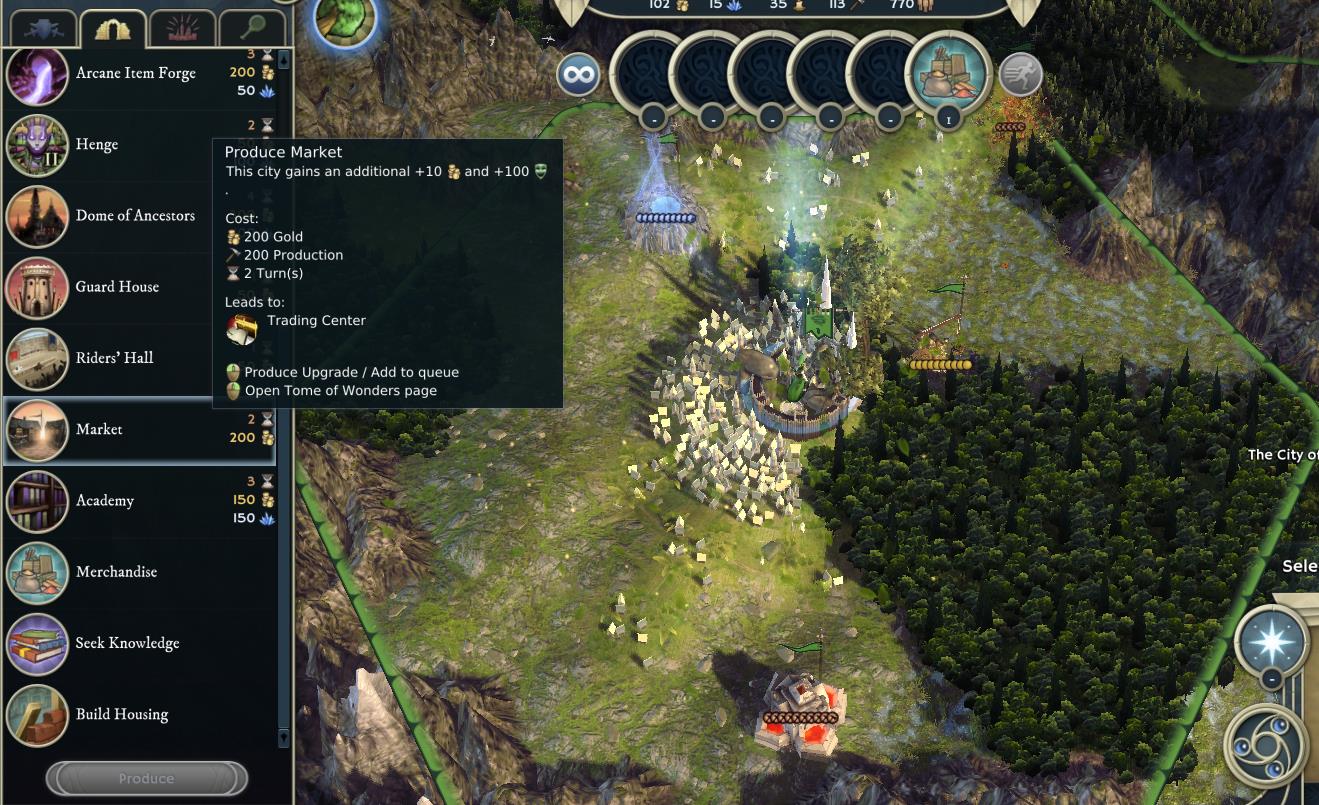 Some of the new buildings deepening the empire building aspect of the game: Market and Academy (by The Mentat)


#6 - Hero Development Mod - 11 votes (18%)
Category: New content
Eomolch cleverly revamped the hero upgrade system, adding 3 specialization to each class and race-dependant upgrades, which means that each hero is now more unique, having both race specific upgrades and a specialization (melee, range or support) which can lead for instance to 2 Rogue heroes in your army with totally different skills and roles. A manual is available.
Another mod, Hero Profession mod, did not make it into the top 10 (it ranked #13) but is also worth a look, in combination with this mod.


#9 - Age of Wardrobe Extended - 10 votes (16%)
Category: Visual, Customization
Sylverite brought more background and a few new hairstyles for our preferred leaders. For those looking for more leader customization, the Decodence - Leader Customizations (#15 in the ranking) is also worth a look.
SEPTEMBER 2017 UPDATE: this mod does not work on some computers and crashes AoW3 on the first loading screen. There is no known fix. You can try the mod and see if it runs on your computer or not...


The rest of the shortlist of best mods
#11 - More Colors for Coat of Arms - 9 votes (15%)
Category: Visual, Customization 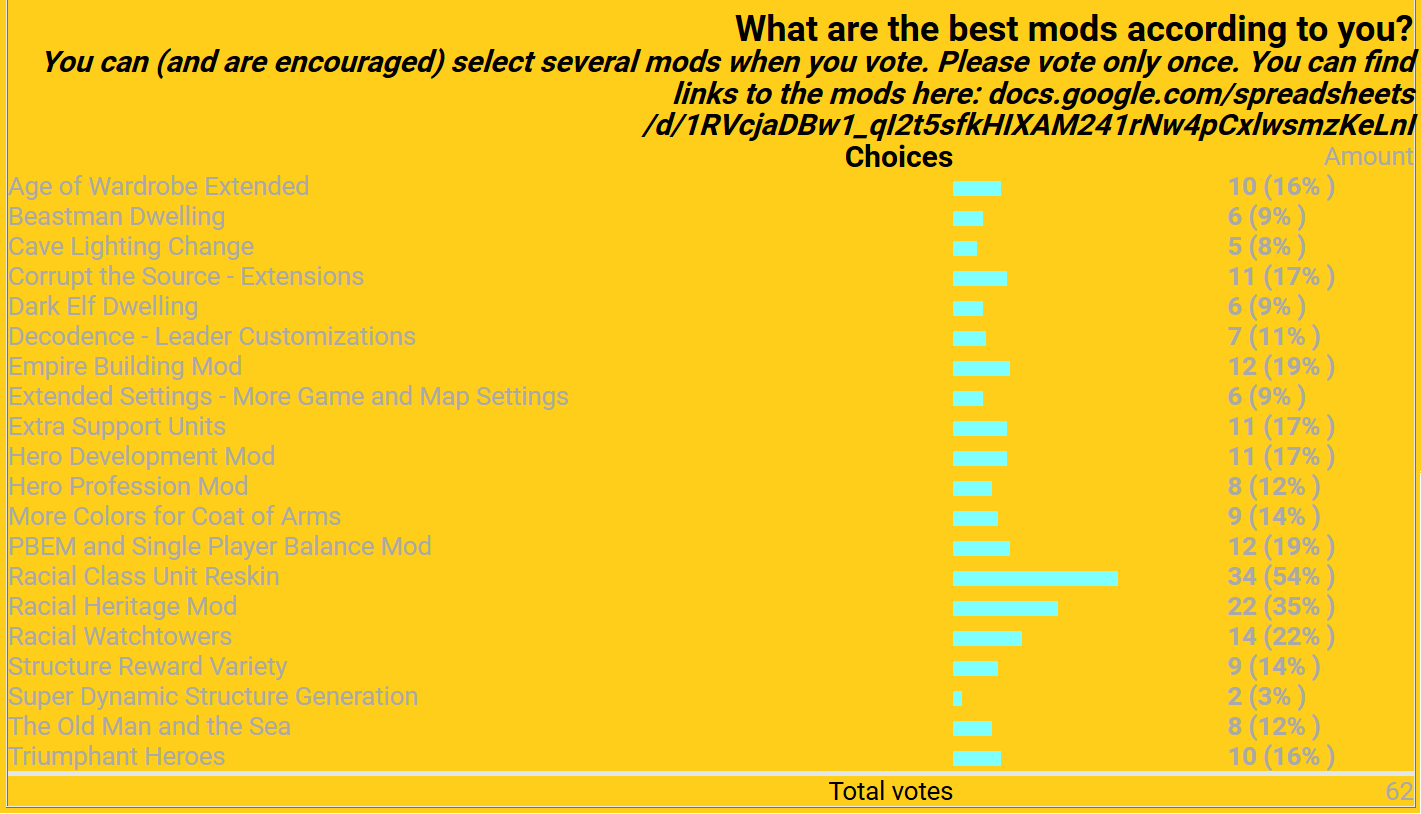 Full results of the poll about the best mods for AoW3


Other polls were also run in recent months, their results are displayed below. 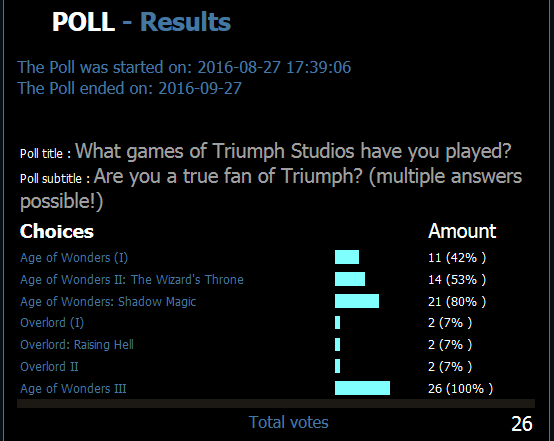 
Most players registered on the Battlefield.com/aow3 (registration was necessary to vote for this poll) never played the Overlord series and most of them discovered AoW with the Shadow Magic title, as many as 80% of players played Shadow Magic (and apparently liked it so much that they later bought AoW3!).


Voters could only vote for one class for that poll (open only to registered users on the Battlefield) and very interestingly, no class got more than 21% of the vote, demonstrating the good work of Triumph which created classes for all tastes and equally interesting, with no class dominating the others. Arch Druid, Necromancer, Rogue and Sorcerer are preferred and Dreadnought is relatively unloved but overall, all classes fit the playstyle of some players.


The first hero you get can be quite important for the rest of your game and sometimes, it may be worth refusing a bad hero (e.g. refusing a Rogue if you are playing Tigran Rogue and you want some healing). The results of that poll indicate that Necromancers, Theocrats and Arch Druids are the prefered starting heroes, never or almost never refused. By contrast, Dreadnoughts and Warlords are rejected by many players, who probably dislike the lack of good early game or late game abilities from Dreadnought and the lack of real healing or support leadership abilities (e.g. elemental resistance or morale bonus) from Warlord. The results would probably be very different if the question was about the second hero proposed.


If you want to learn more about the Battlefield.com/aow3, the community website for AoW3, please read this article.

Comments on the article

The article was updated with information about bugs on 2 mods: the Racial Watchtower mod and the Age of Wardrobe Extended mod. See the two "SEPTEMBER 2017 UPDATE" texts in the article for more details.

By the way, you can find a list of mods on the Wiki: age-of-wonders-3.wikia.com/wiki/List_of_Mods