Interested in getting some insights into the strategies of some of the best players of AoW3? Want to know what they think are the best combos and units? This is the second of a series of 4 interviews with the players who qualified for the final phase of the 2015 PBEM Duel Tournament.

Fistandantilus is currently ranked #16 with 1020 points on the Battlefield, he is thus one of about 25 Veteran players of AoW3 (having reaching more than 1000 ranking points at least once). At his top, he was ranked #5 and he is probably currently under-ranked compared to his excellent PBEM skills following 2 defeats against Skuns453Lirik902 and 1 defeat against team Coup de GrÃ¢ce. Fistandantilus is the leader of the Italian team The Sinners and is a very good Archdruid (Tigran), Theocrat and Sorcerer player. Having won one of the 8 players sub-tournaments (check the Hall of Fame for the list of all tournament winners), he qualified for the final phase of the 2015 PBEM Duel Tournament. He lost his first game against Skuns453Lirik902 in a Theocrat vs Theocrat match, where he suffered a difficult starting position underground. After the defeat of Skuns against gabthegab in the second match of the final phase, Fistandantilus faced the Russian player a second time to try to qualify for the mega-final. This time, he played Archdruid Tigran and faced a Human Rogue, which proved inadequate for the map, which was cut in half on the surface by rapids (blocked water), significantly helping Skuns who benefited from Rogue's Flying and Floating units as well as Fairies from a Dwelling on his side of the rapids.

The three other players qualified for the final phase all answered the same questions which the Battlefield team asked them and their answers will be released soon. You can find the interview of Sjow in an article already published and you will be able to read the answers of gabthegab and Skuns453Lirik902 soon. 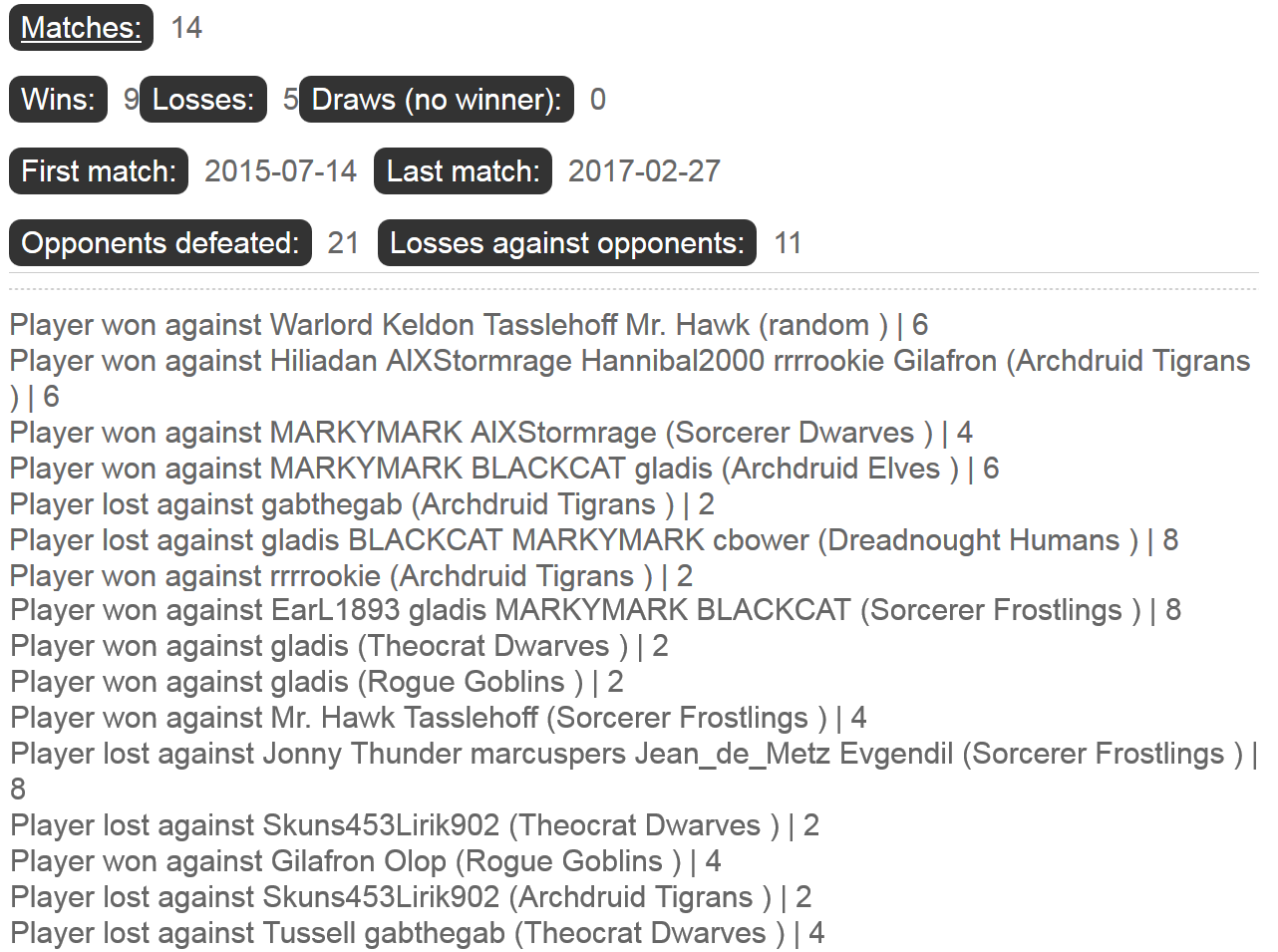 
1/ First a little background on your IRL (if itâ€™s not secret!): where are you from and how old are you?
Fistandantilus: I'm from Italy, 42 years old.

2/ When did you start playing AoW and AoW3?
Fistandantilus: As soon as it came out, which is 1999 I believe. At the time I was playing *a lot* of Sid Meier's Alpha Centauri PBEM and picked it up out of curiosity.
A few friends of mine (now on the Sinners Team) enjoyed the Warlords series and AoW shared a similar gameplay so I told them about the game and shortly after we were playing quite a lot of competitive PBEMs on the AoW Heaven site which was the main hub for AoW related things back then.
I did preorder AoW3 but it came out without PBEM support and I think I shelved it for a year or so after playing a bit in SP (the campaign was quite broken imho, I remember tedious turns moving dozens of Horned gods across a too big of a map, now it's improved greatly I believe). When the PBEM patch went out we all jumped back on the game.

3/ Do you usually play AoW3 in single player, PBEM or multiplayer?
Fistandantilus: 100% PBEM.
I finished the campaigns and didn't touch SP again. While I appreciate the effort I wish Triumph were bolder in campaign design. I'd like to see broken stuff, fun powerful abilities and big bonus given to the AI to make things interesting, the Blizzard approach taken for example in Starcraft and so on is the way to go to me, you do not care about balance in SP, the code word is fun.
Playing SP in AoW is too similar to MP against an opponent you can easily abuse, not my cup of tea. I'm afraid to say the AoW main competitors do a better job regarding the SP experience.

4/ How did you choose your combos during the tournament?
Fistandantilus: More or less random. I didn't play a race or class twice cause I like variety so I ended up playing almost everything (except necro, they were and maybe still are OP and I don't like playing popular/easy classes).
[Editor's note: see more stats on the top combos in the meta statistics of the Battlefield]

5/ What is your favourite class/race and why? With what specialisations?
Fistandantilus: I'm partial to Frostlings for lore and cuteness and I'm a mage at heart so Sorcerer. Grey Guard is too powerful imho so I end up selecting it way more than I'd like to.

6/ In your opinion, what are some of the best units by tier?
Fistandantilus: It's very hard to say as it greatly depends on situation (who you are fighting against, fast combat or not and so on) so I really cannot tell. I do believe there are very weak units though, for example I cannot stomach building Orc Razorbows.

7/ What was the hardest match you played in this tournament?
Fistandantilus: First match I played: ehall20, he knocked at my door on turn 12 with a couple of lvl 14 heroes (Necromancers) and a few 'ghouled' T3 and T4. I had to use concealment, several bonuses (great webbing on a stack ofÂ T1, heroes with undead killer and so on) and a sneak attack against his cities in the back to lure him out and force a decisive battle who went well for me. I think he got a little too confident and paid the price.

8/ What results do you expect for the 3 players in the final phase?
Fistandantilus: I expect gab to win easily and me to come in third place, I'm a bit rusty and quite burned out on AoW at the moment, plus Skuns is a great player.
[Editor's note: in the end, this prevision proved right!] 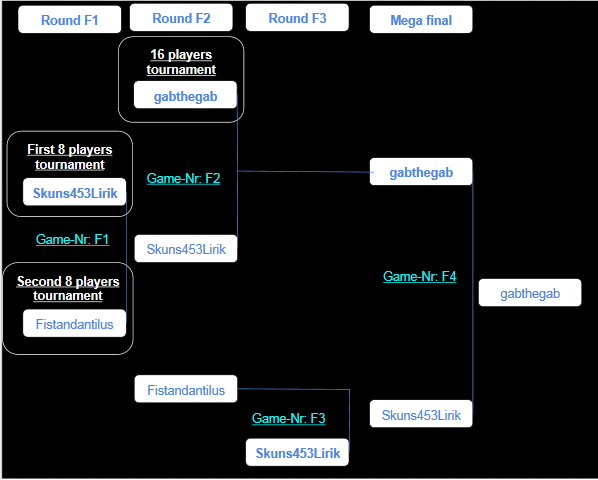 Roster of the final phase of the 2015 PBEM Duel Tournament

9/ Any advice for players who would like to improve?
Fistandantilus: Just watch Hiliadan instructive videos on YouTube!

If you're interested by more information about competitive plays, please check this piece of news: videos of competitive games


Comments on the article

Nice read and i would love to know more about this game vs ehall20 - sounds very interesting (:

I edited to precise that it was also thanks to a Fairy Dwelling, I had forgotten that.

Hiliadan wrote: "which was cut in half on the surface by rapids (blocked water), significantly helping Skuns who benefited from Rogue's Flying units".Â
It's not trueÂ

Â In my first avangard stack was only 2 rogue's units as I can remember - Shadow Stalker (with Life Stealing) and Succubus. All other units were fairies from my vassal dwelling. Without this flying stack with many excellent shooters I could have many troubles if I would try to start offensive movement with my main forces Â across narrow isthmus (because of those rapids through the map) on the surface
Published on 2017-04-03 22:03:44