Interested in getting some insights into the strategies of some of the best players of AoW3? Want to know what they think are the best combos and units? This is the first of a series of 3 interviews with the players who qualified for the final phase of the 2016 PBEM 2vs2 Team Tournament, which involved 16 teams.

Jean de Metz and Melciar formed "The green elephant" team for the 2016 PBEM 2vs2 Team Tournament. Outside the tournament, Jean is a member of the team King Serpents (ranked #2 of the team ranking), while Melciar is without team, but both have known each other for many years and used to play in the same community during the AoW2 and AoW2:SM era. Jean is one of the three "Masters" of AoW3 in the individual ranking and arguably one of the best PBEM AoW3 player ever. Melciar is a Veteran player, currently ranked #15, partially thanks to his team victories with Jean.
Both players speak Russian (Melciar is from Belarus), which definitely help them to play together, despite a huge skill imbalance and different personalities. 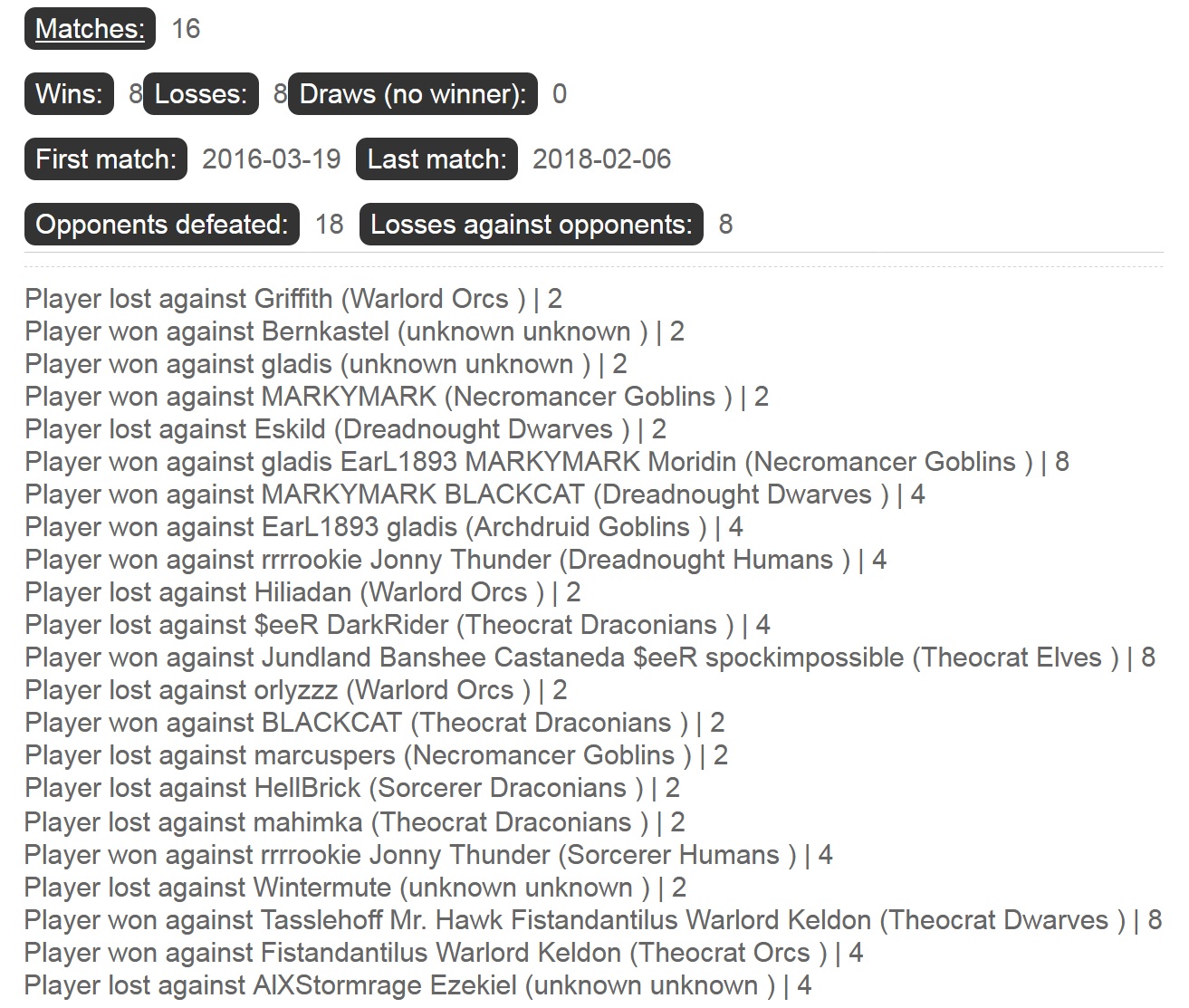 Melciar's stats: a respectable 68% win ratio, with a number of victories playing in team with Jean

Four interviews had been published for the 2015 PBEM Duel Tournament, you can find them here (check out their answers about the best units by tier, the answers are funnily always different):
- Sjow (4th)
- Fistandantilus (3rd)
- Skuns453Lirik902 (finalist)
- gabthegab (winner)

This is the first part of the interview, the second part can be read here as we were lucky to get a lot of content in the answers of Jean and Melciar!

1/ First a little background on your IRL (if itâ€™s not secret!): where are you from and how old are you?

Melciar: I started to play Age of Wonders 2 in 2004. Later I tried the first title of the Age of Wonders series. I have to tell you about a wonderful site, aow2.clan.su. Once it was a place where Age of Wonders 2 Russian fans used to gather and play with each other (now it is ancient ruins where archon undead units live). That solid online community appeared at the end of 2007 and games were held at least several times per week. Only online games. More players began to join us and soon we started to play tournaments. We had some foreign players too: Griffith and his brother Munatauras from Finland and Jeronimo from Argentina. Hellbrick and Jean came to play too. The former created MP Evolution mod which was pretty popular and was used even by foreign online players. The last tournament of this community was held just before the release of Age of Wonders 3. It was a good time, I would say.
Jean: It's a long story and I'm willing to tell it

When I was 10 years old my mother found out that a native German had just moved to our apartment block. He was a teacher of German language and he married a Russian lady. As he lived in the same house it was really convenient for me to go to his apartment once a week and study German. He was a good teacher, it was me who didn't study well =) I have to say I was more interested in sport events, books, friends and table games at this age than in studying German. I was really stupid. He later moved to another district of Moscow and I forgot everything he taught me.
His name was Oliver and he liked strategy games a lot. While waiting for his pupils to visit him, he played several turns in Heroes of Might and Magic 2. One day I came and saw him playing a very strange game. When I asked what its name was he looked at me seriously and replied: "Age of Wonders!" He didn't show it to me because we began to study and soon I completely forgot about it. Several years later I was passing by a PC games store (there was no Steam at that time and kids had to buy games in stores) and I decided to come in. I wasn't really interested in buying anything; I just loved to watch all those disks standing on the shelves. Suddenly I saw a game and it clicked in my mind: I remembered the name! It was Age of Wonders 2. The game was brand new, I bought it and soon it became my favorite game and stayed so for many years. Later I bought the Shadow Magic expansion. Of course, I tried the first part of the series - the game my teacher played. I liked it too, especially the soundtrack. I was very happy to hear it once again, now in Age of Wonders 3.
I played Age of Wonders: Shadow Magic online for many years. We had a hamachi network where we used to gather. There was a forum of Russian fans where I met Melciar, Hellbrick and many other good players. You should read Melciar's answer to find more about it.
I started to play Age of Wonders 3 when it was released in 2013. Unfortunately, I soon ran out of free time and made a long break. Now I'm playing PBEM and I'm a real fan of it.
Â
3/ Do you usually play AoW3 in single player, PBEM or multiplayer?

Melciar: I'm not interested in single player. At all. When I had more free time, I used to play online a lot. Now - only PBEM, with rare exceptions.

Jean: I play only PBEM. Online games take too long to play. One day I will play the campaign because I haven't played any of its scenarios at all. 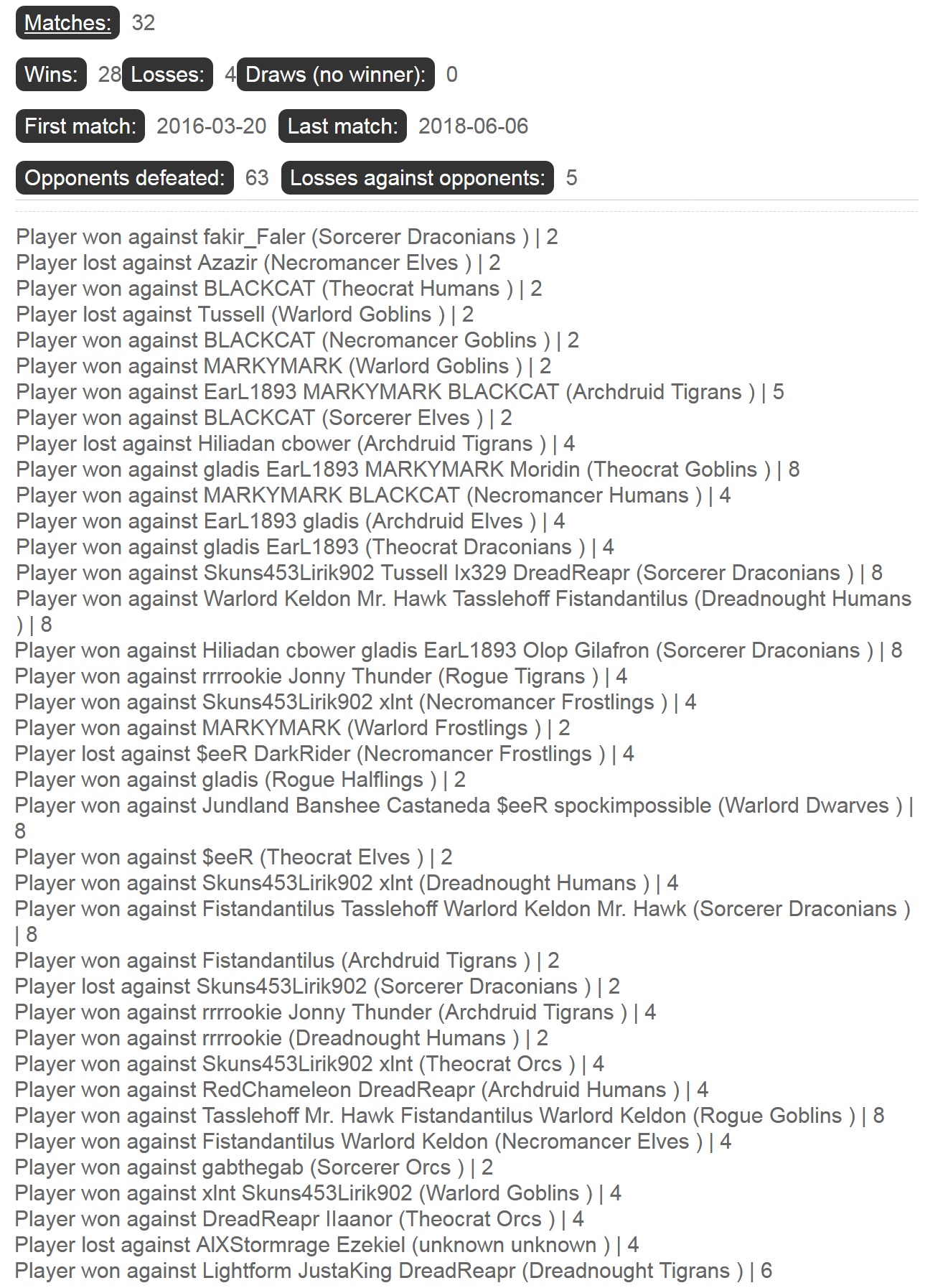 Jean's impressive strings of victories, leading him to a 88% win ratio!
Â
4/ How did you choose your combos during the tournament?
Melciar: My best combo - to team with Jean, haha. In fact, all my combos for this tournament failed to show good results. Maybe because I still consider myself to be an online player and I haven't got accustomed to PBEM yet.

Jean: Soon after I started to play in team with Melciar I found out how unprepared he was for this tournament. I had to show my best in almost every match in order to win it. Just to make sure: Melciar is a good teammate and a nice guy

But he has the same problems as many other new players: once he loses an army or a town he becomes upset, demoralized and makes more mistakes. He loses interest in a match very easily so you have to be nearby and tell him everything is okay and nothing bad has happened I took strong combinations in every match and got rewarded so far. Let's see if I manage to win my next match.
Â
5/ What is your favourite class/race and why? With what specialisations?
Melciar: My favorite class - Theocrat. Favorite race - Goblins. Specialization - Shadowborn. I consider its tier-4 units (Fallen Angels) to be epic and cool.

Jean: My favourite classes are Sorcerer and Dreadnought. Sorcerer has everything I like: Floating/ Flying invisible armies which give you an opportunity to outplay your opponents in maneuvers; perfect global spells (Glyphs of Warding, Dread Omen, Dome of Protection, Age of Magic, etc.) and really interesting battle spells. I like to play with Grey Guard as Essence Harvest gives you more casting points and its economic bonuses are really useful (you can't rely only on summons). You can also take Destruction in order to get Scorched Earth or Hasty Plunder. Sorcerer uses both spells very often since it is a very aggressive class.
As for Dreadnought, it became one of my favorite classes in online games. There you have to play a decisive tactical battle with your opponent on manual so Cannons, Flame Tanks and other class units are incredibly strong. In general, I like the variety of different tactical scenarios provided by Dreadnought. For example, it's very easy to take different mythical sites with units like Trolls, Shadow Stalkers, trained Spiders, etc. But imagine you don't have them. You have only several different Machines and Engineers to repair them. And every dangerous fight in a mythical site becomes a true challenge.
I like Human and Halfling Dreadnoughts. I'm currently playing a 3-3 game where I'm testing Tigran Dread and I believe it to be pretty good. Since Dreadnought has many different Empire Upgrades I recommend to take a specialization with no Empire Upgrades at all. Then you won't run the risk of getting wrong upgrades in the research book pools.
I often feel disappointed when I see players trying to avoid using Dreadnought class units at any cost. They build cavalry, support units or even try to level up elementals Yes, it shows how many strategies can be played by dreadnought class. But don't ignore these wonderful Machines. At least, they deserve a test.
Â
6/ In your opinion, what are some of the best units by tier?
Melciar: Best units? I prefer mobile units which you can get very fast at the beginning of the game. I also like Draconian Flyers.

Jean: It is a tough question. Let's start with some tier 1 units. You can find a Hunter Spider Baby guarding different objects at the beginning of the game. It is a very dangerous unit and many new players don't know how to deal with it. Imagine: you don't have any casting points or damage spells, you have to approach the defenders and you need to do it very carefully because one of the Spiders can teleport and Web your unit. It can ruin your whole strategy. Two minutes ago you felt safe and self-confident but now your hero is webbed and an Ogre is approaching it...
Another special unit for me is Dwarf Axeman. Very strong in defense, can approach Archers with physical damage and block them with Defensive Strike. Let's also name the Frostling Ice Scaper. It is probably the only tier 1 unit which can remove an enemy out of combat for several turns. Ah, yes, also the Farmer

The Halfling Farmer. I know that Hiliadan loves it too.
If we take tier 2 units, I'd name the Phantasm Warrior, the Banshee and the Human Priest. The latter is a perfect unit to tackle Undead and protect your creatures from mind control. If you have a stack of them you can easily take the Lich's Castle.
I have to say that I like almost all tier 3-4 units. My favorite ones are: Warbreed, Frostling Ice Queen and Shrine of Smiting (it is incredibly strong; sanctums guarded by it are the most difficult ones in my opinion).


If you're interested by competitive plays, please check this video library gathering most competitive PBEM and live MP videos.